San Francisco is one of the most exciting cities to visit in the United States. There is so much to do in terms of culture, entertainment and just hanging out. Even only one day there can be a fantastic and memorable experience.

How We Visited San Francisco

In October 2019, my wife Khadija and I were flying home from Fiji and took a break for a full day in San Francisco. We had been there many times, but not for several years, so we were looking forward to it. We arranged to visit with Marlene, our daughter’s best friend, who recently moved there from New York for a job. 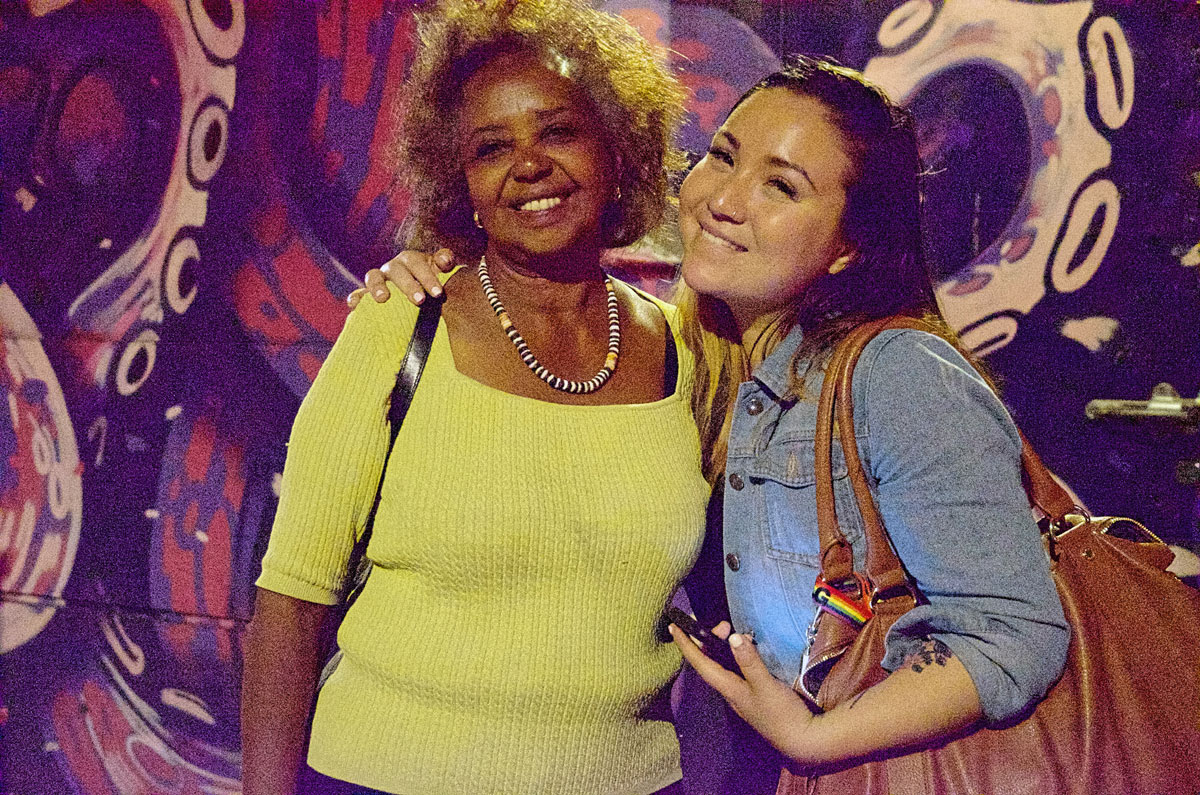 We had hundreds of options of what to do but ended up meandering to these places on the map. 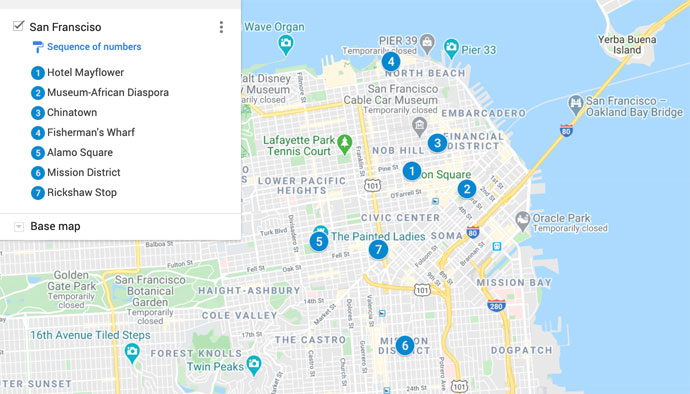 We stayed at the family-run Mayflower Hotel, which is centrally located in Lower Nob Hill and a good value in the city’s expensive hotel market. 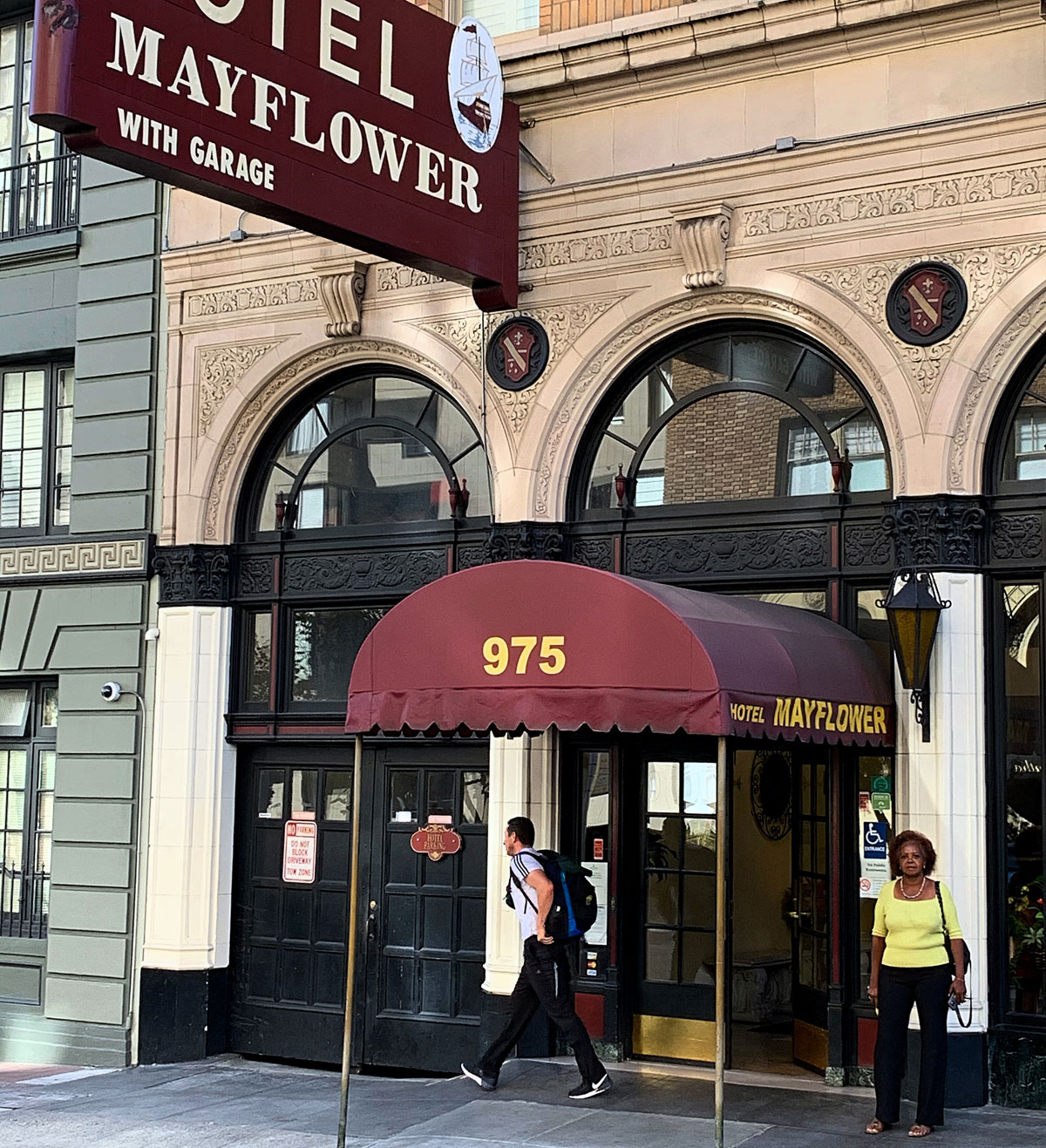 The hotel is representative of the Victorian architecture of the city and has charming hand-painted pictures of prominent sites in San Francisco in the rooms and hallways.

We walked most places but also took a bus and taxis.

The Museum of the African Diaspora, in the Yerba Buena district, exhibits works about African people and descendants around the world. It’s one of the more than 200 Affiliates which collaborates with the Smithsonian Institute, the sprawling museum and research organization owned by the U.S. Government.

We were lucky to see the photographic exhibition of “16 Shots” by South African photographer Musa N. Nxumaloof. The subject matter was disaffected South African youth in college protests and parties. One shot that really resonated was, “This is how you start a party!” showing two men spraying fire with aerosol cans. 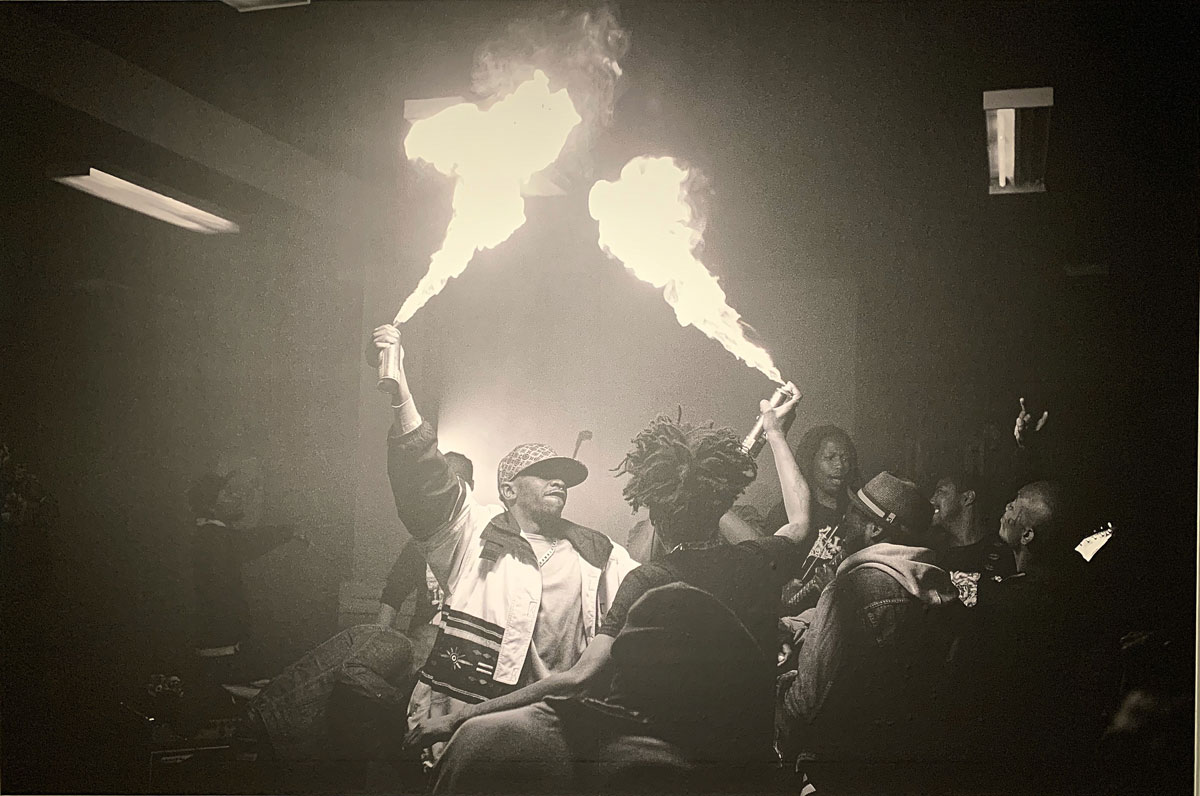 We spent about an hour admiring all of the current exhibitions and the permanent collection on display.

We wanted to view the streets of the city from a public bus, so we took one through Chinatown on the way to Fisherman’s Wharf. Khadija sat comfortably in the middle of the bus, while I was in the back by an open window photographing. 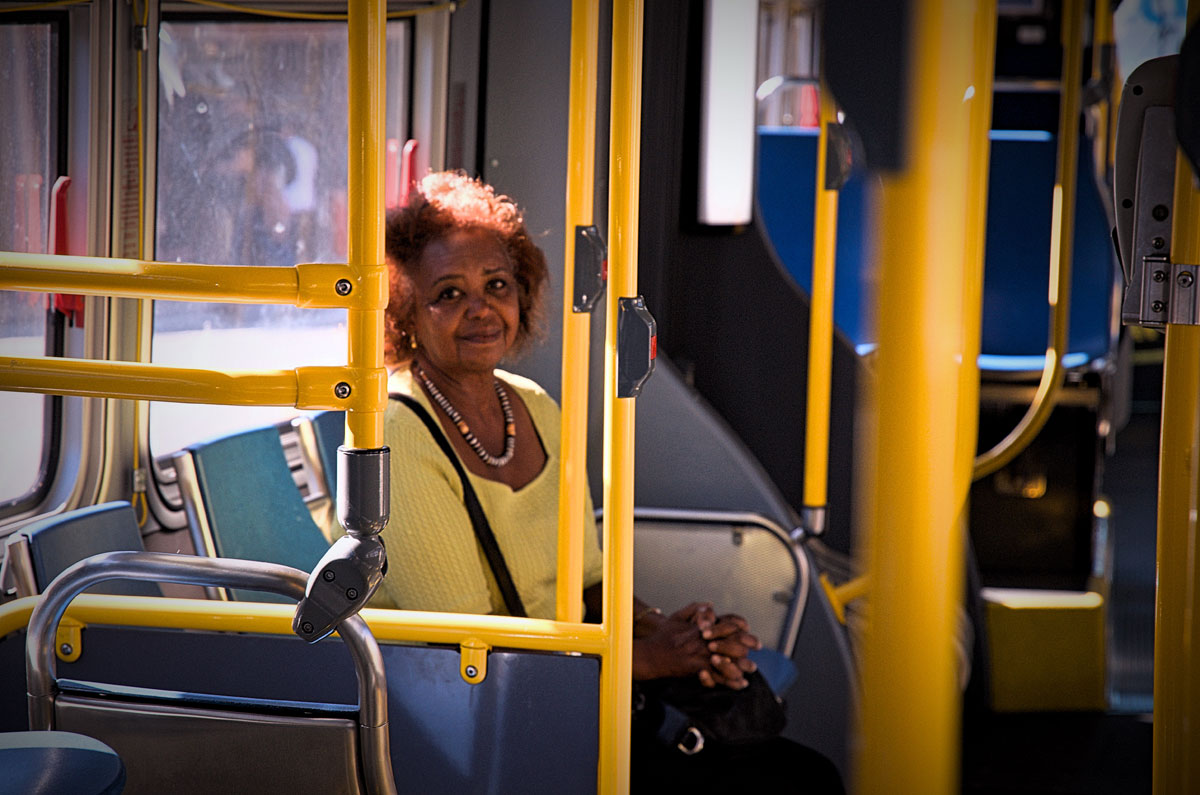 On the way, we saw mostly Asian pedestrians and shop workers, such as this woman in a vegetable market. 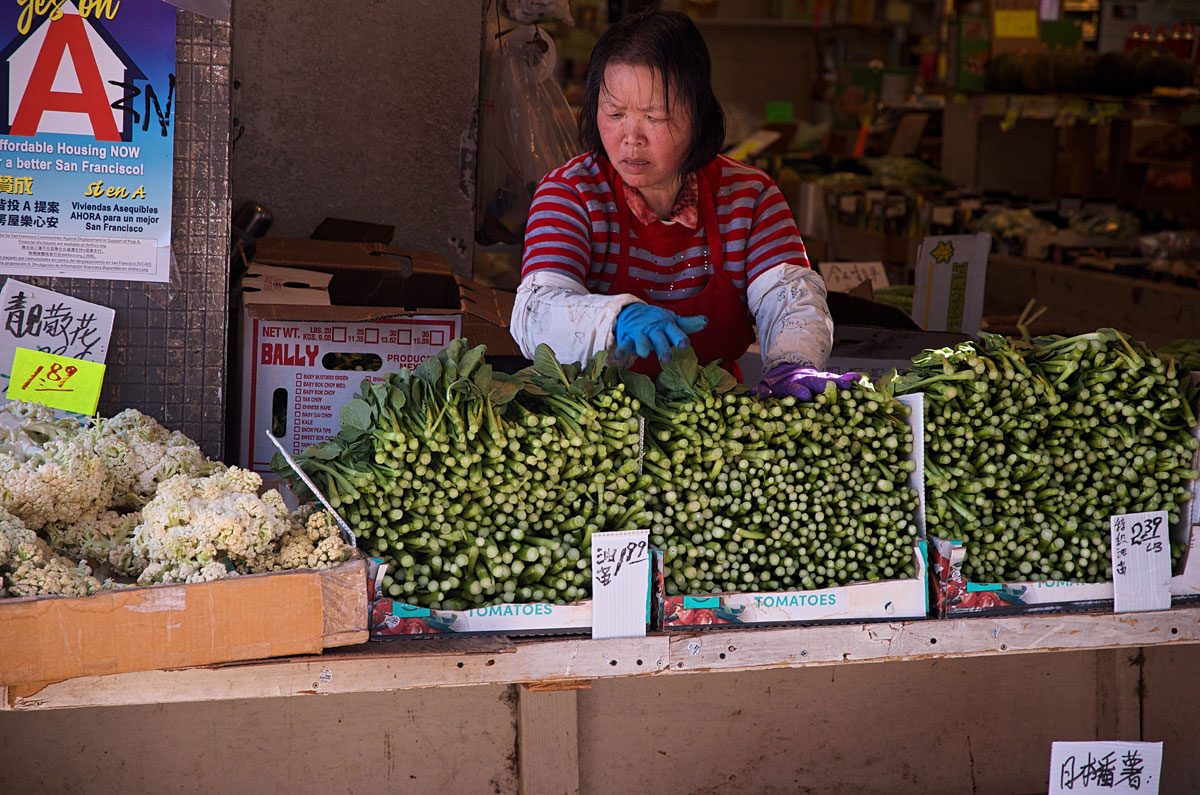 This is the oldest and most established Chinatown in the country and continues to retain its own customs, languages, places of worship, social clubs, and identity. It’s also the name of the iconic neo-noir movie starring Jack Nicholson, where the neighborhood is a metaphor for “nothing is as it appears to be.” Tourist flock here and take pictures under the ceremonial, three portal Dragon Gate and by red lanterns hung between buildings.

As we passed by Washington Square, we saw the beautiful, double-tower Saints Peter and Paul Church, which has been shown in many movies from the Ten Commandments to Dirty Harry. 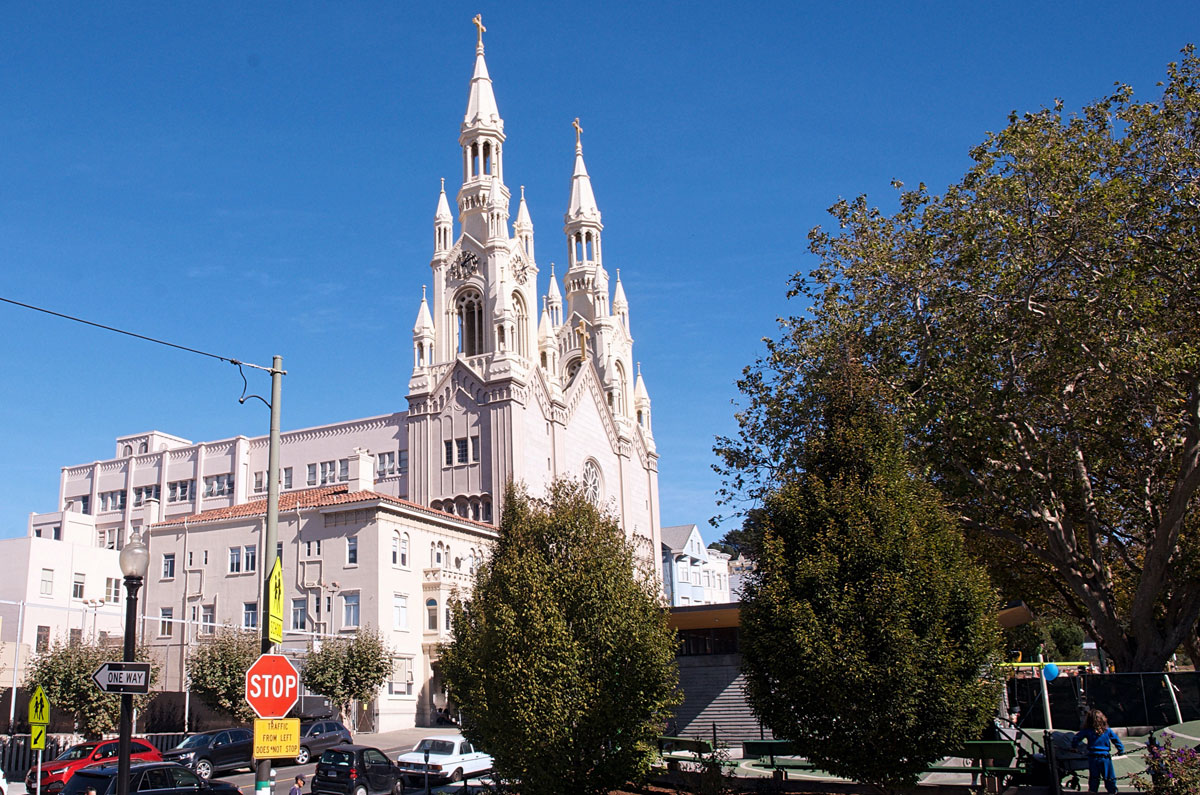 Everyone who comes to San Francisco for the first time goes to Fisherman’s Wharf. I’m not sure it deserves the status of a can’t-miss attraction, but it’s fun, nevertheless. There are many sites such as Madame Tussaud’s Wax Museum, World War II boats, sea lions, and one souvenir shop after another. There is a sweeping view of the bay, including Alcatraz, the now-closed federal prison who incarcerated many infamous prisoners such as Al Capone, “Machine Gun” Kelly and Robert Stroud, the “Birdman of Alcatraz.” 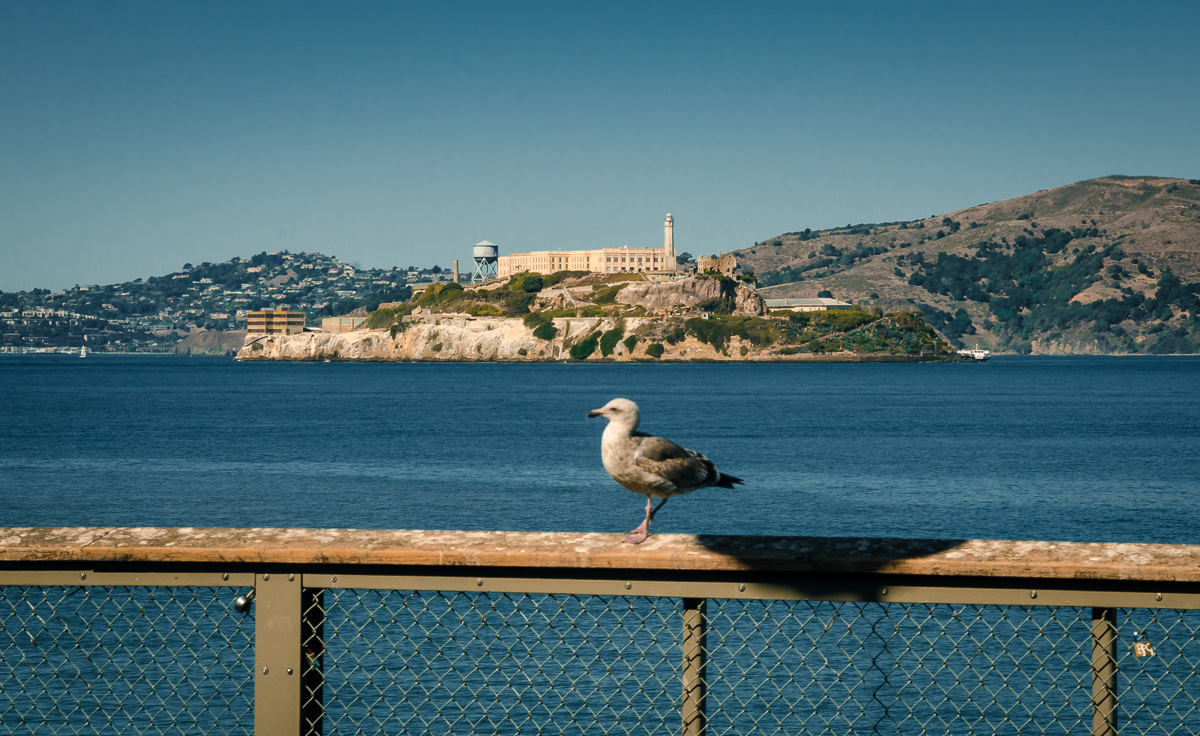 A tour of Alcatraz is fascinating, especially listening to the voices of the prisoners, but we had done it before.

We lunched at the venerable Swiss Louis Italian and Seafood Restaurant on Pier 39, which had delicious shrimp and calamari. Then we moseyed over to the huge sourdough bakeries, which have bread in a variety of animal shapes and holiday designs.

Of course, San Francisco will forever be known for the 1967 “Summer of Love” where young people from around the world flocked to experience the psychedelic music and drugs. There are still remnants of this time.

Alamo Square and the Painted Ladies

We then took a taxi to Alamo Park, where we discovered the famous “Painted Ladies” Victorian Houses in front of the San Francisco skyline. This photo was taken the last time I was there in 2013. I’m using it because it’s better than any picture I was able to take on this trip. 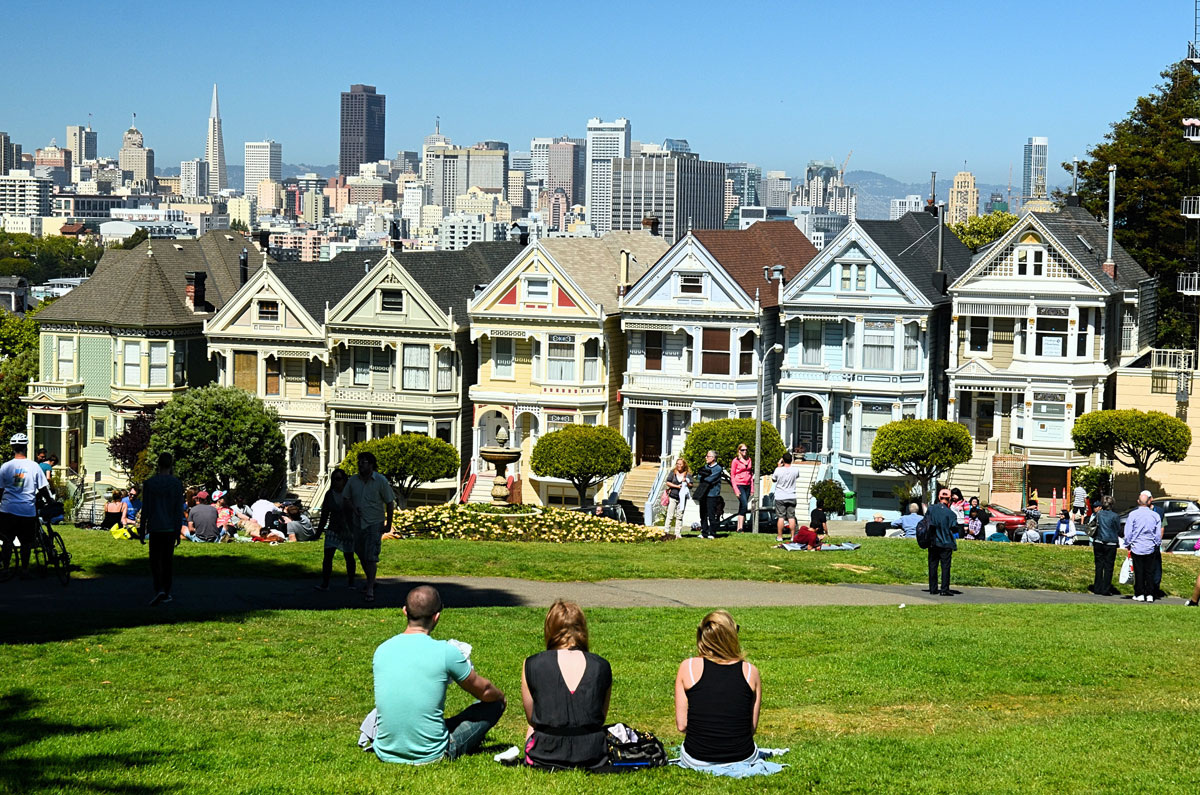 San Francisco is known for its eccentric characters, and one has been dancing in the square for years. 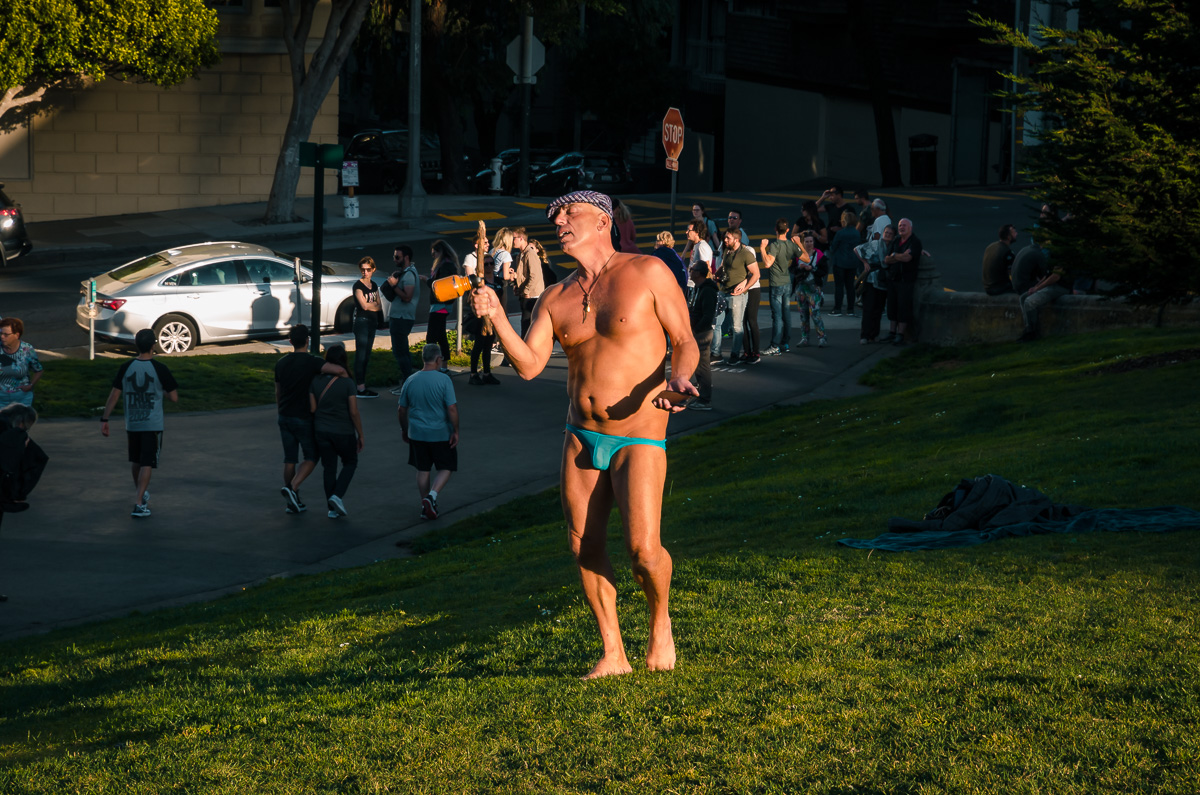 We went a block away to see the house once owned by my friend Phil, whom this website is dedicated to. He bought it in the 1990s when this part of San Francisco wasn’t nearly as expensive and somewhat rundown. Over several years, he renovated this plantation-looking mansion, developed the parking lot into condos, sold everything at a tidy profit, and moved to Colorado. Now the place was empty and shut down by the Department of Buildings for lead paint and other violations. 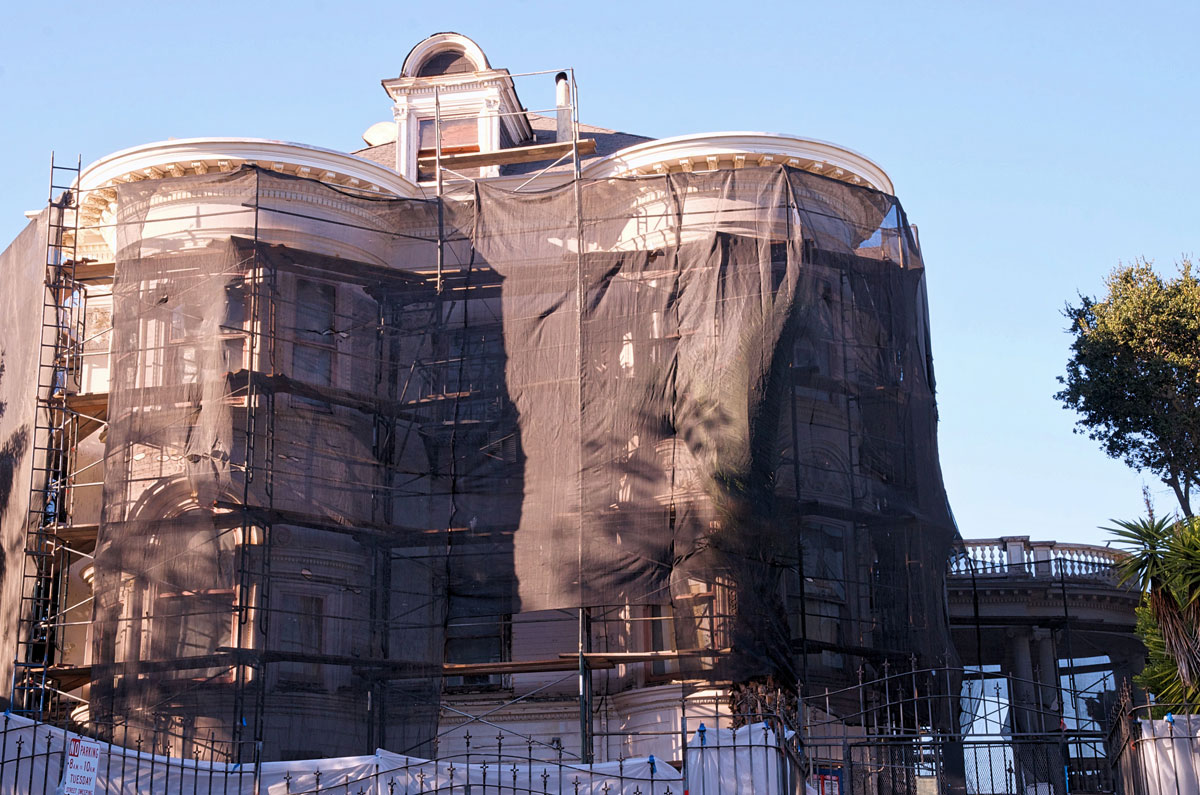 In front of the house, we were asking for directions and met Edward, who was with his grandson.

Edward is originally from Williamsburg, Brooklyn, and a Vietnam War veteran, and he lived in a nearby high-ceiling apartment. Showing how small the world is, he has a son who lived with his mother while growing up one block from us in New York City.

We also encountered this man who recently biked from Florida to San Francisco. 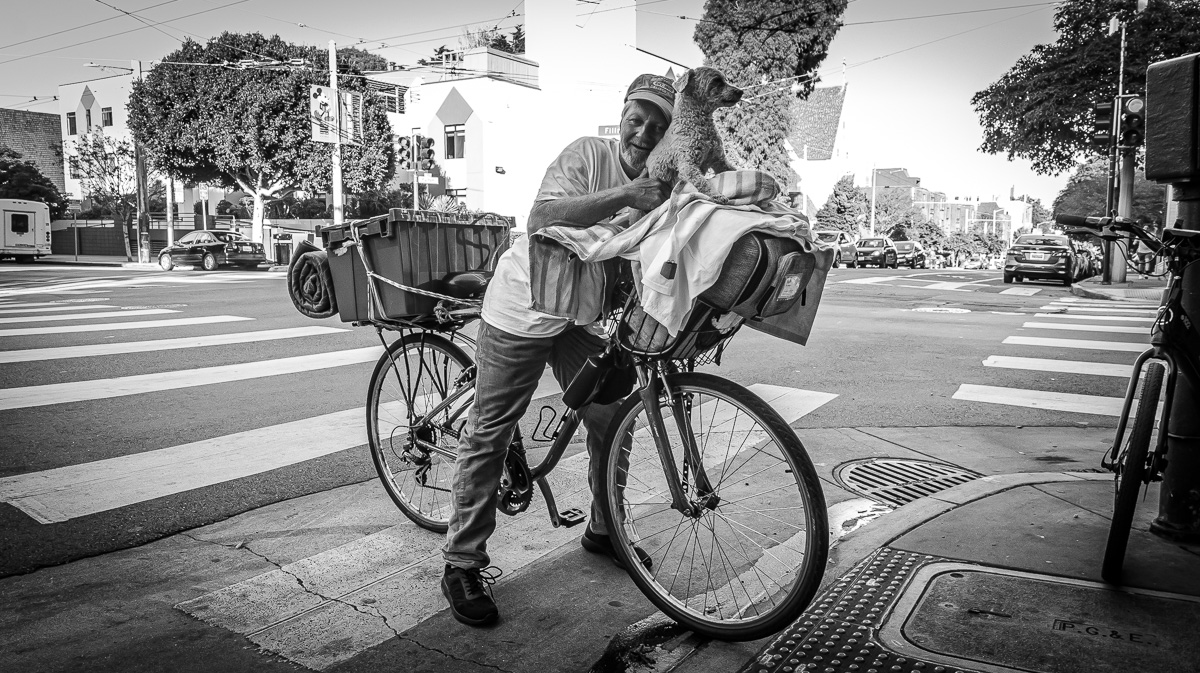 Much of the trip was on railroad tracks cushioned by the bike’s large tires. Unfortunately, someone stole his $4700 Giant bike soon after he arrived. Down but not out, he bought a modest bike to travel the city with his beloved dog.

It took us about a half-hour to walk from Alamo Square to the Mission District, where we had dinner plans. On the way, we crossed a concrete viaduct, which was a pathway for commuting bicyclists.

When we arrived at the Mission District, we had a little time to check out the outdoor murals which are well-known in the neighborhood.

The photo below is a mural by Caratoes, a visual artist born in Belgium to Hong Kong parents and now living in Hong Kong. 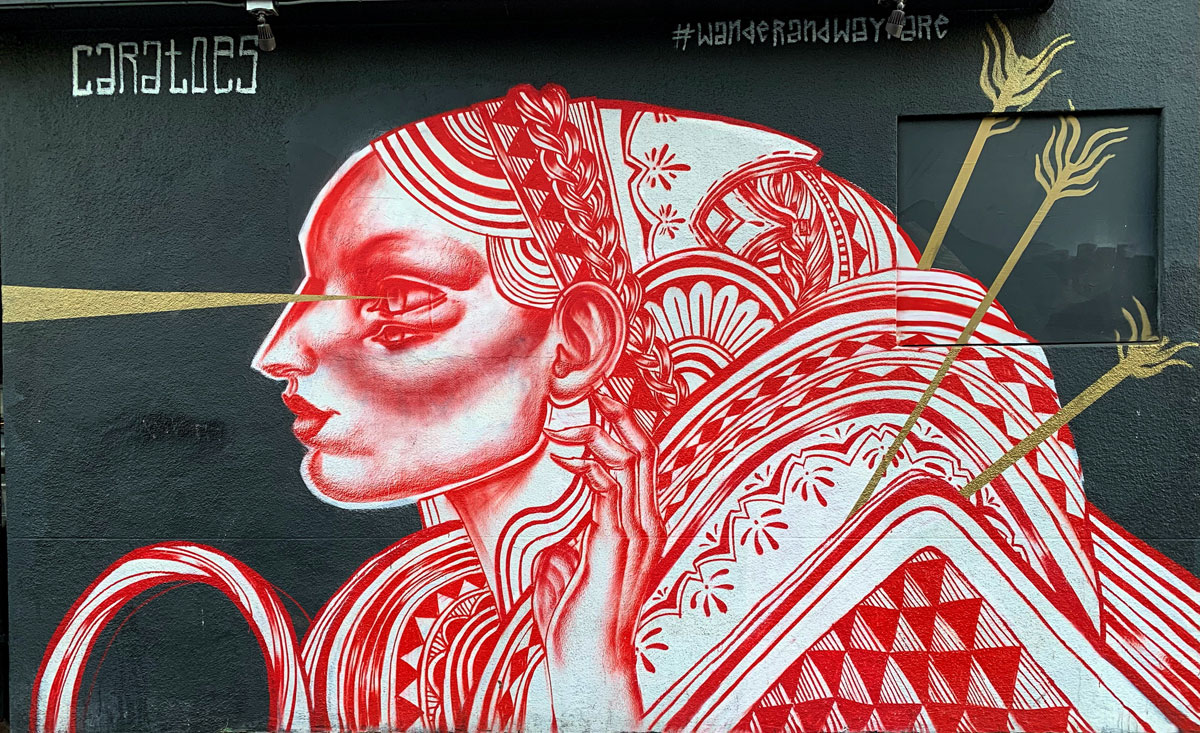 This mural is on the wall of Little Star Pizza. To me, it represents the struggles and wisdom of women and minority ethnic groups.

This one of Jesus going through perhaps a symbolic crown of thorns is on the Episcopal Church of Saint John the Evangelist. 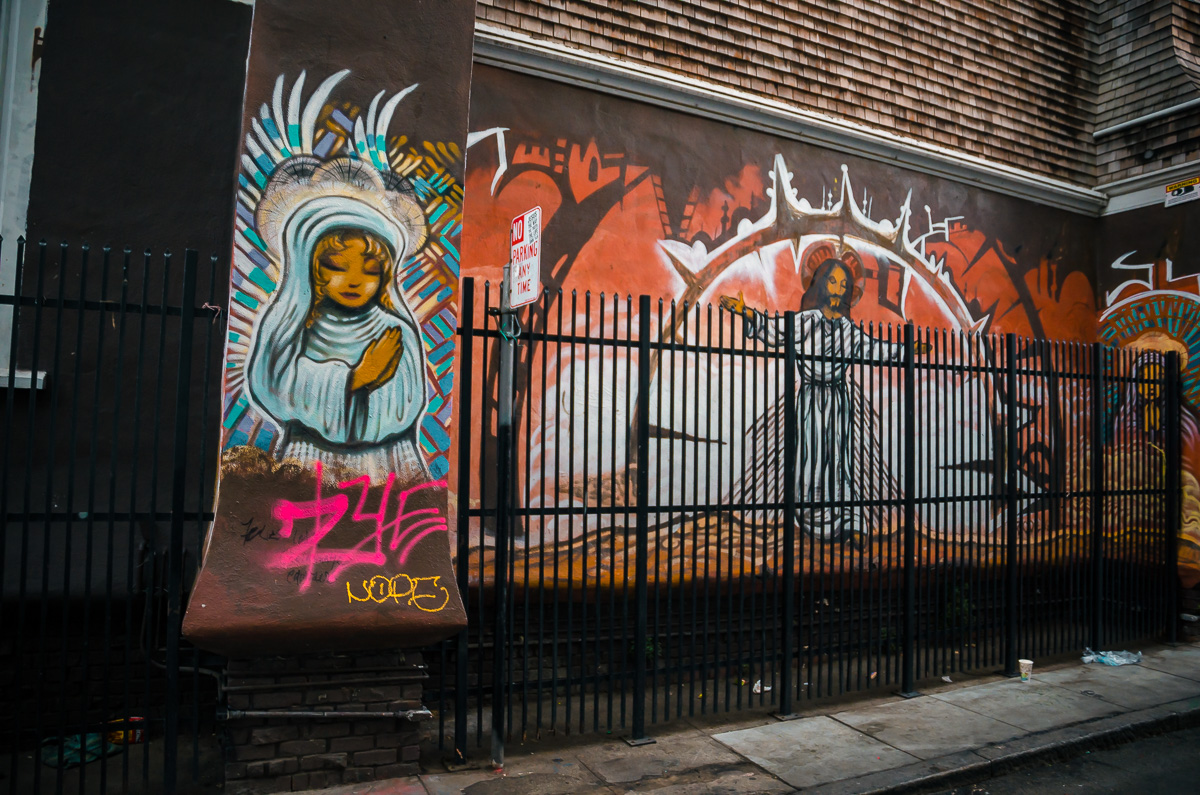 San Francisco has a very high number of homeless people because of sky-high rents. There are quite a few in the Mission District and by the Church which commendably provides food and shelter to the needy.

At 6 pm, we met recently married Evan and Laura (pictured with Khadija and Caitlin, Evan’s mother) at Burma Love.

Burma Love is a wildly popular restaurant featuring farm-to-table Burmese and other Asian dishes. Also dining with us was Marlene and Peter, Evan’s father.

Khadija, Marlene and I then took a taxi to the Rickshaw Stop, a live-music club with 400-person capacity. This night, female lead-singers were playing Americana and country rock, including singer-songwriter Leslie Mendelson, who recently opened for The Who and has recorded with Jackson Brown.

On the side of the stage, we saw a young hipster getting early training in hanging out in a club.

In our cab back to the Mayflower Hotel, after a whirlwind day, I looked outside at the rainy streets and was reminded San Francisco is magical, both day and night.

When I think of San Francisco, I always associate it with the 1968 “San Francisco Girls” song by Fever Tree which is a gem from the psychedelic era with these lyrics.

and stay where you wanna stay

I just gotta go and get back to the Bay”

Whenever I get a chance, I always go back to the Bay.