This site is dedicated to my life-long friend Phil Anselmo. 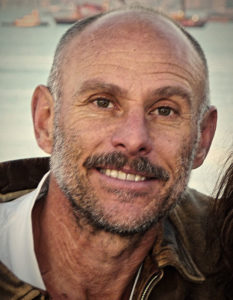 For over three decades we traveled the world, often to locations that most people would not go to because of safety and comfort concerns. In 2011, Phil traveled to Central America. In El Salvador, he went surfing and returned to shore lifeless, tied to the board. My family and I were devastated. He was a unique individual and he will be forever missed.

Phil defined much of his life by his travels, some of which we shared. On his own he traveled for months at a time in the six inhabited continents. He could do this as he always worked on his own as a real estate developer and a lawyer, a useful combination in a contentious field. Also, he had no family responsibilities. He was never married, no one met his standards according to him, and had a son living with his mother, whom he frequently visited and helped support. But more to the point, his life was one incredible journey.

I first met Phil in Skinner Junior High School in North Denver. We were in many of the same classes, but my earliest memory was of Phil winning ribbons on field day for high jumping and sprinting.  While skinny, he always possessed awesome physical strength and great agility. Throughout his life, he enjoyed “playing” in a variety of sports and recreational activities. According to him, he never exercised. Besides athletic talent, he was an avid self-learner and had enviable mechanical aptitude which came in handy in camping expeditions and remote road trips.

Phil was never at a loss for something to say and was usually funny. I remember a number of us in high school went to a Senior Citizens home to entertain the residents. Most of the performances were lame, such as playing an out-of-tune guitar. However, Phil had a bag full of ordinary items. He pulled them out one at a time and wove together a tangled, improvised story that had the audience belly-laughing.

Phil always owned a variety of cars. His first one was an old Volvo he painted bright orange. During a summer in high school we drove the Volvo to the Cripple Creek Donkey Days Festival. While there, we hiked around and it snowed and we couldn’t find our way to the car. We found an unoccupied home and went through the basement window to sleep there for the night. There I realized that Phil was not overly concerned about the rules of society, but he followed his own moral compass.

During  the trip, I first began to notice that Phil was “cost-conscious” (i.e. cheap), He was always aware of value, and reluctant to pay for anything he deemed over-priced. In his Volvo, I had left the glove compartment door open and Phil admonished me to close it, as it was using up the life of the little light bulb inside. Over the years, he would spend hours looking for the cheapest lodging or for the least expensive, but healthy food. It drove me nuts, but at times we stayed in good places and ate tasty food for a song.

Phil and I attended the University of Colorado in Boulder as undergraduates. One afternoon, I kept hearing pings on the window of my third-floor dorm room. I looked out and it was Phil throwing rocks at the window as it was easier to contact me that way than to walk up the stairs. He was like a cat, preserving his energy but using it explosively when desired.

When we were freshmen, I threw out a wild idea of hitchhiking to San Francisco for a weekend and he immediately agreed. (What normal person would do this?)  In Oakland, two drunk young ladies picked us up and were soon stopped by the cops, who turned the car over to us. We had to arrange to get them out of jail even though we had been in the city for only a few hours. For lunch, we went to a Hare Krishna center that offered free vegetarian food and their mystic philosophy.  On the way back, after losing our meager stash of cash playing blackjack in Carson City, we were freezing late at night on a desolate stretch of I80 in Utah. A pick-up truck stopped to give us a ride, but only had room in the open bed. We were so cold that we  told stories about being submerged in icy water to distract ourselves. In five days we went there and back, but I didn’t know this was just the start of many adventures.

After graduating, we worked for the summer in the Wyoming oil fields and celebrated Independence Day at Devil’s Tower by watching nearby fireworks. In September, Phil went to law school in Washington state and I went to business school in New York City. But we kept in touch and he would frequently visit me, as I did when he later lived in San Francisco.

A cat may have nine lives, but Phil had nine-squared. He survived flying his plane in lightning storms and deep scuba diving with malfunctioning equipment. As he had a heightened sense of self preservation, he usually won his bets, but not always. On one trip my wife, two daughters and I flew in Phil’s plane to the Snake River on the border of Idaho and Oregon to go rafting. On our way back, Phil was unable to lift the plane off the dirt landing strip more than fifty feet and we crashed into the side of the road.  Luckily, we all lived. However, we were the talk of Half Way, Oregon for the next few weeks.

Over the years, we traveled to almost every US state. However, it was on our overseas trips that we experienced the most excitement and certainly the most risk. In Ethiopia, we went without water for four days while avoiding angry, spear-toting locals in the Omo Valley. In Iran we spent forty-eight hours (the length of our transit visa) buying rugs in Isfahan after three weeks on the Silk Road. In India, Phil thinking his normal unconventional way, insisted on eating from street vendors where we could see how they cooked the food. As a result of this approach which is not recommended in any travel guide, we never experienced any stomach problems. 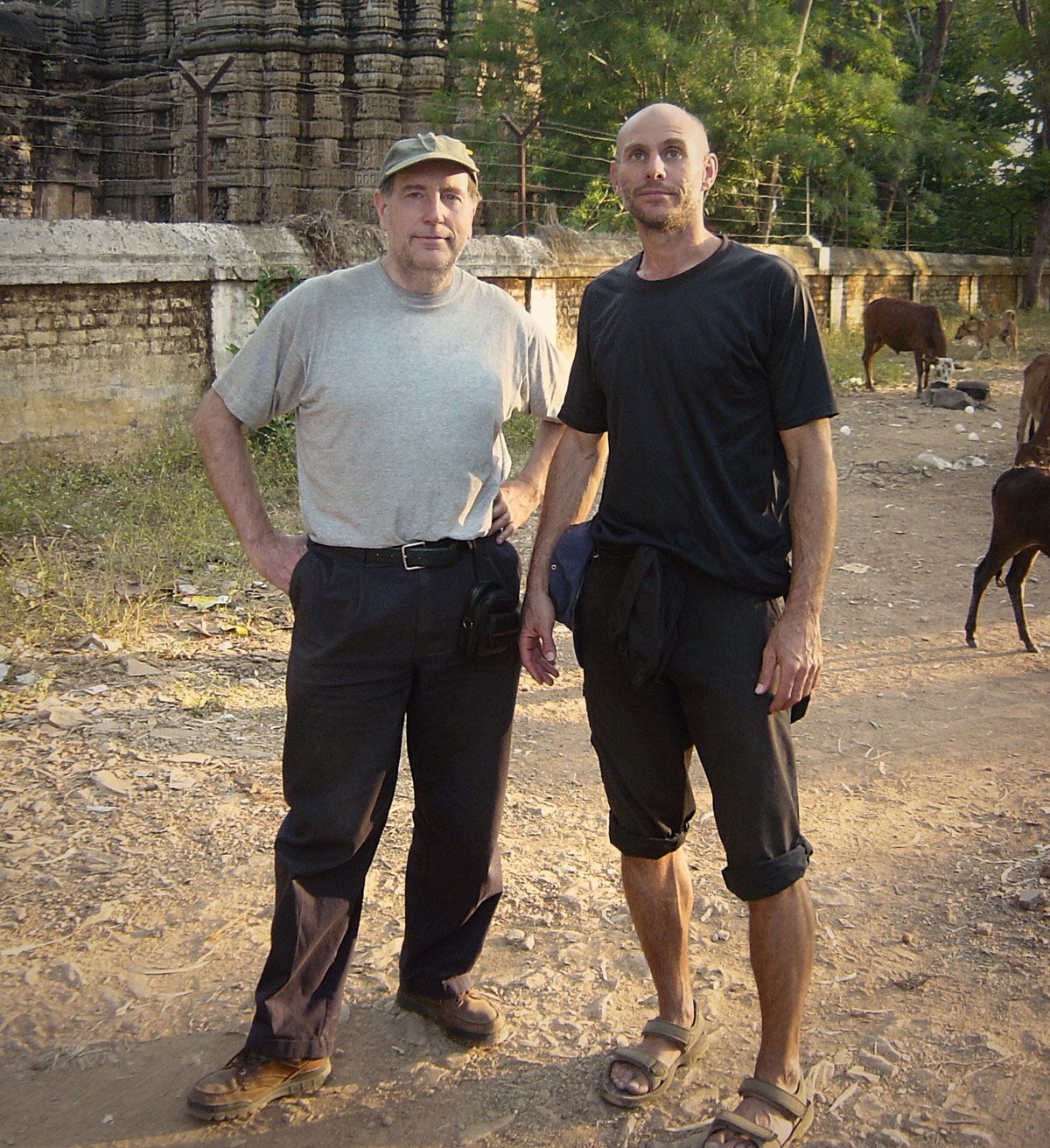 Phil was obviously tough and street smart. In Northern Pakistan, a bus driver thought he was a soldier. These traits were valuable when we were confronted with four men who had driven us around the Hunza area and demanded more money. We thought we would be physically attacked, but they must have thought twice. While Phil was thin and muscular, he also liked to show off and not wear his shirt, often regardless of local customs or the sensibilities of others.

In a trip just a year before his accident, we discussed going to a country with few foreign tourists but not in civil war. We ended up in Nigeria, driving days in vans and cars. We encountered endless army and police road blocks and traveled in Boko Haram territory. 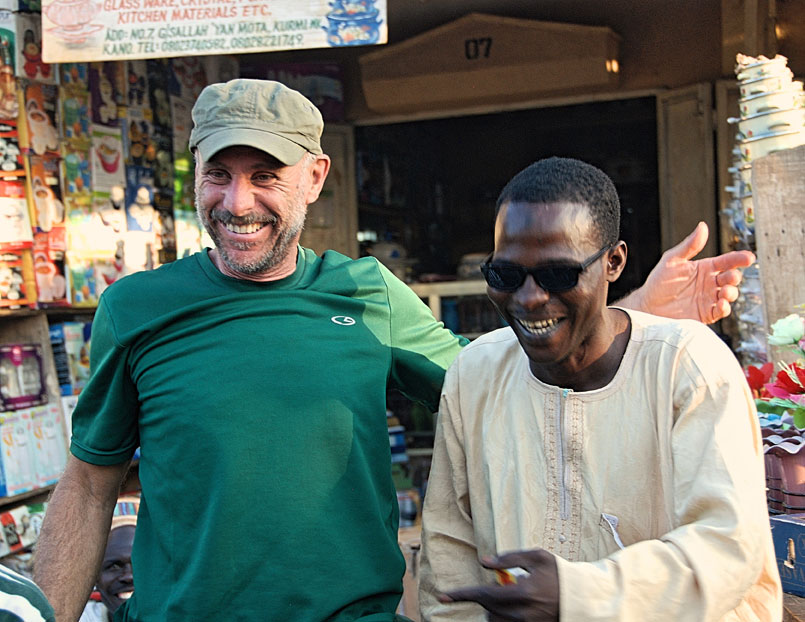 When a uniformed man at one of these roadblocks tried to shake down Phil for money, he responded with funny retorts but in a crazy voice. The passengers laughed, and the puzzled extorter relented. On our last night in the country, we joined a convoy of taxis, cars and trucks from Lake Chad, as the travelers were afraid of robbers or worst. When we arrived in Maiduguri, the streets were eerily empty because of a curfew. Our taxi dropped us off at what was reputedly the best hotel in town. It was pitch dark on the grounds and in the buildings. We walked up the driveway and discovered the eight-foot metal gate was locked. We climbed over it and walked into the hotel hallways, by the empty reception desk and rooms which looked like they had been unoccupied for a number of days. One room we went into, we startled by a man sleeping under a mosquito net. However, these types of incidents were par for the course for us.

They say a tiger never changes his stripes, but this was not true with Phil.  Phil became more generous over time. I saw him pay someone more than they requested if he thought they deserved it. In Cameroon, the last country we traveled to together, he spent several hundred dollars flying out of his way with me to Douala to help me catch my flight in this French-speaking city, as he was travel-fluent in the language.  By the way, he also communicated in Italian and Spanish – just another of his many talents.

Where ever Phil went, he would cause a stir. He once stayed with me in New York and was watching our pit bull, Georgia, who often wandered away. With his supreme confidence, he assured me that he had trained our old dog and she would obey him. One night I came home and found our dog gone and Phil riding my bicycle trying to find her, as she left when he wasn’t keeping an eye on her.  Eventually we found the old girl that night, but only after employing many neighbors and the police in a neighborhood search.

In the last few years of his life, he took his considerable, self-made savings (mostly earned by converting and constructing buildings in San Francisco) and invested in land around Montrose, Colorado. This was an area he deeply loved. The air was pure, and he could hike or ride horses in the mountains. He was building a large, eco-friendly lodge in Crawford, when the 2008 financial crisis hit. His liquidity evaporated, and the banks called on guarantees by some family members. Instead of negotiating together with the banks and waiting out the depressed real estate market, a family feud of Shakespearean dimensions ensued. It was still going on when his accident occurred, but already he had very valuable property sold at bargain basement prices and some of his family members were trying to disbar him and throw him into jail. He was a difficult person to do business with, but I cannot understand what why his family did this. But what does it matter now?

After all these years, I still can’t believe Phil isn’t with us. As he was the eternal joker, I expect him to show up one day at my door and proved he beat the odds one more time. As I said before, Phil was indeed like a cat, but not just any cat, but a lion. He made his own rules and decisions and lived in fear of no one and nothing. He was incapable of living a sheepish, conventional existence. He was compelled to test the limits in travel, personal relations and business. Like a lion in the wild, he lived large and was not shy to hunt and fight. He was never destined to die infirm as an old creature. I wish I could live more of my life like Phil. He will no longer travel physically with me, but he will always be a partner on my trips, as I will envision how he would chat with the locals, look for a good deal, and find yet another adventure.