Brazil, officially the Federative Republic of Brazil, is the largest country in both South America and Latin America. Brazil is a regional and middle power, and is also classified as an emerging power. It is considered an advanced emerging economy, having the twelfth largest GDP in the world by nominal, and eighth by PPP measures, the largest in Latin America. Brazil is the fifth most-populous country on Earth and accounts for one-third of Latin America’s population. Most of the inhabitants of Brazil are concentrated along the eastern seaboard, although its capital, Brasília, is located far inland and increasing numbers of migrants are moving to the interior. Rio de Janeiro, in the eyes of many of the world, continues to be the preeminent icon of Brazil.

Brazil is unique in the Americas because, following independence from Portugal, it did not fragment into separate countries as did British and Spanish possessions in the region; rather, it retained its identity through the intervening centuries and a variety of forms of government. It has a humid tropical and subtropical climate except for a drier area in the Northeast, sometimes called the drought quadrilateral or drought polygon, that extends from northern Bahia to the coast between Natal and São Luís; that zone receives about 15-30 inches of precipitation a year. 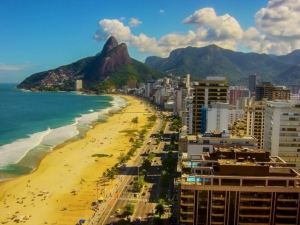