Chile is a long, narrow country stretching along South America’s western edge, with more than 6,000km of Pacific Ocean coastline. Santiago, its capital, sits in a valley surrounded by the Andes and Chilean Coast Range mountains. The city’s palm-lined Plaza de Armas contains the neoclassical cathedral and the National History Museum. Chile is a developing country with a high-income economy and ranks 43rd in the Human Development Index. It is among the most economically and socially stable nations in South America, leading Latin America in rankings of competitiveness, per capita income, globalization, state of peace, and economic freedom.

Chile’s relief is for the most part mountainous, with the Andes range dominating the landscape. Because of the country’s extreme length it has a wide variety of climates, from the coastal desert beginning in the tropical north to the cold subantarctic southern tip. Chile exhibits many of the traits that typically characterize Latin American countries. It was colonized by Spain, and the culture that evolved was largely Spanish. However, appreciation for the influence of indigenous culture has been growing. 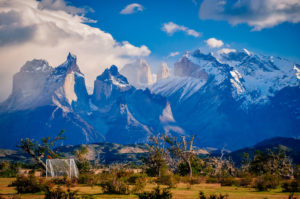