Croatia officially the Republic of Croatia is a country at the crossroads of Central and Southeast Europe. It shares a coastline along the Adriatic Sea. It borders Slovenia to the northwest, Hungary to the northeast, Serbia to the east, Bosnia and Herzegovina and Montenegro to the southeast, and shares a maritime border with Italy to the west and southwest. Croatia, country located in the northwestern part of the Balkan Peninsula.
It is a small yet highly geographically diverse crescent-shaped country and Its capital is Zagreb. The upper arm of the Croatian crescent is bordered on the east by the Vojvodina region of Serbia and on the north by Hungary and Slovenia. The body of the crescent forms a long coastal strip along the Adriatic Sea, and the southern tip touches on Montenegro. Croatia is composed of three major geographic regions. In the north and northeast, running the full length of the upper arm of the Croatian crescent, are the Pannonian and para-Pannonian plains 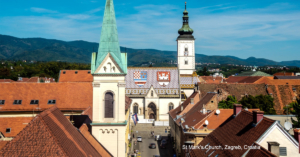 Zagreb – The Capital City That Shouldn’t Be Missed

Most tourists go to Croatia for the Dalmatian coast and the walled city of Dubrovnik. They may go through Zagreb as a transit stop and