It shares the continental landmass of Afro-Eurasia with both Asia and Africa. It is bordered by the Arctic Ocean to the north, the Atlantic Ocean to the west, the Mediterranean Sea to the south and Asia to the east. Europe’s eastern boundary, however, is not a cultural, political, or economic discontinuity on the land comparable, for example, to the insulating significance of the Himalayas, which clearly mark a northern limit to South Asian civilization. Europe’s boundaries have been especially uncertain, and hence much debated, on the east, where the continent merges, without sundering physical boundaries, with parts of western Asia.

Europe occupies some 4 million square miles within the conventional borders assigned to it. That broad territory reveals no simple unity of geologic structure, landform, relief, or climate. Rocks of all geologic periods are exposed, and the operation of geologic forces during an immense succession of eras has contributed to the molding of the landscapes of mountain, plateau, and lowland and has bequeathed a variety of mineral reserves. 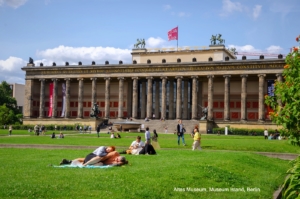 I finally made it to Berlin, the capital of Germany and a cultural, political and commercial powerhouse for centuries. I was eager to see if