Jordan, an Arab nation on the east bank of the Jordan River, is defined by ancient monuments, nature reserves and seaside resorts. It’s home to the famed archaeological site of Petra, the Nabatean capital dating to around 300 B.C. Jordan has a high Human Development Index, ranking 102nd, and is considered an upper middle income economy. The Jordanian economy, one of the smallest economies in the region, is attractive to foreign investors based upon a skilled workforce.

The capital and largest city in the country is Amman named for the Ammonites, who made the city their capital in the 13th century BCE. Amman was later a great city of Middle Eastern antiquity, Philadelphia, of the Roman Decapolis, and now serves as one of the region’s principal commercial and transportation centers as well as one of the Arab world’s major cultural capitals. Slightly smaller in area than the country of Portugal, Jordan is bounded to the north by Syria, to the east by Iraq, to the southeast and south by Saudi Arabia, and to the west by Israel and the West Bank. 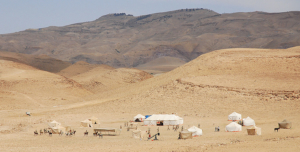