One of my greatest joys in life is finding a hole-in-the-wall café or restaurant off the main avenue. It did not take me long to realize that Melbourne is a city filled with pedestrian lanes with my kind of joints. 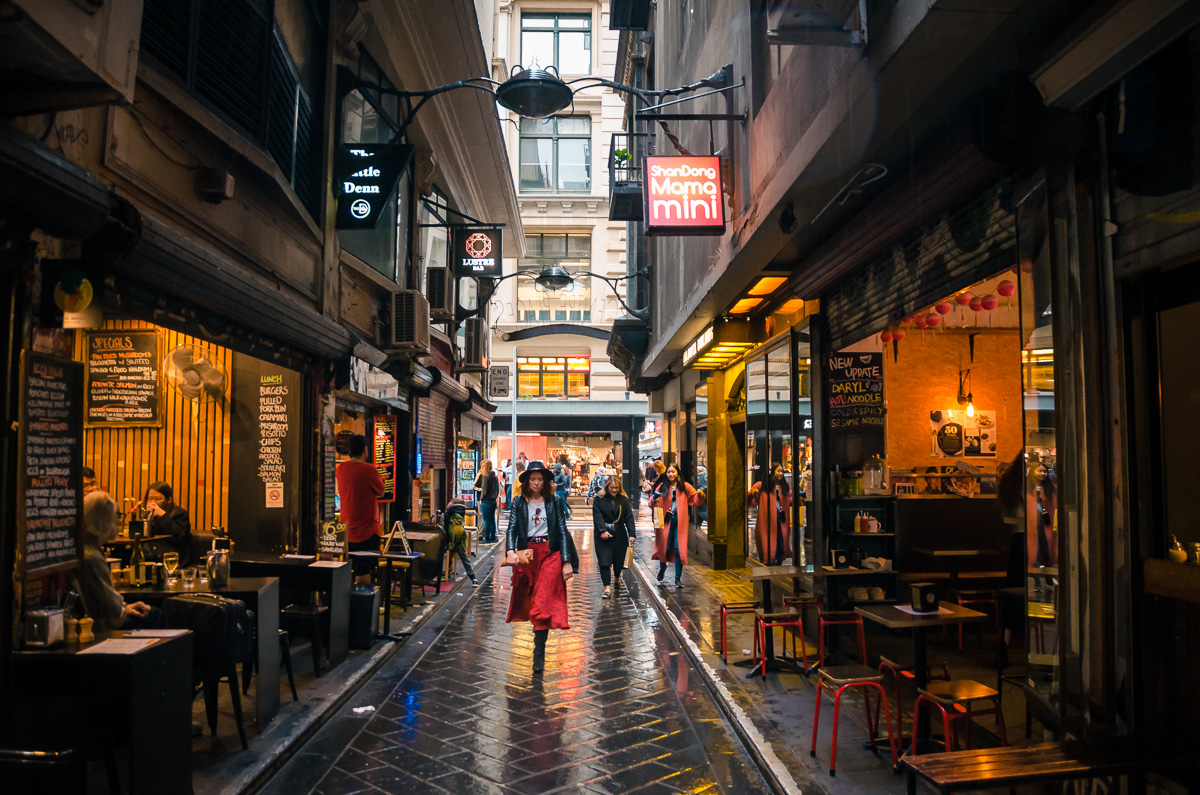 In these narrow walkways, I started each day with a cappuccino made by a skilled barista… 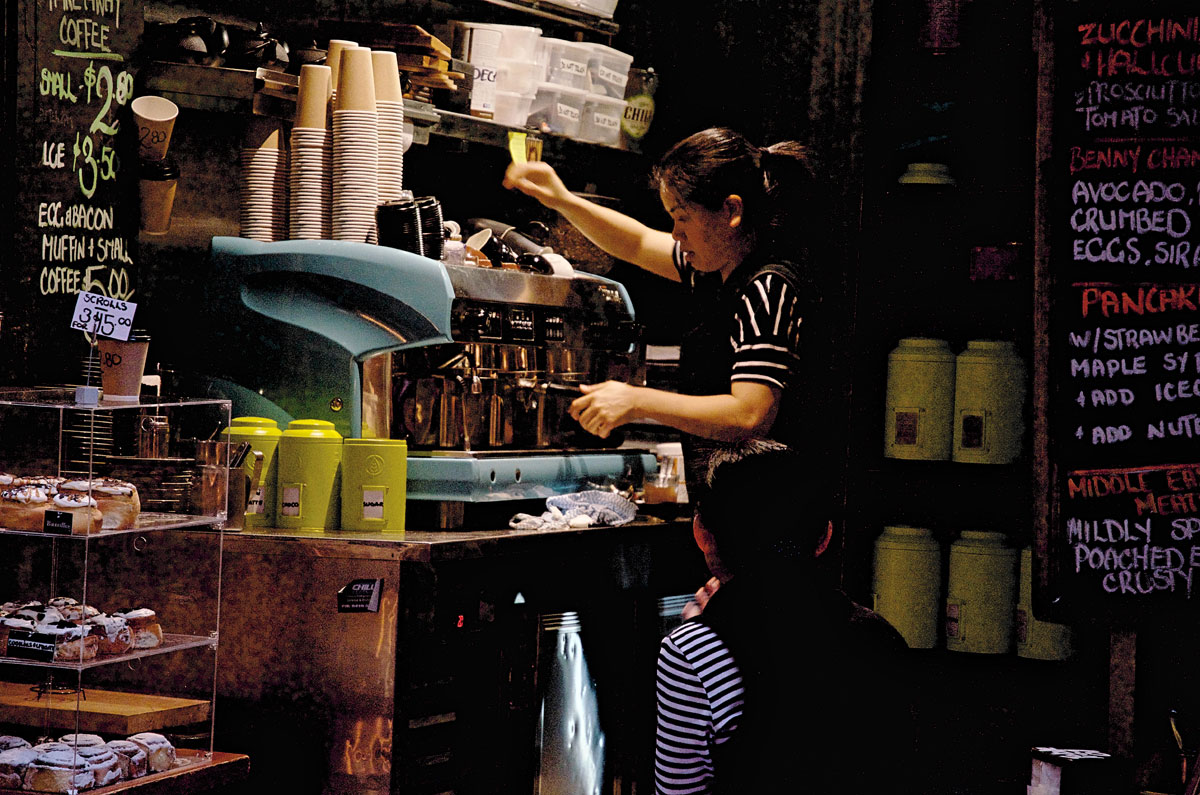 …and later ate lunch at a superb ethnic restaurant, like the tapa bar MoVida. 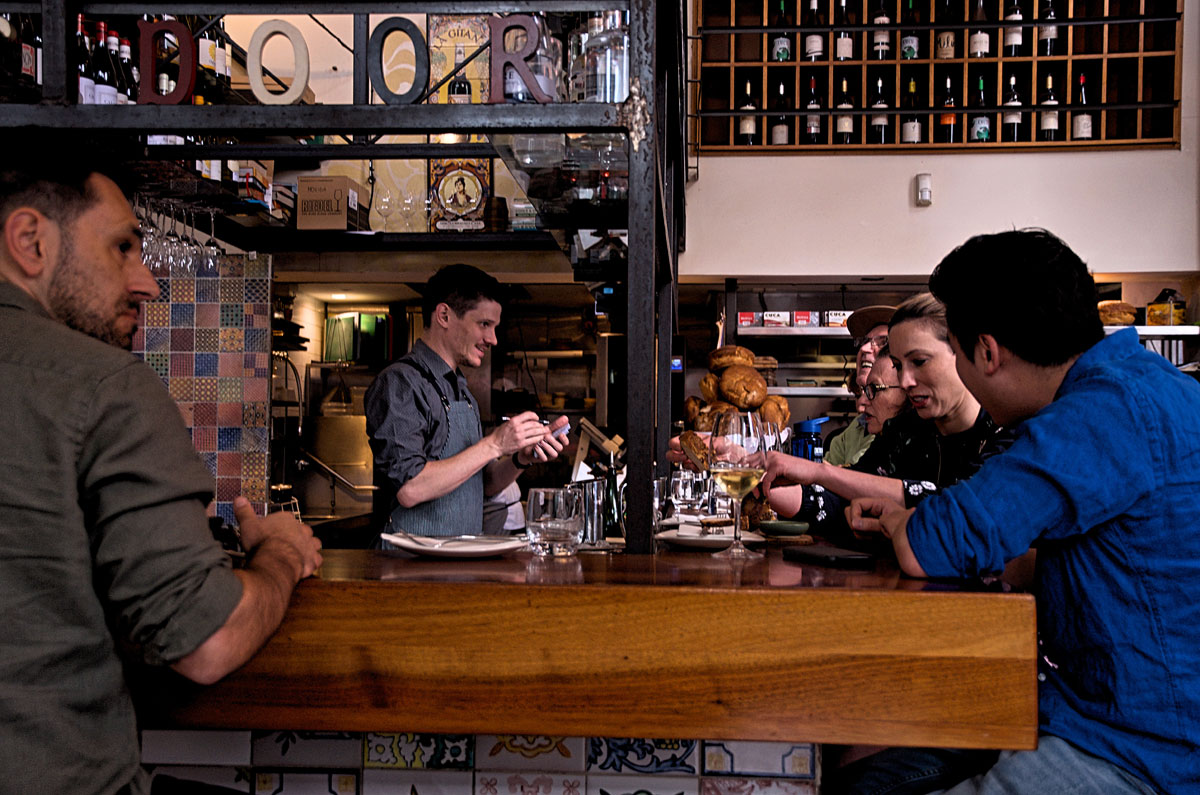 When not indulging in culinary delights, I walked the alleys and admired the outdoor murals… 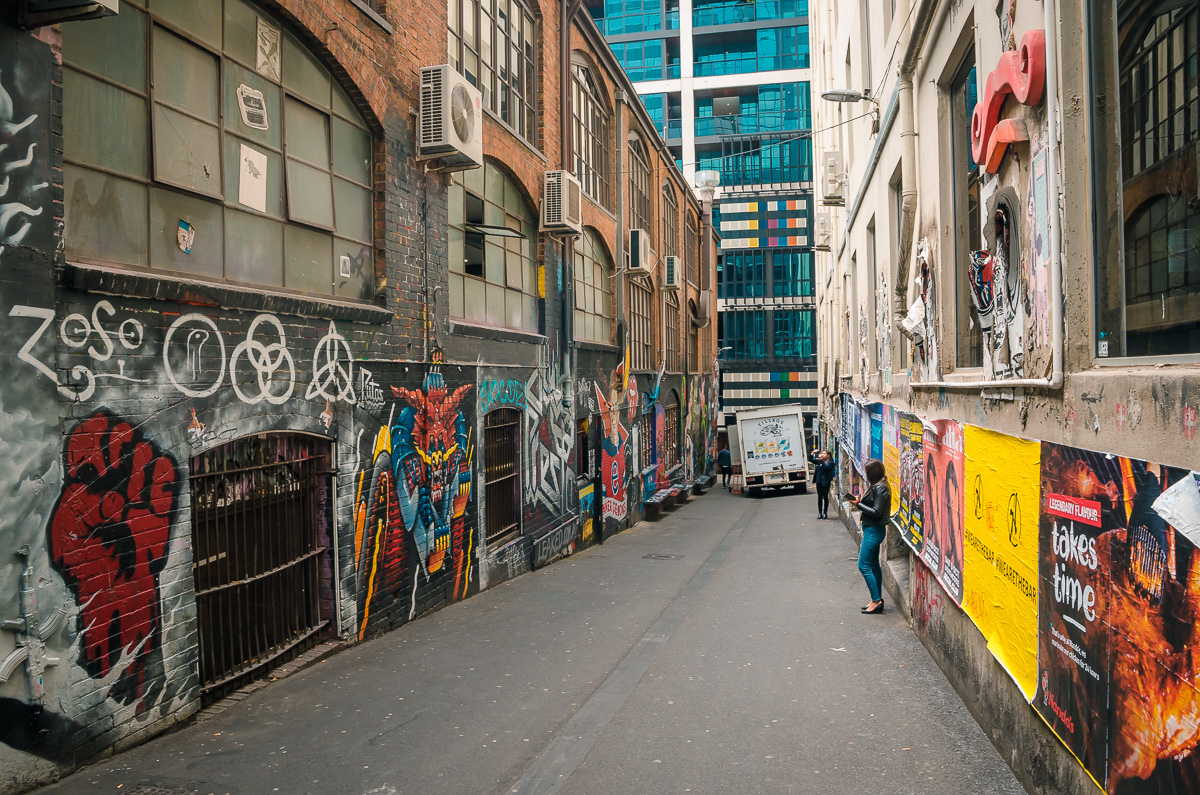 …and reveled in the graffiti. 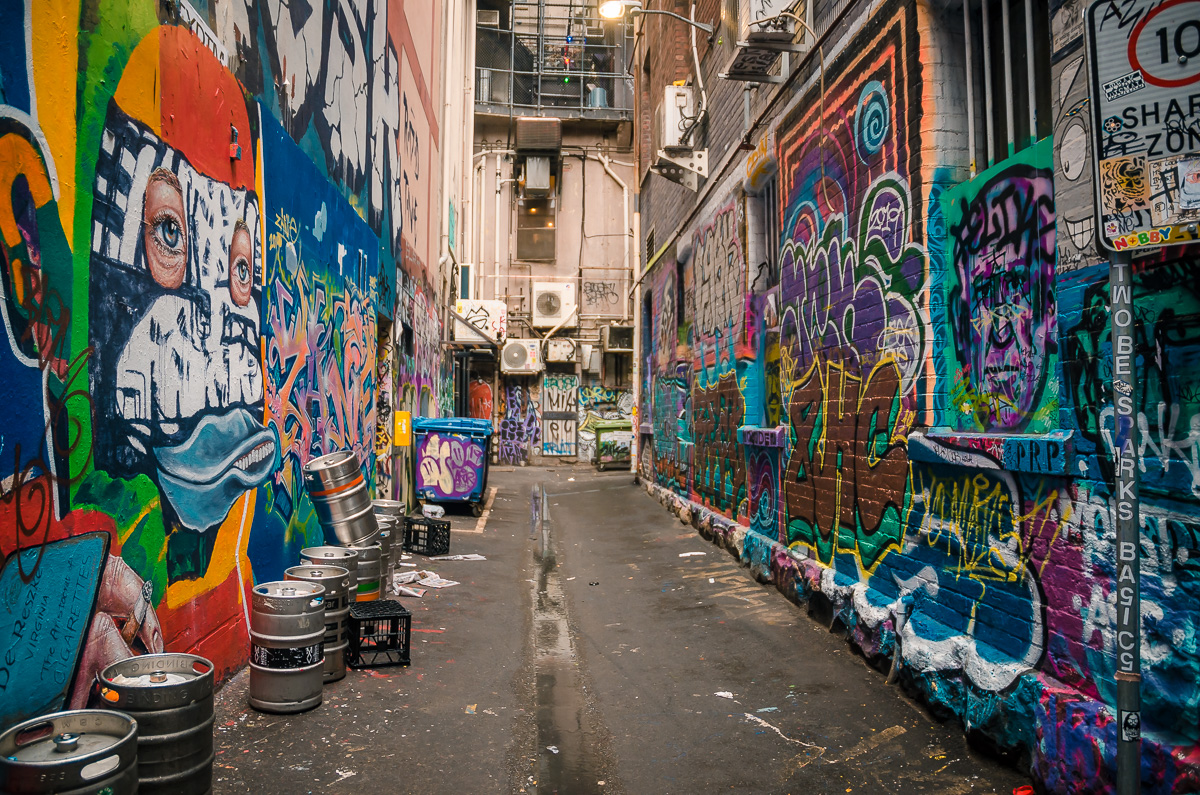 When I was tired of walking, I started the routine over with a cappuccino (once in a café which referenced my NYC-hometown, Bowery to Williamsburg). 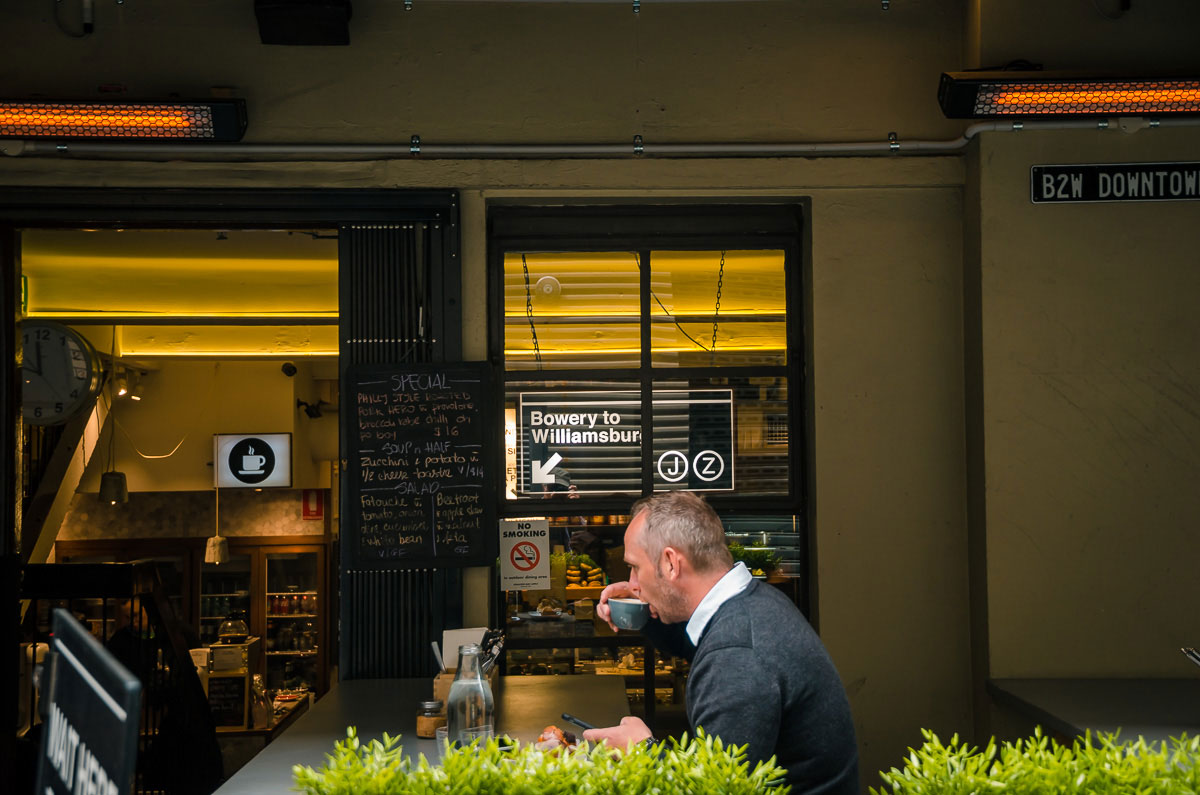 The whole time in Melbourne, I was in an urban paradise.

Why We Travelled to Melbourne

In September and October 2019, my wife Khadija and I, along with our friends Peter and Caitlin, spent 18 days in Australia. When researching online what to see in Australia, Melbourne kept popping up as a can’t-miss. Of particular interest to me was its street art, which we found everywhere, even on public buildings such as the State Library Victoria. 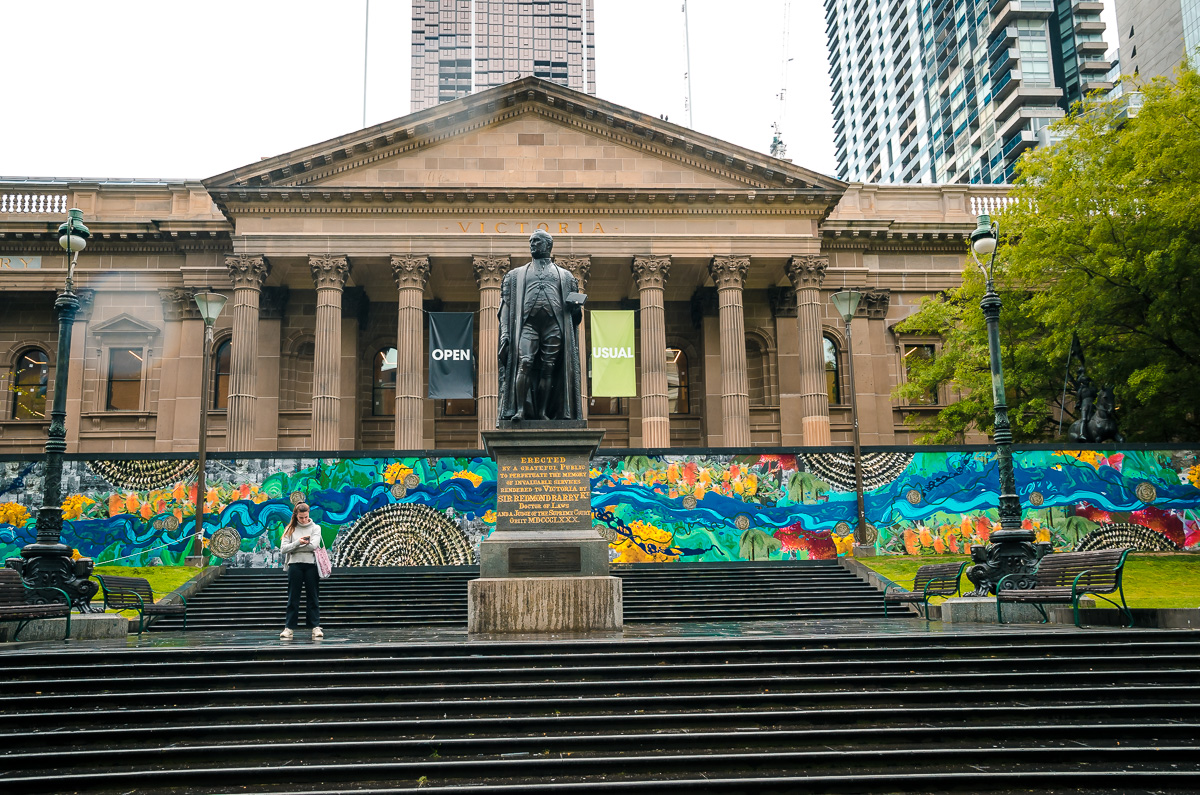 All of us believed cultural and ethnic diversity makes an exciting place, and Melbourne is the most diverse of Australia’s large cities. About one-third were born outside of Australia. About 20% have Asian origins, and there are many places of worship for Buddhists, Muslims, Hindus, and Jews. This diversity is evident everywhere. 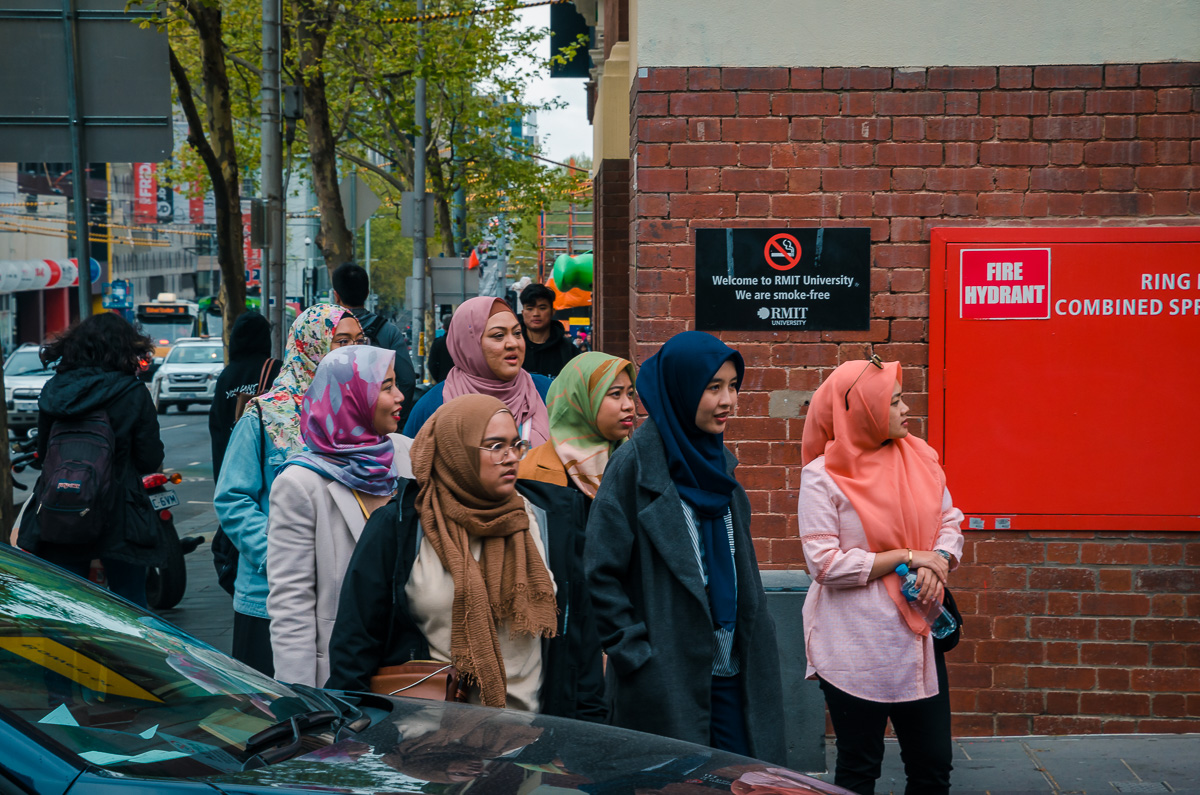 It’s the capital of the State of Victoria and the second-most populous city in the country with almost four million people.

One thing to keep in mind, the city’s name is pronounced “Mel – burn.” The second syllable is like the burn from a fire

Melbourne is very safe. We walked everywhere and never saw a reason to be concerned about our safety. Of course, we used standard caution, which is especially necessary for unfamiliar places.

How to Get Around Melbourne

Getting around Melbourne is very easy by foot, metro (subway), bus, or tram. The tram is the only type of public transportation we used and is free within the city center. 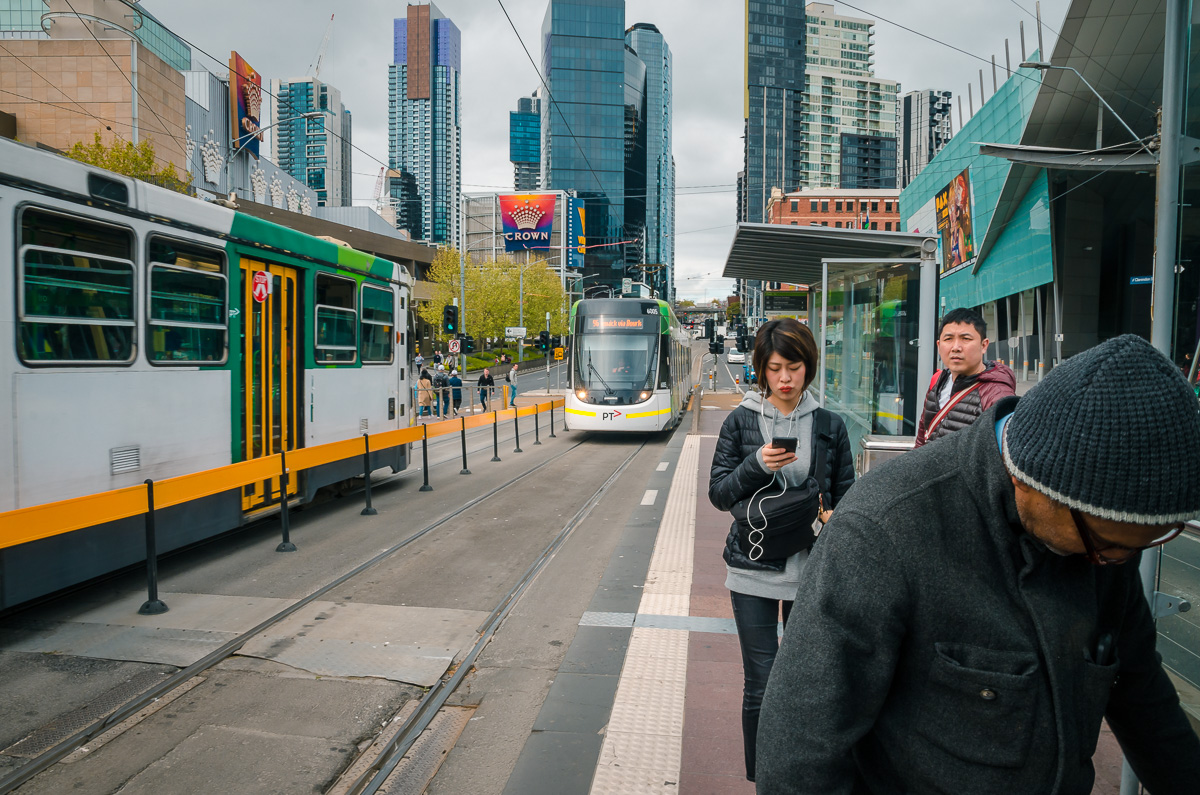 We spent two full days and three nights in Melbourne. This is the bare minimum; we would have doubled it if we could have. To get an efficient overview of the city center, Khadija and I went on a three-hour free (but absolutely must tip the guide) walking tour with Walks 101. Our guide was Marc, who was informative, personable, and funny.

It was worth going on the tour just to hear his animated story of the life of Australia’s most famous criminal and rebel, Ned Kelly.

The following map has places we visited. The tram was free everywhere except for a small charge for Fitzroy and Southbank. 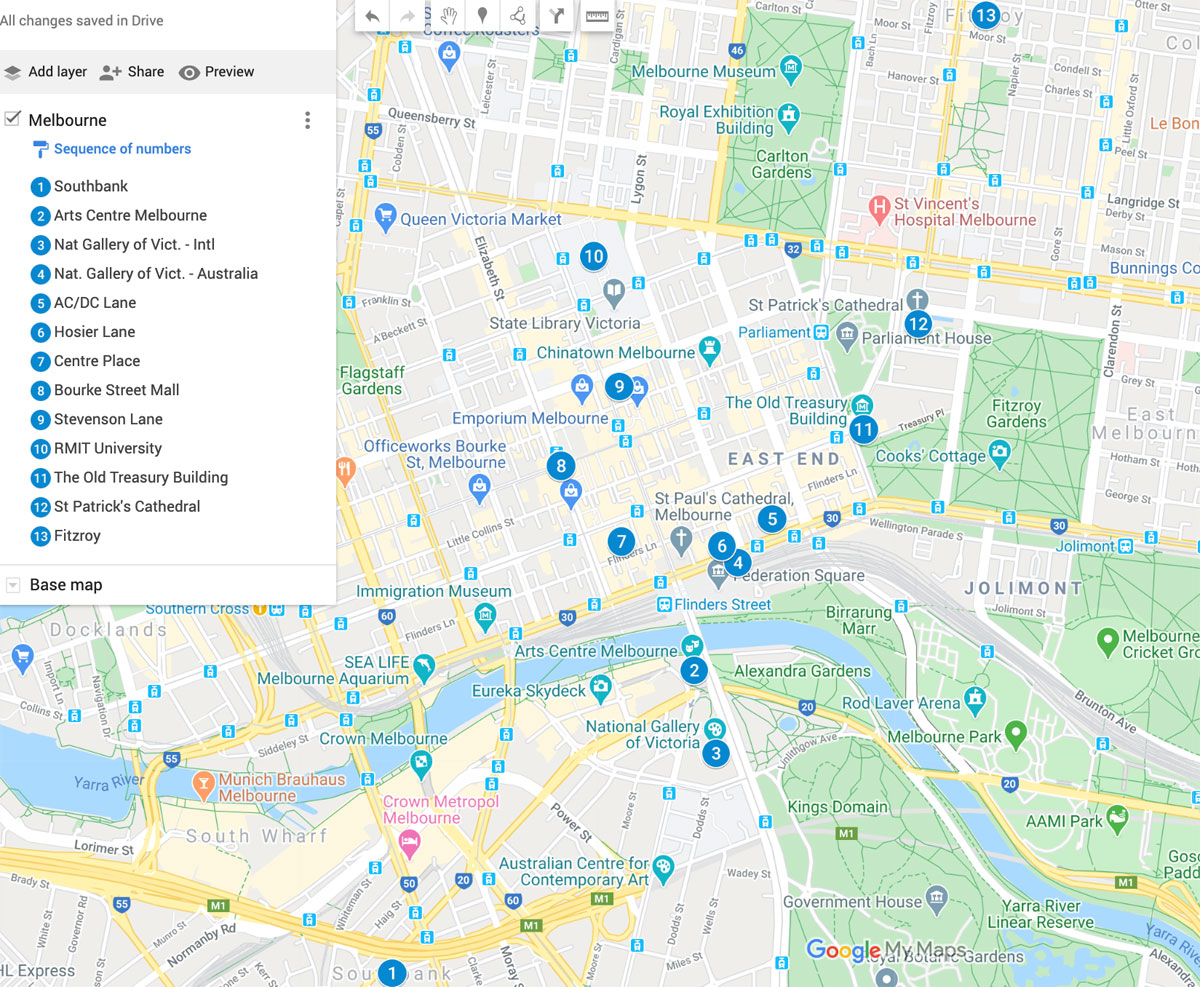 Where We Stayed in Melbourne – Southbank

We stayed in Shadow Play by Pepper Apartments in Southbank. It’s owned by the Accor company and is named after a Joy Division song. It’s a ten-minute walk to the Yarra River, where we caught the free tram. It has a large, well-equipped gym and the well-reviewed Edwin Wine Bar and Cellar. When I go back, I will stay in the Fitzroy neighborhood, which is not quite as convenient, but a hipper place to hang out at night.

Hosier Lane is Melbourne’s most visited lane for murals and graffiti. 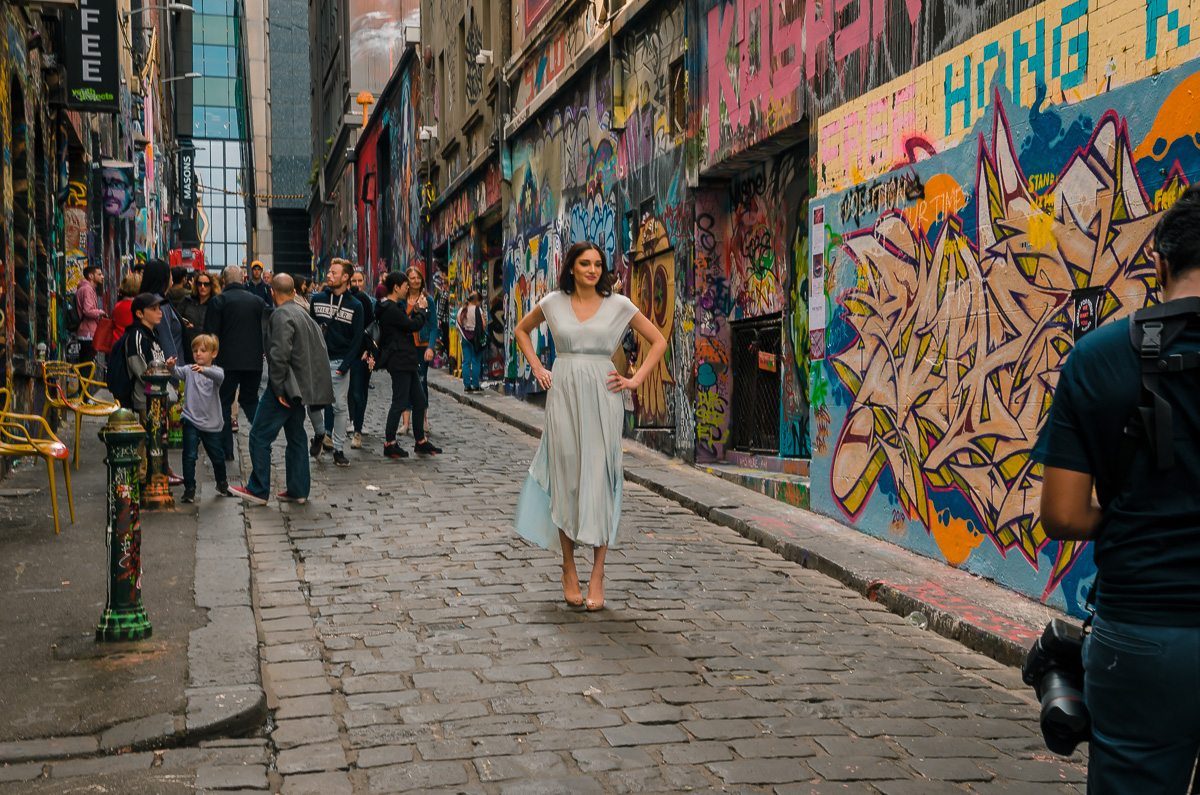 The walls of the short lane are filled with clever and striking murals, many with political implications. 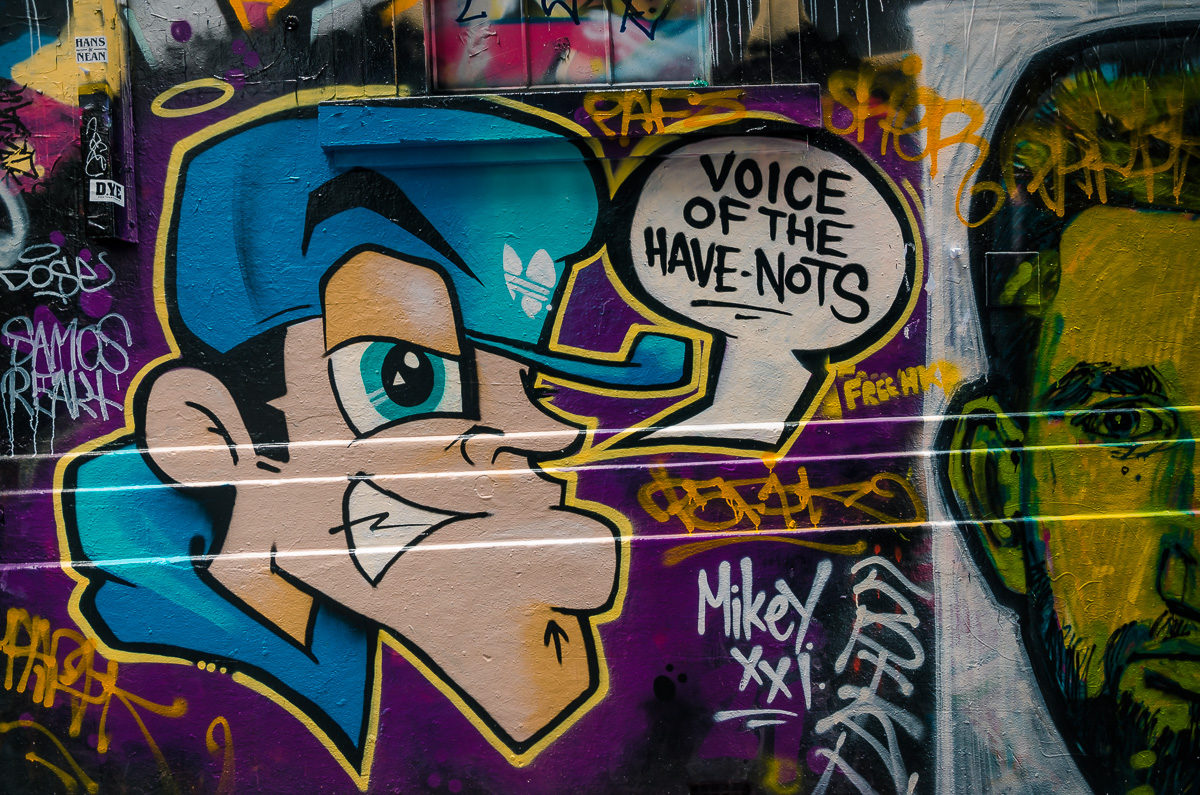 While checking out the terrific art in the area, we took advantage of nearby coffee shops for cappuccinos and lattes.

Melbourne’s AC/DC Lane is very close to Hosier Lane and named after the wildly successful Australian rock band AC/DC. The iconic band is the subject of many of the murals and street art. 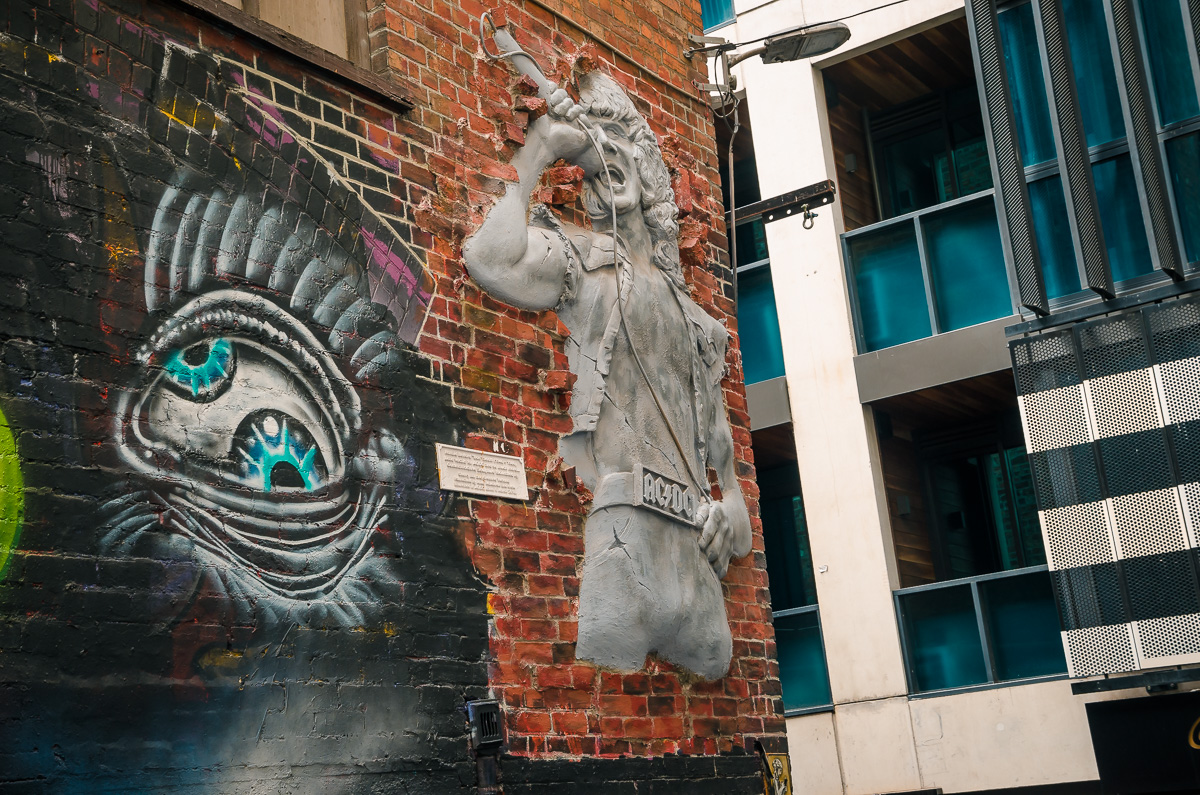 AC/DC Lane is a must-see for rock music enthusiasts. I liked this wall with tributes to The Clash, Led Zeppelin and Joy Division.

I also liked this apparent baby devil hovering over the backs of the seated.

This short lane is lined with bars and restaurants, including the Cherry Bar, which claims to be the best rock bar in the world. It is connected to Duckboard Place, which is an extension with more street art.

The National Gallery of Victoria, usually referred to as NGV, is Australia’s oldest and largest museum established in 1861 and visited by almost two million visitors a year. It consists of two buildings on each side of the Yarra River. The first is the NGV International, which has many galleries displaying international artwork. We went to the second one, across the street from Hosier Lane, named The Ian Potter Centre and called NGV Australia.

They have an extensive collection of Australian indigenous art. I liked this display of supernatural figures,  including Mimih Spirits, which have extremely thin and elongated bodies. They survive in rock crevices and caves and taught survival skills to the indigenous. 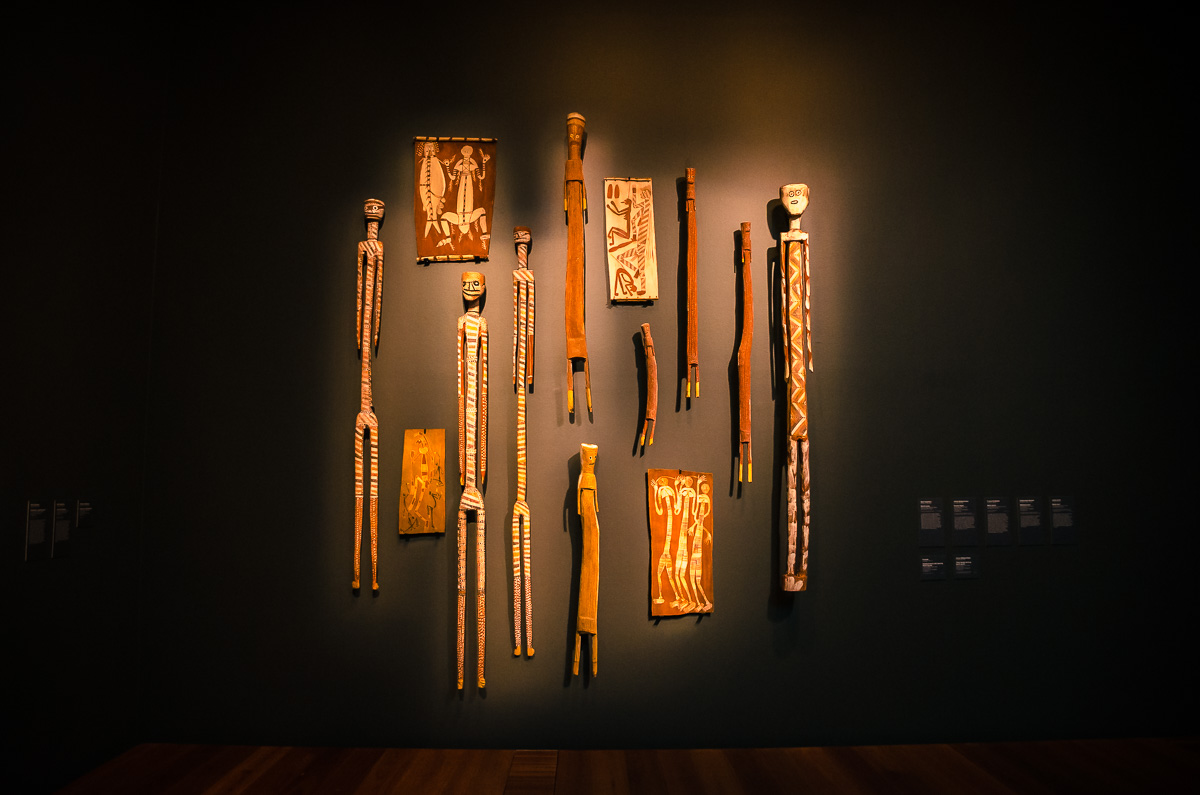 There was a temporary exhibit called, “Making Time” and included the video of Hannah Brontë’s “Umma’s Tongue – molten at 6000°.”

The description explained, “The word ‘umma,’ or mother, is repeated by a cast of Indigenous female rappers as a call to Mother Earth, who is embodied as the matriarchal figure of resistance in a dystopian, post-climate change landscape of the human industry.”

Melbourne’s Centre Place and Degraves Street combined are one pedestrian way with lively bars, shops, restaurants, and cafés. We enjoyed sitting there and watching people passing by… 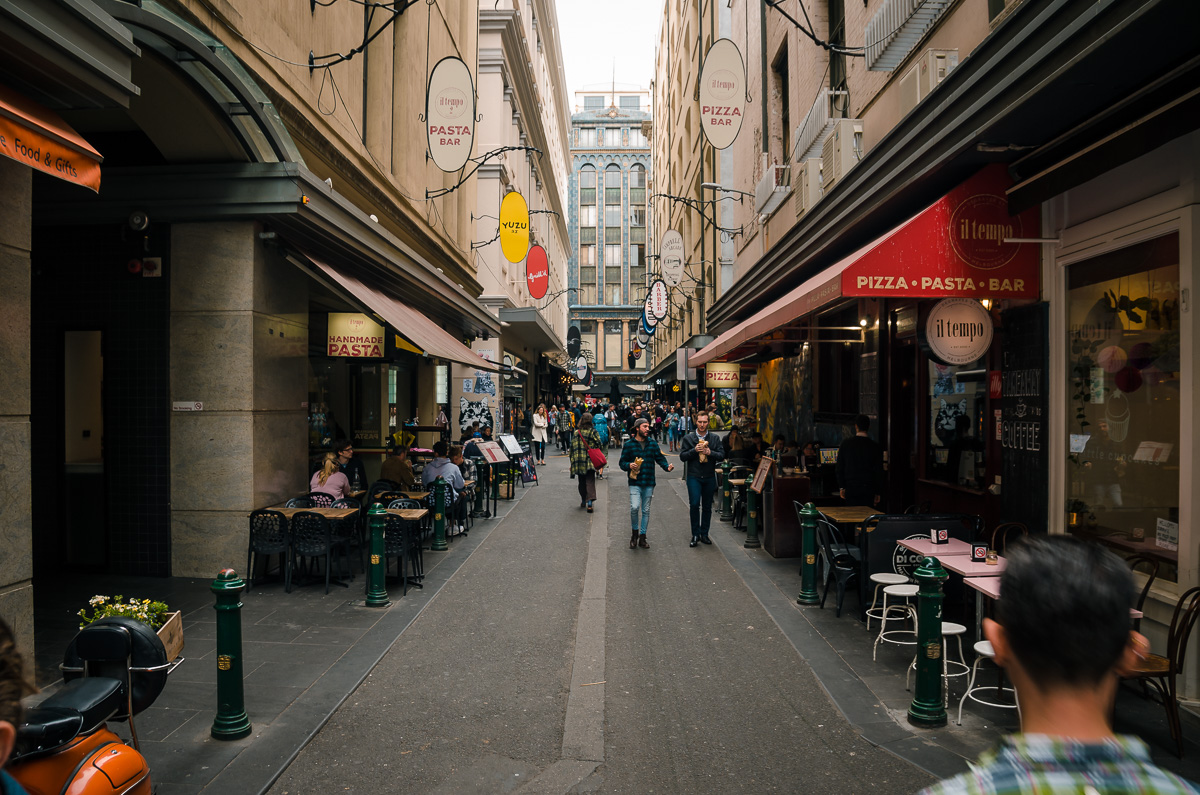 and the café customers. 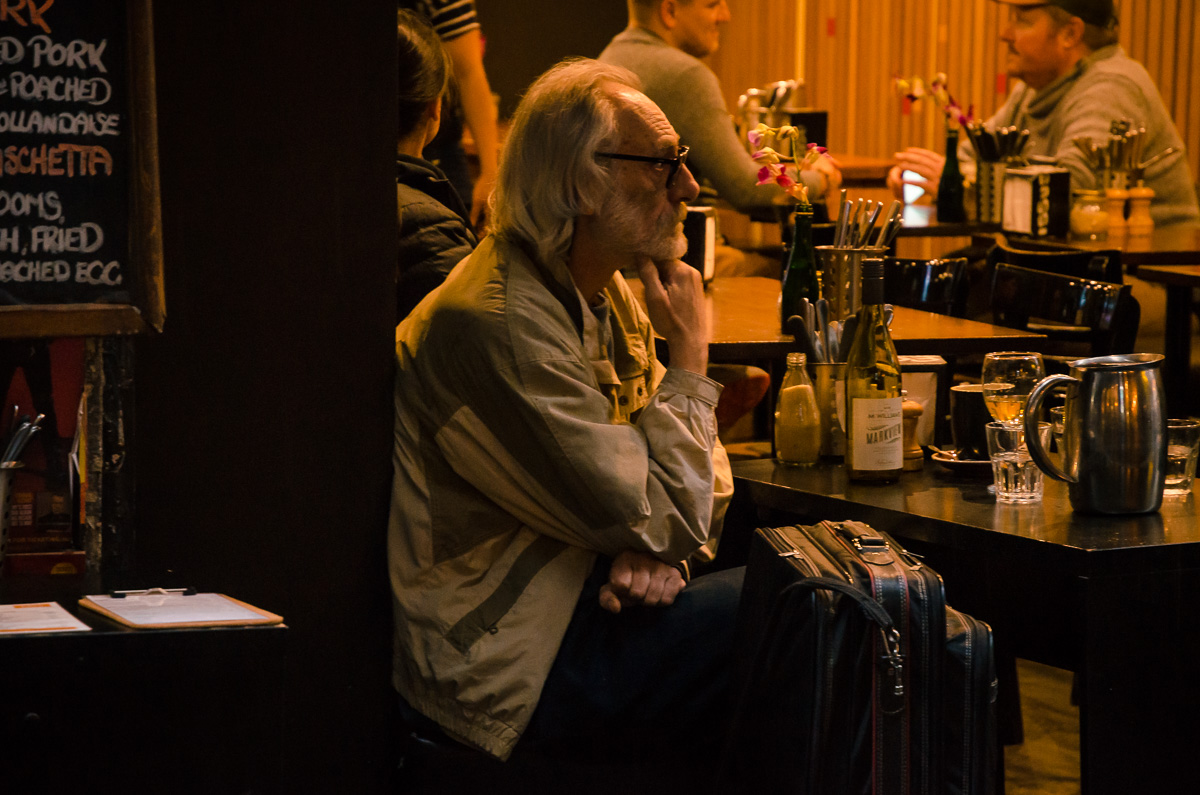 We liked our lunch at Eliana Lulu, a small restaurant serving hardy and tasty Spanish and Portuguese dishes.

While we aren’t shoppers, we walked on Bourke Street Mall to check out the upscale stores on each side of the tram tracks. 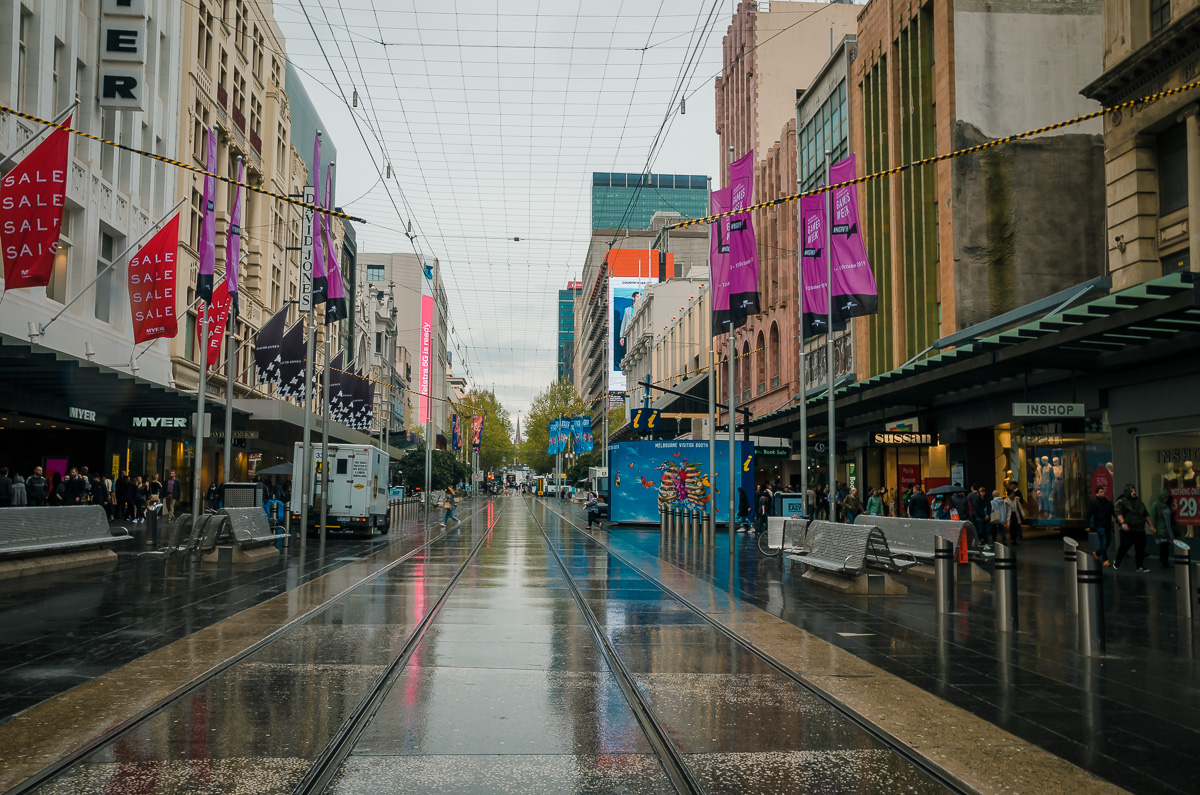 With an entrance on the Bourke Street Mall, Royal Arcade was built in 1861 and is the longest one in the country. It also has beautiful architecture. 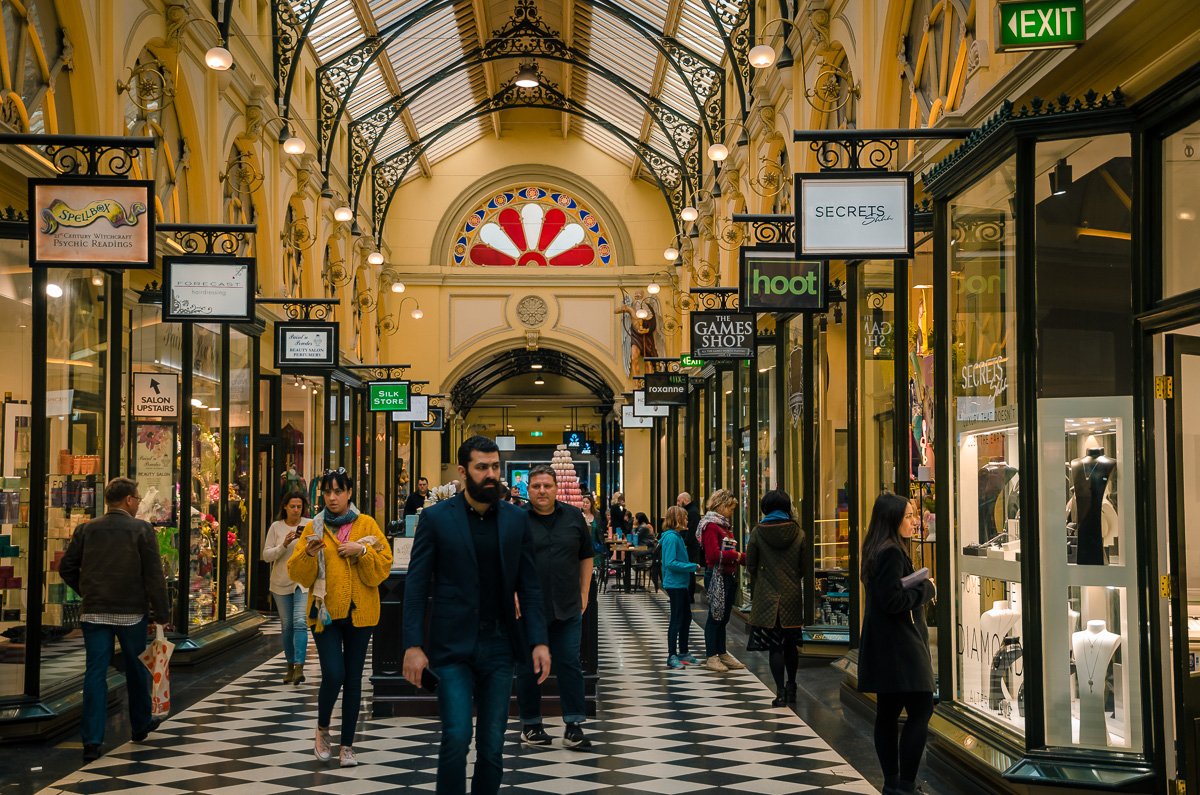 Stevenson Lane is a U-shaped stretch off Tattersall’s Lane. Together they have great street art and graffiti mixed with industrial fixtures. 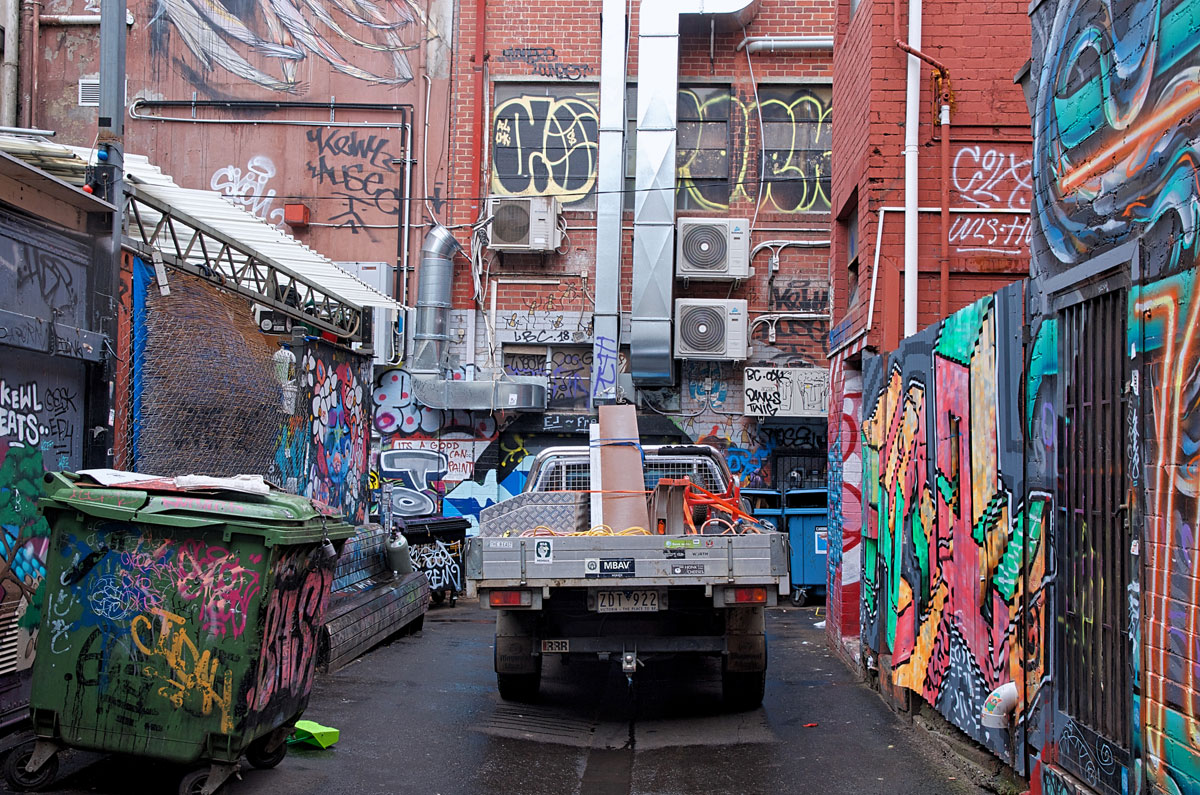 Even the bars there are adorned with wall murals. 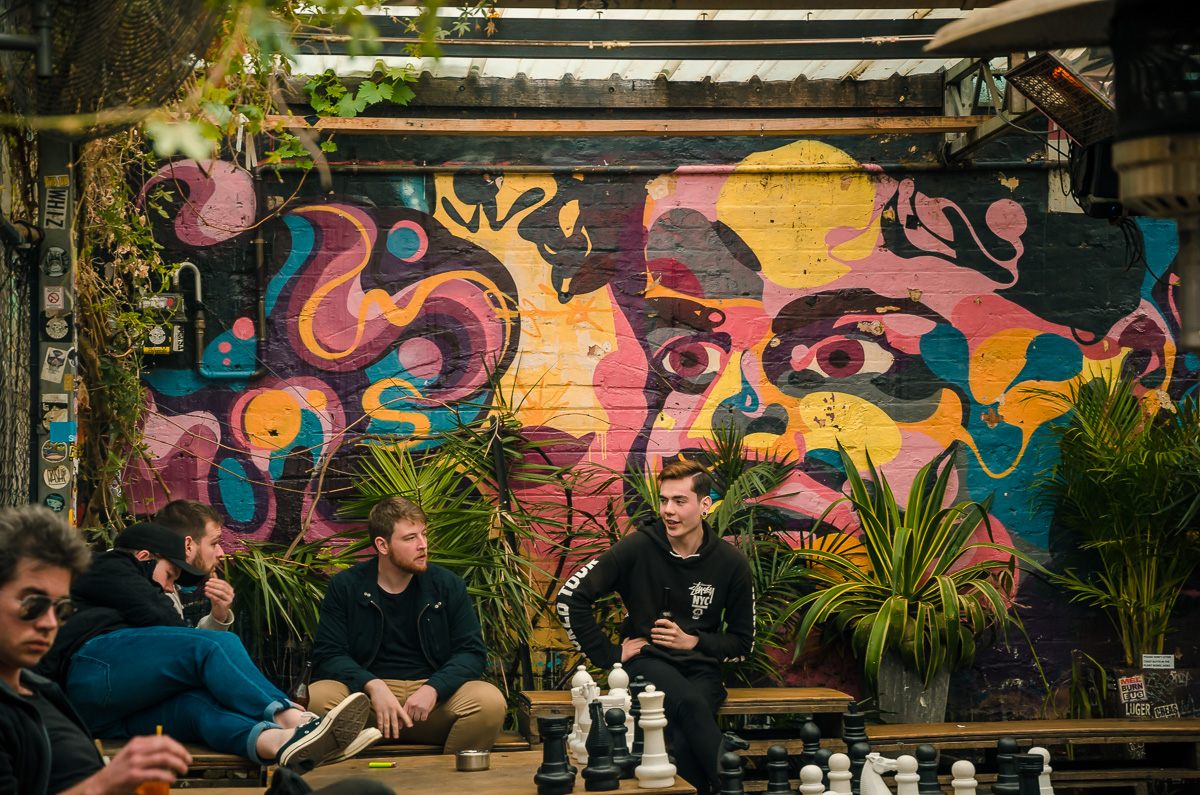 The Old Treasury Building was designed in the 1850s by then 19-year old Architect John James Clark. It was initially built to store gold bullion from the State of Victoria Gold Rush. The building’s interesting style is an Australian take on classical Renaissance architecture.

It is open to the public to view artifacts and documents chronicling key historical events in Victoria’s history.

The Cathedral Church and Minor Basilica of Saint Patrick is the seat of the archbishop and once visited by Pope John Paul II. It has the classical Latin Cross layout with the altar facing east when sunlight streams through in the morning. 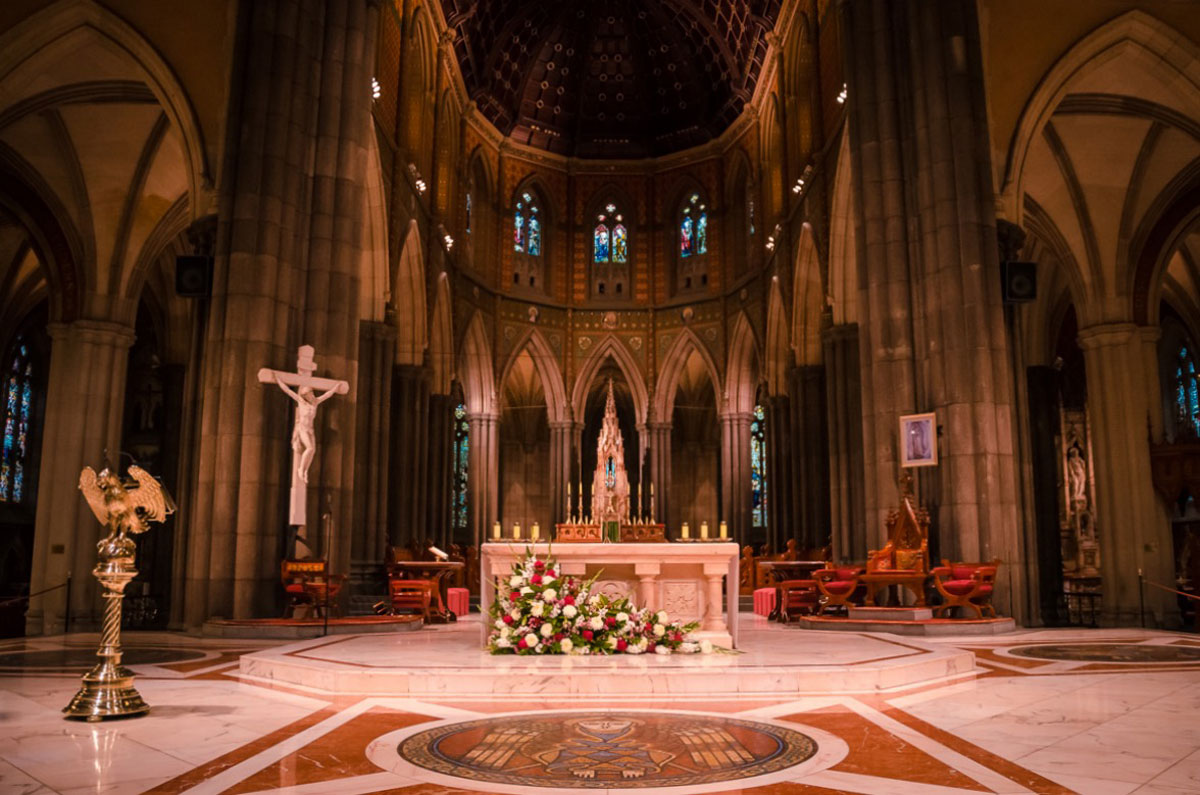 This imposing structure is the largest and tallest church in Australia.

A few kilometers from the city center is the bohemian Fitzroy neighborhood. It was Melbourne’s first suburb and now known for its cafes, street arts, and most especially its hipster and multi-cultural vibe. 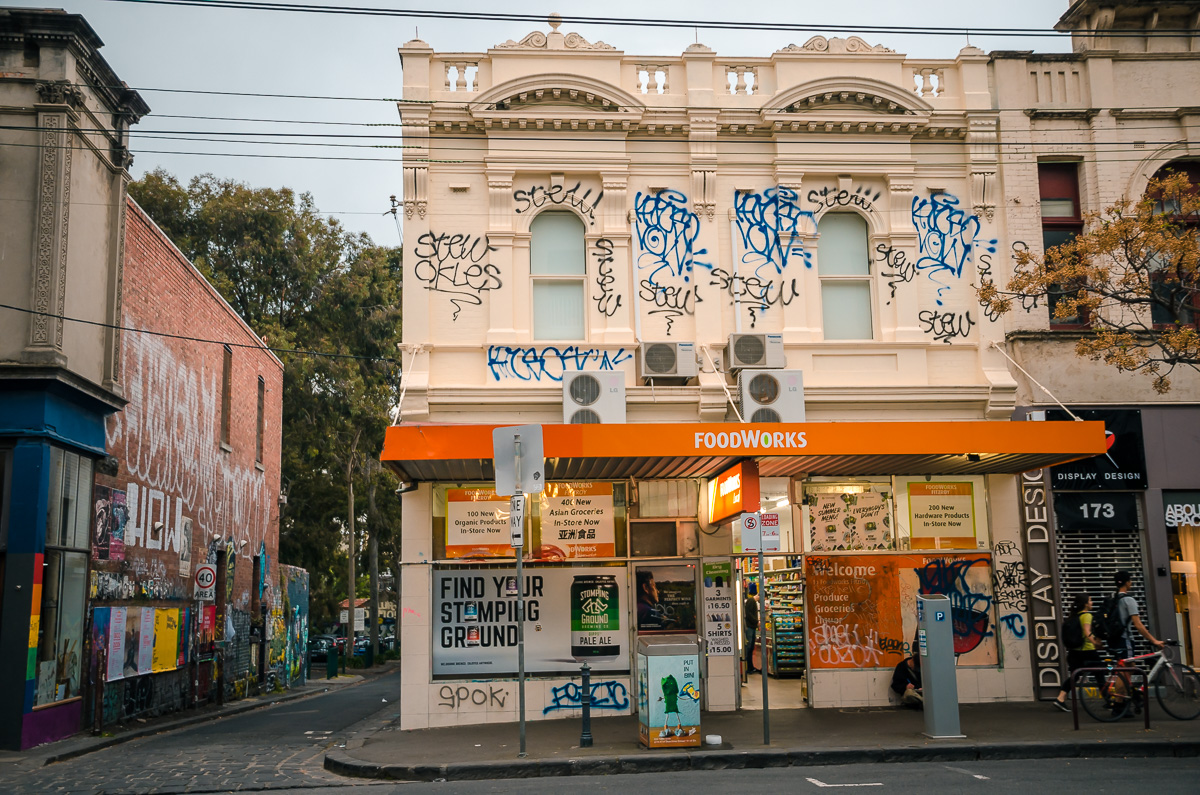 Khadija and I went to The Old Bar to hear live music.

While waiting at the bar, we heard the metal band sound-checking, and we knew it was too loud for us and left. However, it is a cozy place and an excellent venue for live music.

One of the fun things about Melbourne is just walking around at night, including stopping at one of the lively outdoor bars…

and meeting locals on Swanson Street, both animate and inanimate.

Melbourne Attractions We Wish We Went To

If we had two more days in Melbourne, we would have tried to go to:

We also would’ve gone to an Australian Football League game (sort of a cross between rugby and American football), but it wasn’t in season.

We learned that the alternative-rock, psychedelic band, The Flaming Lips, was at the Melbourne Art Centre. We were able to snag tickets and enjoyed a sold-out, musical spectacle worthy of the artsy Melbourne attitude.

We thoroughly enjoyed Melbourne and were in sync with its fun-loving culture.