Montenegro is a Balkan country with rugged mountains, medieval villages and a narrow strip of beaches along its Adriatic coastline. The Bay of Kotor, resembling a fjord, is dotted with coastal churches and fortified towns such as Kotor and Herceg Novi. The name Montenegro was first used to refer to the country in the late 15th century. After falling under Ottoman rule, Montenegro regained its independence in 1696 under the rule of the House of Petrović-Njegoš, first as a theocracy and later as a secular principality.

Montenegro’s surface runoff in the north is carried away by the Lim and Tara river systems, which enter the Danube via the Drina River, which forms the border between Bosnia and Herzegovina and Serbia. In southern Montenegro, streams flow toward the Adriatic. Montenegro’s lower areas have a Mediterranean climate, with dry summers and mild, rainy winters. Temperature varies greatly with elevation. Podgorica, lying near sea level, is noted for having the warmest July temperatures in the country, averaging 81 °F. 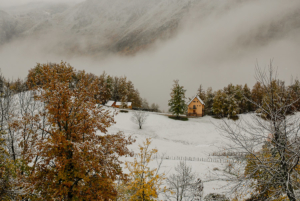