Serbia officially the Republic of Serbia, is a landlocked country in Southeastern and Central Europe, situated at the crossroads of the Pannonian Plain and the Balkans. Bounding the country to the west are the Republic of Bosnia and Herzegovina and the Slavonian region of the Republic of Croatia. Serbia adjoins Hungary to the north, Romania and Bulgaria to the east, North Macedonia to the south, and Montenegro to the southwest. Differences in elevation, proximity to the sea, and exposure to wind lead to significant climatic differences within Serbia. In general, however, the climate is continental, with cold, relatively dry winters and warm, humid summers. The difference between average temperatures in January and July in Belgrade is 40 °F.

Most of the population of Serbia and neighboring Montenegro is of South Slavic origin. Slavic tribes entered the region from the north during the 5th to 7th century CE, encountering Illyrian-speaking peoples. Although the Slavs acculturated large numbers of Illyrians, many of the latter retained their distinctive language and customs in the complex hills and valleys of present-day Albania. 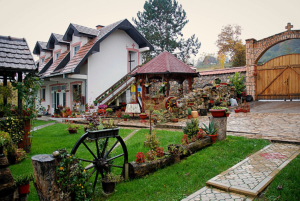