Uzbekistan is a Central Asian nation and former Soviet republic. It’s known for its mosques, mausoleums and other sites linked to the Silk Road, the ancient trade route between China and the Mediterranean. Uzbekistan is part of the Turkic world, as well as a member of the Organization of Turkic States. The Uzbek language is the majority-spoken language in Uzbekistan; other languages include the Russian language and the Tajik language.

The Uzbek economy is in a gradual transition to the market economy, with foreign trade policy being based on import substitution. In September 2017, the country’s currency became fully convertible at market rates. Marked aridity and much sunshine characterize the region, with rainfall averaging only 8 inches annually. Most rain falls in winter and spring, with higher levels in the mountains and minimal amounts over deserts. The average July temperature is 90 °F, but daytime air temperatures in Tashkent and elsewhere frequently surpass 104 °F. Bukhara’s high summer heat contrasts with the cooler temperatures in the mountains. 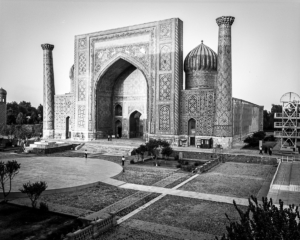