Vanuatu is a South Pacific Ocean nation made up of roughly 80 islands that stretch 1,300 kilometers. The islands offer scuba diving at coral reefs, underwater caverns and wrecks such as the WWII-era troopship SS President Coolidge. Harborside Port Vila, the nation’s capital and economic center, is on the island of Efate. A diverse relief—ranging from rugged mountains and high plateaus to rolling hills and low plateaus, with coastal terraces and offshore coral reefs—characterizes the islands. Sedimentary and coral limestones and volcanic rock predominate; frequent earthquakes indicate structural instability. Active volcanoes are found on several islands, including Séré’ama on Vanua Lava, Manaro on Aoba, Garet on Santa Maria, the twin volcanic vents of Benbow and Marum on Ambrym, and Yasur on Tanna.

The indigenous population, called ni-Vanuatu, is overwhelmingly Melanesian, though some of the outlying islands have Polynesian populations. There are also small minorities of Europeans, Micronesians, Chinese, and Vietnamese. Roughly three-fourths of the population lives in rural areas, but since independence the urban centres of Luganville and Port-Vila have drawn a significant number of people attracted by better opportunities. 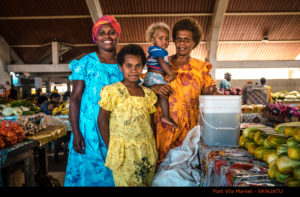 In our bungalow on the remote Tanna island, we saw and heard the Mt. Yasur volcano erupting several times every hour. The next day we 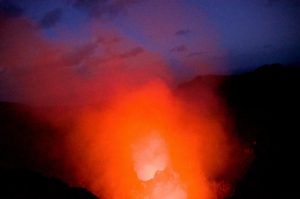 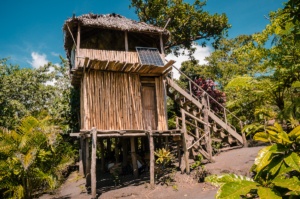