One of the reasons we came to Australia, like everyone else, was to see kangaroos. We had been here over two weeks with no real success. We did not expect to see them in the cities of Sydney and Melbourne. We sort of saw them in the Red Centre, but they were hard to make out because it was dark, and they were far away and blended into the landscape. The Great Ocean Road was our last chance.

We saw none on sprawling farmland full of sheep and cattle. 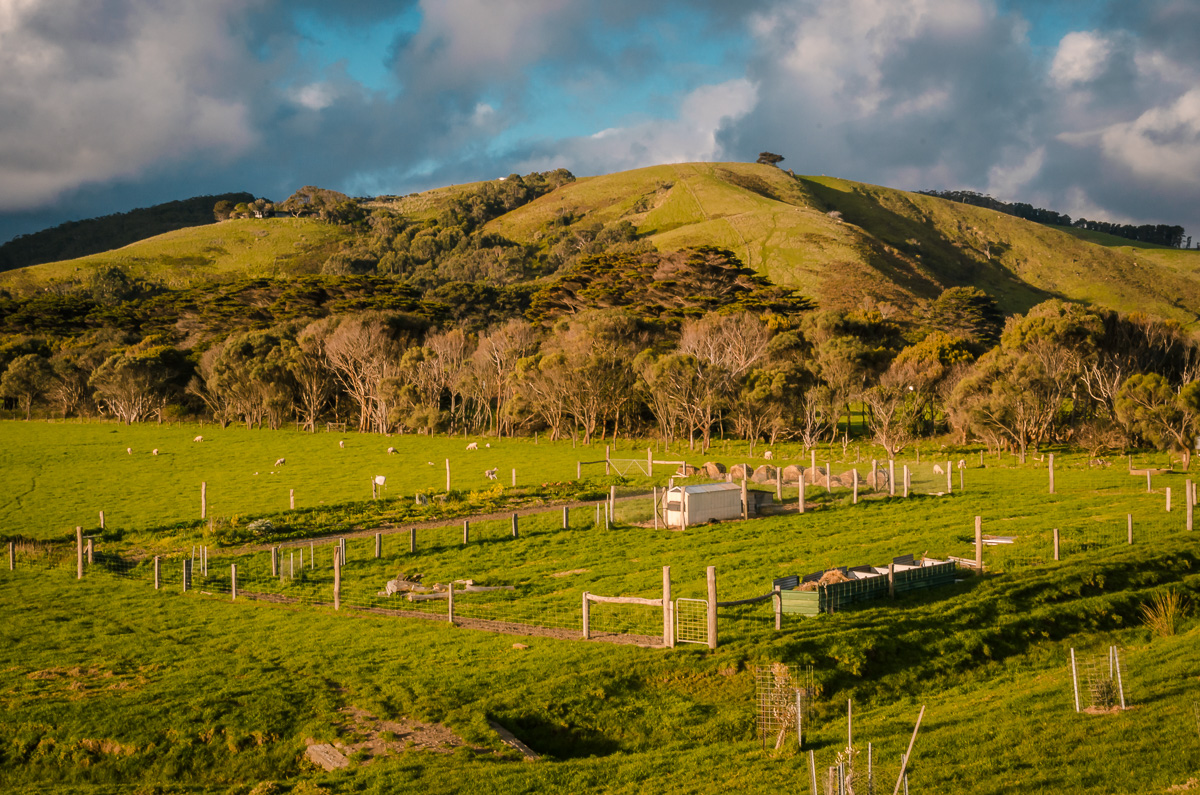 On our first day of hiking on the Great Ocean Walk, we saw none. 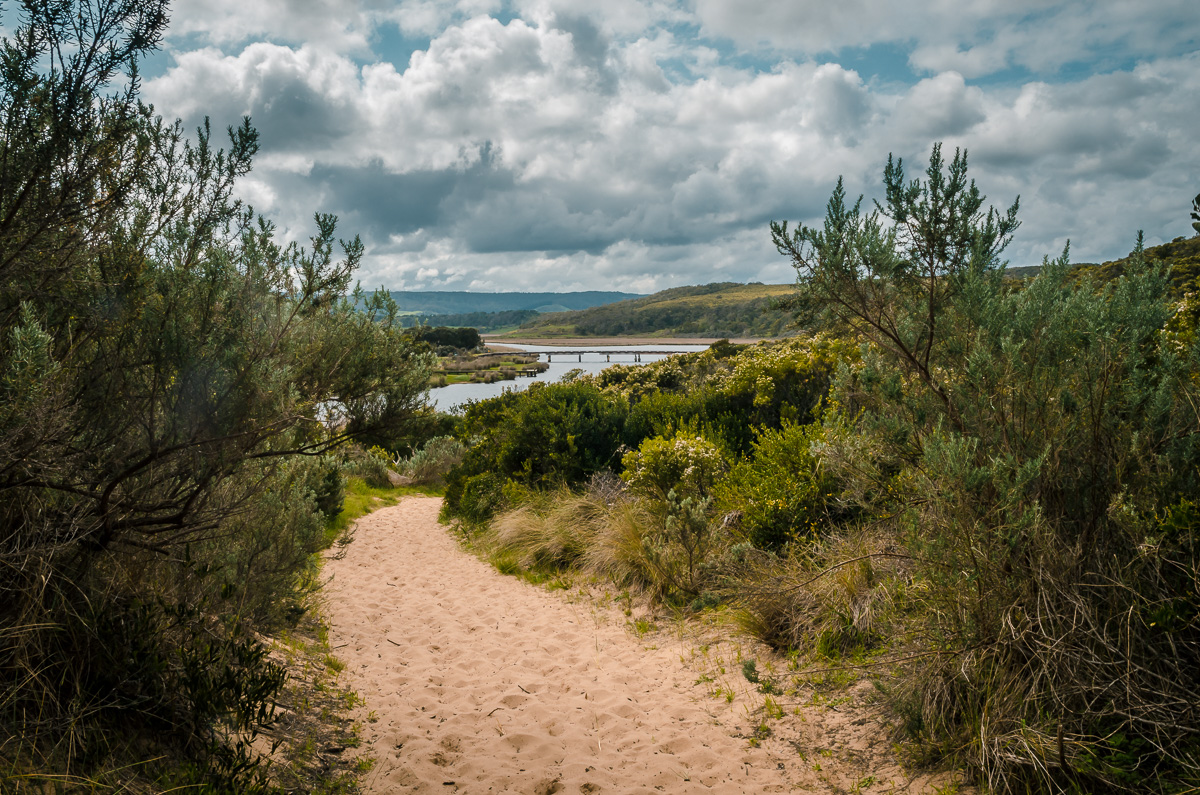 By the Cape Otway Lightstation, we saw one, but it was made of discarded farm equipment.

On our second day of hiking, we saw them at a distance. 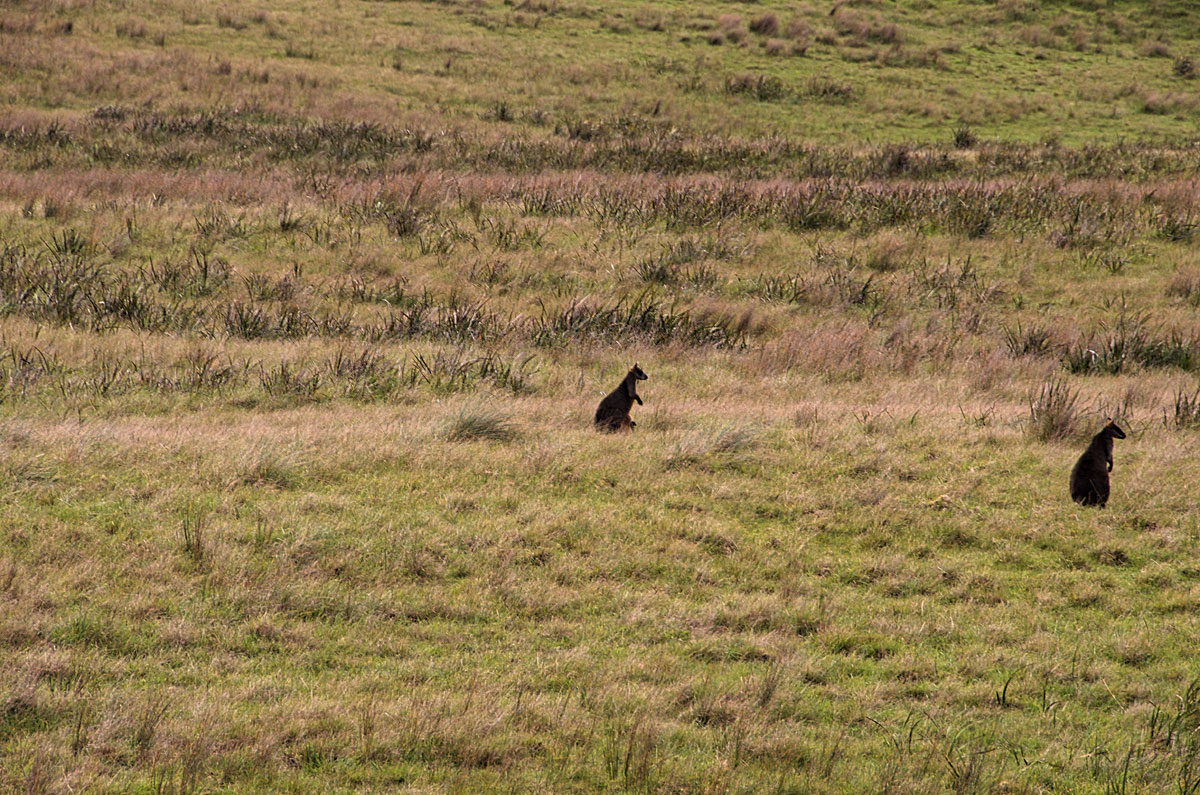 A little later, we finally saw one up close, watching us from behind grass and branches.

Actually, it was a wallaby, a smaller version of a kangaroo, and a different species. At that time, we didn’t know the difference, but we were ecstatic to see one of Australia’s iconic animals.

Why visit the Great Ocean Road?

In September and October 2019, my wife Khadija and I, along with our friends Peter and Caitlin, spent 18 days in Australia. Everyone wanted to go to the Red Centre, Sydney, and Melbourne, and one more different and interesting place. When we saw the Great Ocean Road had a long ocean coast, with stunning stone formations and native animals like kangaroos and koalas, we all agreed we should go. It was also a place to hike in a temperate climate, in contrast to the hot, arid Red Centre. As you can see, Peter and Caitlin needed sweaters and coats for the hikes. 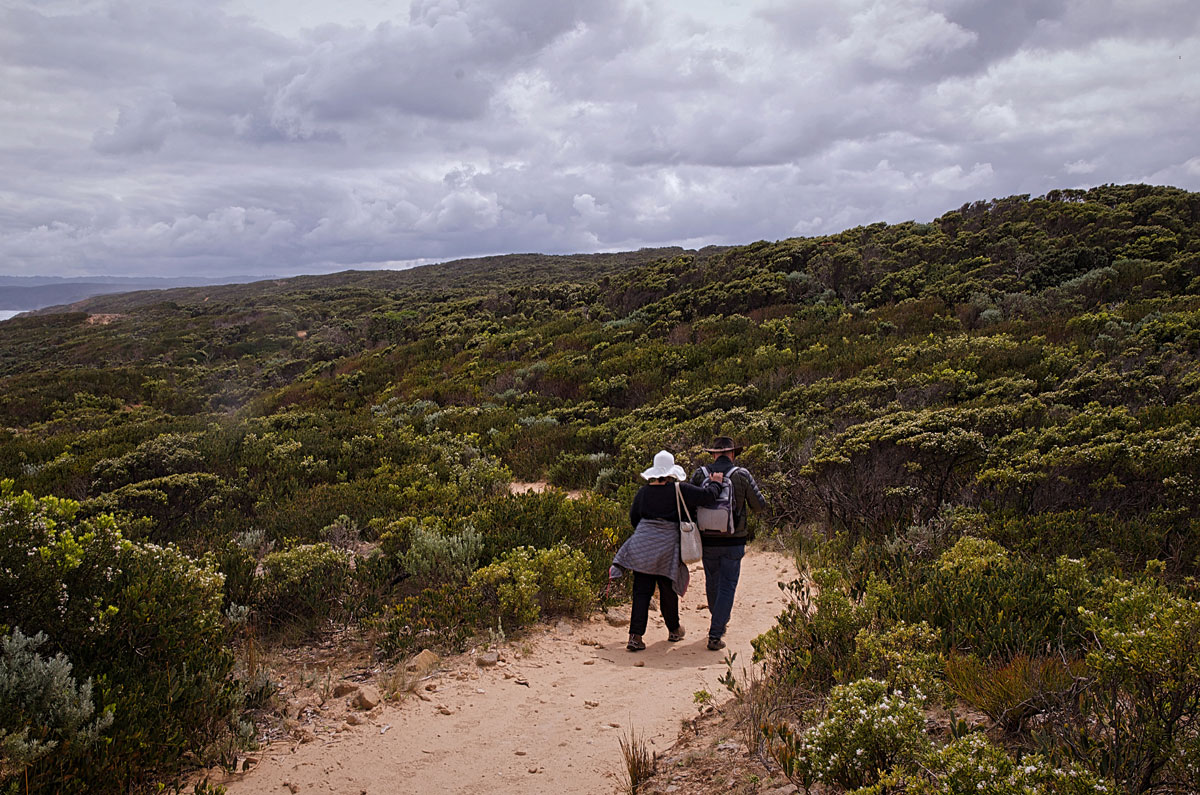 Where is the Great Ocean Road?

The Great Ocean Road is 243 km (151 mi) long and about a 90-minute drive from Melbourne. The east end is the Surf Coast Highway of the city of Torquay, and the west end is Princes Highway in Allansford. The following map includes points we visited. 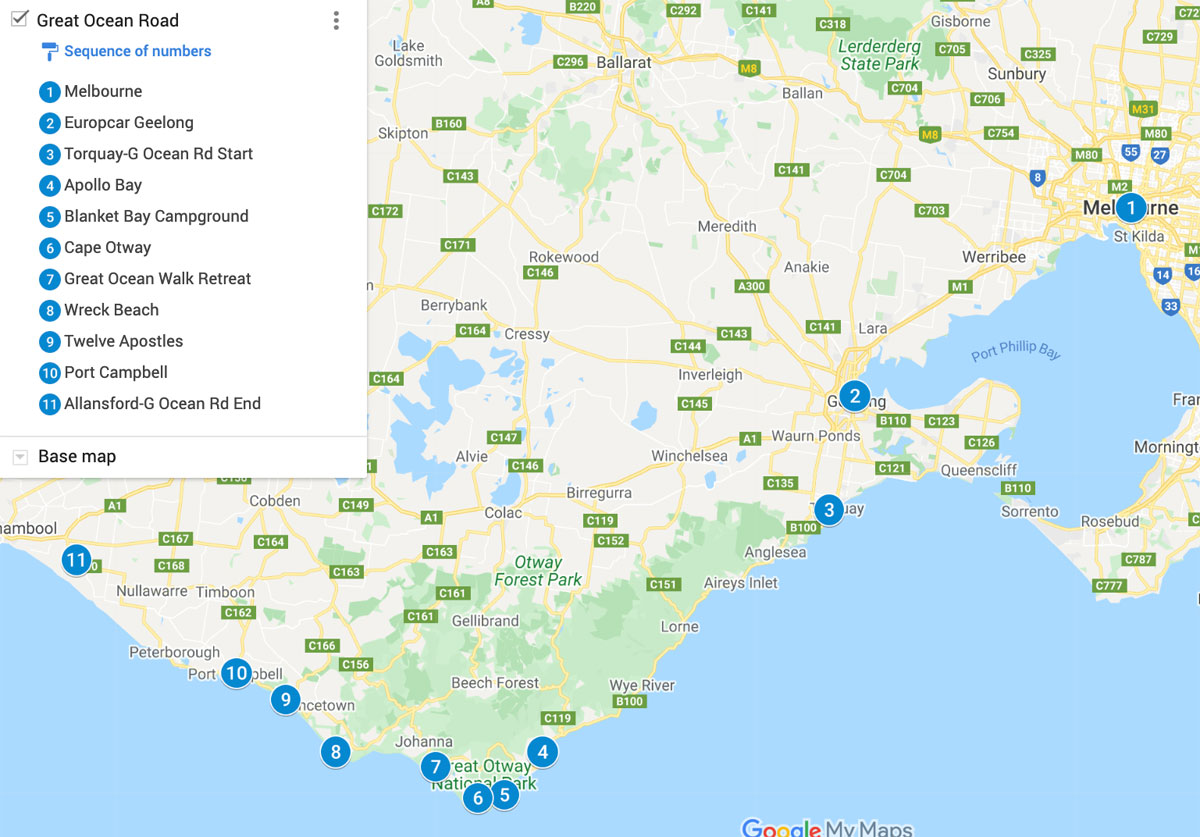 Is the Great Ocean Road Safe?

There is virtually no crime and violence. When driving there, be extra careful where roads become narrow with sharp bends. Also, Australia roads are left-driving, unlike the majority of the world. I always rent an automatic vehicle if possible, to make it as easy as possible on unfamiliar roads.

Getting Around the Great Ocean Road

Cars are by far the best way to travel on the Great Ocean Road because taxis are not easy to get in many circumstances and limited public transportation. For bicyclists, it’s an excellent destination, except there’s not much shoulder on the road, and some drivers might not see them because of the curves. You can also go on organized tours that provide the vehicles for various itineraries.

We hiked two segments of the Great Ocean Walk (next to the Great Ocean Road and by the coast), and each one was about 10 km (6 mi). We devised a method to access them by renting two cars and driving both to the endpoint of the hike. Then we took one car to the beginning of the trail. When we were finished, we drove the car we left at the end of the trail and picked up the other vehicle.

We rented the cars from Europcar in Geelong. From Melbourne, we used a van-taxi to get there. We could’ve used the train, but it didn’t save that much money because we had to buy four tickets. It also would’ve been a much bigger hassle with our luggage.

Where Did We Stay on the Great Ocean Road?

We spent four nights at The Great Ocean Walk Retreat, which has three large apartments within a 200-acre sheep and cattle farm and was centrally located. The bucolic scenery in the area was fabulous. 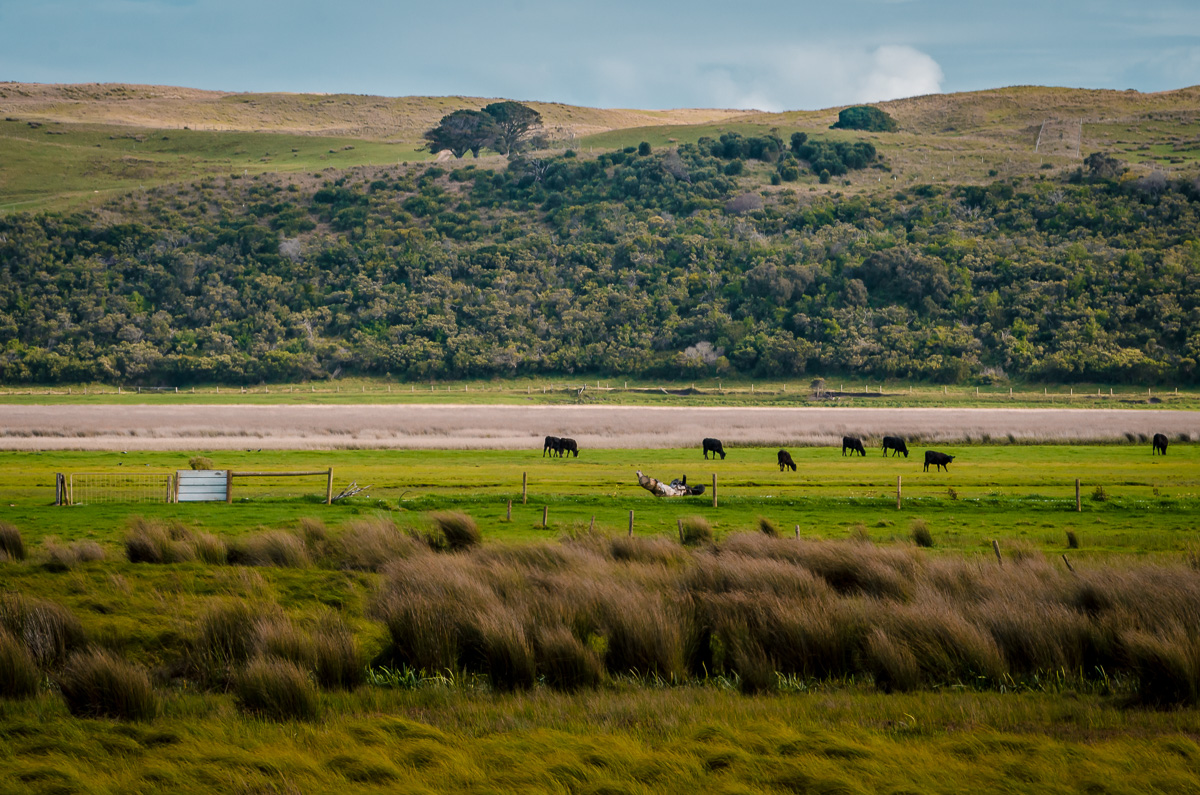 The owners provided free fresh eggs from their farm, which was a nice touch.

For the first couple of hours on the Great Ocean Road, on the way to Apollo Bay, the road hugs the coast.

We admired the many scenic views and stopped a few times to photograph. 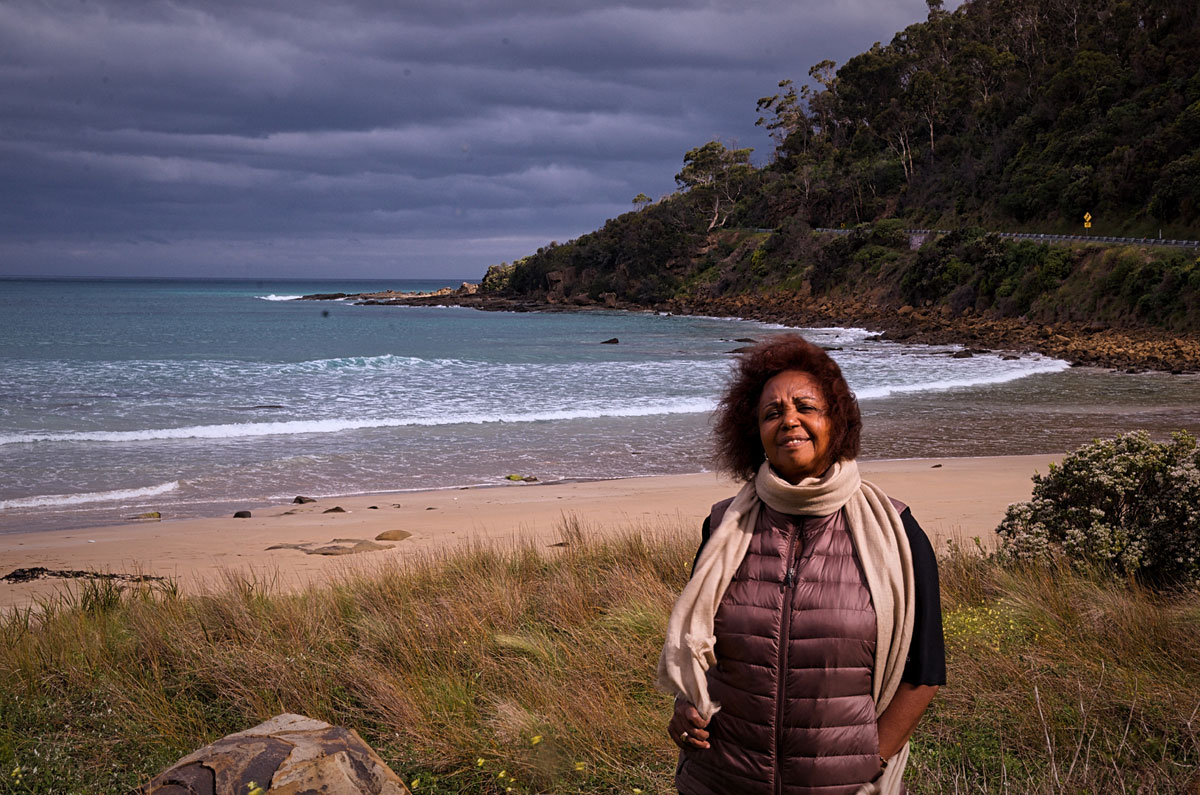 Apollo Bay is a commonplace to grab a meal and fill up your car. We ate at La Bimba, which is on the second floor of a storefront and serves locally produced meats and seafood. A friend recommended the place, and she didn’t steer us wrong. After dinner, we walked around the charming town and bought a few things at the general store. If it hadn’t been so late, we would have walked along the harbor.

The 10-kilometer trek from Blanket Bay to Cape Otway weaves through forested areas and coastal sceneries and is dotted with wildlife waiting to be photographed. This moderate-level trail is the third stage of the eleven-staged Great Ocean Walk that runs from Apollo Bay to the Twelve Apostles.

The trail starts next to the Blanket Bay campground. We were asked to clean our shoes on the brush on this metal bridge to help prevent the spread of Cinnamon Fungus, a plant disease that infects the roots of some plants and trees. 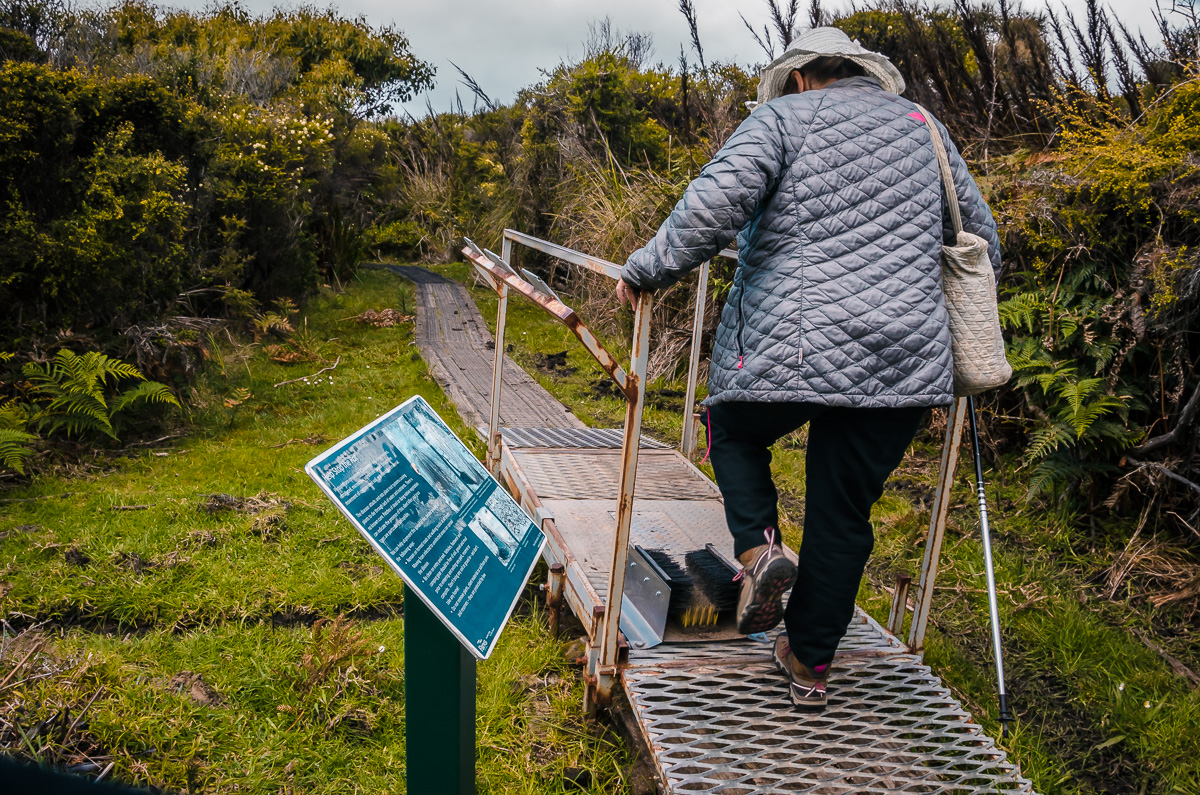 Initially, the trail clings to the coast. 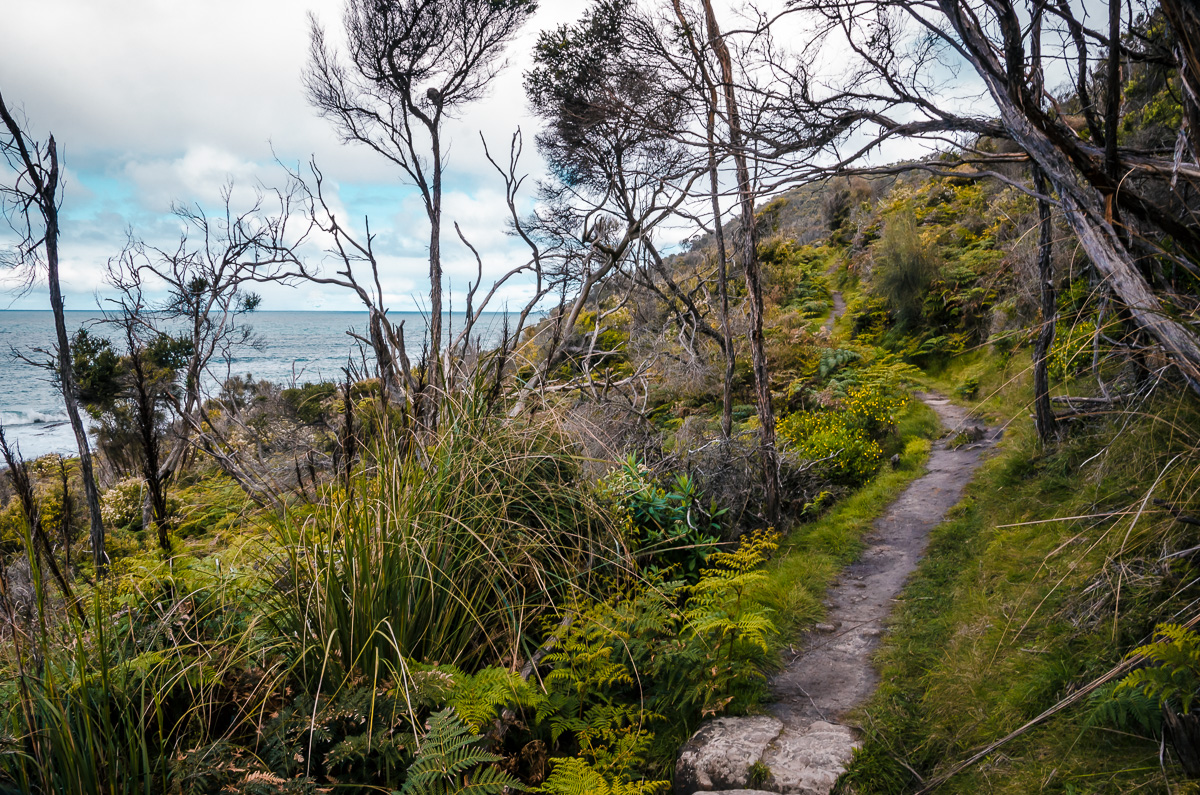 After an hour of walking, in clear view, we saw a koala sitting on a tree. What stood out to me was the small eyes and how slow they climb under non-threatening conditions. 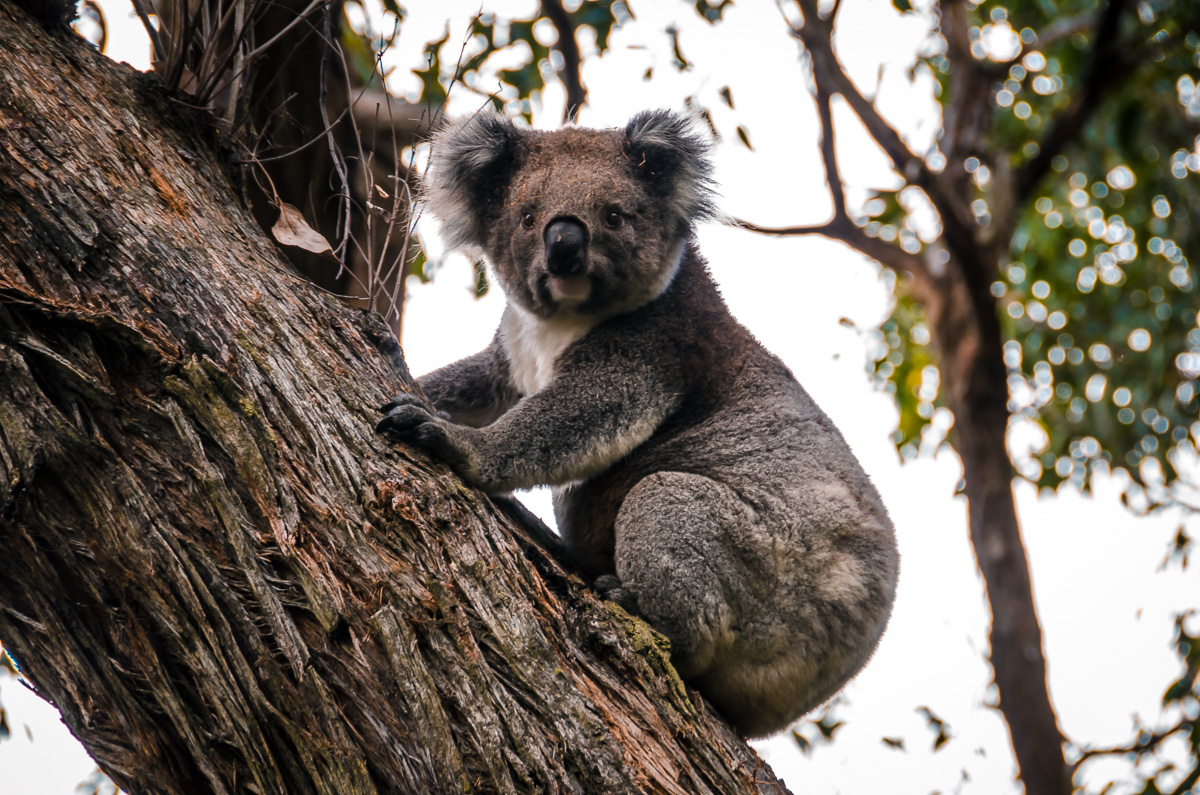 A short time afterward, we saw a pied currawong, a blackbird with yellow eyes that’s familiar in this area. 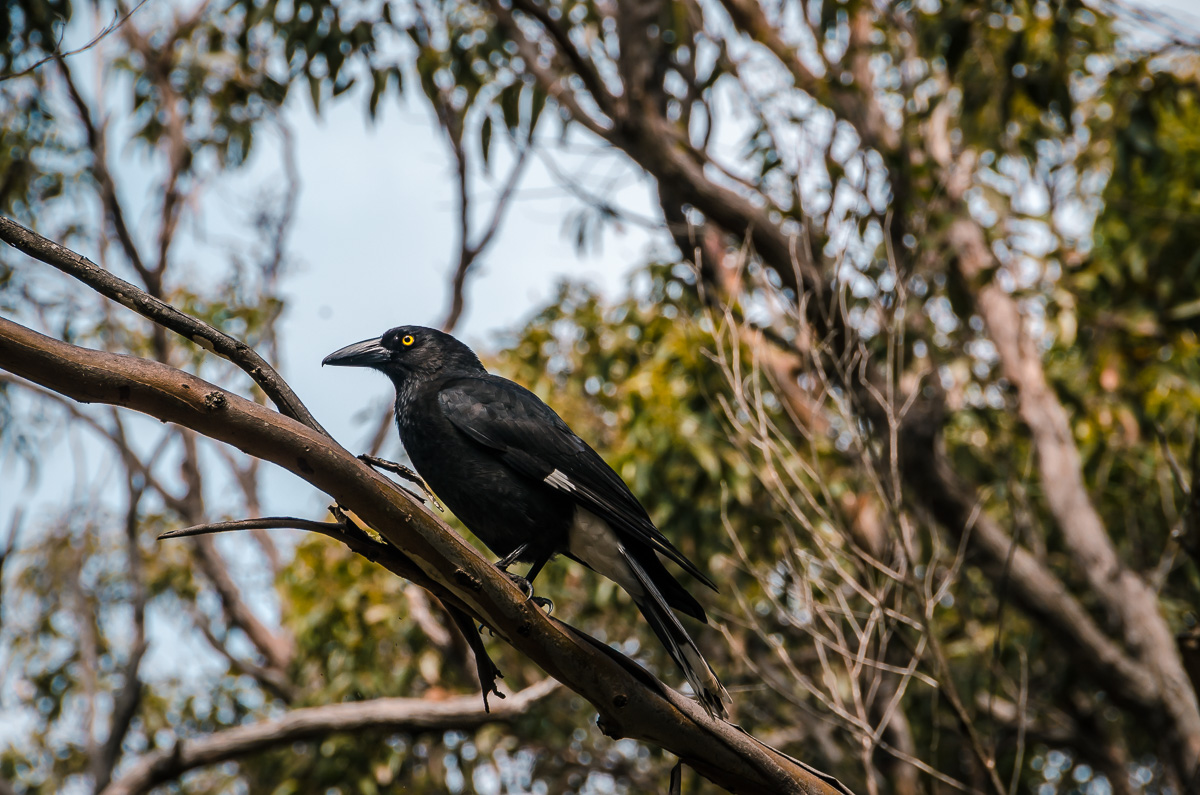 Walking a while longer, we arrived at Parker Inlet, where the Parker River expands to a wide basin and empties into the Bass Strait.

We rested here and had some snacks while admiring the cove.

Soon we had a choice to walk on the beach or continue over a high hill. We chose the latter and were rewarded by stunning views. 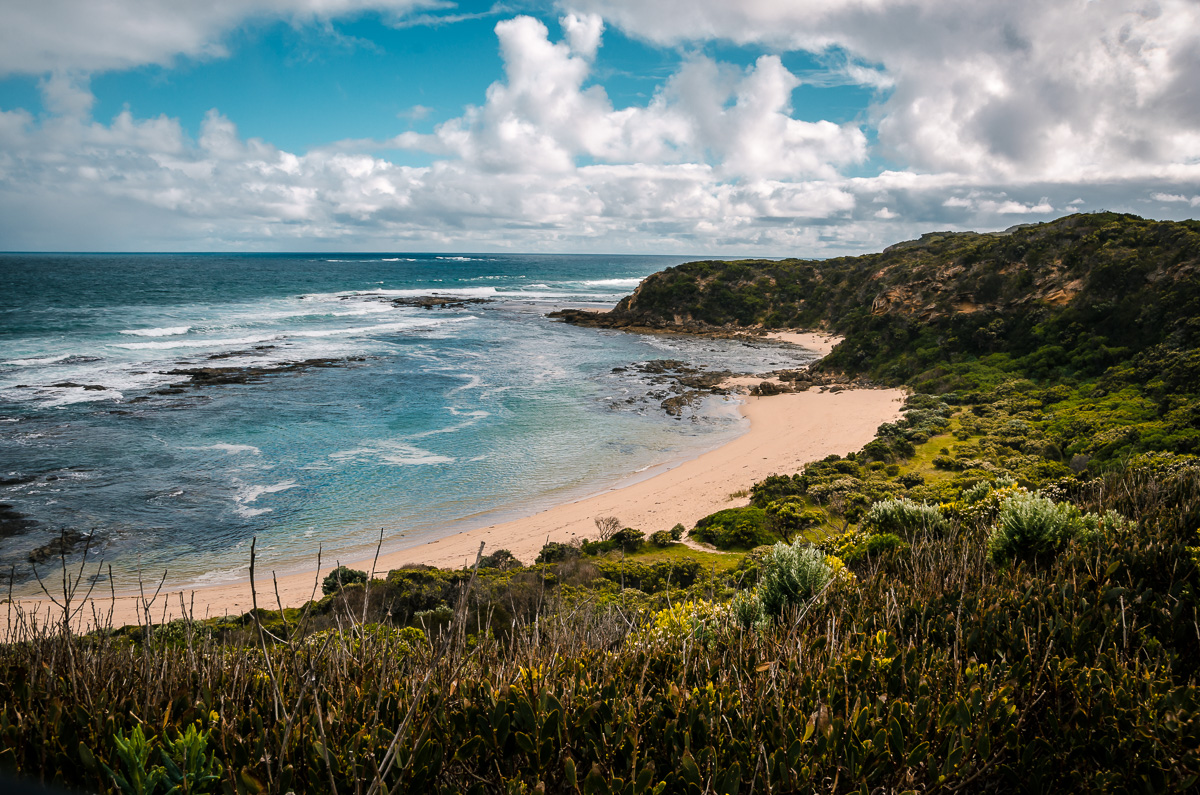 On the trail, we kept seeing porcupines burrowed into the ground. Finally, we saw one crossing the road. 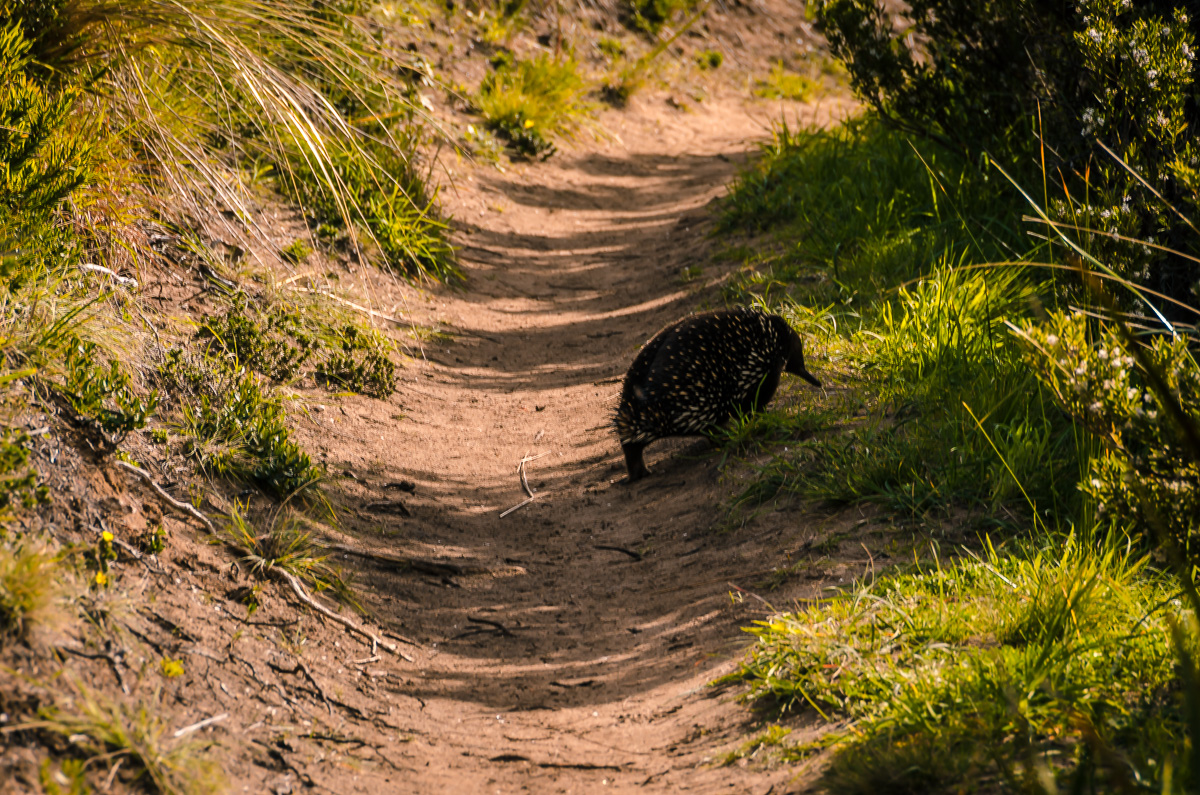 I was later informed on Instagram, we saw echidnas (pronounced uh·kid·nuhs) and not porcupines. They are also called spiny anteaters and are egg-laying mammals. The only other mammal which lays eggs is the platypus, which is also native to Australia.

Segment 3 of the Great Ocean Road ends, and Segment 4 starts at the Cape Otway Lightstation. Built in 1848, it still stands prominently. 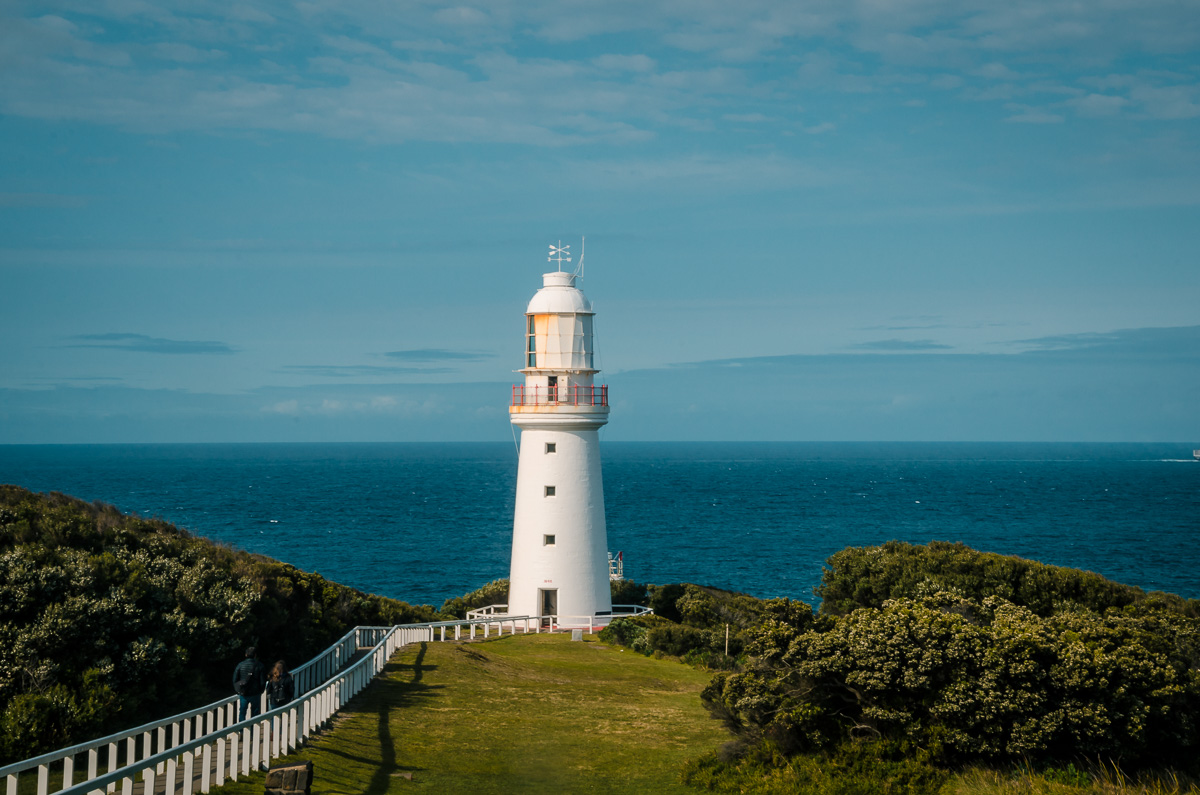 The light station was decommissioned in 1994 and replaced by a low powered solar light in front of the tower. Each lighthouse has a flashing pattern, and here it’s three white flashes every 18 seconds.

On the road to the lighthouse, we saw a shocking sign that alerted us of other animals on the cape.

The trail from Cape Otway to Aire River Camp is the 4th stage and is almost 10 km (6 mi). The trail weaves near and away from the coast and, at times, is covered by the forest in an eerie way. 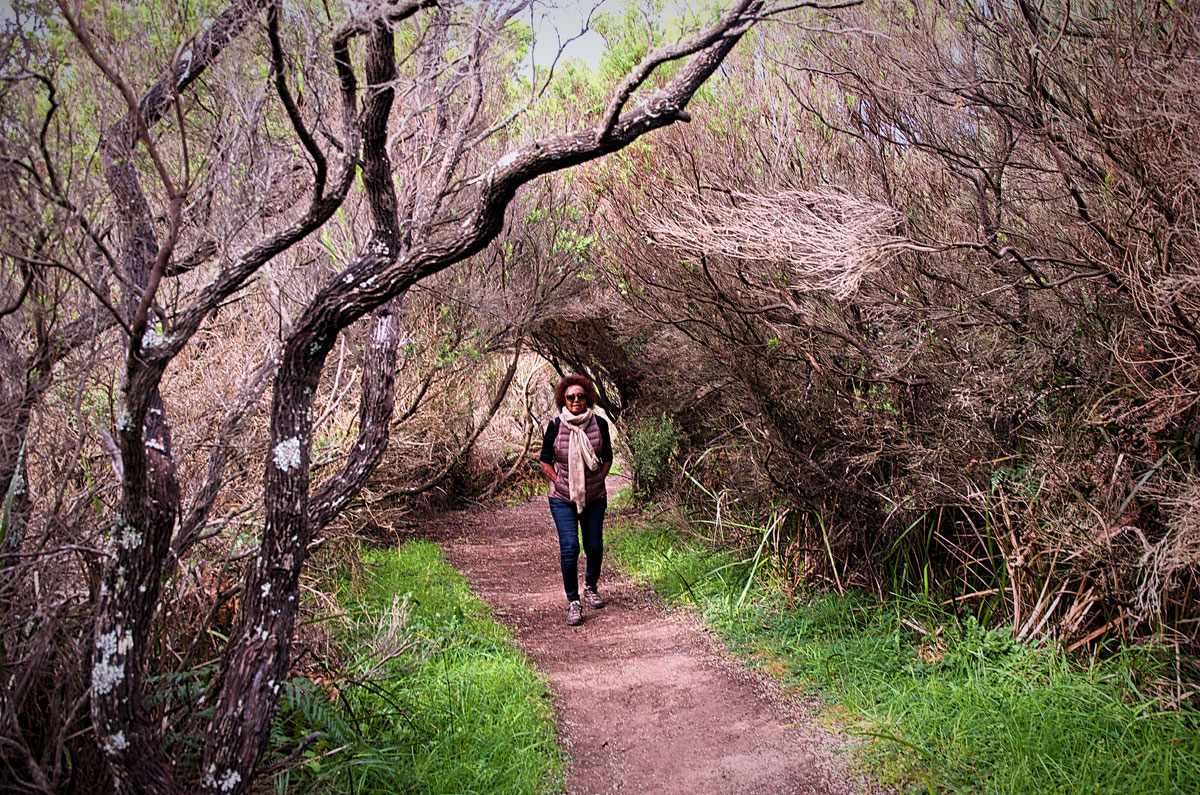 We passed this small, apparently abandoned cemetery. We found out that 13 people were buried here between 1863 and 1901. They were family of the light station keeper, local farmers, and shipwreck victims. 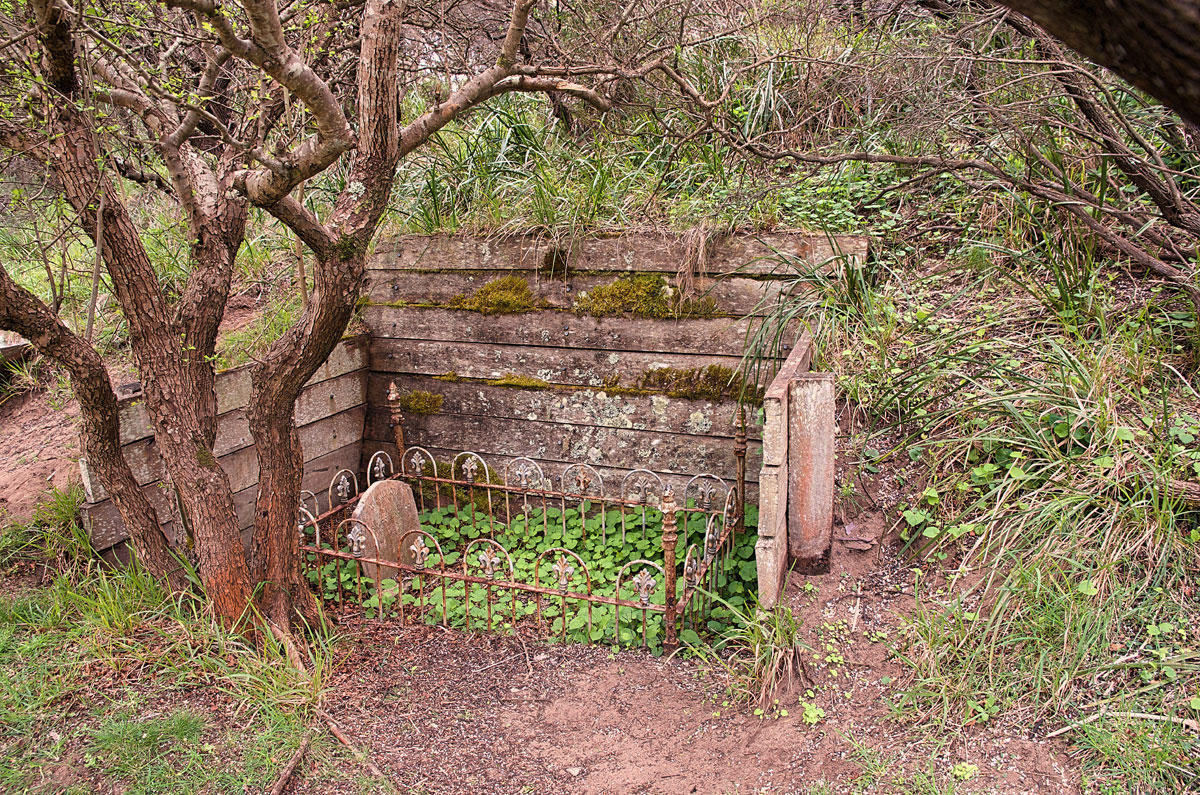 There were several sandy areas we crossed. At one point, we met this man who worked for the Australian government as an economist studying indigenous communities. 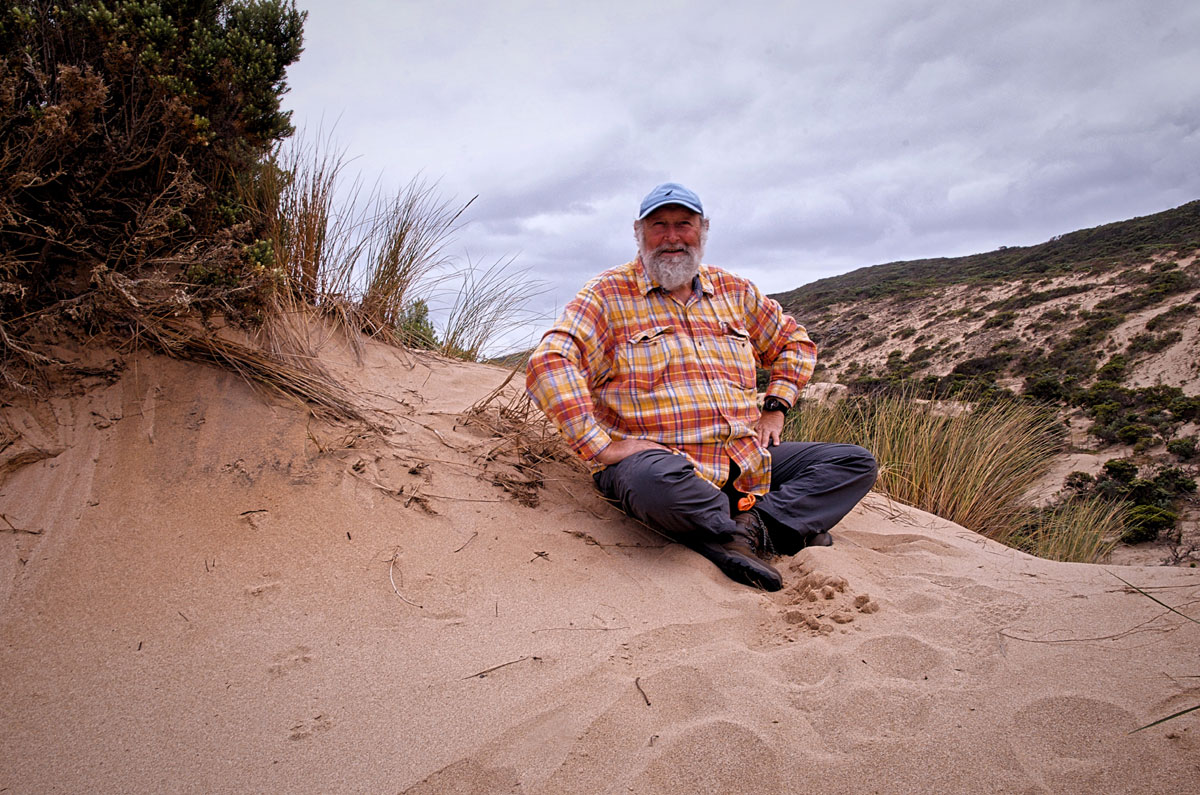 Both days of hiking, we saw only a handful of people on the trail. Maybe the emptiness was partially because it was during the workweek.

Throughout the hike, we frequently had great views of waves rushing onto beaches. 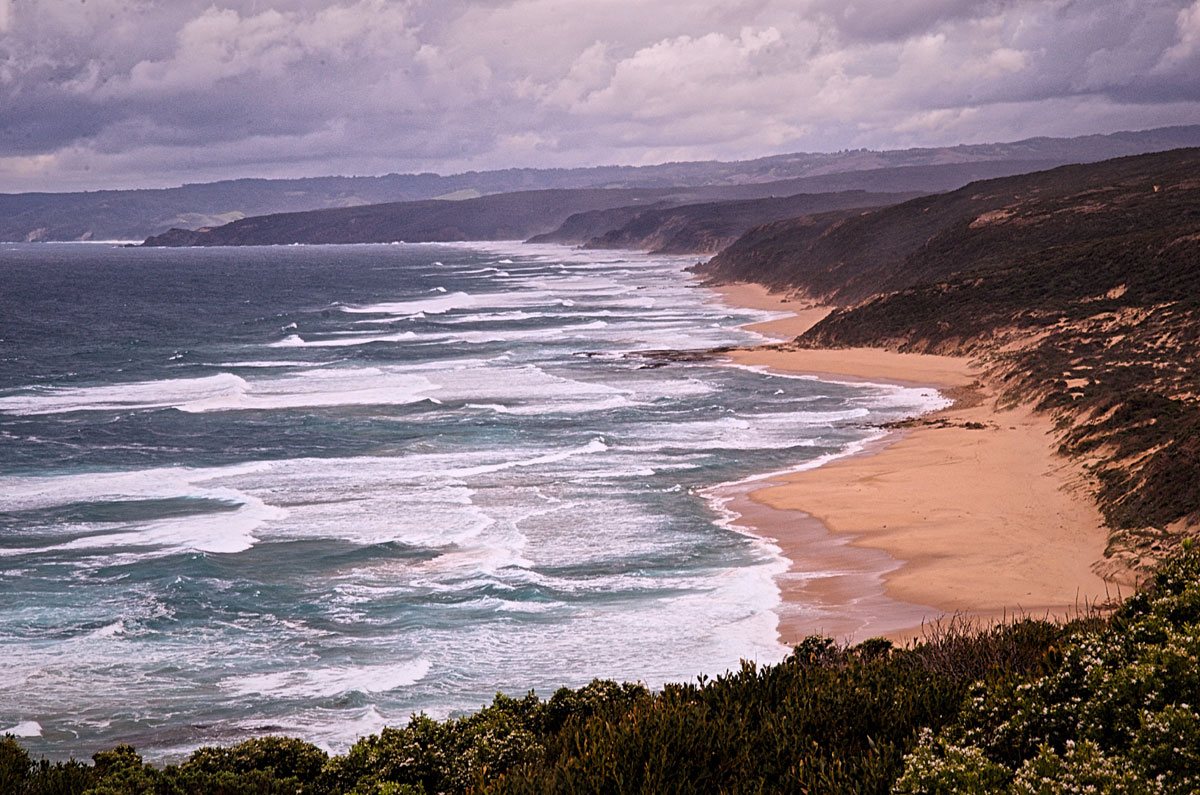 The land by the trail often was striking. This small segment reminded me of a landscaped garden. 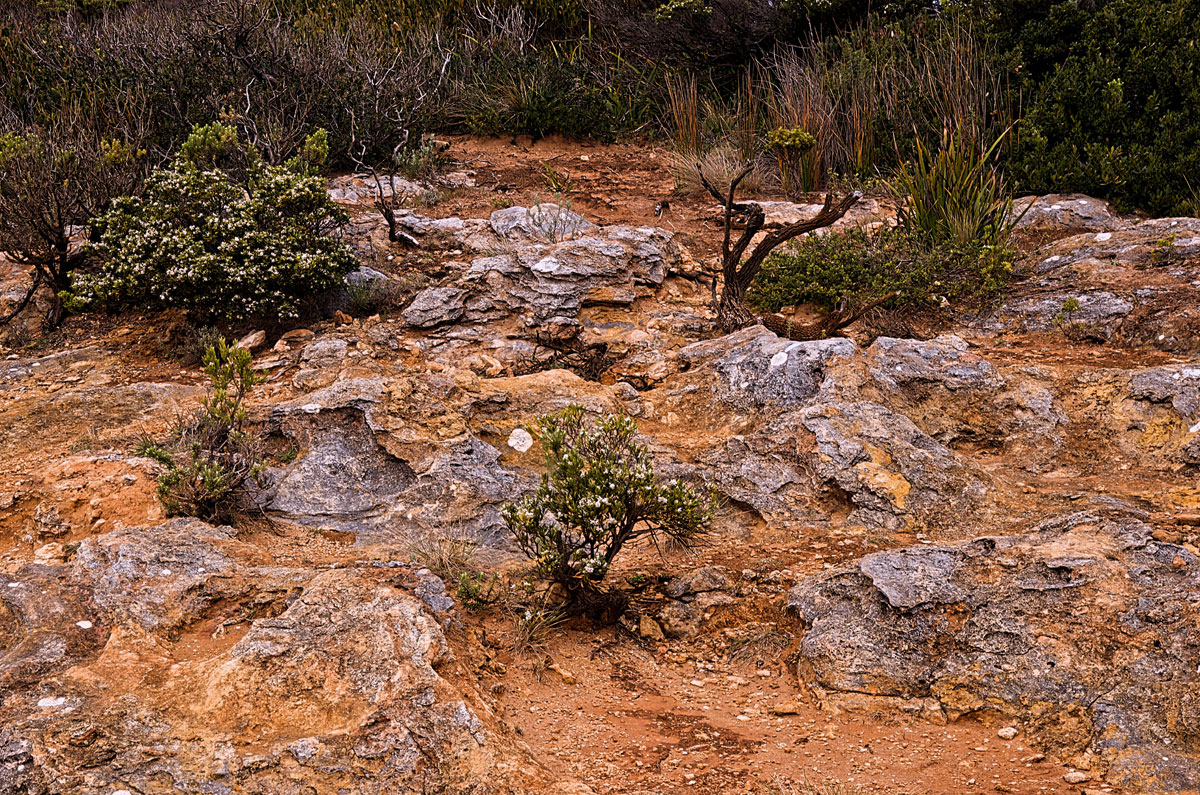 I don’t know if this was completely natural or partially altered, but it was beautiful in any case.

We ended our hike by the wide Aire River. 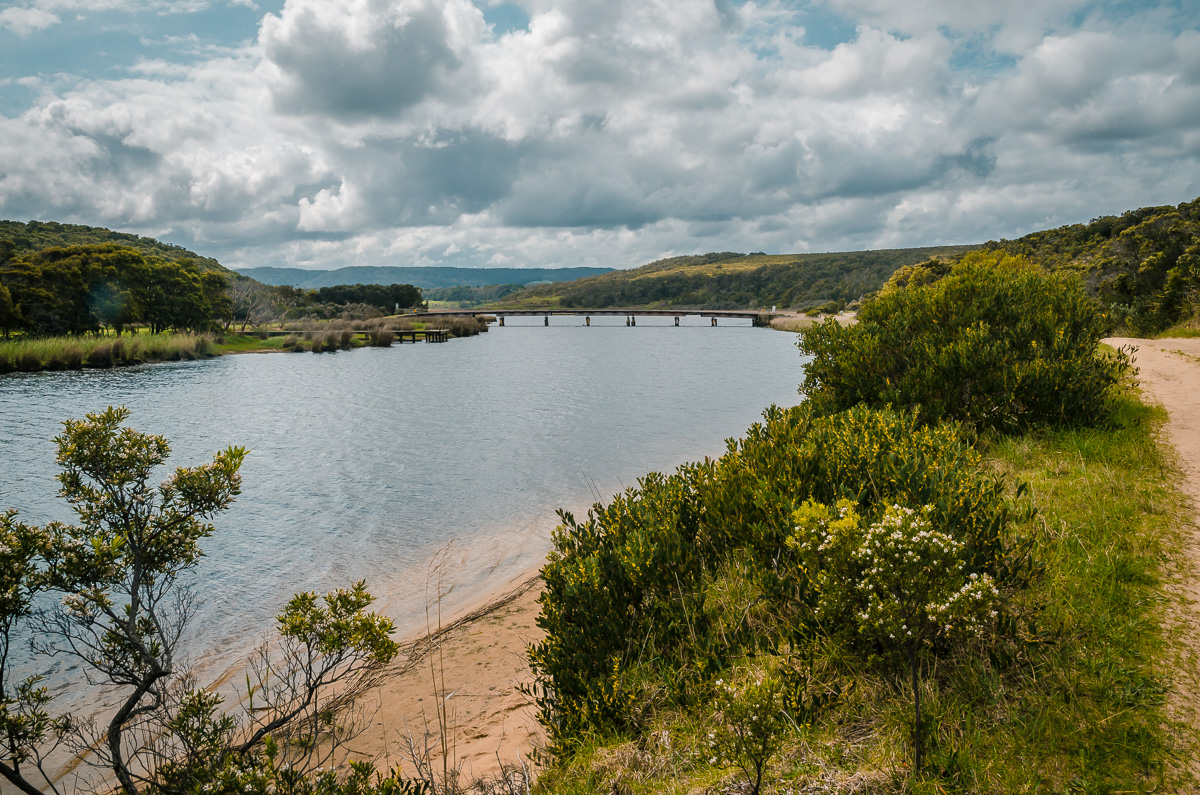 The Wreck Beach can only be visited a few hours each day at low tide. We made it there at the morning low tide and had to descend hundreds of stairs to reach the rocky beach below. It was a remarkable panorama to the west… 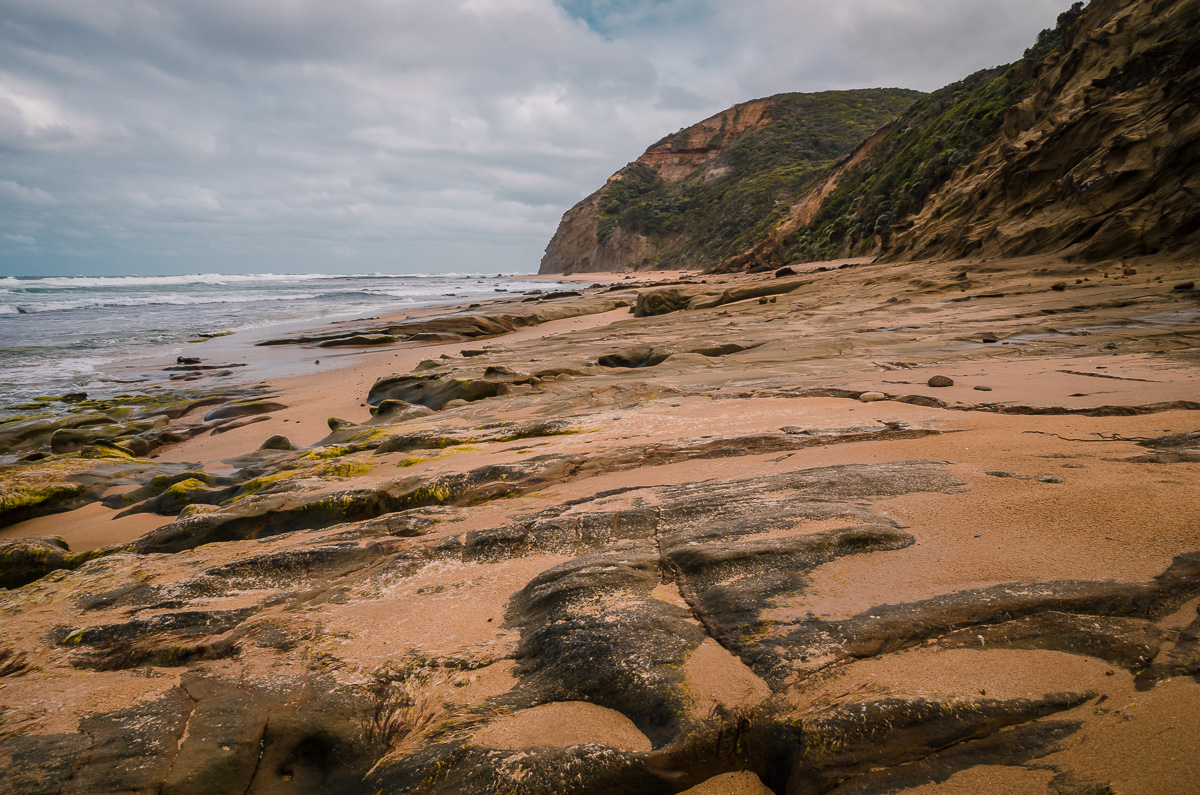 and to the east. 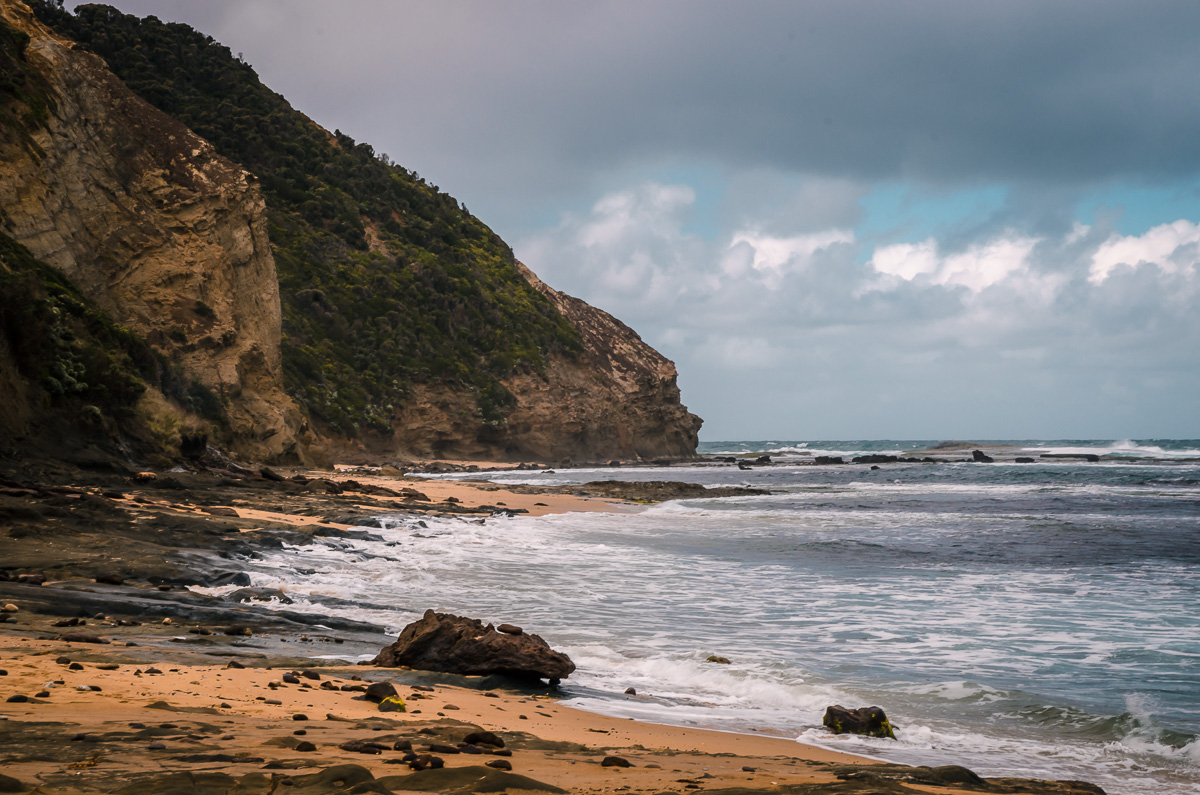 All that’s remaining of the shipwrecks are two anchors from separate incidents. Here is the anchor of the Marie-Gabrielle, a French barge, which sank in 1859. 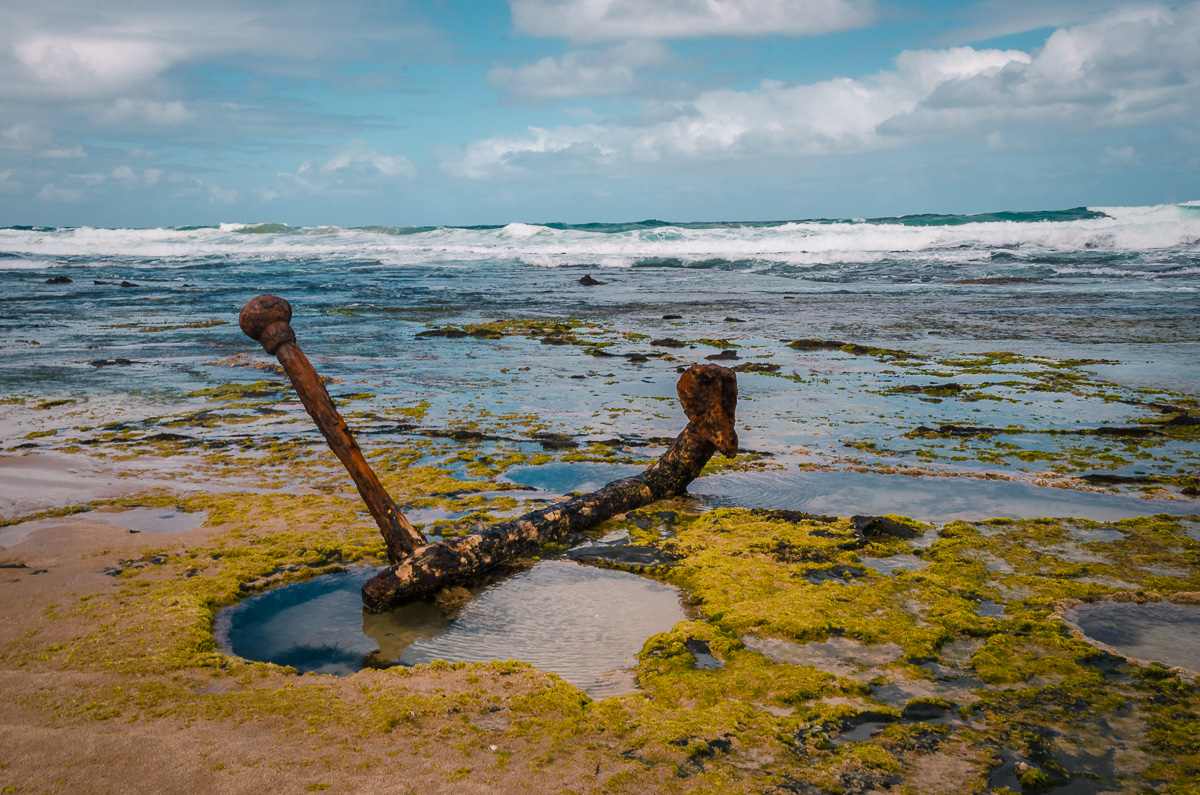 The other anchor, from the 1891 Fiji shipwreck, is another ten-minute walk west.

The Twelve Apostles is the Great Ocean Road’s most well-known destination and attracts hundreds of visitors daily. There is a good reason for the interest, the formations are fascinating. 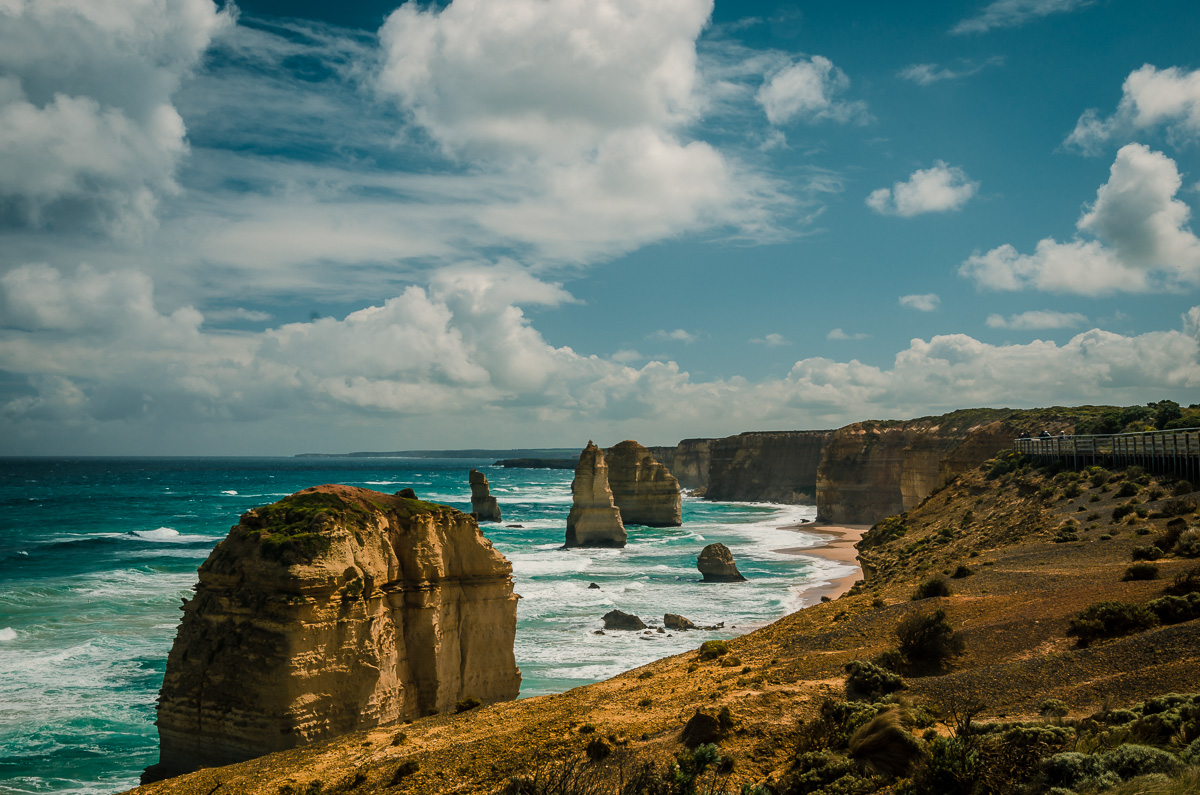 The limestone pillars are all that remains of cliffs after thousands of years of erosion. There is an extensive platform system that can accommodate the busloads of tourists. However, it’s windy! 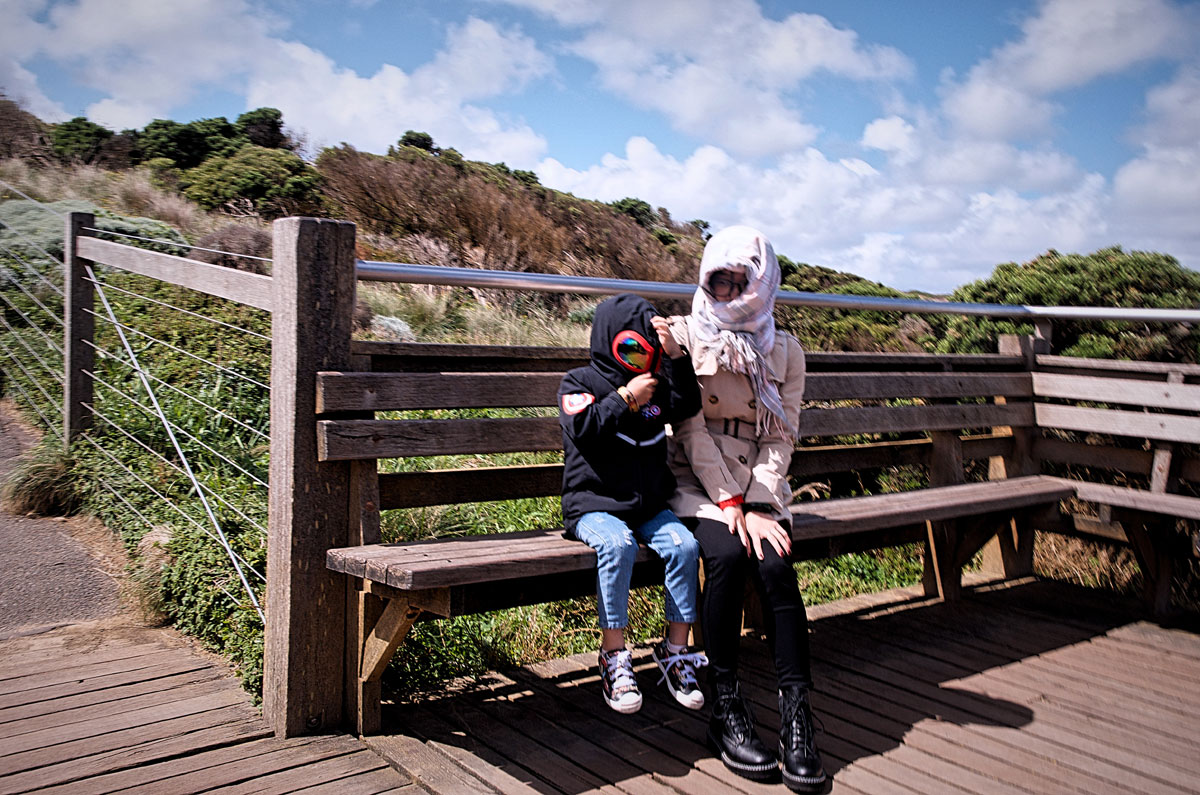 Despite their name, the rocks are not named after the Bible’s 12 apostles but have descriptive names like Island Archway and Bakers Oven Rock. To add to the confusion, there were only eight pillars, but one fell in 2009, and only seven remaining.

Port Campbell is a small town towards the western end of the Great Ocean Road. It has a lowkey charm with its wide main street and small houses. 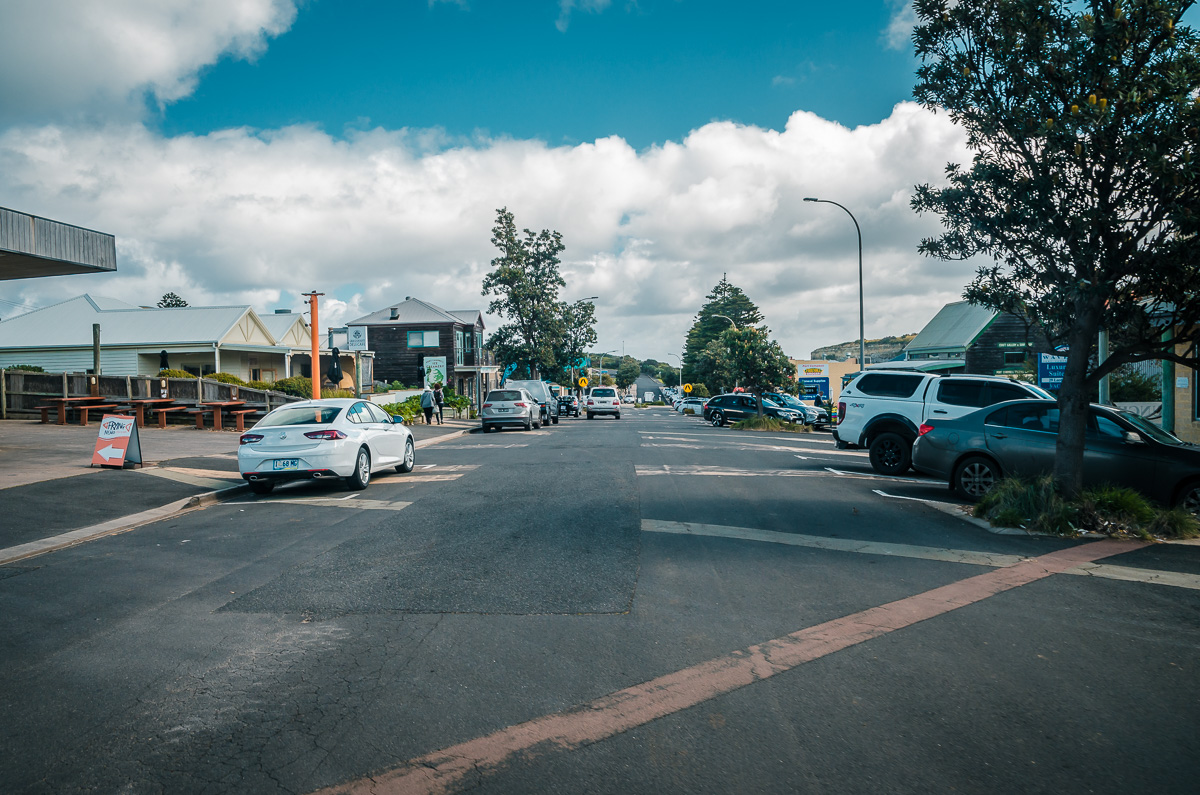 We had lunch there and gassed the car.

One of my favorite memories is the back of a pickup truck with two border collies.

While the coast is scenic, the area is composed mostly of farms and ranches. For herding sheep and cattle, the highly intelligent border collies are extremely competent.