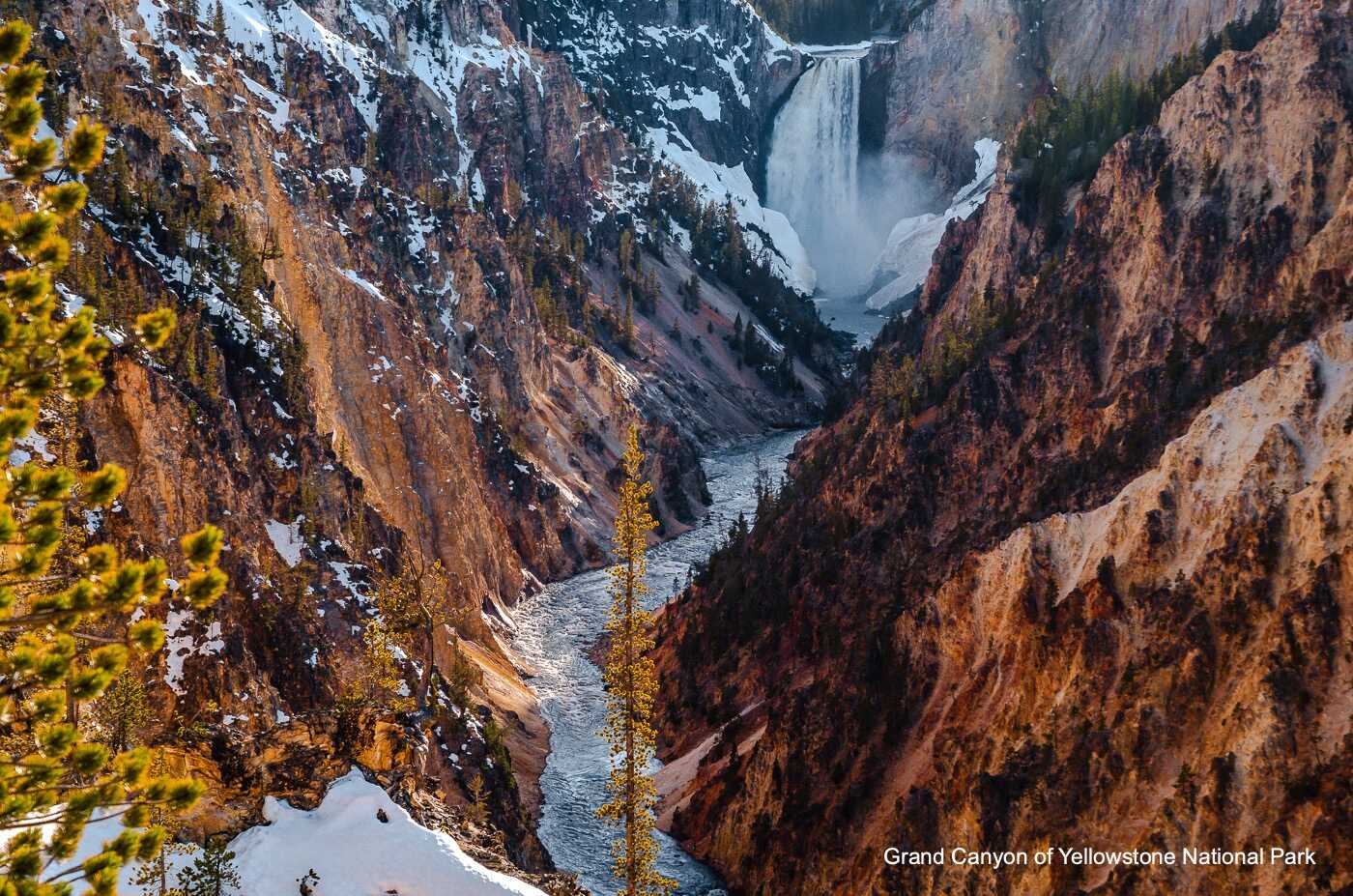 President Grant signed the Yellowstone Act of 1872 into law to preserve 2 million acres of public land as America’s first national park. The land was occupied by Shoshone Indians and other indigenous nations who hunted there for thousands of years. After an 1856 exploration, Jim Bridger spoke about the area’s hot springs, geysers, and intensely colorful lakes and terrain. Over the years, other mountain men told stories of amazing landscapes of spouting water and hot springs. Most believed this was an exaggeration, but it wasn’t.

Once designated as a park, visitors arrived by train, stagecoach, wagon, and horseback to see the marvels. Given our nation’s history, it’s not surprising that Native American tribes were excluded from Yellowstone in the 1870s and 1880s. In 1915, automobiles were allowed and thereafter attendance increased dramatically. Now after 150 years as a park, its scenic beauty, diverse wildlife and geothermal features continue to awe visitors.

As part of a 16-day, 3000-mile Rocky Mountain Road Trip with my friend Mike, we spent two full days in Yellowstone. After college, I explored the park and was impressed back then and I’m still amazed after this visit. It’s no wonder that it’s the country’s most visited national park in the Western U.S., despite its remote location.

For most people, the best time to visit is from mid-May to early October. Campgrounds open between mid-May and mid-June and most close in September. The best time depends on your interests, such as sightseeing, wildlife watching, hiking, back-country camping, bicycling, fishing, boating, bird-watching, cross-country skiing or snowshoeing.
July and August are by far the busiest months with families coming with their children on summer break from school and when it’s not especially cold for camping. We went in early May and over half the park was closed from snow accumulation and only two of the five entrances were open (western and northern). Despite this limitation, we benefited from a relatively limited number of people. 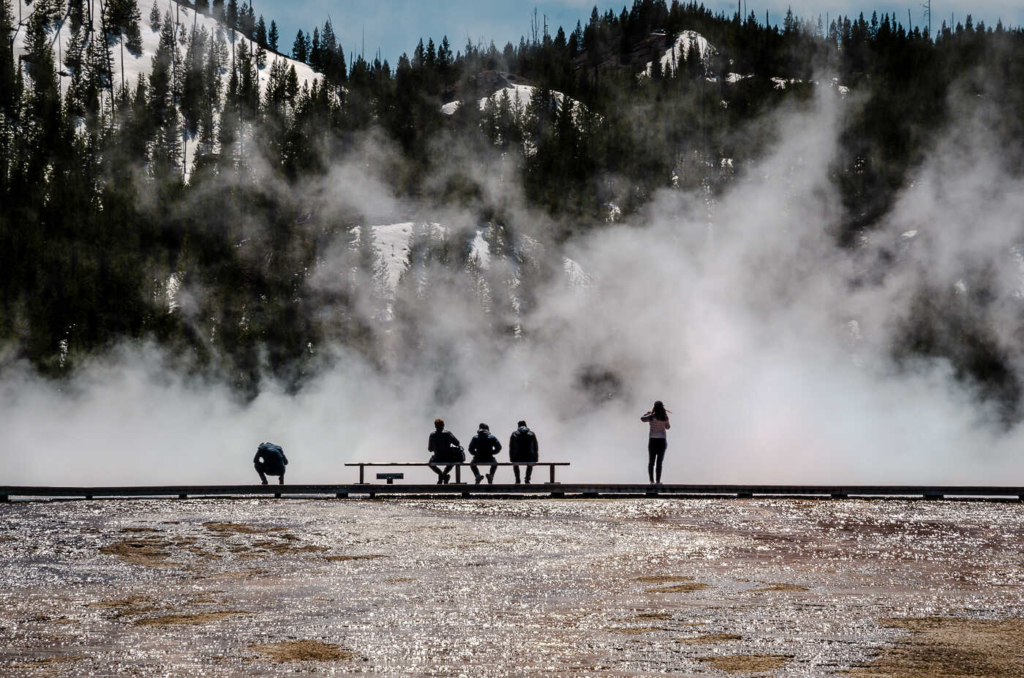 However, if we could’ve arranged it differently, we would have gone in mid-May and camped.

The park is HUGE, covering 3,500 sq mi / 9,000 sq km. That’s bigger than Delaware and about the size of Cyprus. There are many detailed maps online and provided by the visitor centers, but here are the places I highly recommend. 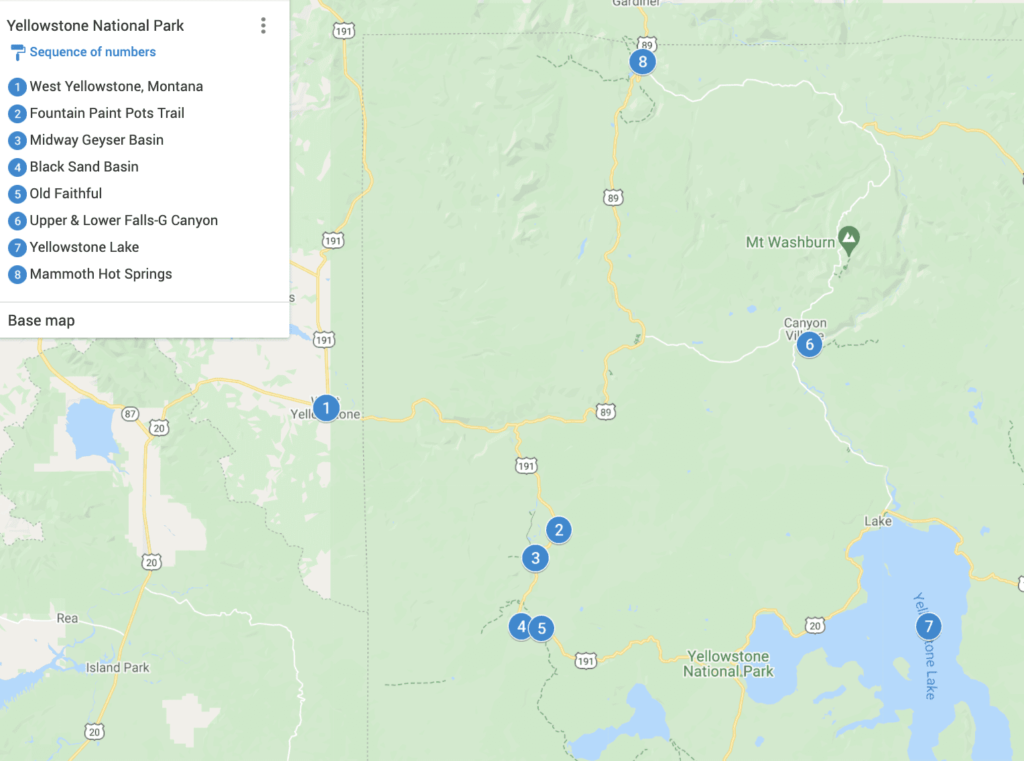 We went to all except Yellowstone Lake which was closed.

The park is mostly in the northwestern corner of Wyoming with strips in Montana and Idaho. As there were no convenient campgrounds open and available, we stayed in a hotel in Island Park, Idaho which is a 30-minute drive to the western entrance by West Yellowstone, Montana. Every day, we would get our first meal at Ernie’s in West Yellowstone. Matt, who immigrated from Lyon, France to live in this beautiful environment, owns and manages this restaurant / deli / bakery with cappuccinos and croissants. 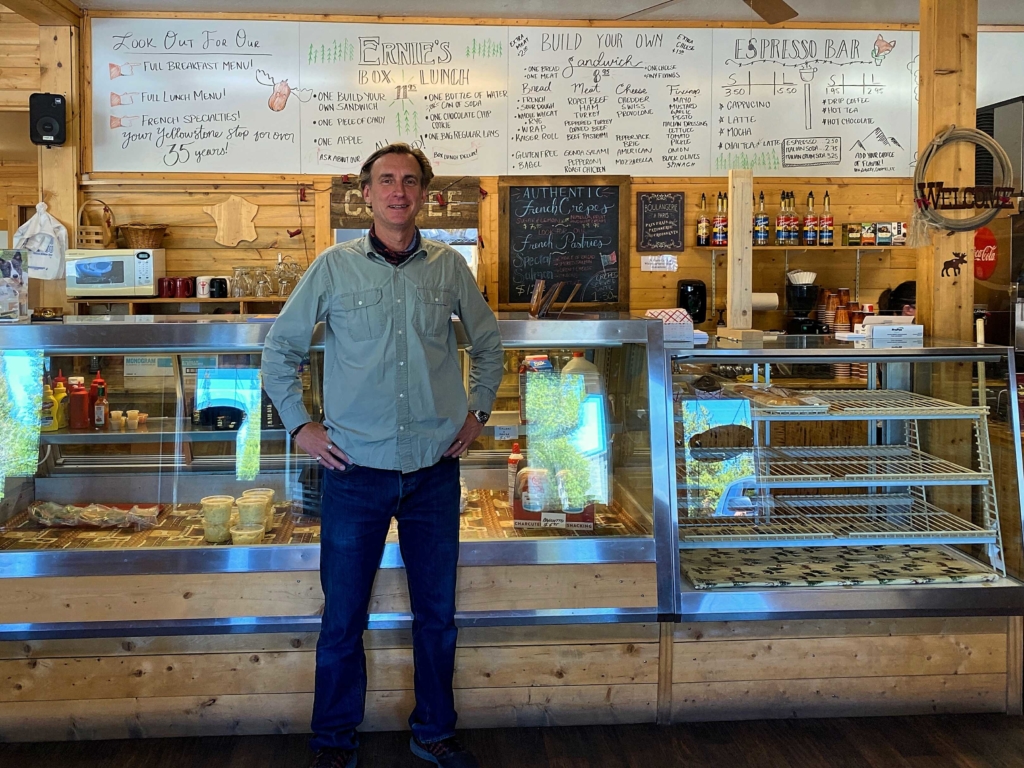 Let’s start off with the most well-known geyser in the country and arguably in the world. Since records have been kept, it erupts about once an hour. The Park Service predicts eruptions within  +/- 10 minutes and they were right when we were there. There are no trees around it anymore, so it spouts from a rock mound.

The interesting thing to me was how high it went (surely over 100 feet) and how long it continued (about five minutes). There are benches where people can sit and be impressed by this natural phenomena of regularity.

Something unexpected that caught my eye was the interesting design by Cushing Terrell of the Old Faithful Visitor Education Center. 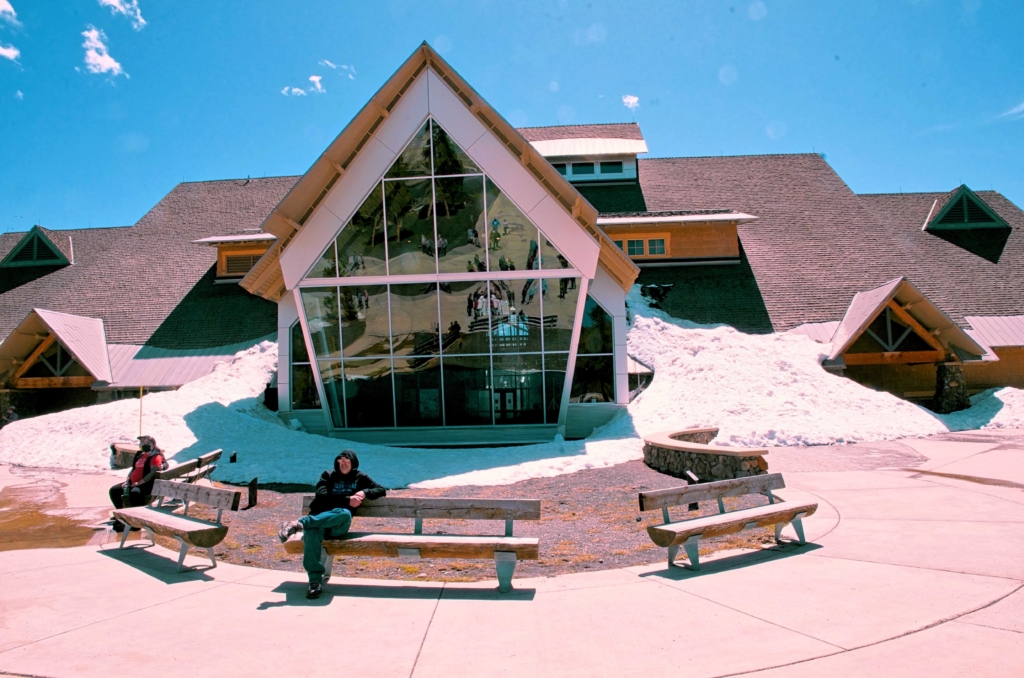 The style is Arts and Crafts mixed with Adirondack Camp, which coordinates with the Old Faithful Inn design.

Some places were closed when we were there, but we spent over two hours checking out the ones that were open. The following images are just a few of the fantastic sites.

Black Sand Basin is the place to see cliff geysers. 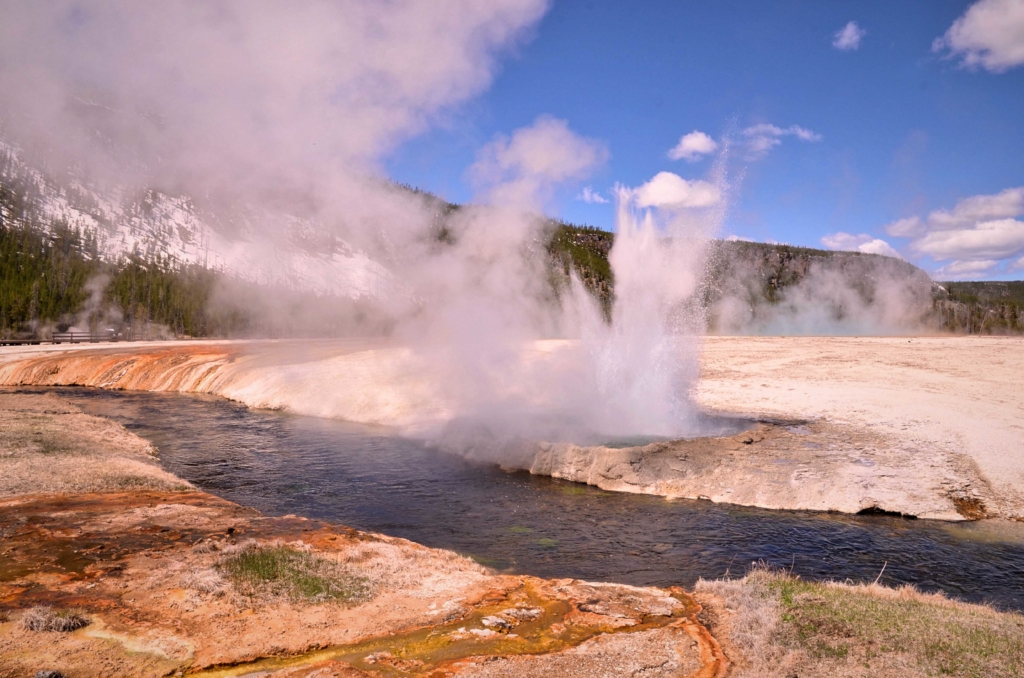 The Emerald Pool is not only stunning but also hot with a temperature exceeding 150°F / 65°C. 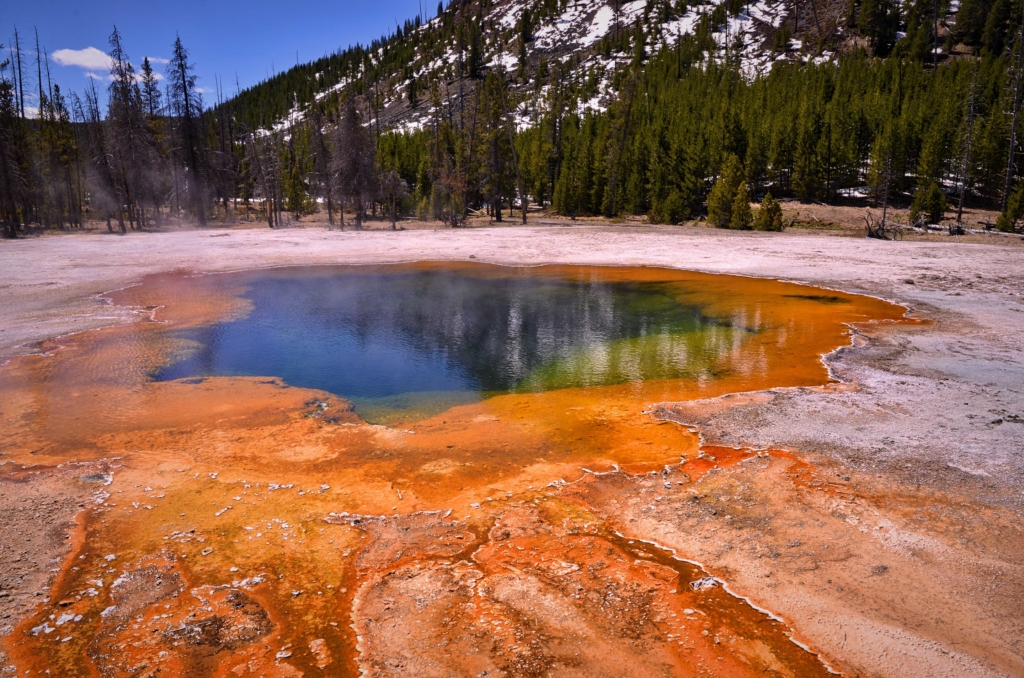 At some of the steaming springs, Mike and I delved into some dark humor.

Grand Prismatic Spring is the largest hot spring in Yellowstone and in the world, except for two in New Zealand. It’s hard to see the spring’s outline because of the ubiquitous steam. This is a can’t-miss feature. 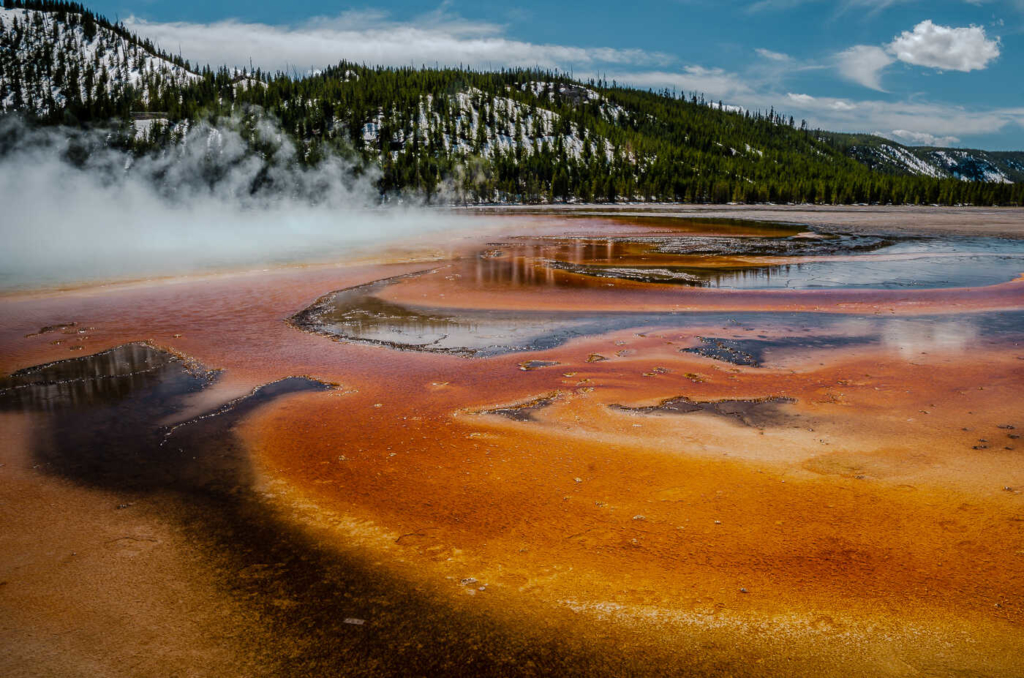 Excelsior Geyser was once the biggest in the world with eruptions over 300 ft / 90 m, but that was back in the 1880s. To everyone’s surprise it erupted for two days in 1985 with some spouts up to 80 ft / 25 m. When we were there, the crater was covered with steam all the time, but there was a moment when I could see the side. 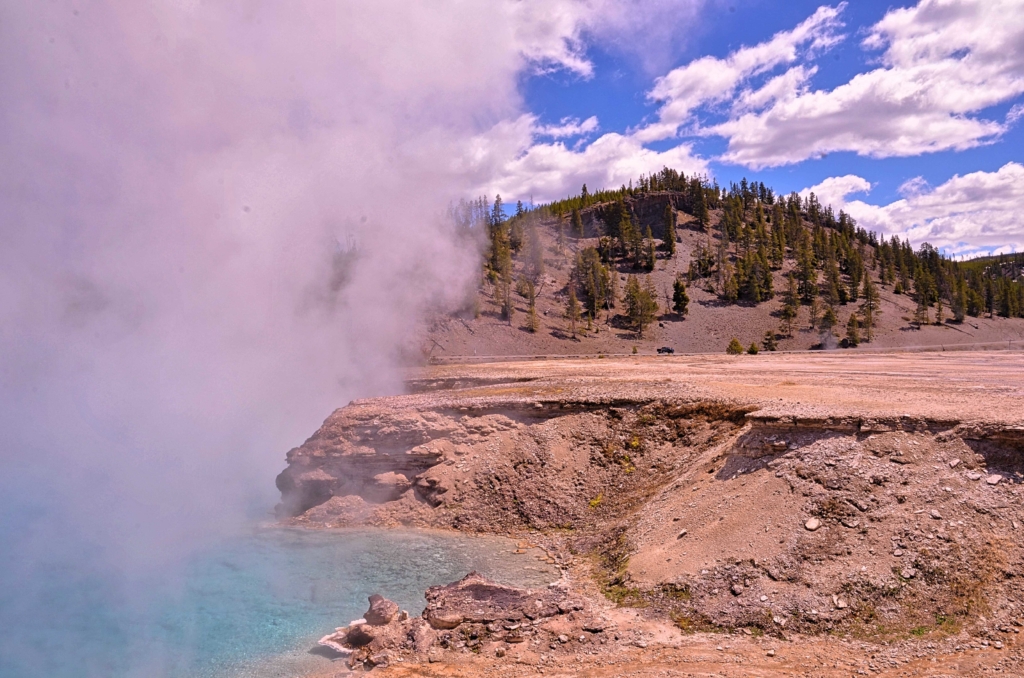 A favorite place of mine is where small, hot water streams run into the Firehole River. 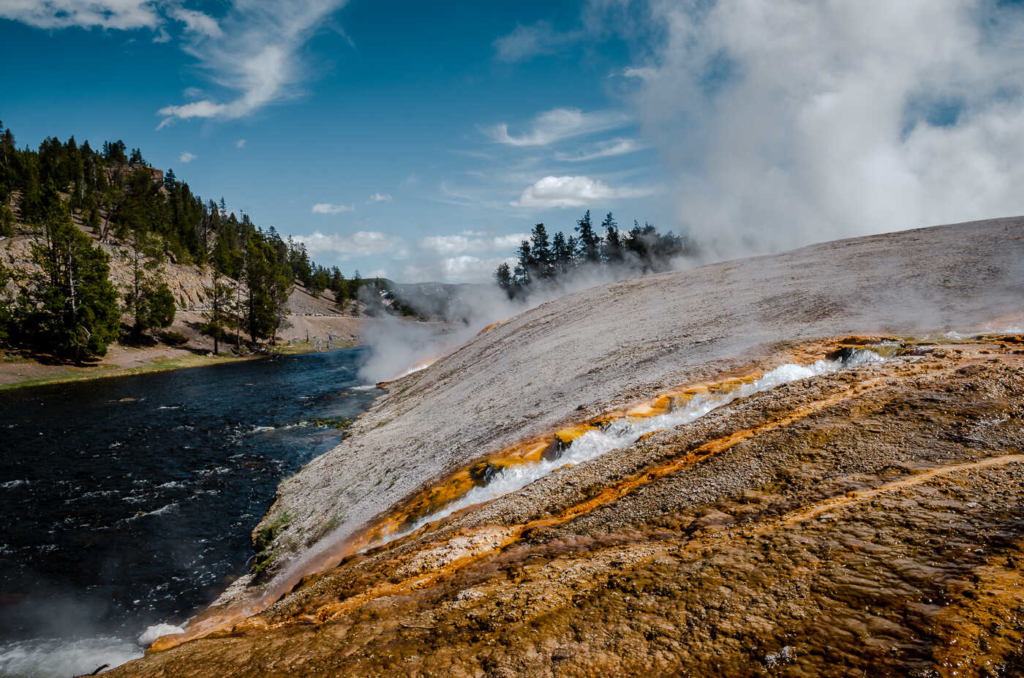 This is another walkthrough by interesting geysers, fumaroles (holes constantly emitting steam) and hot springs.

Most of the Fountain Paint Pots area consists of pinkish and greyish stone with a high percentage of silica.

The mud holes are reddish-brown pits with escaping carbon dioxide and hydrogen sulfide gases that cause bubbling in the spring and early summer.

Dead lodgepole pine trees have survived despite being drowned when nearby hot springs shifted. They are still standing because silica penetrated the trees and hardened their bases. 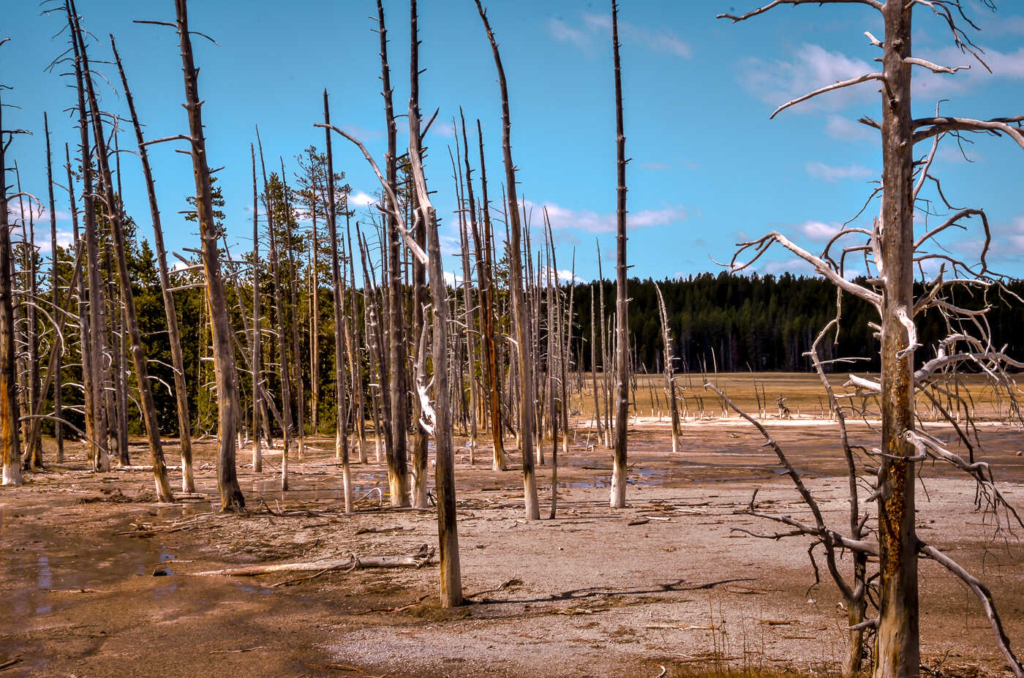 After a 45-minute drive from Old Faithful, we arrived at the 20-mile Yellowstone Grand Canyon with the rushing Yellowstone River. 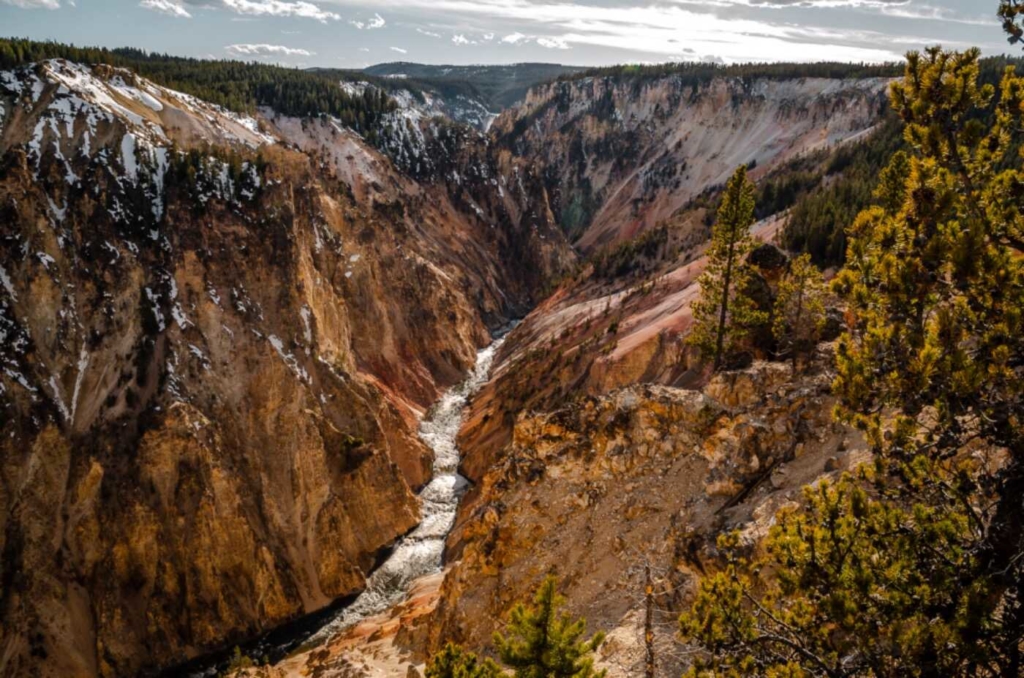 There are many miles of trails and roads connecting overlooks where you can’t help but take dramatic pictures.

The highlight is the approximately 300 ft / 90 m Lower Falls 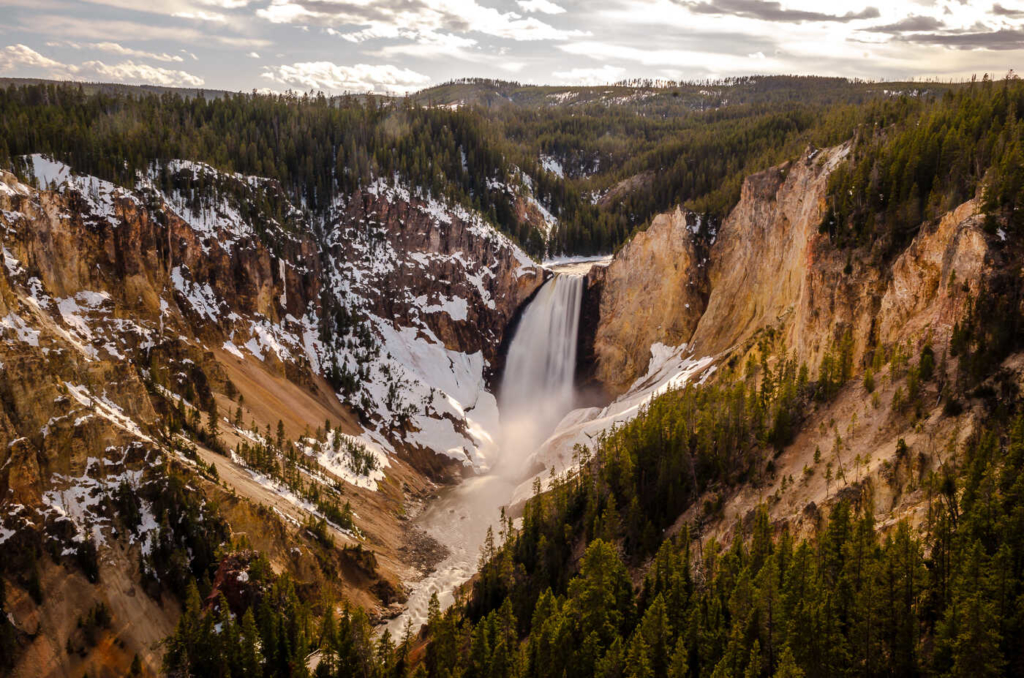 I took advantage of a well-placed overlook to set up my tripod and fire away. 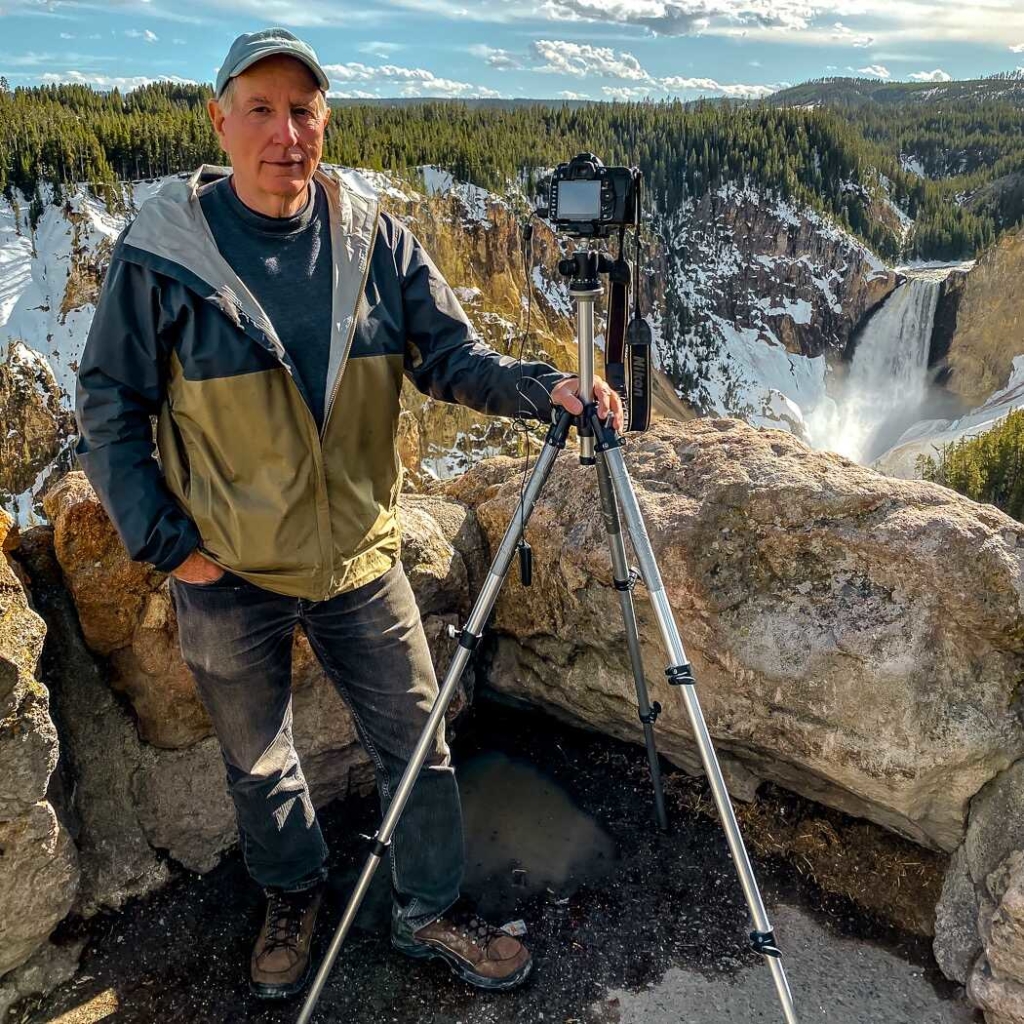 Upper Falls is 1/3 the height of Lower Falls but equally powerful. I got there when the sun was low in the sky and it was in the shadows. 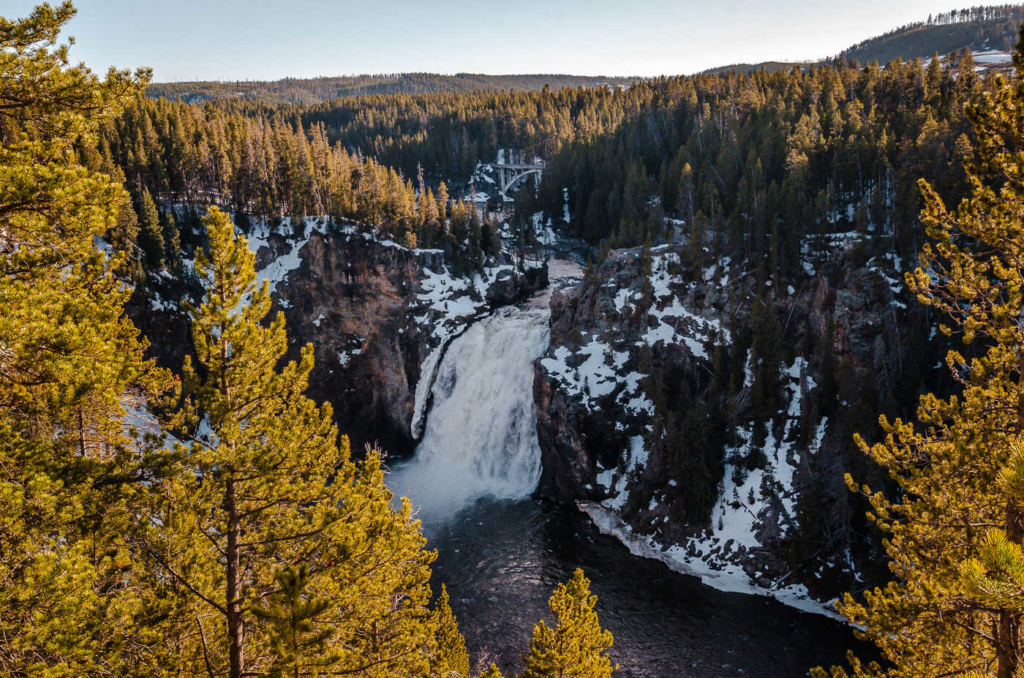 The backcountry of Yellowstone has many spectacular waterfalls, rivers and good spots for fly fishing. They are not easily accessible from the road and frequently seen.

The next day, we checked out of the hotel, had a bite at Ernie’s and reentered the park from the West Entrance. We followed the road with beautiful scenery of mountains and cliffs by the Madison River. 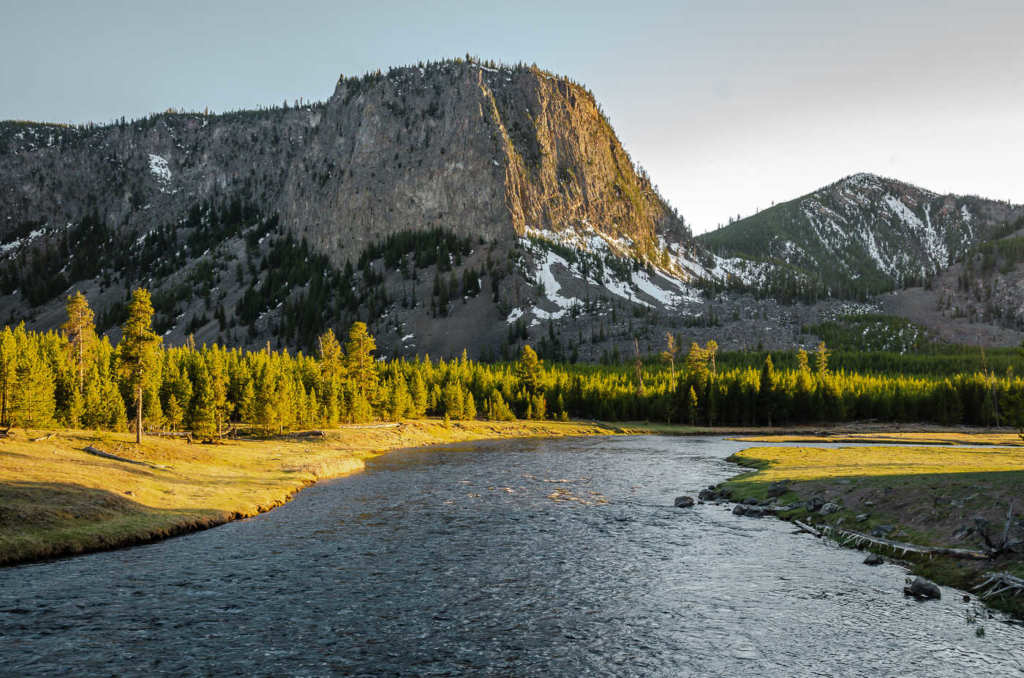 A few times we saw a group of photographers with massive telephoto lenses. 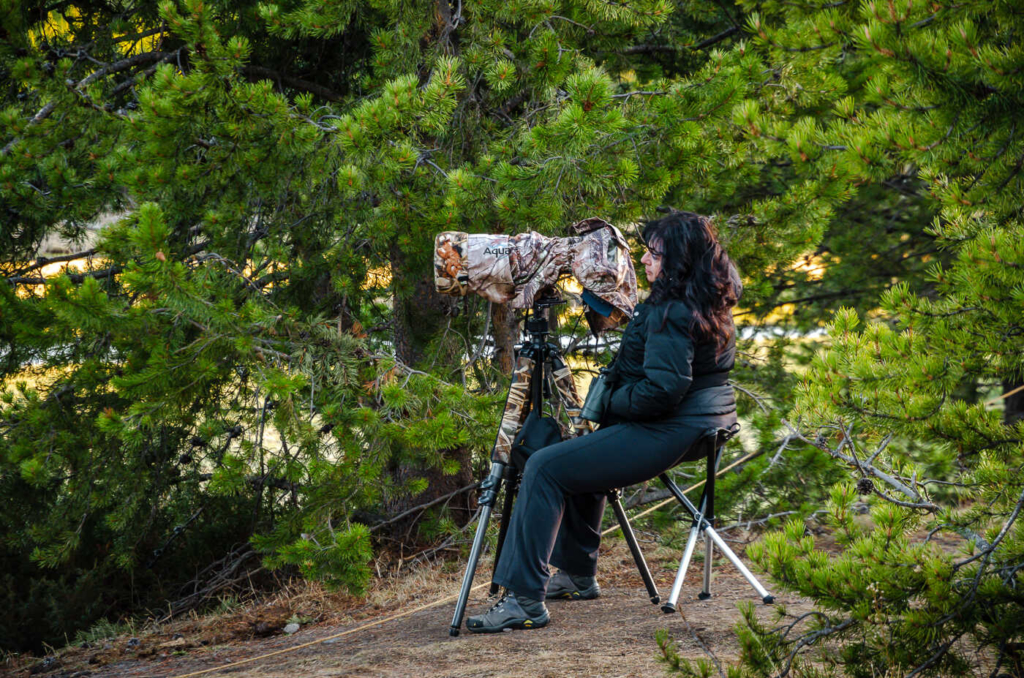 After chatting with a few, we learned that a buffalo had just died and a series of animals had been coming to feast on the carcass. About 15-minutes earlier, there was a pack of wolves there.

Yellowstone is blessed with staggering geothermal attractions including the remarkable Mammoth Hot Springs. Spending over an hour on the 1.75 mi / 2.8 km of boardwalks, we saw hot water flowing over radiant terraces. Here’s the renowned Mound Spring: 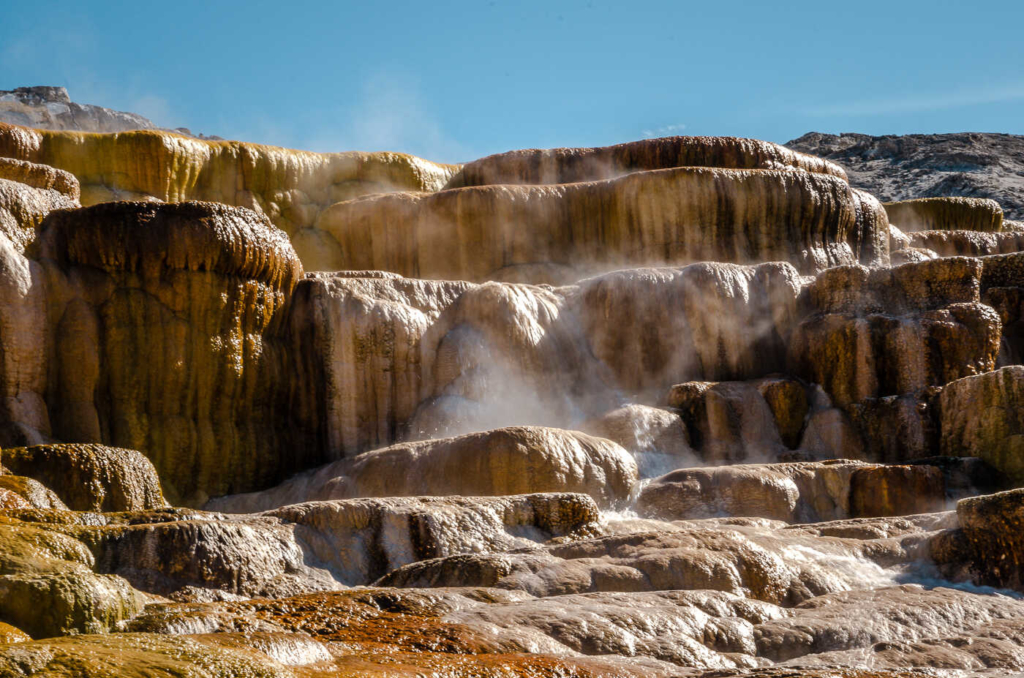 Another striking one is Minerva Terrace. 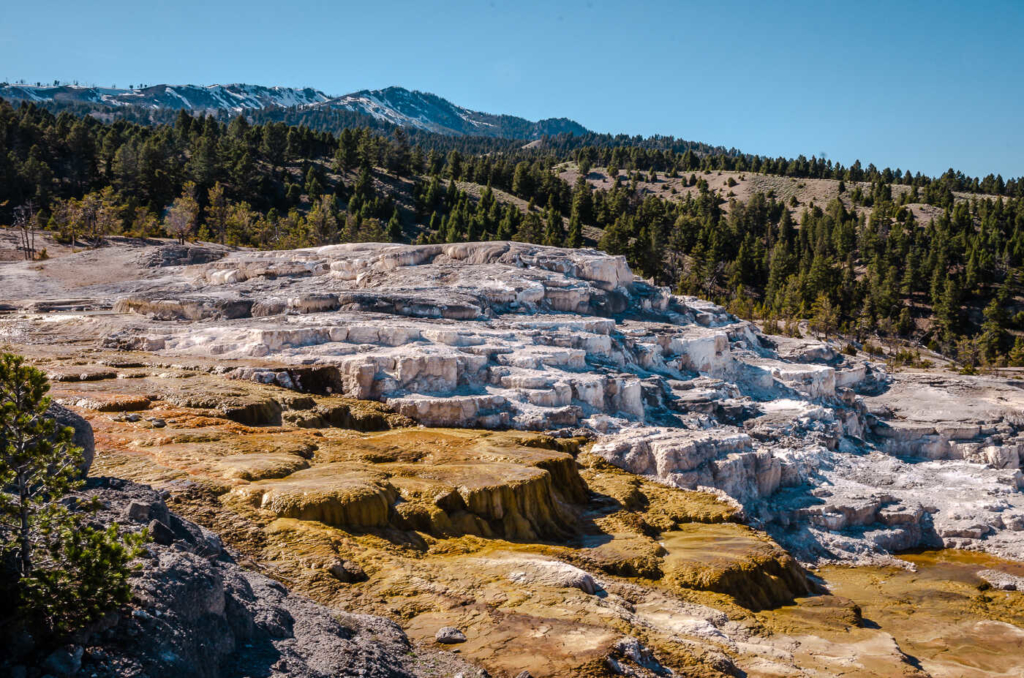 No matter where we wandered, we found a panoply of colors from the dissolving and hardened elements. 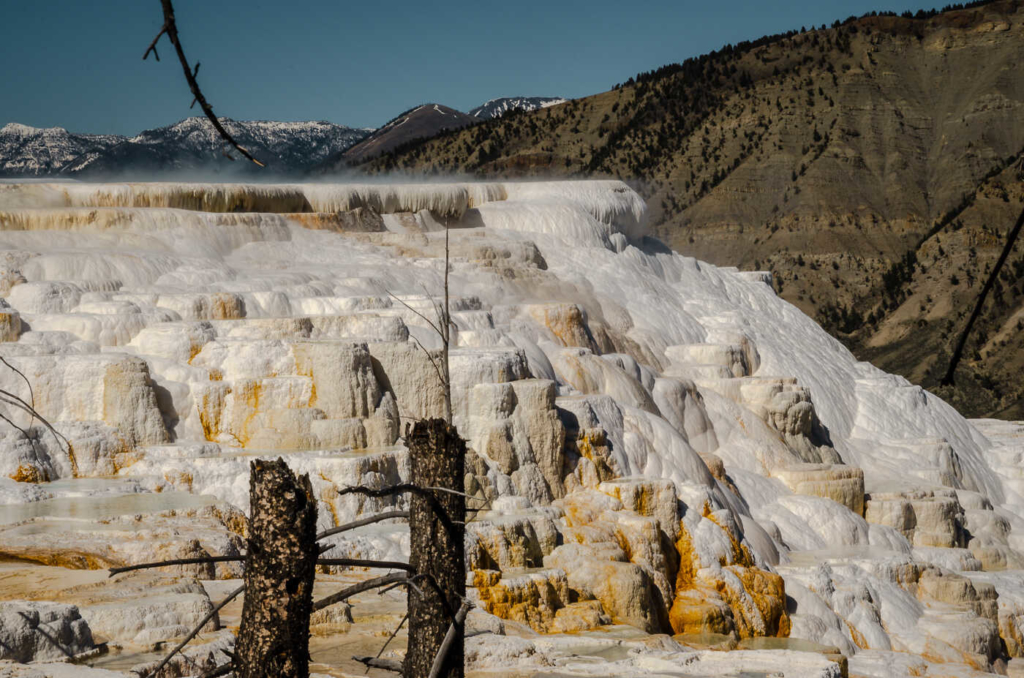 For many, the highlight of the park is the wildlife. While we were there, we saw elk, a fox and a variety of bird species, which is a minimum of what to expect. However, compared to when I last visited, the most amazing thing was the proliferation of buffaloes. They strolled everywhere and were clearly the kings and queens of the road.

While driving by the Albright Visitor Education Center at the North Entrance, we saw this calf grazing on the grass. 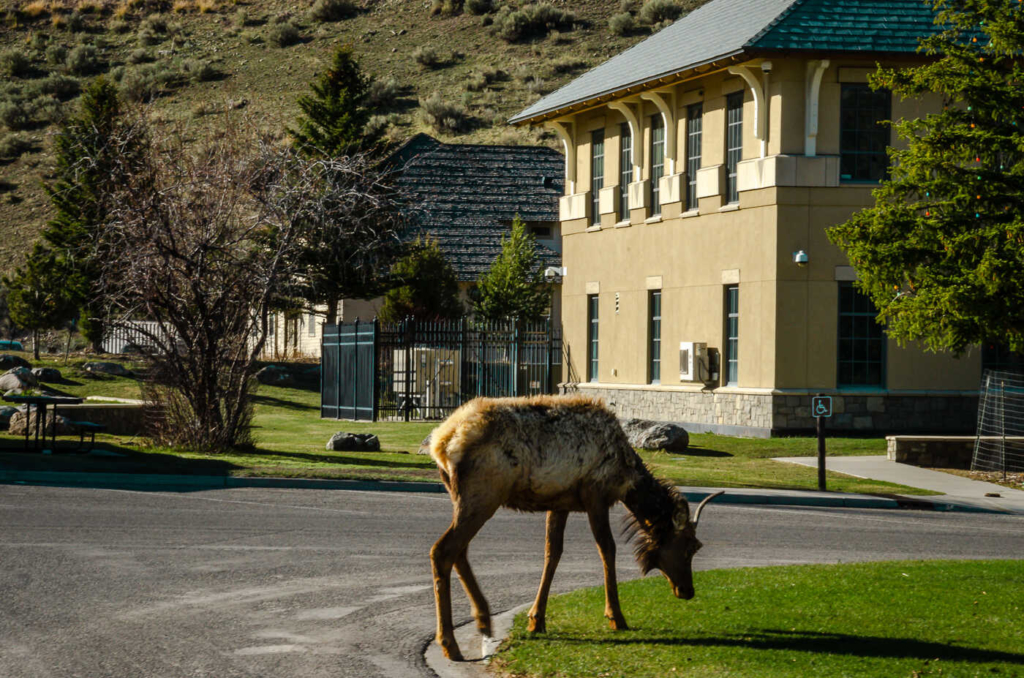 By the visitor center, there are large, solid and attractive residences built by the US Army when they administered Yellowstone in the 1890s and 1900s. 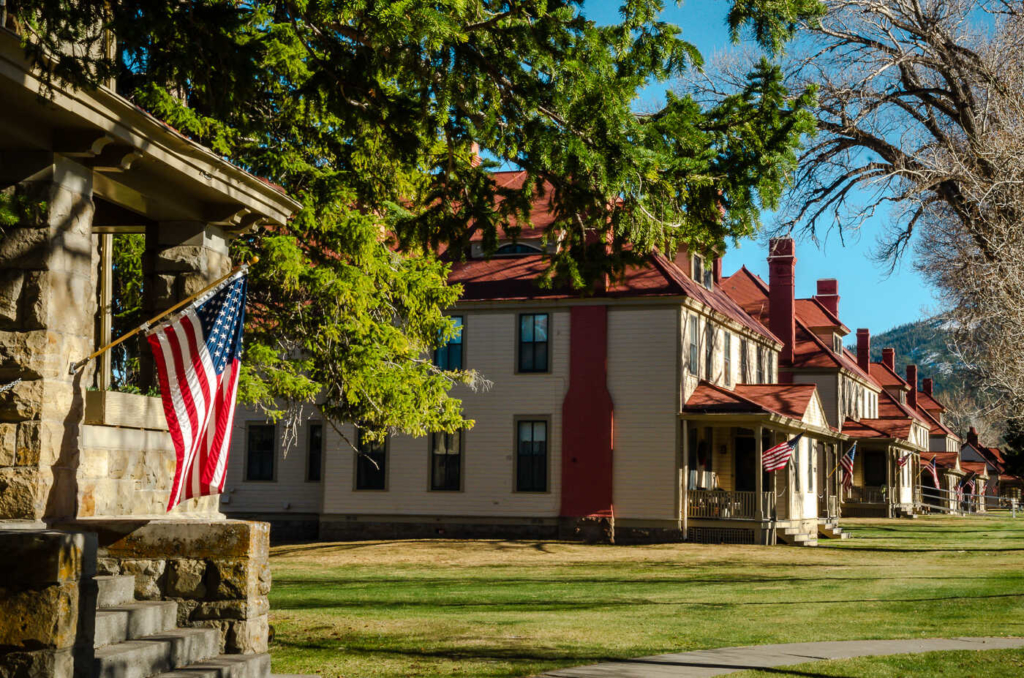 This was the end of our time in Yellowstone. Even after seeing tremendous natural wonders and amazing wildlife, we still barely scratched the surface of all this park has to offer.

It doesn’t seem fair that one park can have so much – from deep, colorful canyons to hundreds of geysers and hot springs to a huge number of animals large and small. There’s hardly a visitor who is not impressed. It’s no wonder it was designated the country’s first national park!