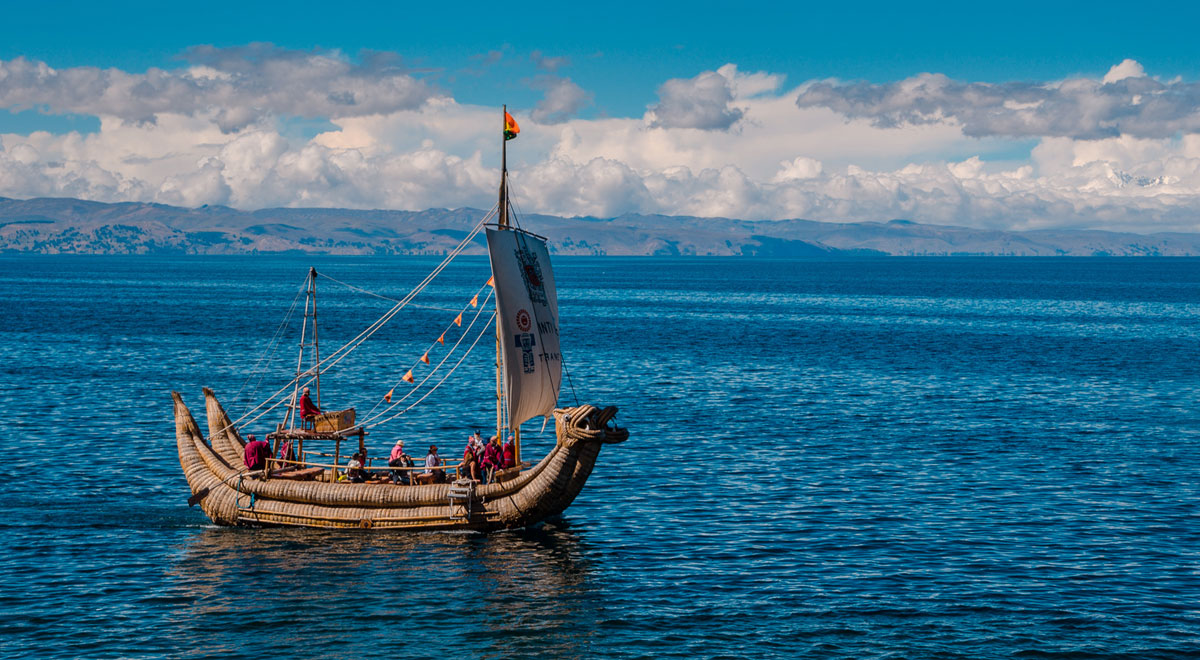 We arrived at Lake Titicaca on the Altiplano. According to Inca lore, this is the place where the Sun and Moon were born.

We were amazed by the animal representations on traditional reed boats. 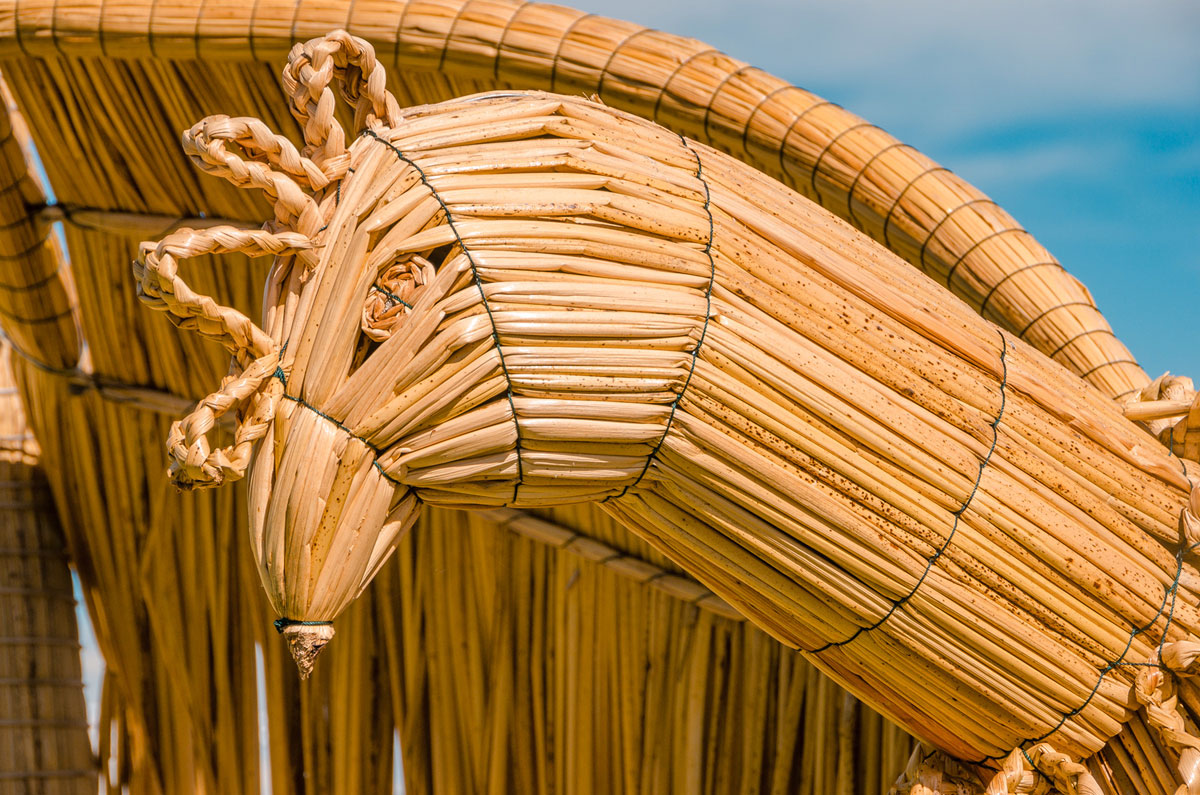 The animal images repeated themselves everywhere we went.

Coincidental? Maybe. Then we saw the Tellytubby building. 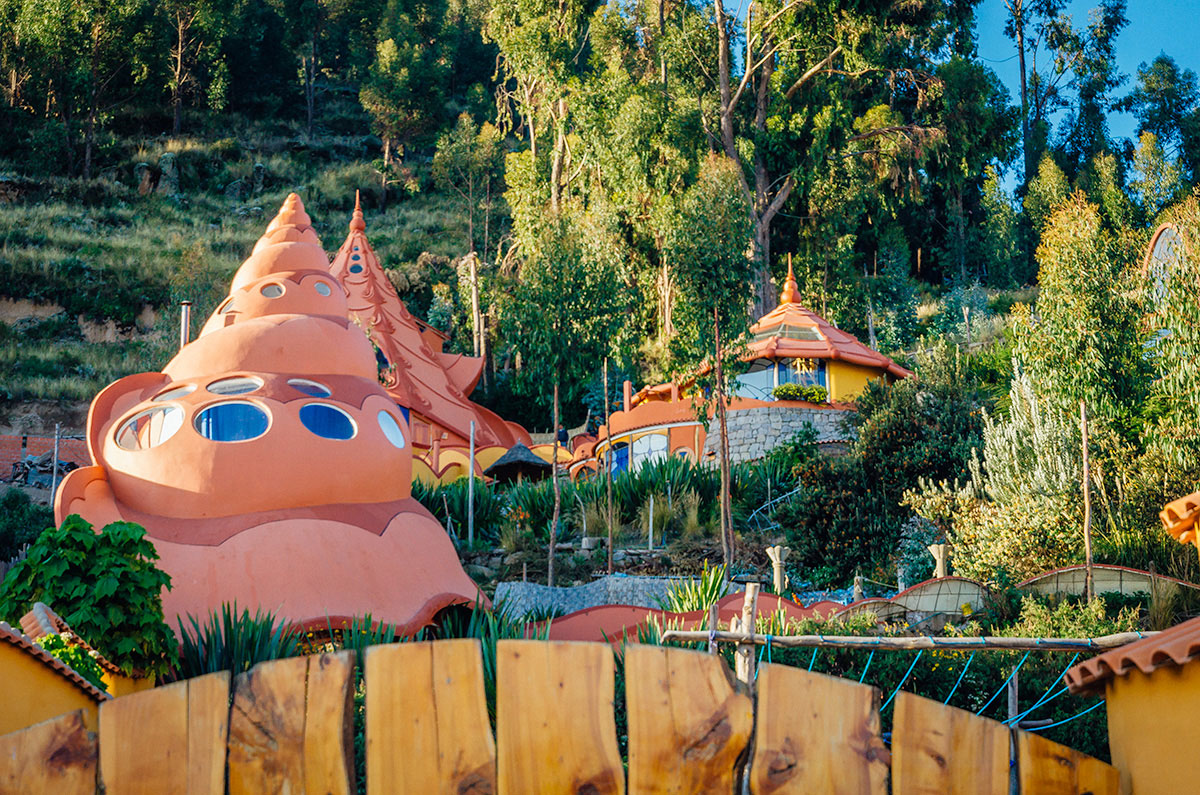 We were reminded we were traveling through the Andes where we understood very little of the fascinating cultures.

Khadija, my wife, our friend Steve and I were on the way to hike the Inca Trail to Machu Piccu in Peru at the end of April 2018. We had spent time in La Paz (Bolivia Part 1) and Sucre, Potosi & Salar de Uyuni (Bolivia Part 2) acclimating to the high elevation. The next step of our journey was Lake Titicaca. First in Copacabana which is on the Bolivian side. Then in Puno on the Peru side.

Lake Titicaca is the largest lake in South America (some say Lake Maracaibo in Venezuela is the largest but it is a tidal bay and not actually a lake). It is 120 miles (190 km) long and 50 miles (80 km) wide and covers over 3,200 square miles (8,300 square km). Titicaca is also the highest commercially navigable lake in the world. The lake is 3,800 meters (or 12,500 feet) above sea level though with climate change, the water levels have been dropping since the turn of the century. After the War of the Pacific against Chile (1979 to 1883), Bolivia lost access to the Pacific Ocean and this is its only ocean-like coast.

The lake is credited by Inca legends to be the birthplace of their civilization. Many of the inhabitants on the lake are Quechua-speaking descendants, some of whom dress traditionally. They believe that it has the shape of a puma hunting a rabbit. A creditable linguistic theory is the name derives from the word “Titi Khar’ka” which in the Aymara language means “Rock of the Puma.”

We left around 8am from central La Paz. Our bus took about five hours to get to Copacabana, with one rest stop. The ride itself was interesting. After climbing out of the La Paz Valley, we drove through El Alto where there is continual construction of pinkish brick and stone buildings. 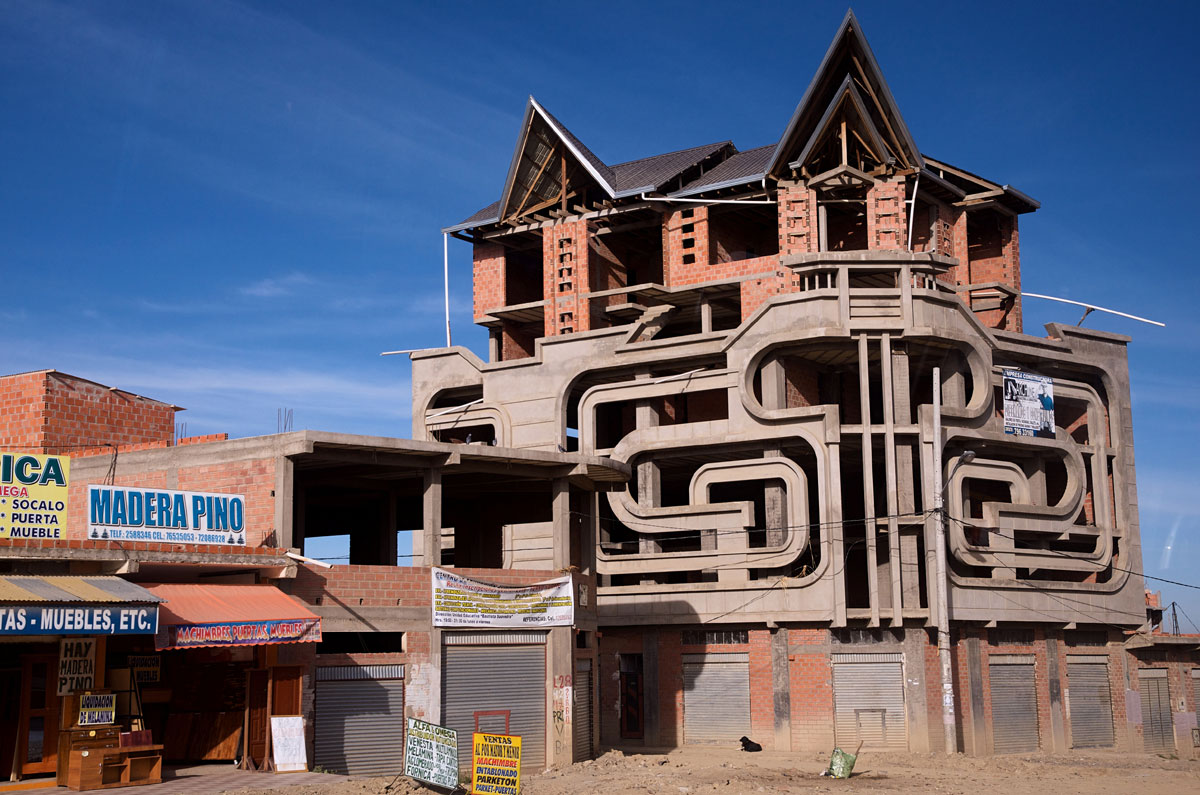 El Alto, once just a satellite city to La Paz, now has a greater population with mostly indigenous people. While navigating the rush hour traffic, we were able to observe the street life. 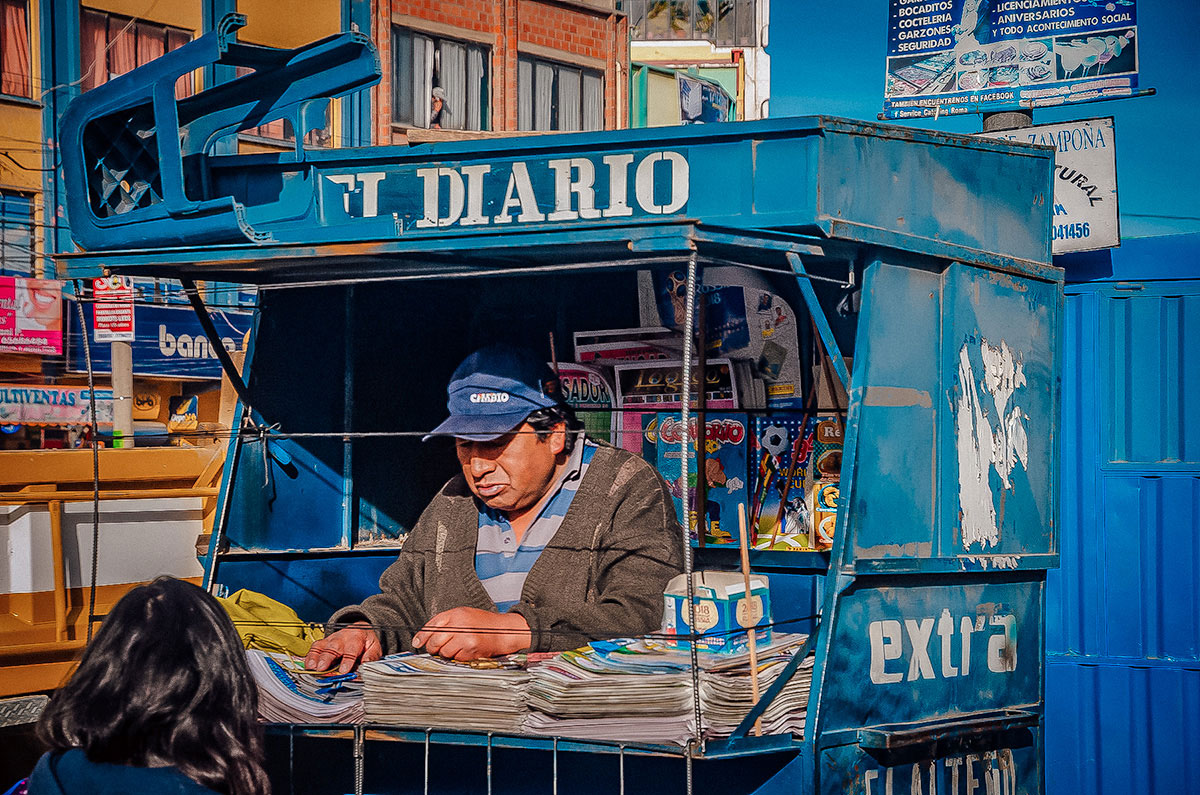 On our way to Batalias, we were in the countryside and could see the Andes in the distance. 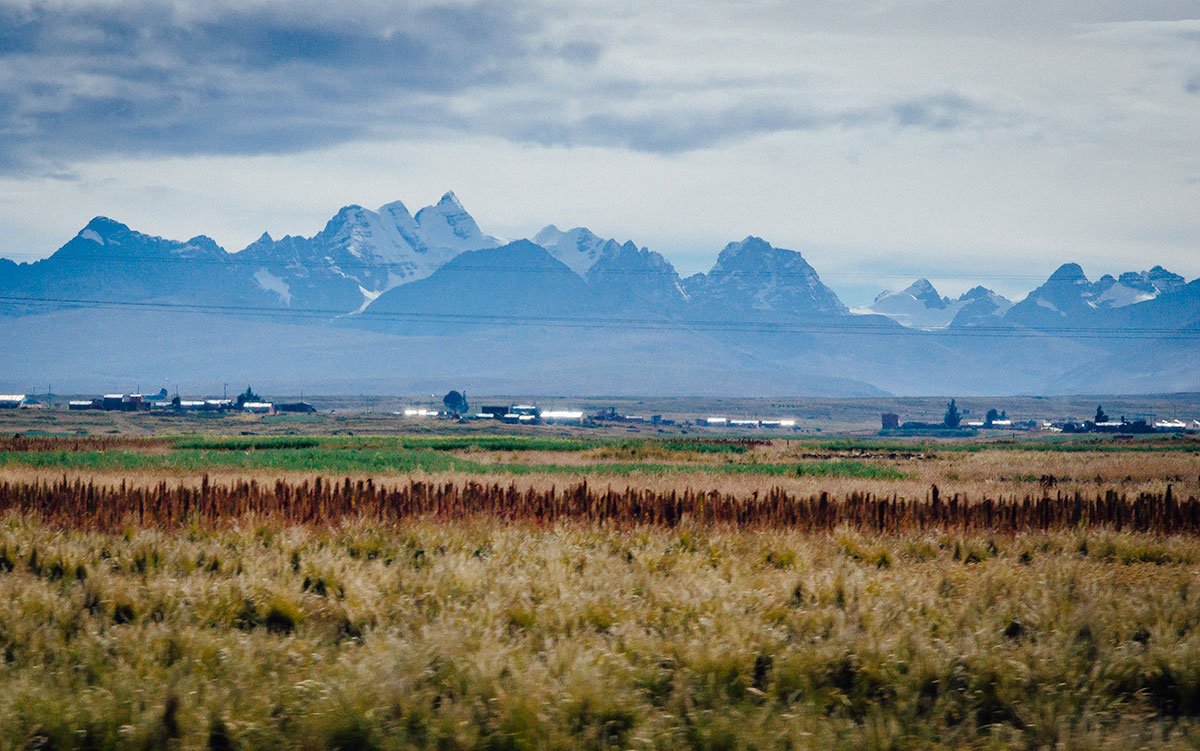 We eventually arrived by the lake, travelling through Huatajarta. 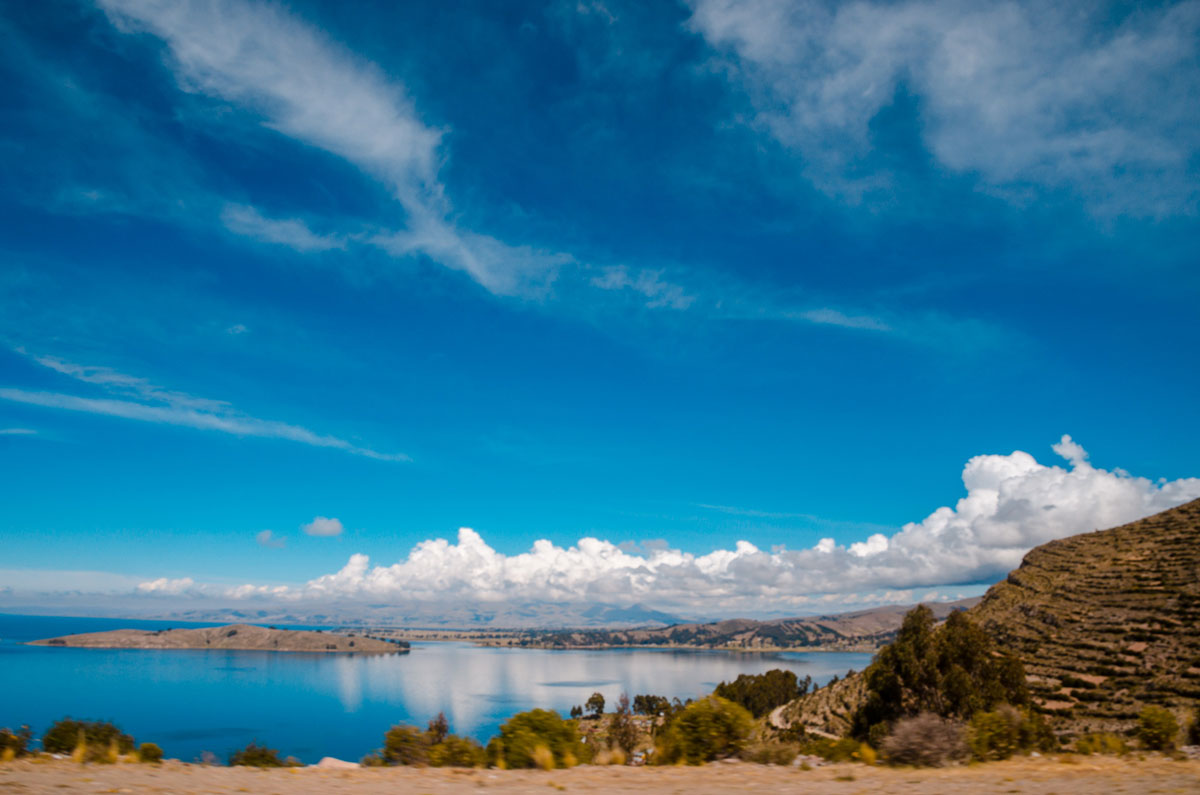 On the way, we saw many local families. 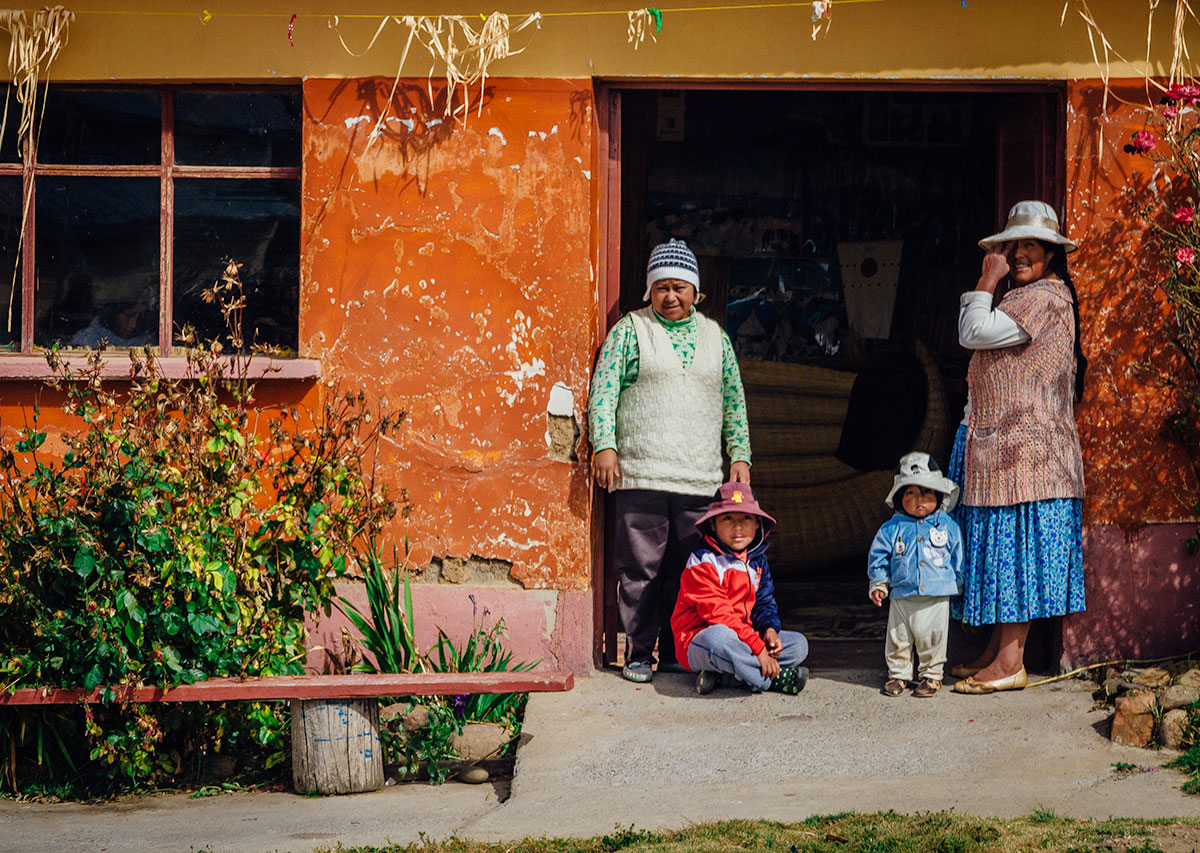 To reach our destination of Copacabana, which is on a peninsula, our bus was one of many ferried across a narrow strait to San Pedro de Tiquina.

There the road followed the shore, wrapped around a mountain. We passed by a little village with dirt roads. 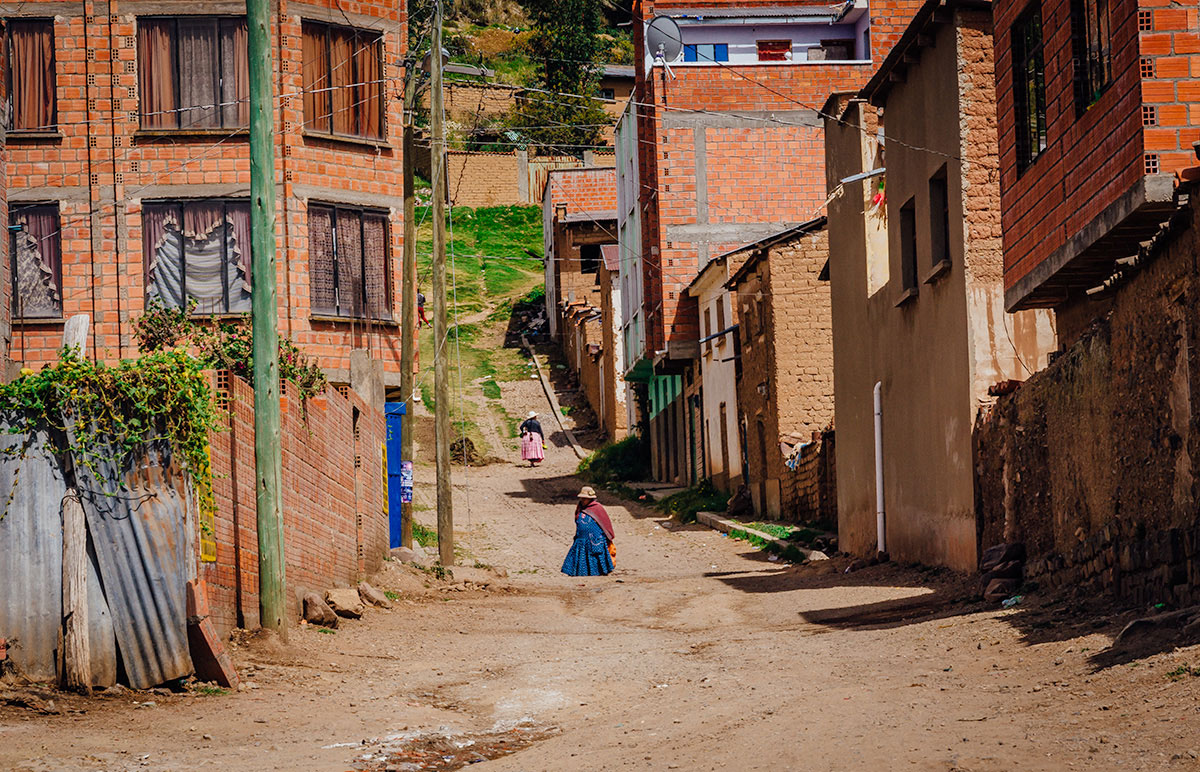 Finally, we arrived at an overlook of Copacabana which is set between two large hills. 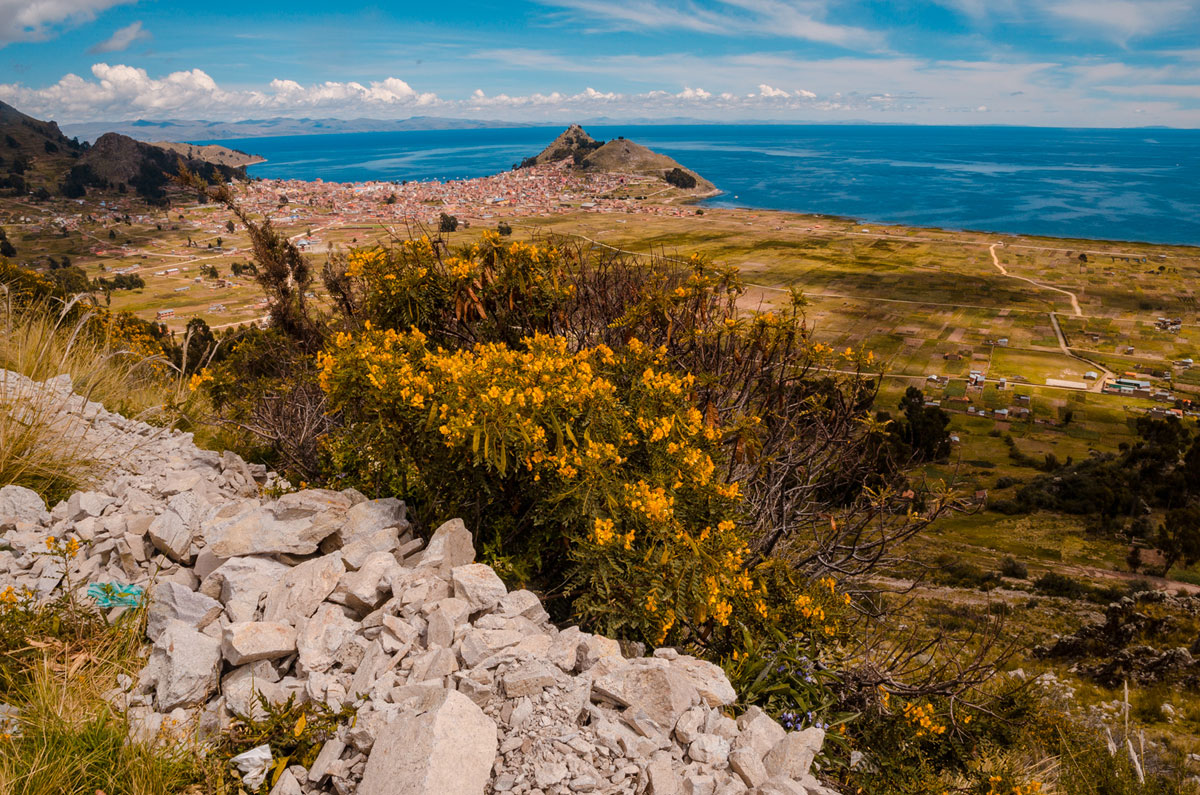 On our first day in the afternoon, we walked through this interesting and picturesque town.

We learned Copacabana is a Catholic pilgrimage site, where devotees from all over the continent come to ask for blessings for themselves and, oddly, their cars. The city’s most famous pilgrimage site is the Basilica of Our Lady of Copacabana. 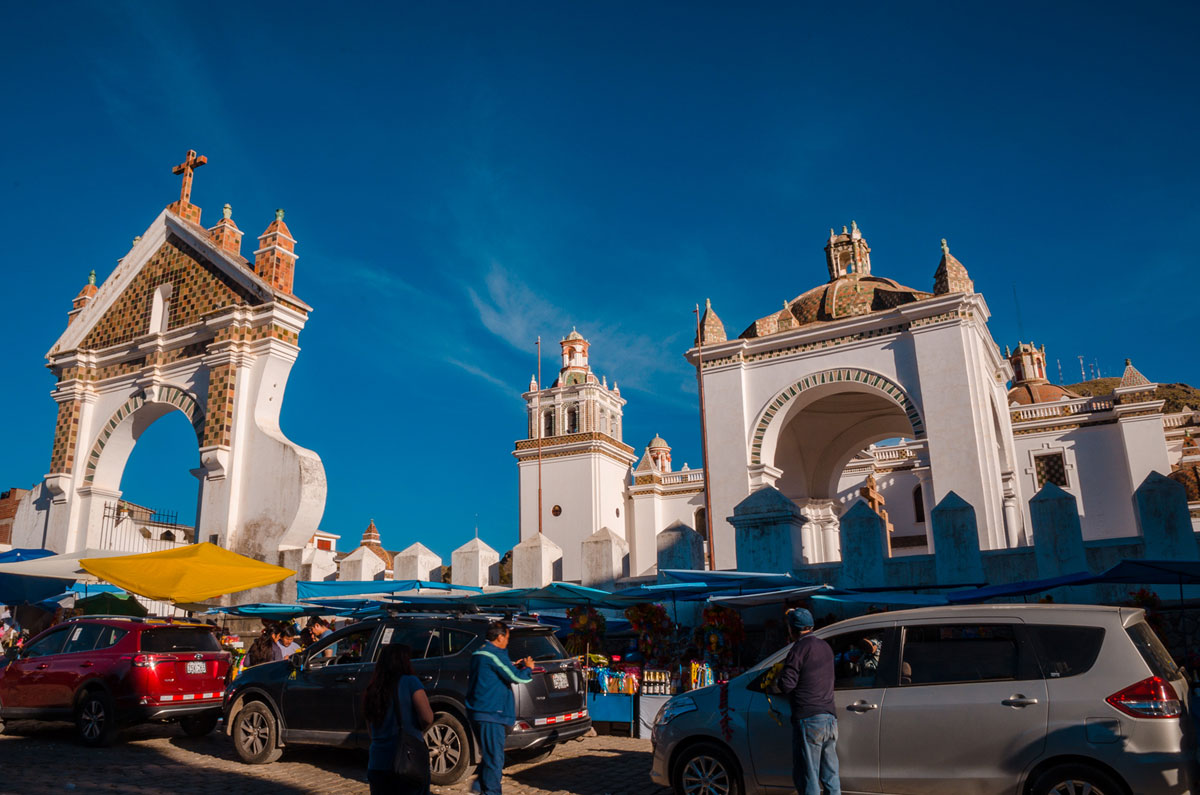 This is the home to the Our Lady of Copacabana, also known as the Dark Virgin of the Lake, who is revered in Bolivia for a series of miracles she is believed to have worked in the area. She is Bolivia’s patron saint and the subject of many festivals. Many believe she still brings miracles and can help the needy. Inside the church, we saw an old lady resting. 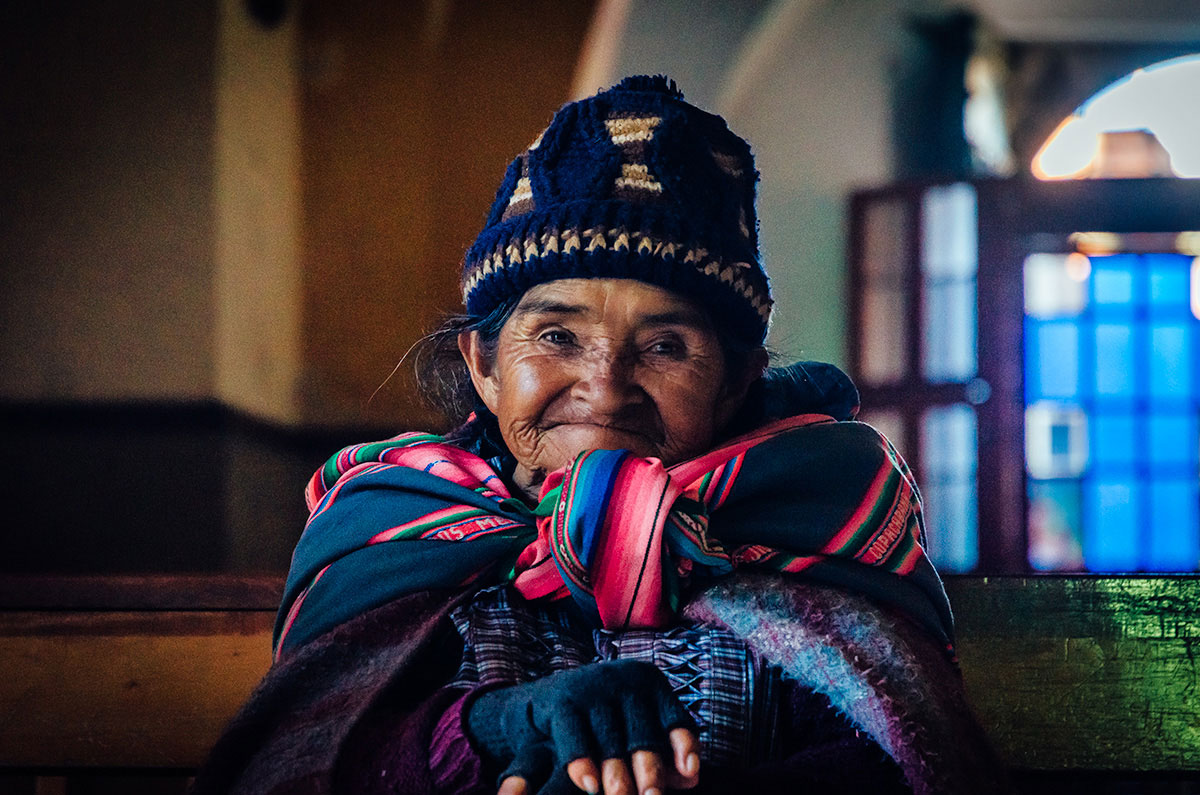 Near the basilica, is Plaza 2 de Febrero (yet another plaza with a commemoration-date name) with a Greek-style statue of a female with a lamb. 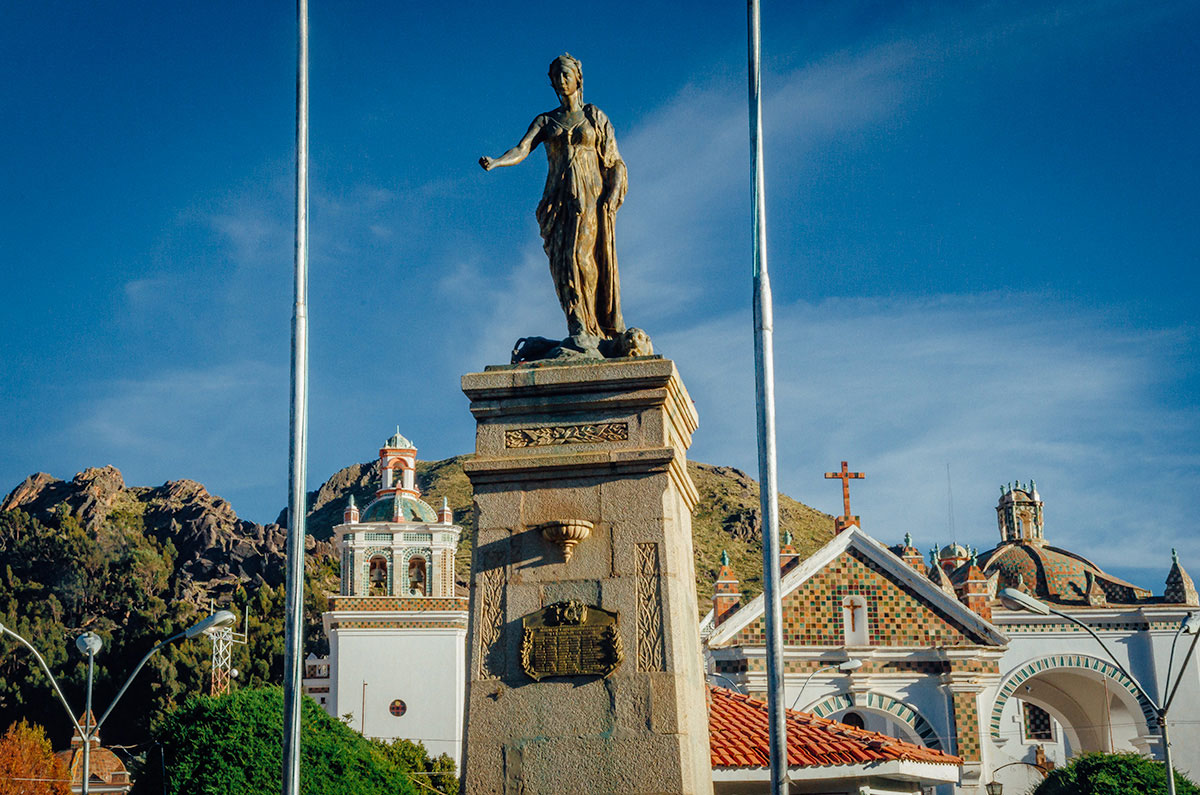 On top of Cerro Calvario (Calvary Hill), is a place where pilgrims of both Christian and Andean faiths (often commingled) hike to the top and leave offerings for Pachamama (Andes fertility goddess). Steve walked up by himself, as part of his conditioning for the Inca Trail hike.

The thrill of Copacabana was the sunset on the harbor. First there is illumination of the hills and boats.

As the light recedes, the objects in the foreground are partial silhouettes. 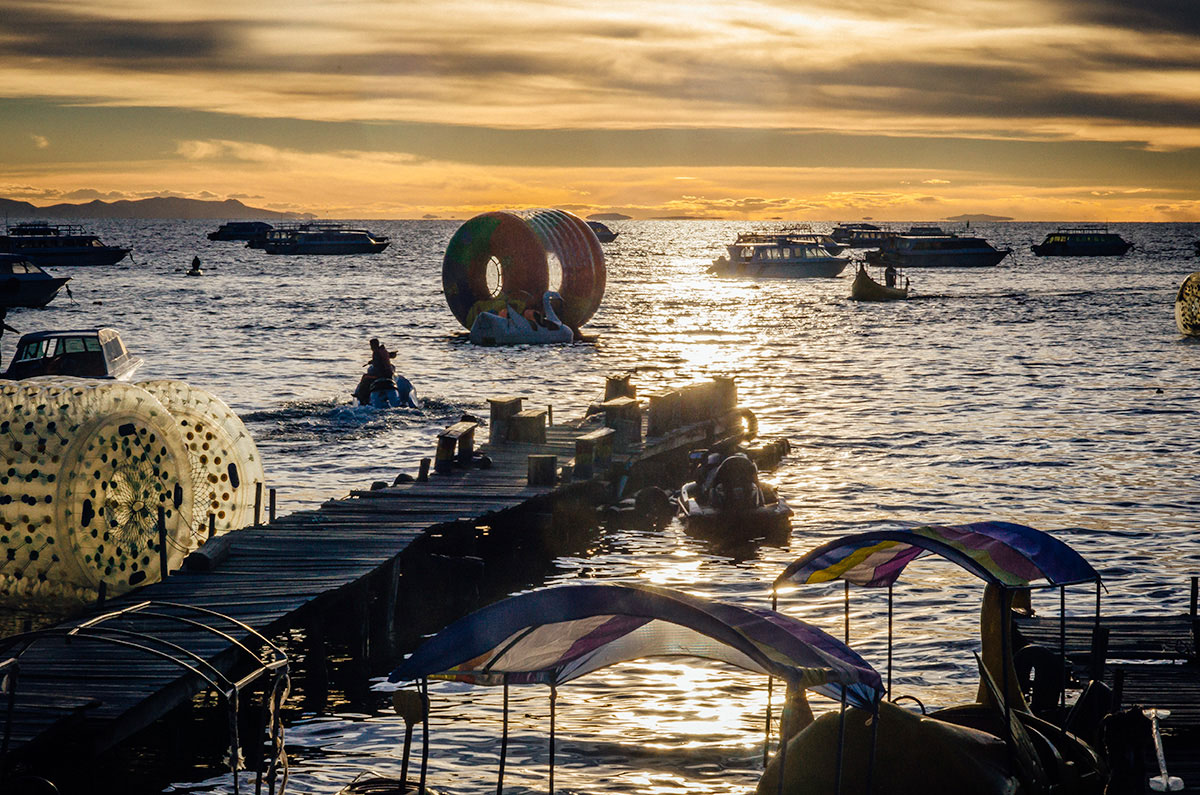 Finally, there is the afterglow, with the last gasp of sunlight on the horizon. 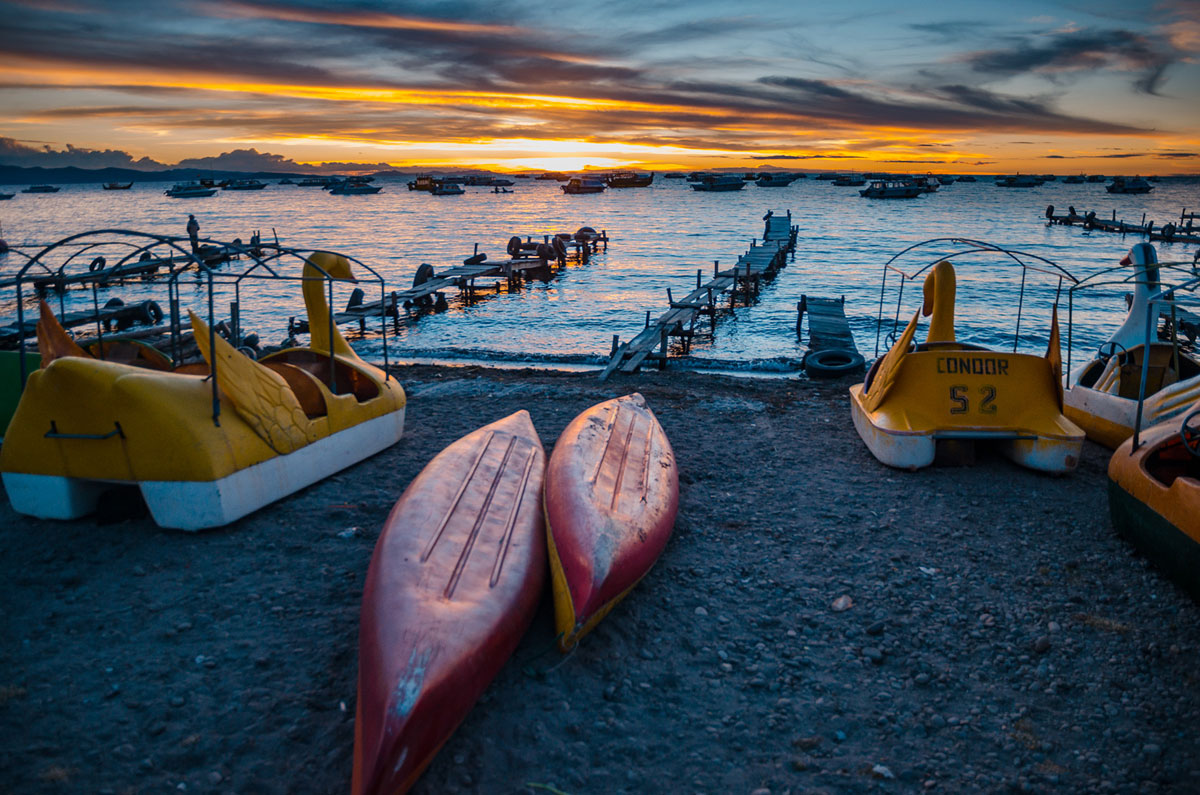 From Copacabana, we left on a ferry at 8:30am the next day. The boat ride was around an hour and a half to the port in Yumani, the main village of Isla del Sol located on the eastern shore.

We started our hike climbing steep steps, one of the many Inca ruins on the island and possibly the most prominent. 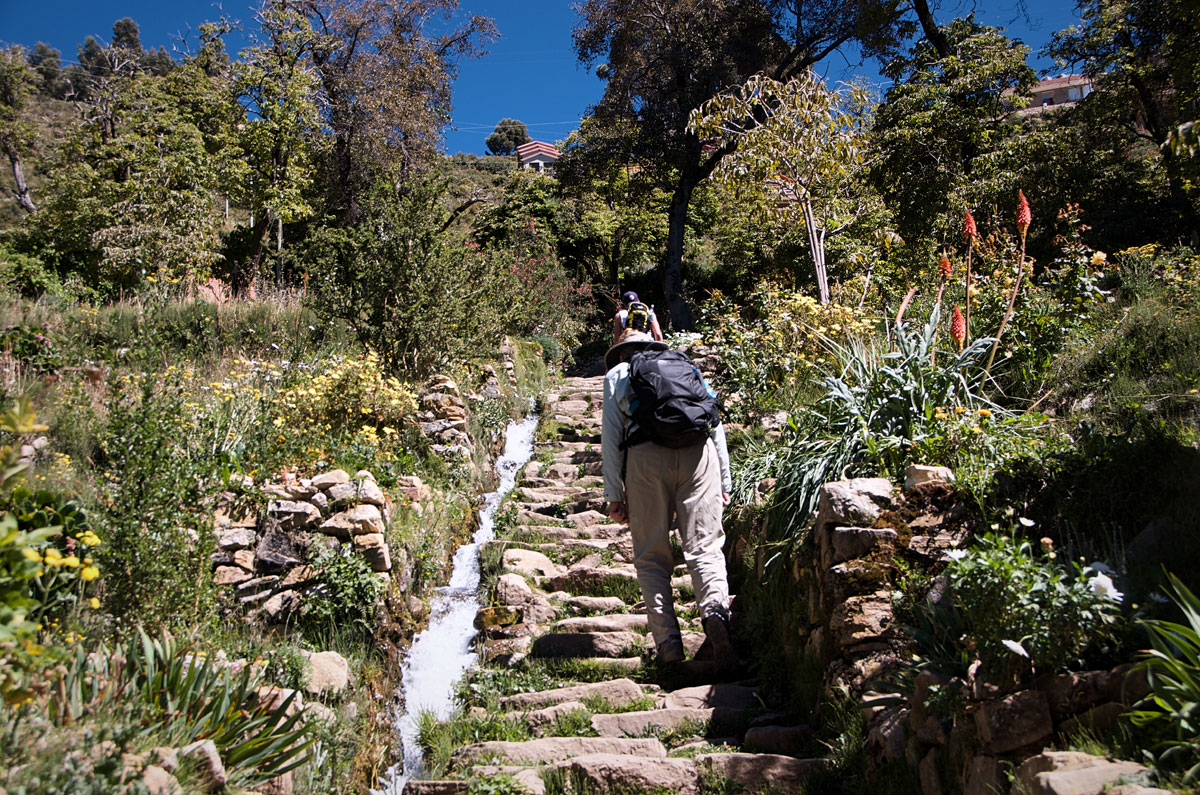 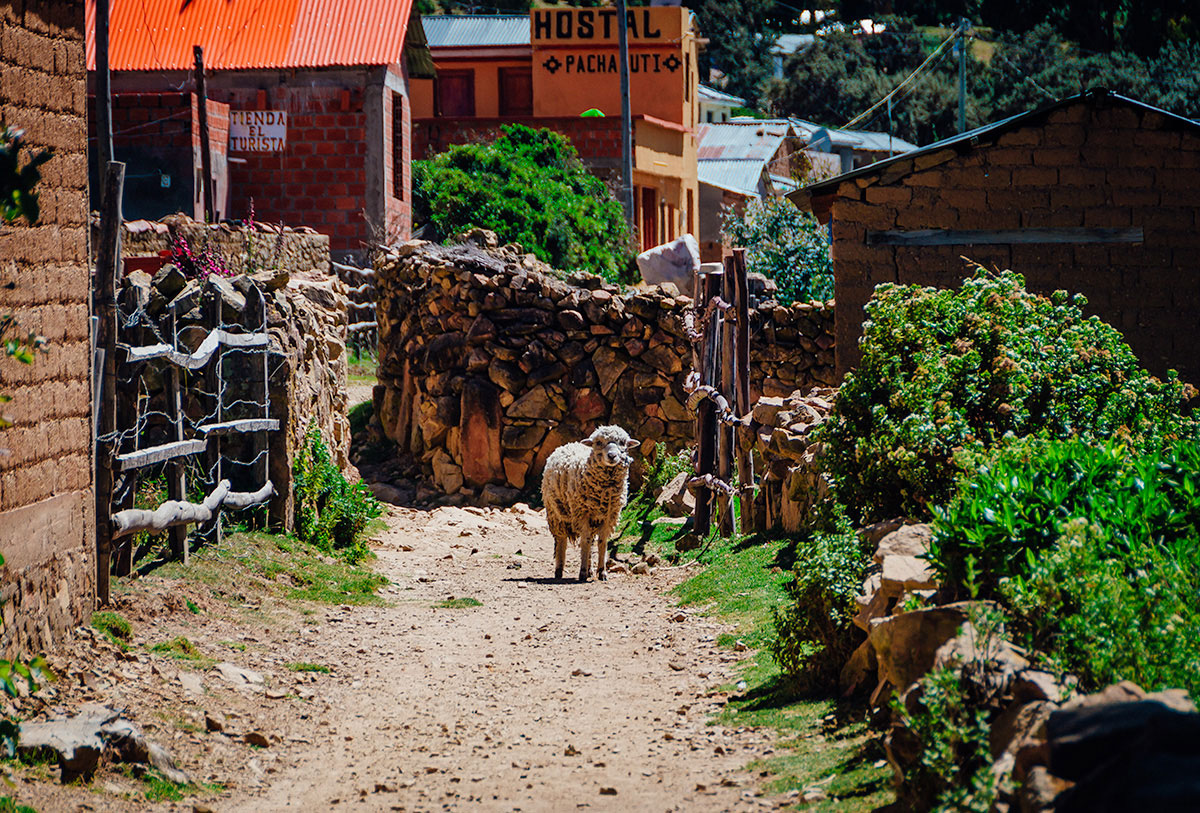 …to the reach the top and the Camino Norte-Sur (North South Road). Once there we had scenic views, especially the landscape (and laundry) on the west side. 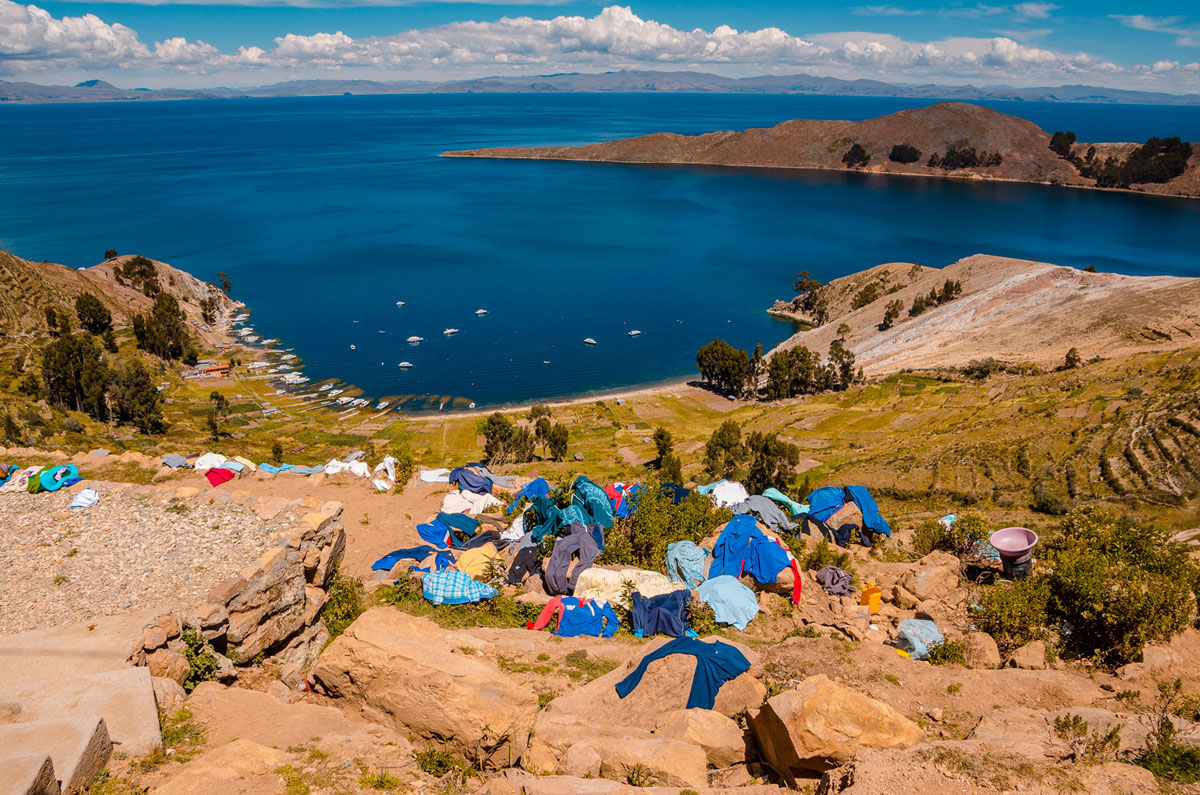 We noticed there were no motorized vehicles. On the trail, we saw this man with his donkey. 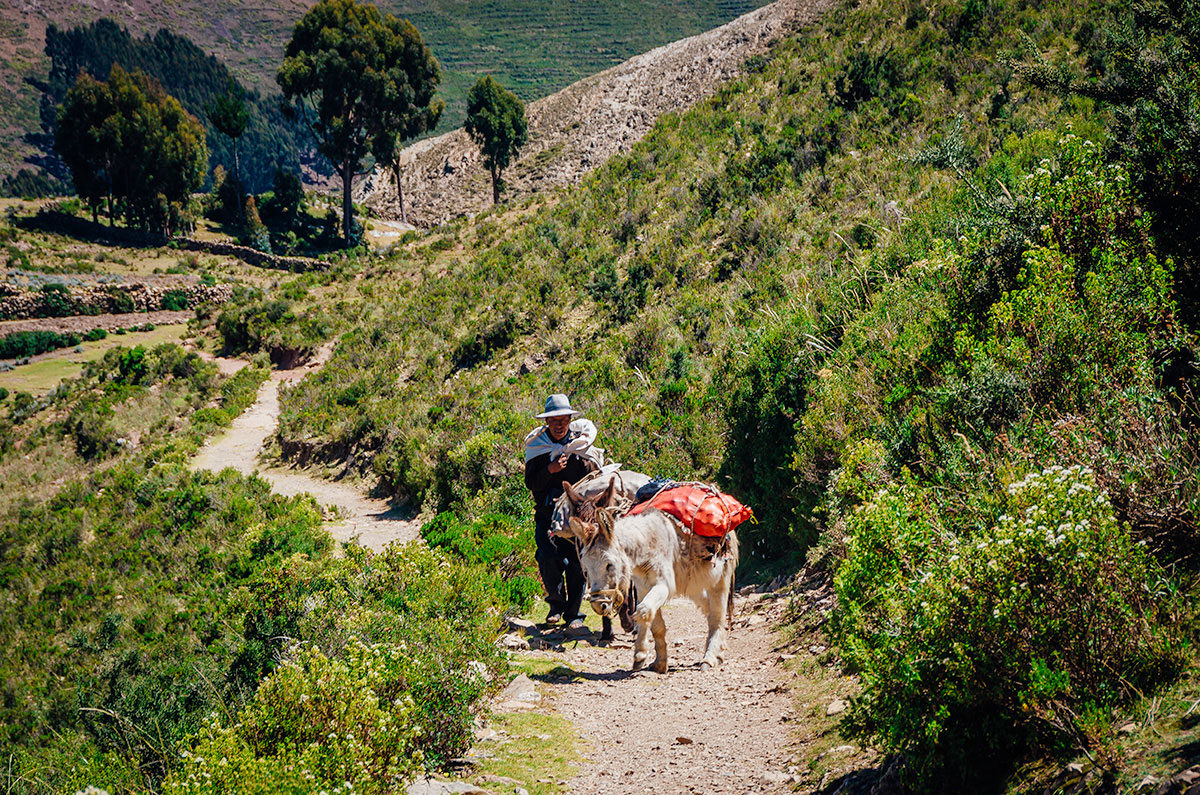 Once we arrived to the northern area of the island, there was a boom-gate that stopped us from going further. There are many rumors as to why the north is cordoned off, but apparently it is a result of a conflict between the north and south of the island. It seems no place is too small to have quarrels between neighbors.

We walked back to Yumani and had lunch at a restaurant overlooking the harbor. On the water edge, we saw a woman with child and her donkey drinking from the lake. 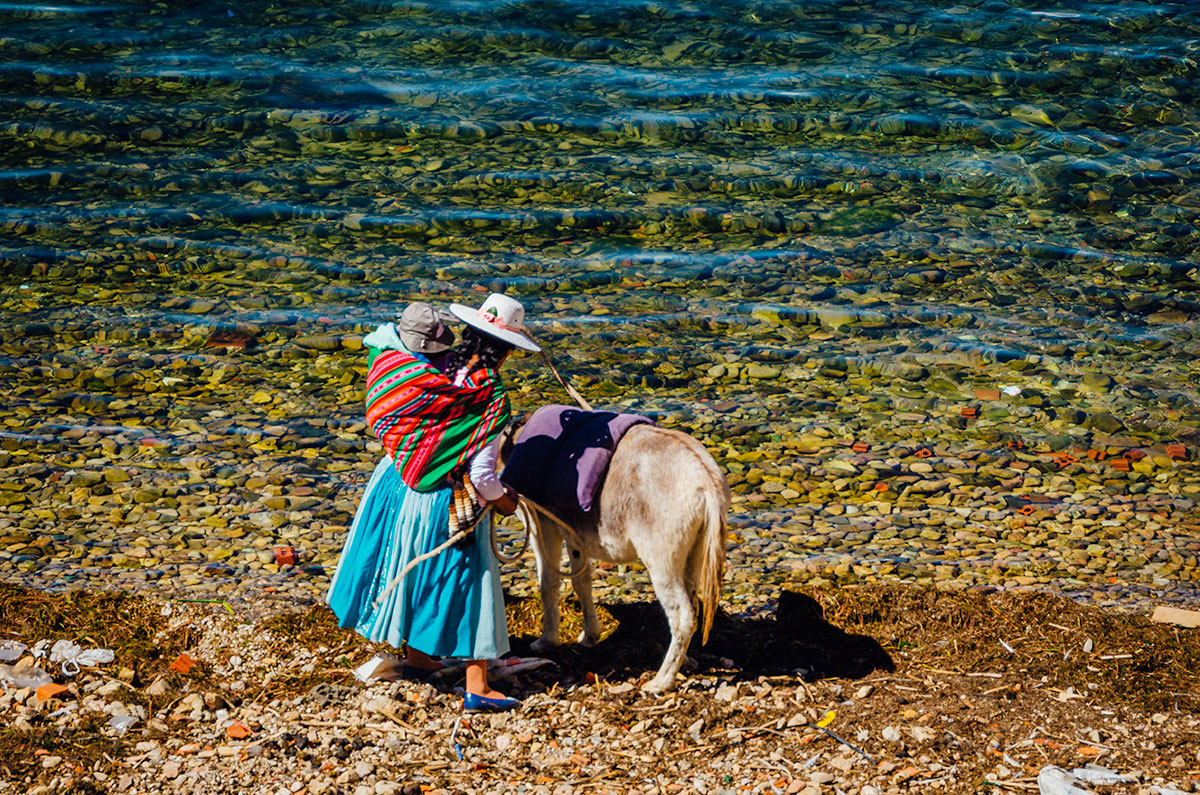 About 3:00pm, we left on our ferry back to Copacabana, where we rested and again watched the dramatic sunset.

The next day we caught a bus for the three-hour ride to Puno (including checking passports at the Peru border). On our bus were four French bicyclists who had ridden over a thousand miles to here, starting in Chile. I believe their final destination was Cusco.

They were tired and decided to take the bus that day. This is understandable, as the four adventurous souls were in their 70s and 80s. They were seniors, but incredibly active and healthy.

Puno and the Uros Islands

While on the bus on the Bolivian side, we bought tickets in bolivianos from the operator for a tour to the Uros Islands. We were told they were cheaper because of the favorable exchange rate. We were skeptical, but luckily it turned out to be true. As soon as we left the bus, a tour company car took us to a boat going to the islands.

The Uros Islands are a collection of floating islands that were founded hundreds of years ago by the Uros people as an effective barrier from the Incas and other hostile tribes. The islands are made up of reeds and have been maintained along with traditional homes. 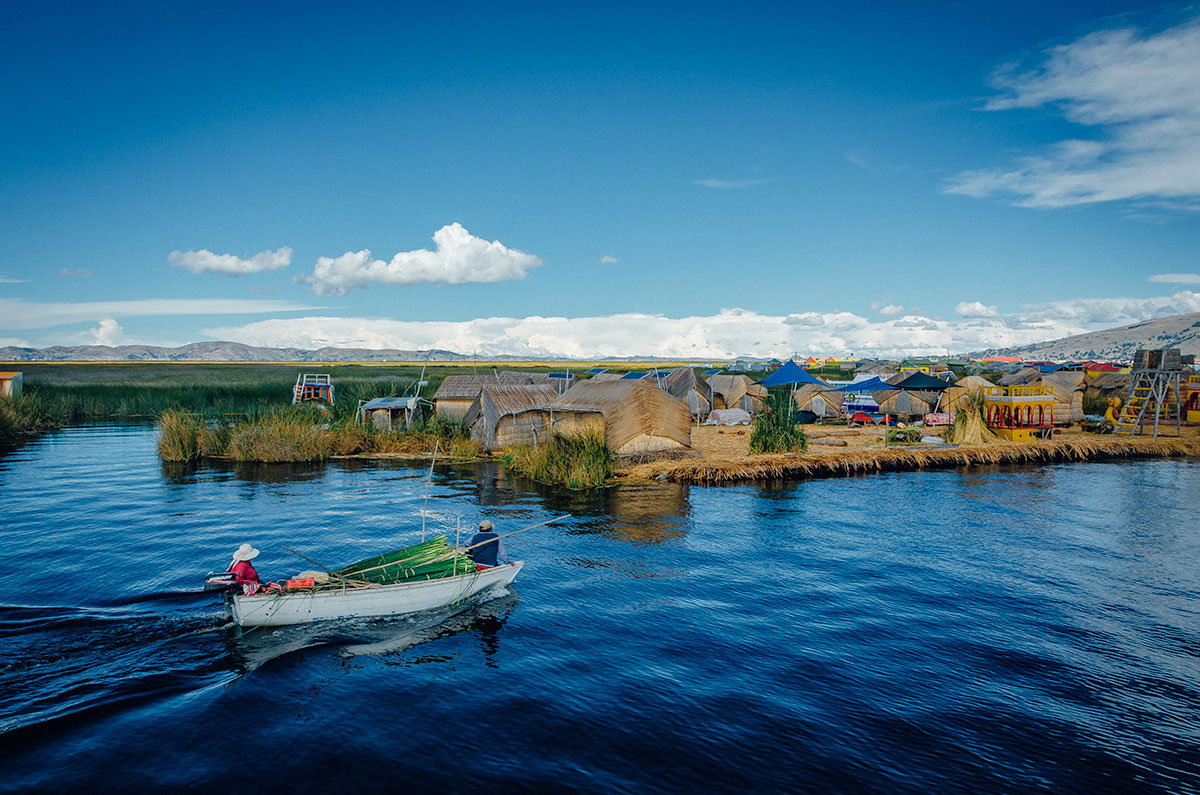 Tourism makes up the largest part of the islanders’ income, though they also make money from fishing. Now, most of the population does not live on the islands but in Puno and commute to Uros to explain and demonstrate traditional practices and history to tourists…

…and to sell locally made textiles. 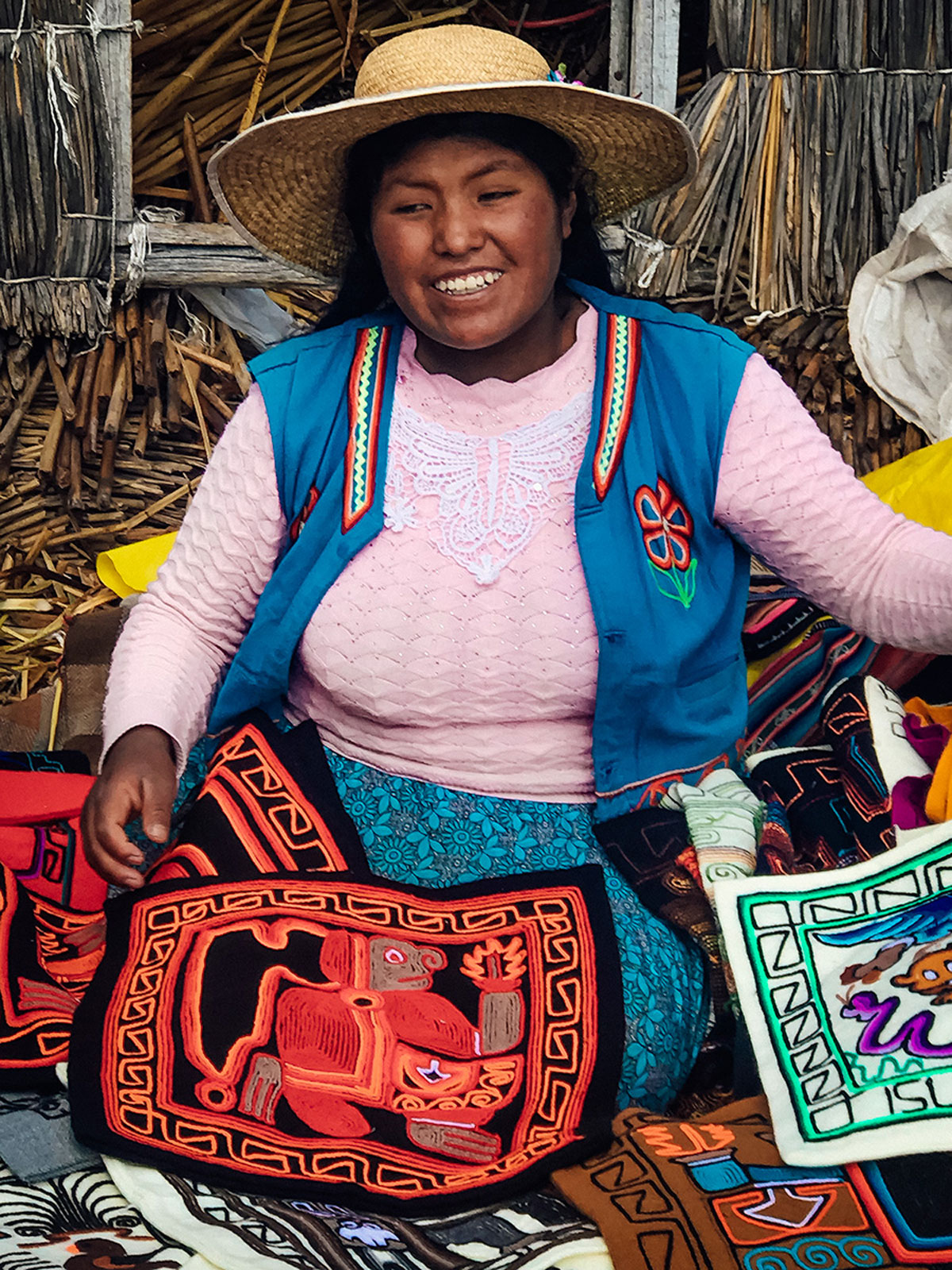 While this is a show for the tourist, it is interesting to learn how they are constantly fortifying the islands with straw. 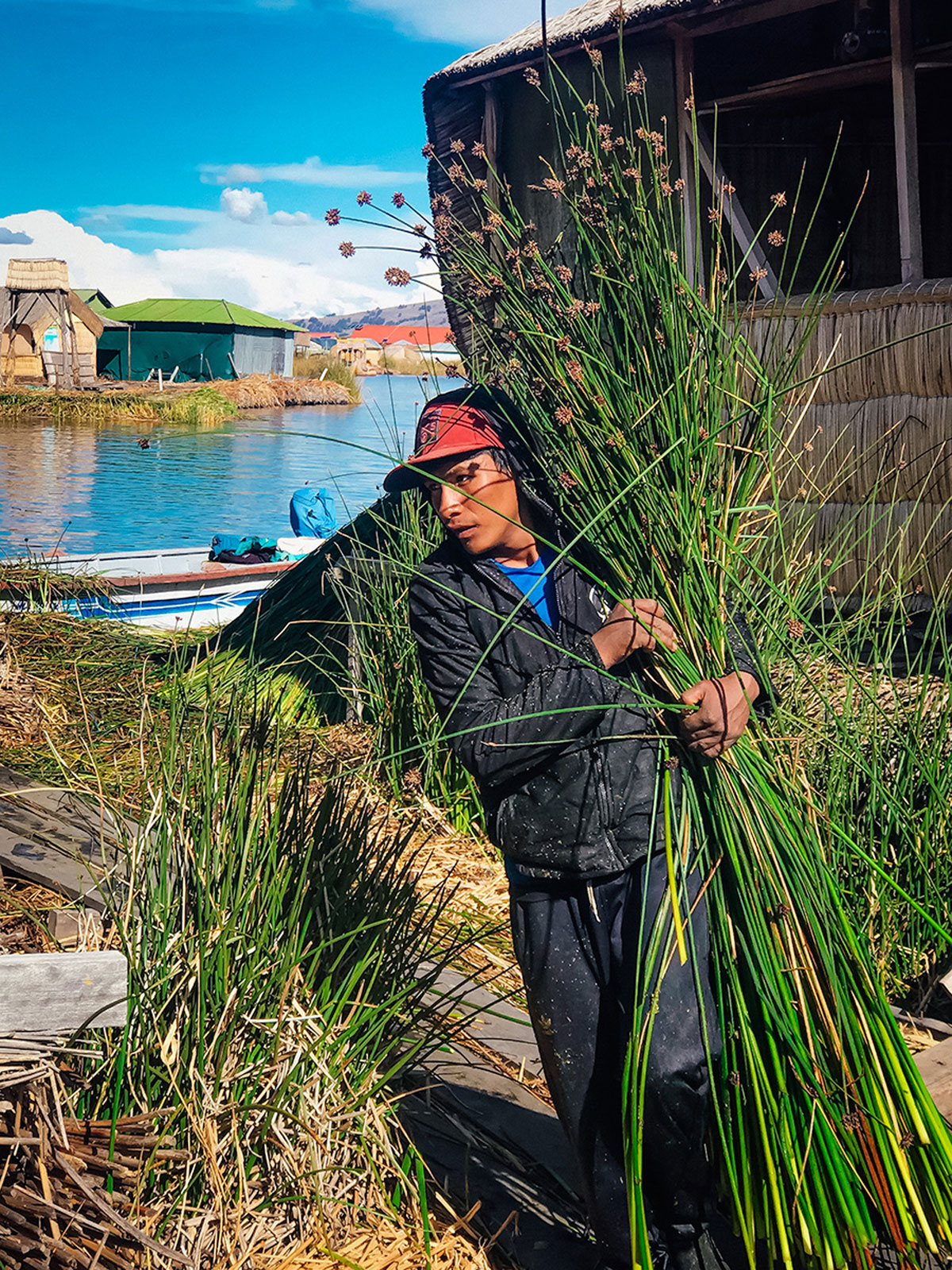 The most amazing sights are the boats they make from reeds. 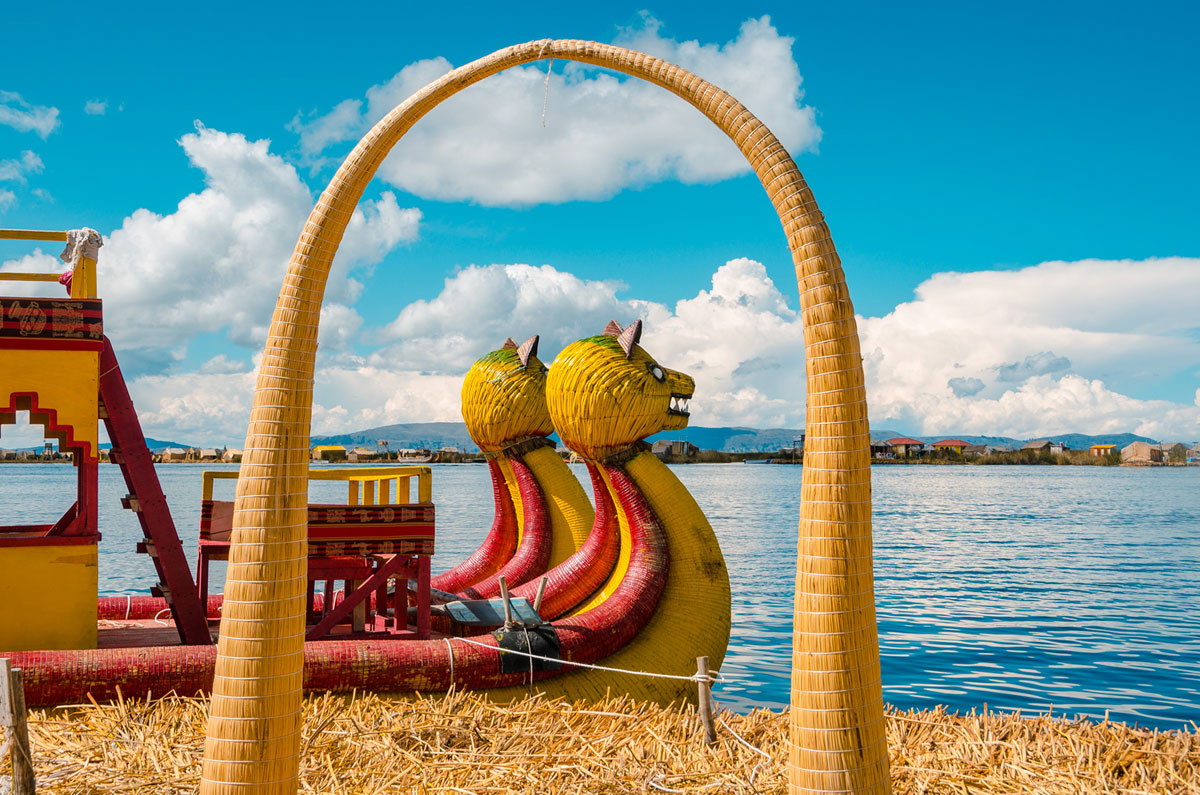 Reed boats have been around thousands of years. They were depicted in petroglyphs early in ancient Egypt. A similar design has been found in the archeological record of Eastern Islands. They are still used in Ethiopia. In 1969 Thor Heyerdahl attempted a trans-Atlantic crossing on a reed raft made of Egyptian papyrus. The journey on Ra I was a disaster because the boat quickly deteriorated on the journey. In 1970 Heyerdahl contracted boatbuilders from Lake Titicaca to fly over to Morocco and build the Ra II boat for him which successfully crossed the Atlantic.

After our tour, we stayed the night in Puno. The city is small without many attractions. However, we especially liked two of the churches. The Puno Cathedral, on the central Plaza de Armas, has two bell towers and ornate stone facade. 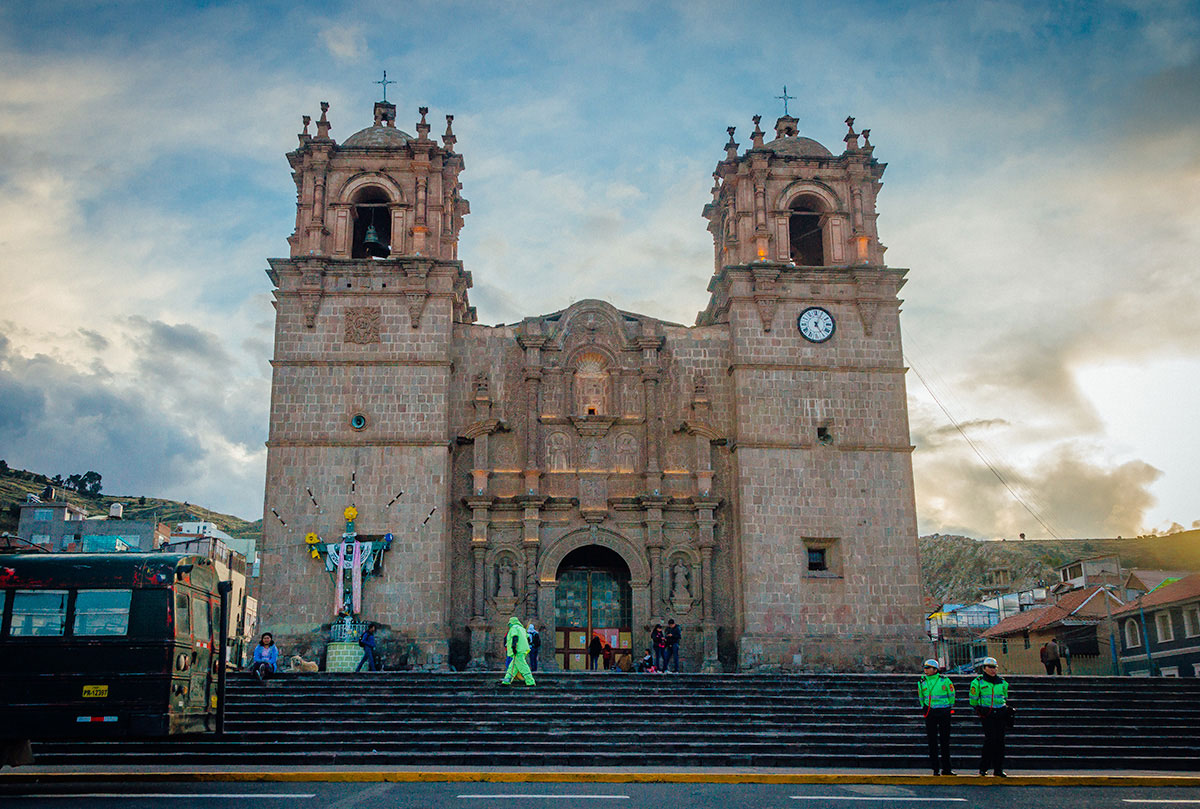 The inside has rich decorations, but overall a restrained look for a Catholic church.

The San Juan Church is located in Parque Pino (Puno Park). In contrast to the grand cathedral, this was built as a simple chapel 200-years ago for the poor residents. Instead of stone, adobe was used. 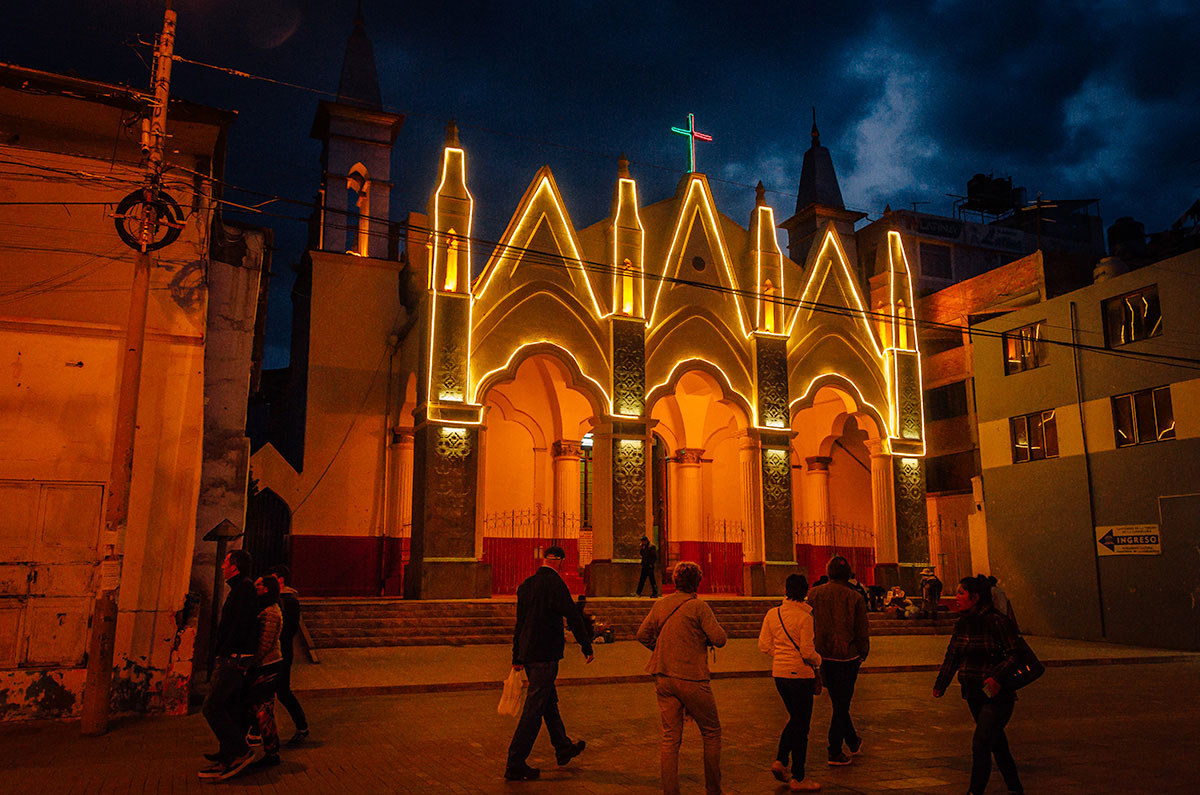 While humble in origin, the church has a snazzy French Gothic facade which is lit at night.

The next day we hired a taxi for the hour-ride to the airport in Juliaca for our flight to Cusco. For almost all travelers, Juliaca is of interest only because of the airport. It has a reputation of a entry-point for drugs and other contraband. However, while we were driving through, I liked the dusty and industrial look of it. 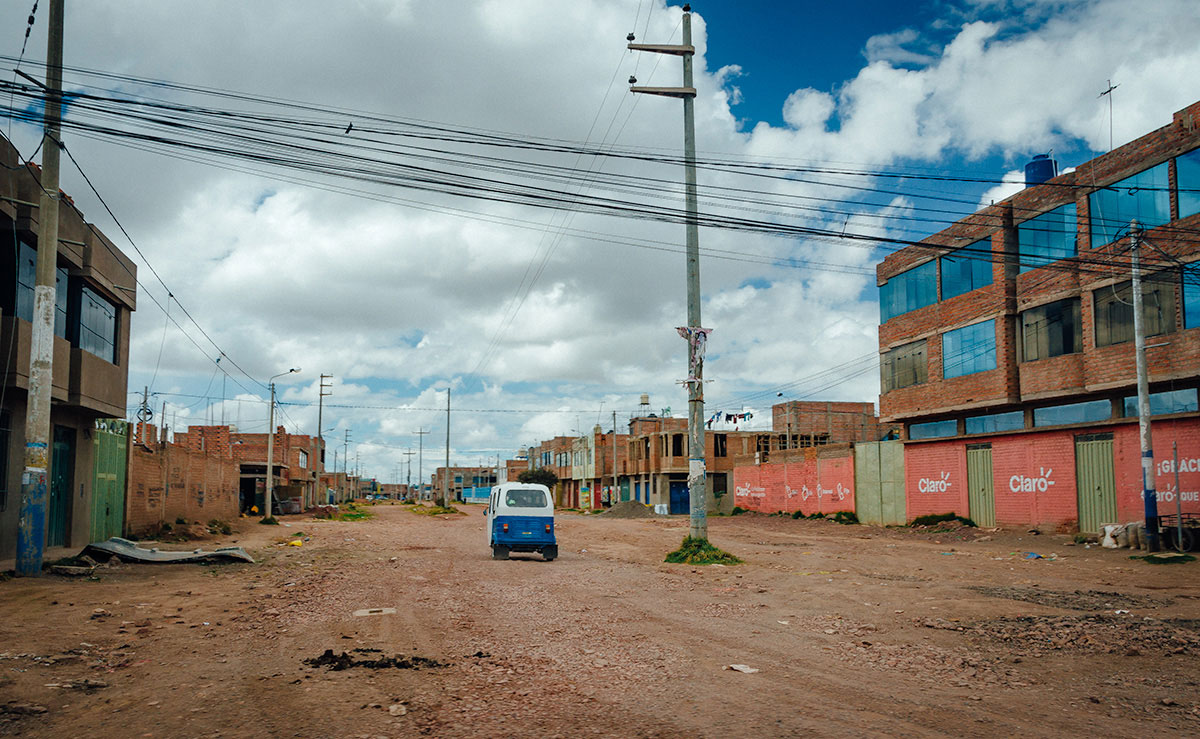 I was intrigued by this woman on the corner selling saltenas, which is a type of baked empanada filled with beef, pork or chicken mixed in a sweet, slightly spicy sauce containing olives, raisins and potatoes. 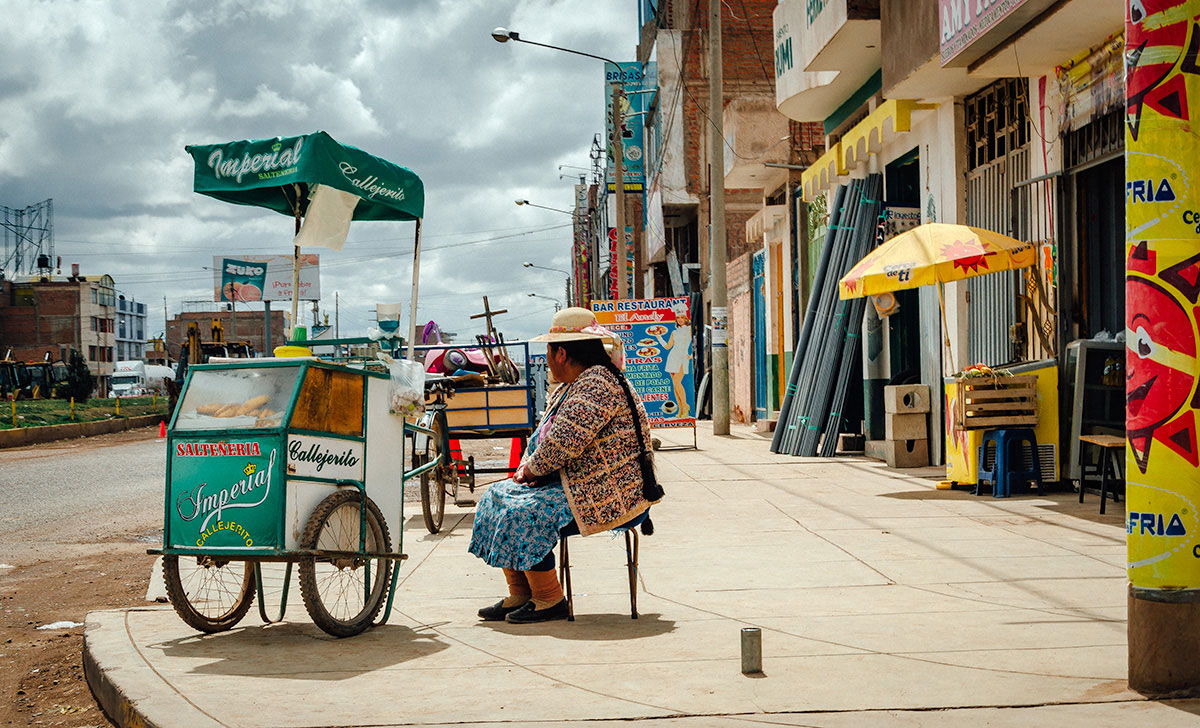 Khadija, Steve and I flew to Cusco, our last stop before the Inca Trail hike. Our friend Nick joined us there to share in the adventure. For this interesting experience, see Peru Part 1 –Cusco and the Sacred Valley.