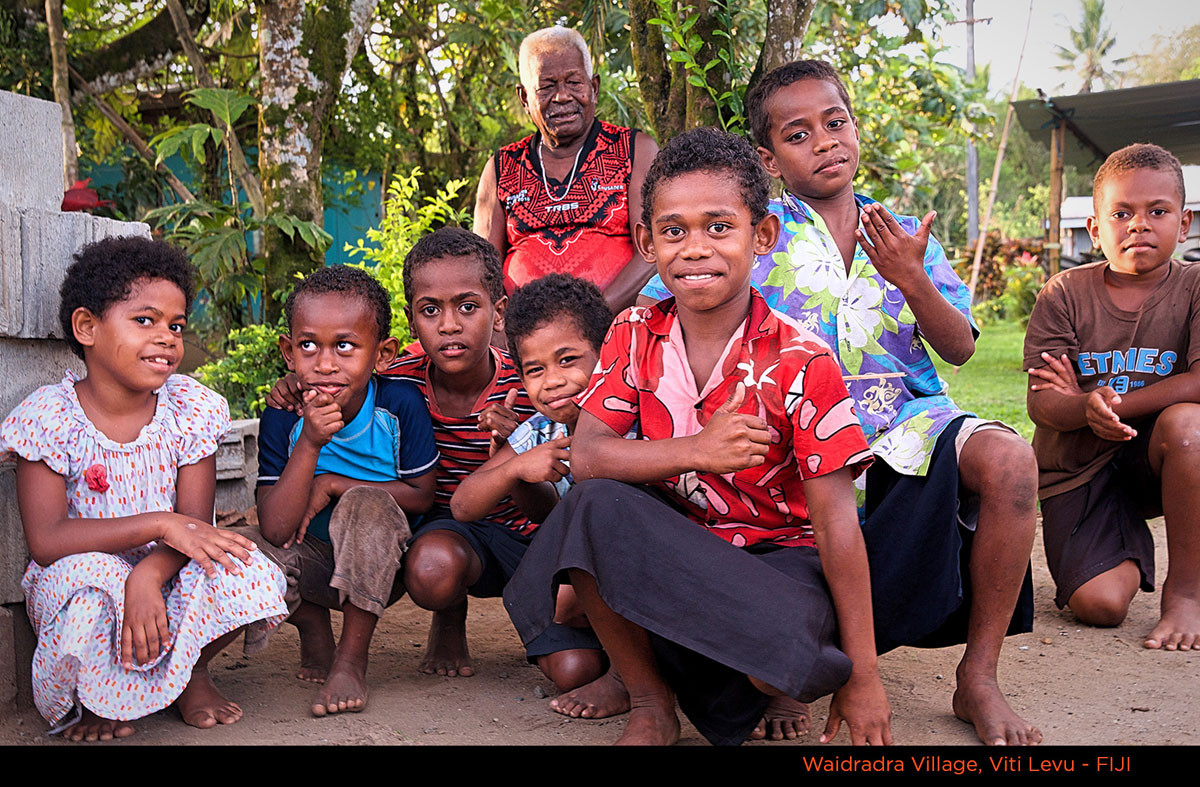 Nadi International Airport is the main airport in Fiji and a busy hub for travel to other South Pacific islands. Many Pacific travelers stopover here and have an opportunity to spend a few days in the beautiful country of Fiji. This post recaps our experience over three days on Fiji’s main island of Viti Levu. I went with my wife Khadija and our friends Peter and Caitlin, on our last stop in October 2019 of a six-week Pacific vacation. 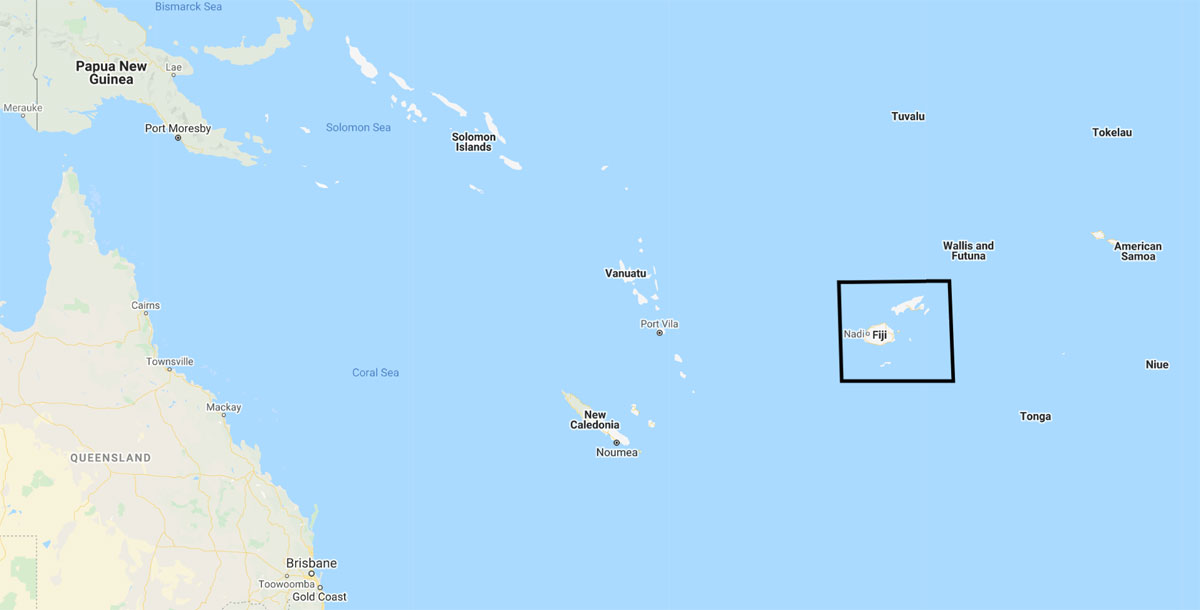 Nadi is about a four-hour flight from Sydney and almost eleven-hours from Los Angeles.

It’s on the eastern edge of Melanesia (with New Guinea Island, Solomon Islands, Vanuatu, and New Caledonia) and borders Polynesia.

Fijians are rightly considered some of the warmest and happiest people in the world and have a vibrant culture. The country has been independent since 1970 and has developed a tourist infrastructure, which makes traveling easy and relaxing.

Fiji is famous for an abundance of alluring coastal fronts and water adventures. 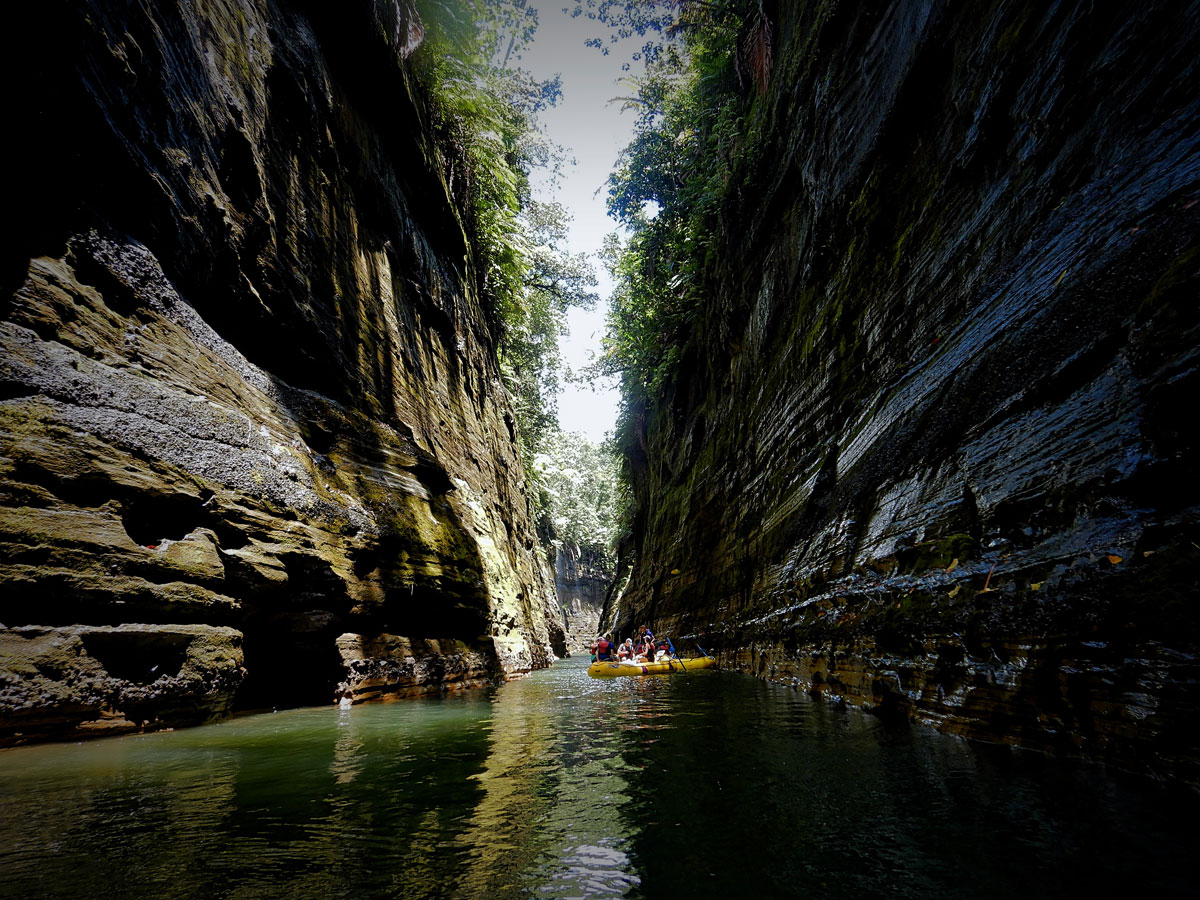 The Fijian culture is a rich tapestry of ethnicities. Native Fijians are Melanesians, many with Polynesian ancestry as well, and are about 55% of the population of 900,000. Indo-Fijians, who are descendants of Indian laborers brought here by the British in the 1800s, are almost 40% of the population. The remaining are Chinese, Europeans, and others. Most native Fijians are Christian, and Indo-Europeans are either Hindu, Muslim, or Sikhs. Fiji has three official languages: Fijian (in the Malay-Polynesia family), English, and Hindi and pidgin mixtures of the three.

Tourism is a vital industry in Fiji, and locals have a great incentive to ensure it’s safe for visitors. We never felt unsafe at any time. But like any other country, Fiji is not exempted from crimes and dangers, and reasonable caution should be used, especially at night or alone.

Where We Traveled in Viti Levu

Viti Levu is the largest island in Fiji (roughly the size of Connecticut or Cyprus) and is home to 70% of Fiji’s population. The name means “Great Fiji,” and the capital Suva is located here.

Suva is about 200 km (120 miles) from Nadi Airport and takes about three and a half hours to drive without stopping.

Khadija’s and my flight from the Solomon Islands was delayed six hours, and we didn’t arrive at the Nadi Airport until 3AM. We stayed in Tokatoka Resort, next to the airport, in a suite. I used the well-equipped gym, and we had a good breakfast by the pool. The other guests were mostly young couples and families with young children.

Through our next hotel, we arranged for Knox of Focus on Fiji to pick us up in a red van at the resort. We then went to Denarau Island Ferry Terminal and met Peter and Caitlin, who stayed at a resort nearby. The terminal had restaurants, cafes, travel services, and retail stores. After a much-needed cappuccino (we didn’t have much sleep), we hit the road.

Sigatoka Sand Dunes is an important archeological site with burial plots and 2500-year old pottery of Fiji’s first inhabitants, the Lapita people. It was established as a National Park in 1989 and is being considered for a UNESCO World Heritage Site designation. The park has a network of walking paths winding to the ocean. 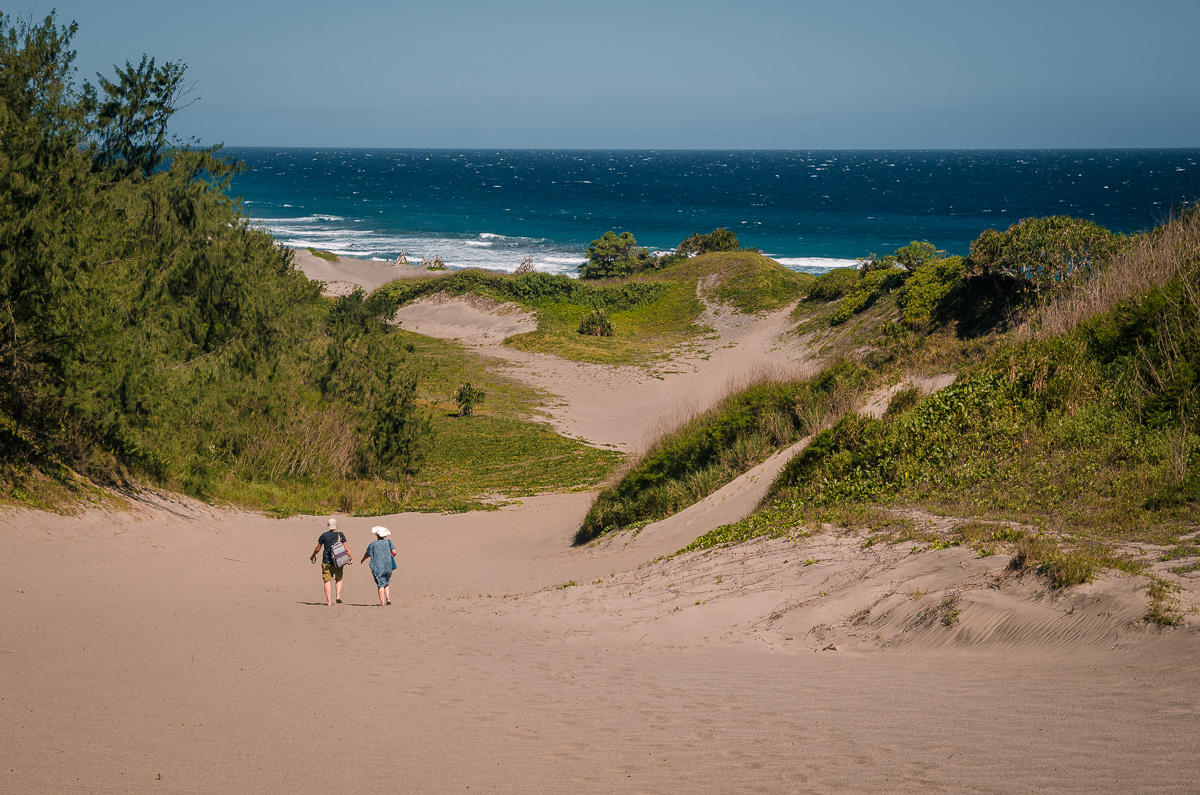 On the coast, we saw these piles of bleached branches and wondered if they were for bonfires. We later found out these were placed to protect vegetation. 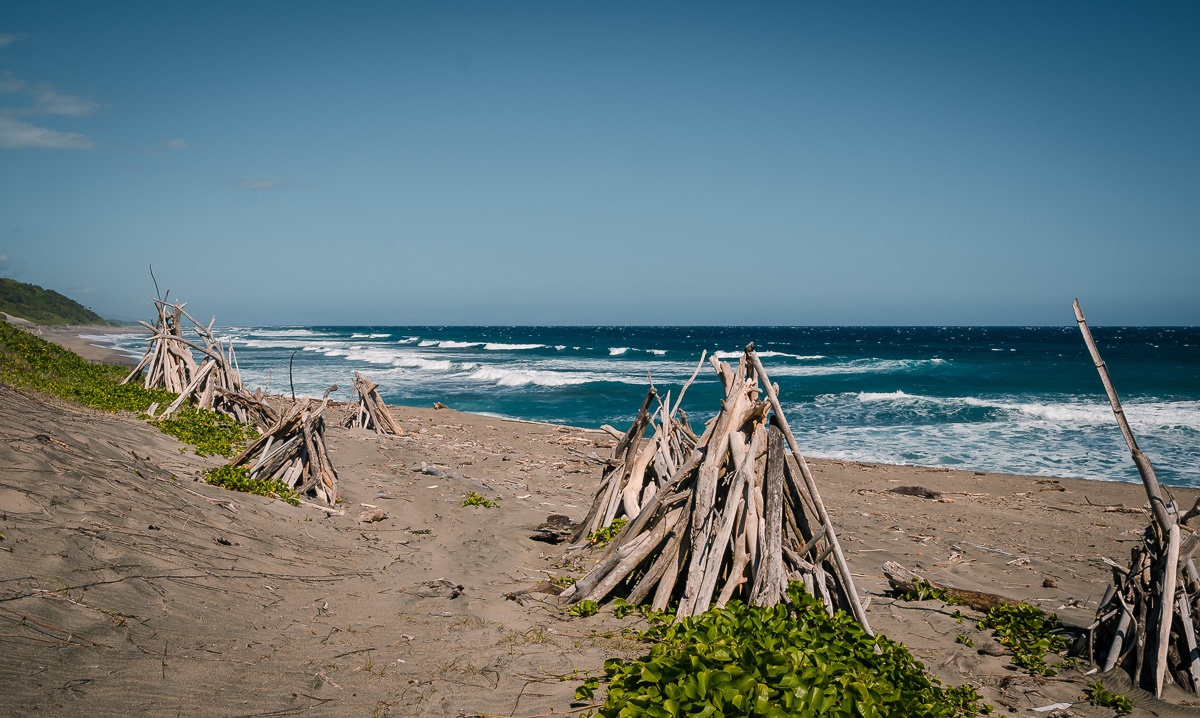 When walking back to the entrance, things became weirder when we walked through a wooded area and saw these Blair Witch Project human representations. 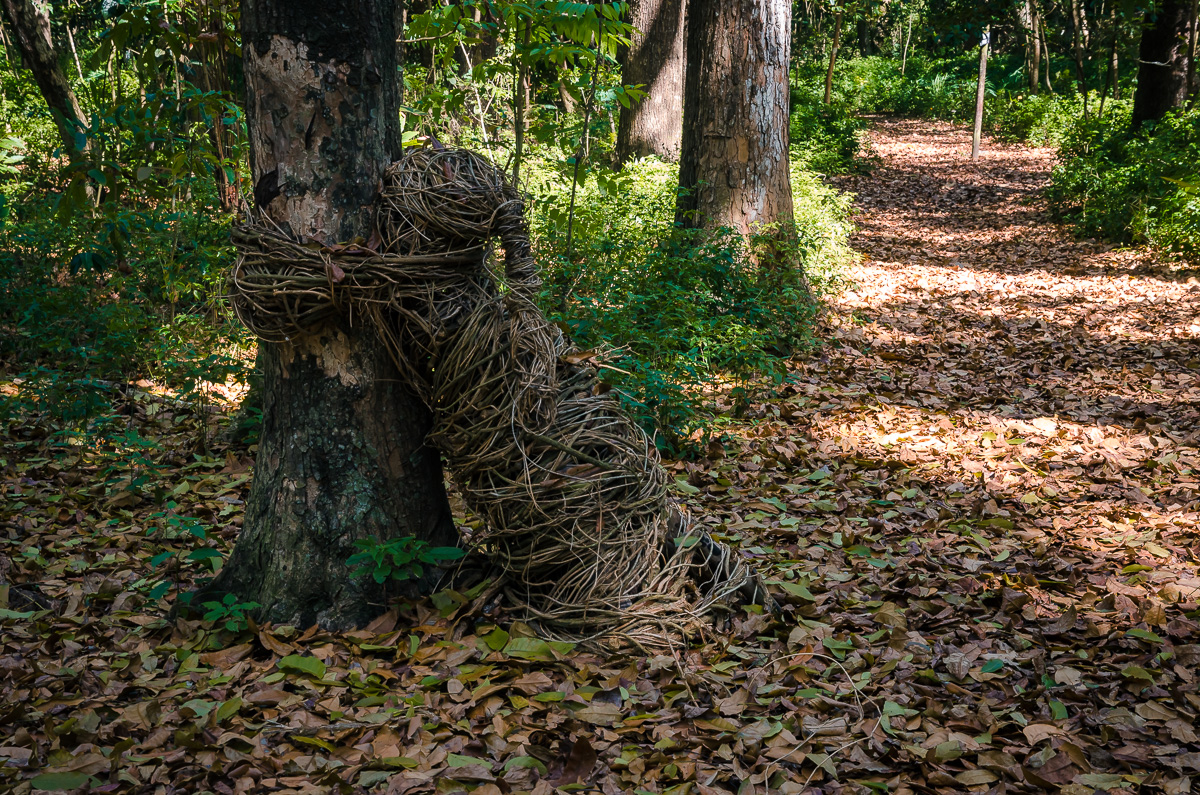 These turned out to be art displays of tree-huggers to highlight the need for conservation.

We asked Knox if we could visit a local church service as it was Sunday. He took us to Waidradra (Red Water) Village, and service was in progress with a passionate sermon taking place.

Religion is important in native Fijian society. On our flight back to San Francisco on Fiji Airways, a flight attendant told us she drives four-hours one-way to her church on Sunday. That is a level of devotion I have hardly seen.

Outside the church, we walked through the village and interacted with folks of all ages. 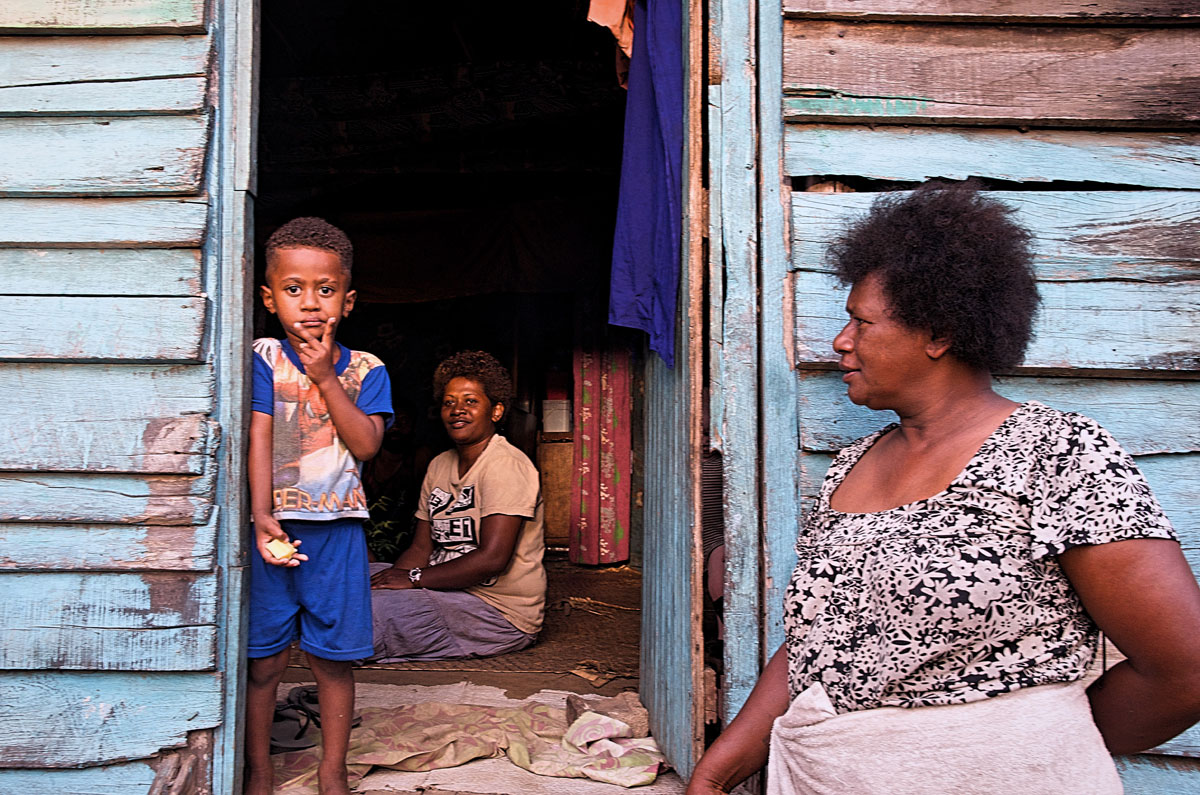 Afterward, we drove to the nearby town of Pacific Harbour and checked into a two-bedroom apartment at the Fiji Palm Beach Resort, where we stayed our last two nights. It was a reasonably priced place and close to beaches, snorkeling, fishing spots, zip-lining, and golf courses.

We were picked up at 6am by a Rivers Fiji bus and taken to their office to pay. Then with another bus, we went into the densely-forested highlands to the Upper Navua River in the early morning light, 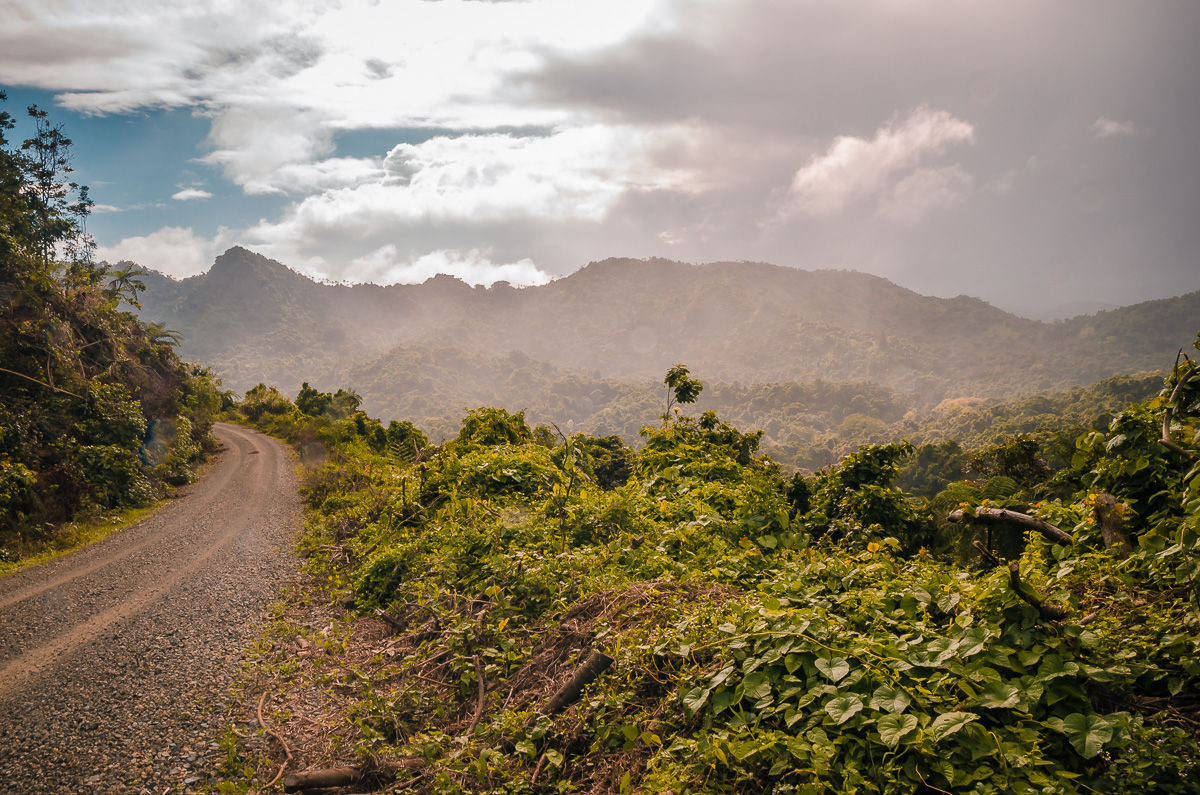 On the way, we took a few breaks to stretch and admire the vistas. 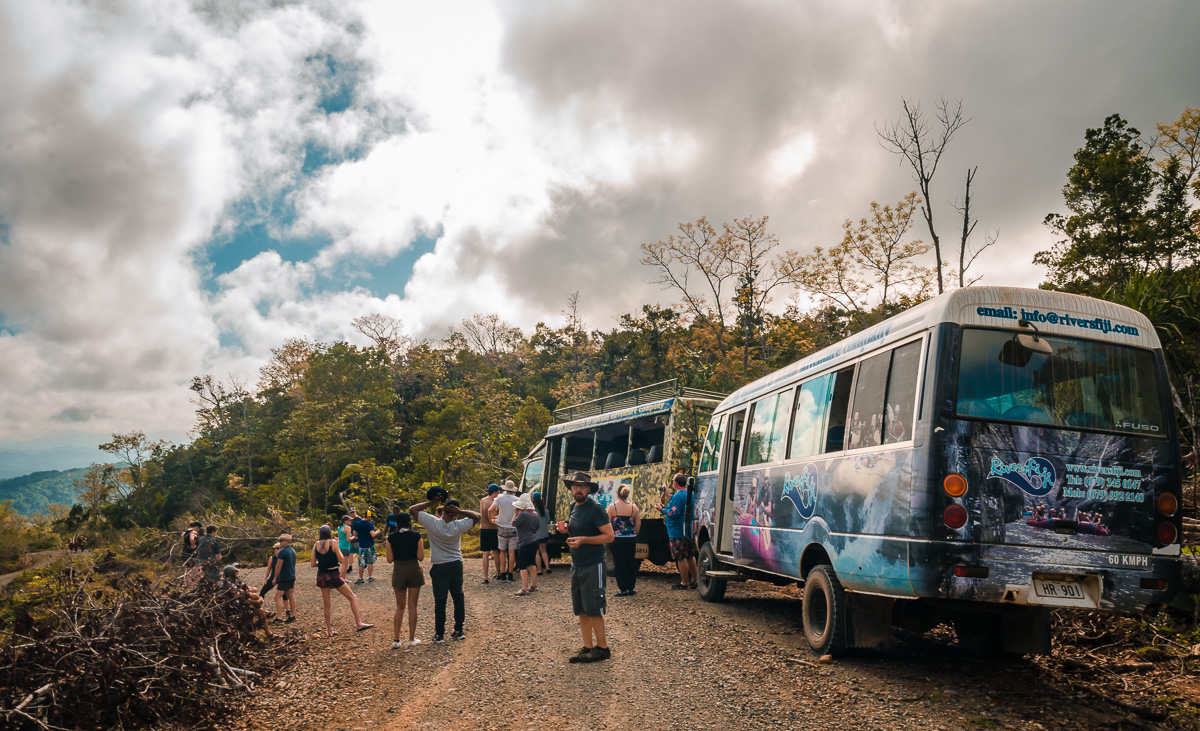 This was the start of our all-day, white-water rafting adventure, which required us to wear helmets and life jackets and use paddles. 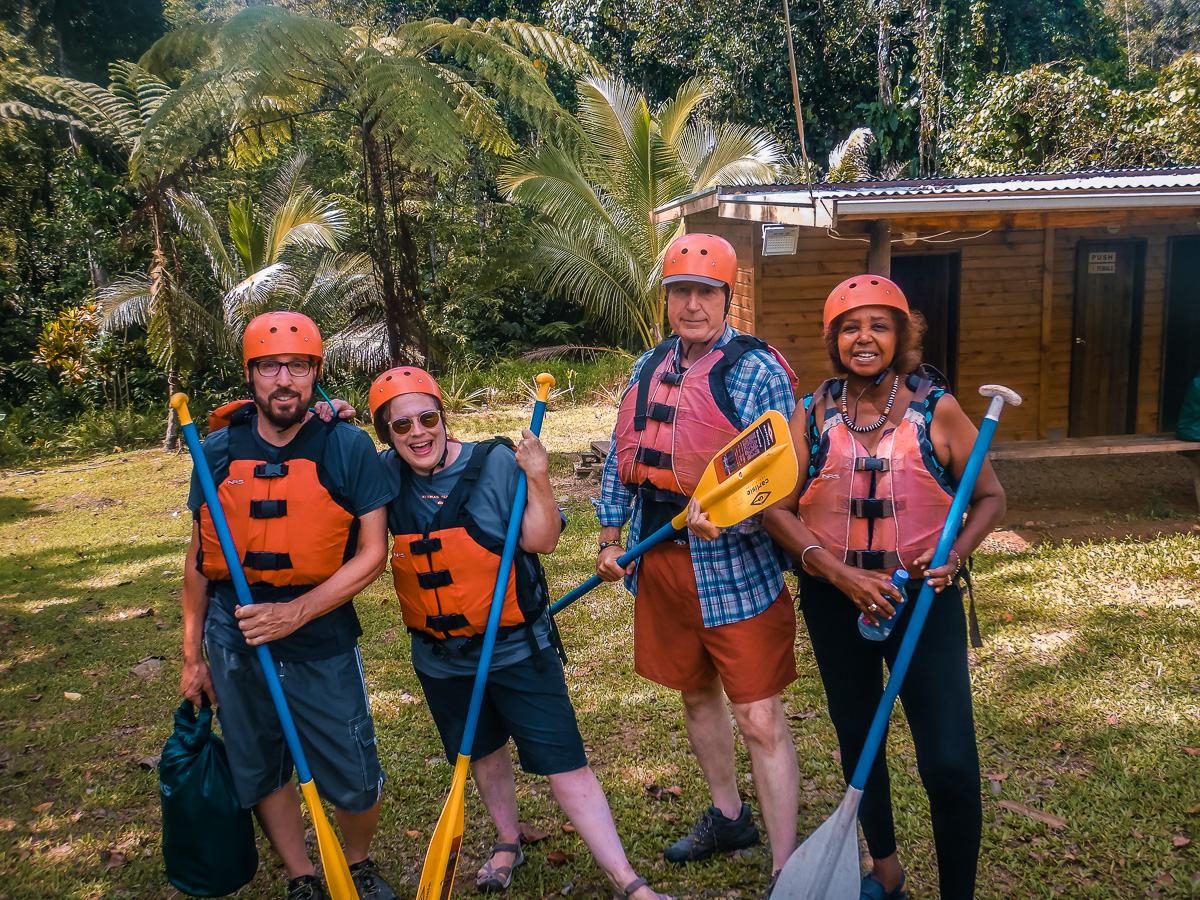 The men directing the rafts were muscular and knew the river like the back of their hand. First, we went through a breathtaking gorge with waterfalls. 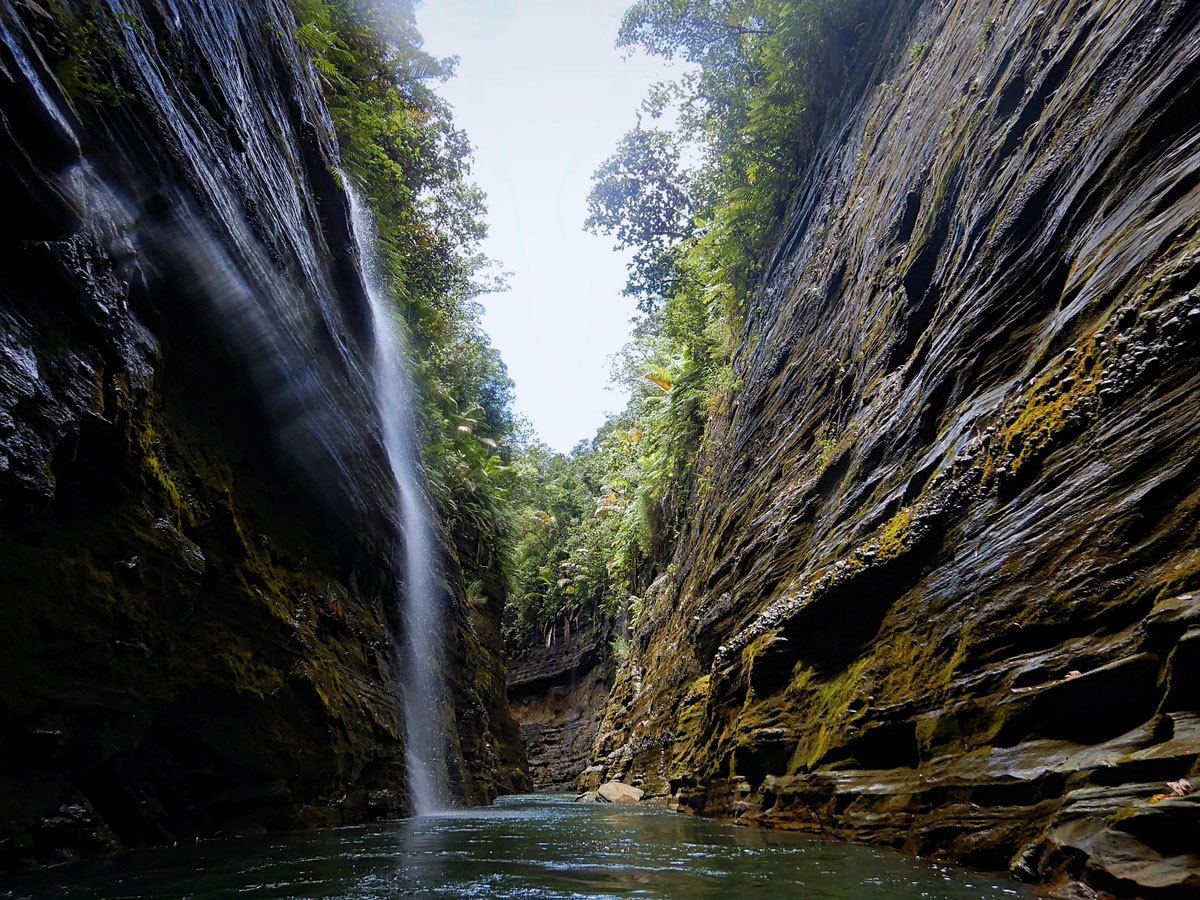 Then, there were a series of rapids that drenched us as we maneuvered over them. 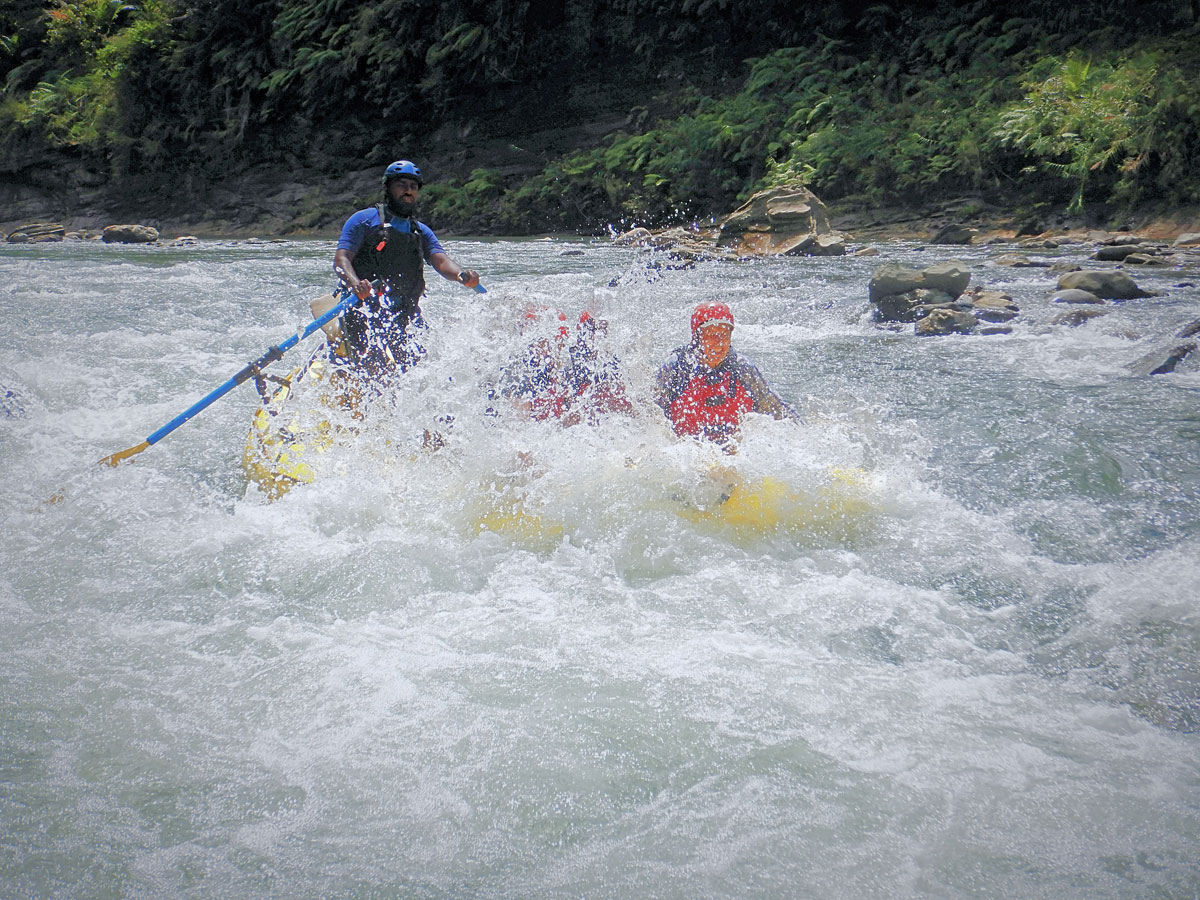 At one point, we stopped and stood under a freezing waterfall, which was exhilarating as long as you can stand it. 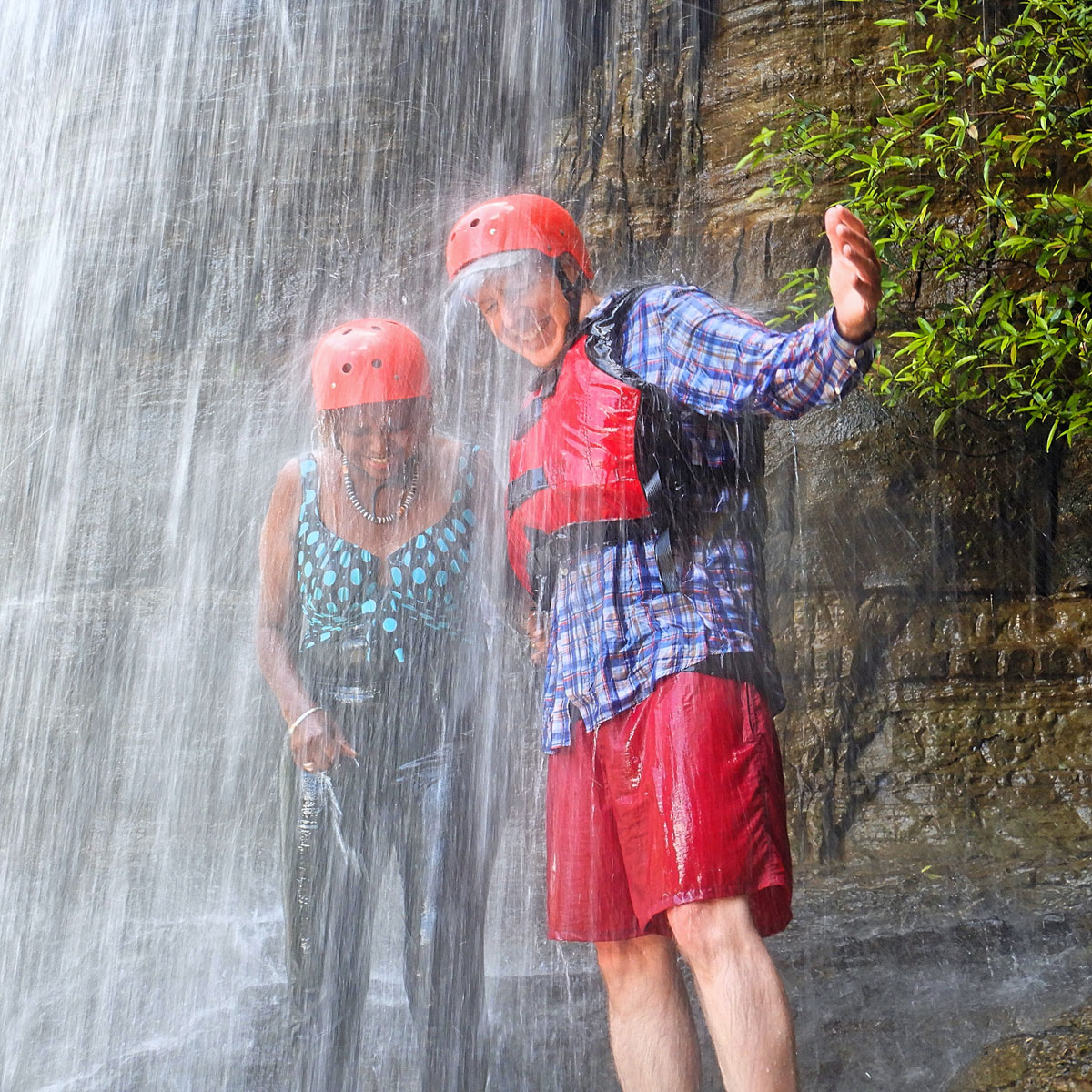 The rafting was about four hours, including a stop for an afternoon snack.

After we showered in the hotel, we went next door to the upscale Pearl Resort and ate at their Deli Restaurant.

Khadija and I decided to take a tour of Suva, as I like to see capital cities, while Peter and Caitlin went snorkeling close to the hotel. We again hired Focus on Fiji to take us for a tour, but with Nem as our driver.

On the way, we stopped at this botanical garden (the sign out front calls it Orchid Gardens) with traditional buildings and an excellent guided tour highlighting Fiji’s history in the last couple of centuries. It’s called an island even though it is no longer one. We started off viewing a traditional Fijian building. 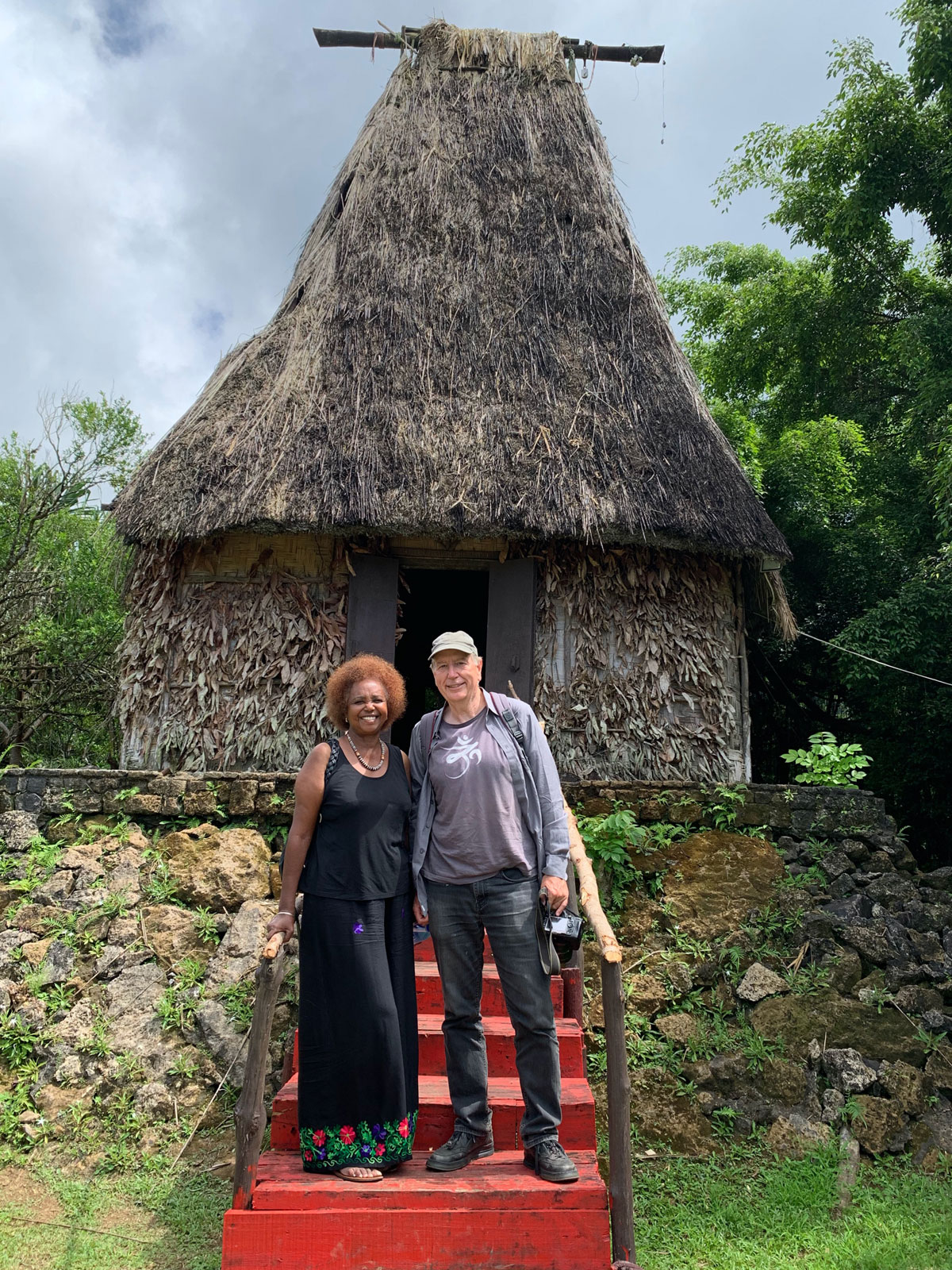 This type of building is generically known as a bure. It is made of stacked or tied-together wood and straw with packed-down dirt or clay floors covered with leaf mats. It has no windows but has an opening in the roof to let out smoke from cooking and allow hot air to rise.  As a result, the interior is dark and insulated, which keeps its cool in the hot climate. Some rural Fijians still live in these houses, and there are ones for tourists but with louvered windows, plumbing, and electricity.

The gardens were a marvelous collection of native plant species, including this orchid. 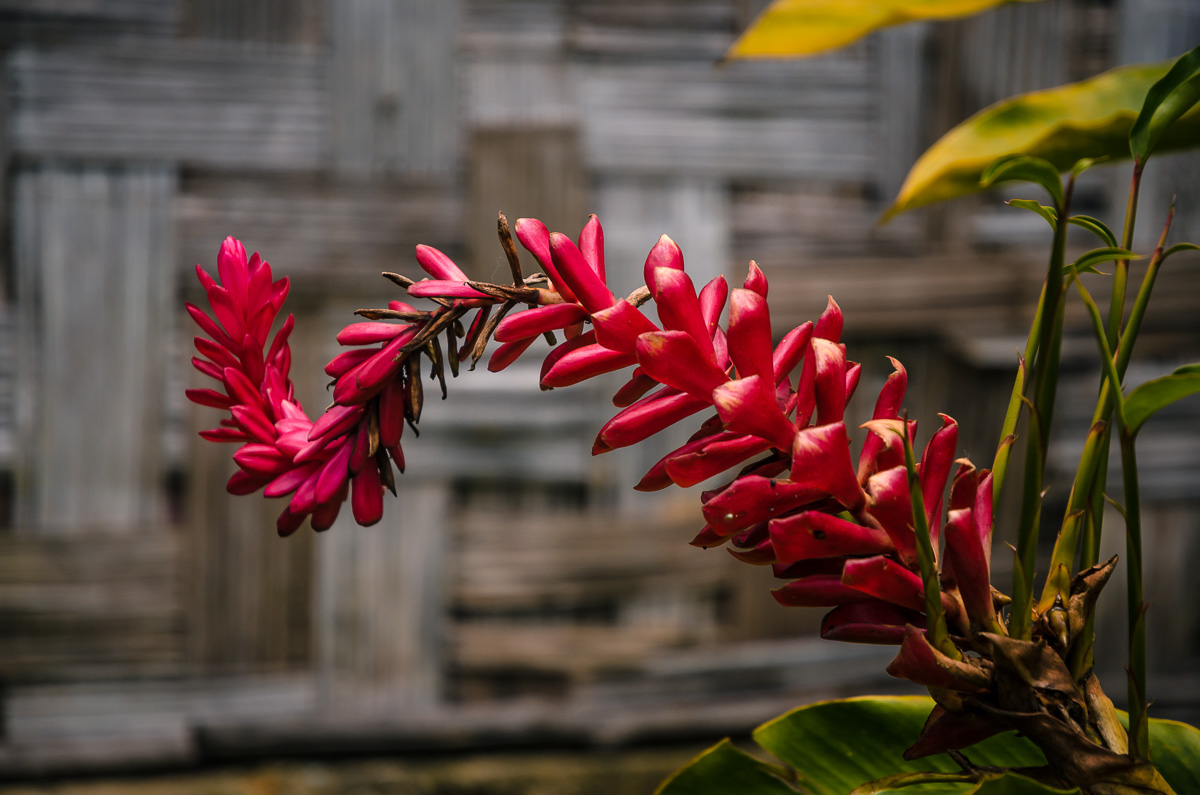 Europeans first came to the islands in the 17th century, with the British establishing a colony in 1874. They encountered fierce warriors and noted that cannibalism persisted in some places (there has been none for over 150 years as Christian missionaries suppressed it). The Centre has a room with traditional weapons and photos of warriors. 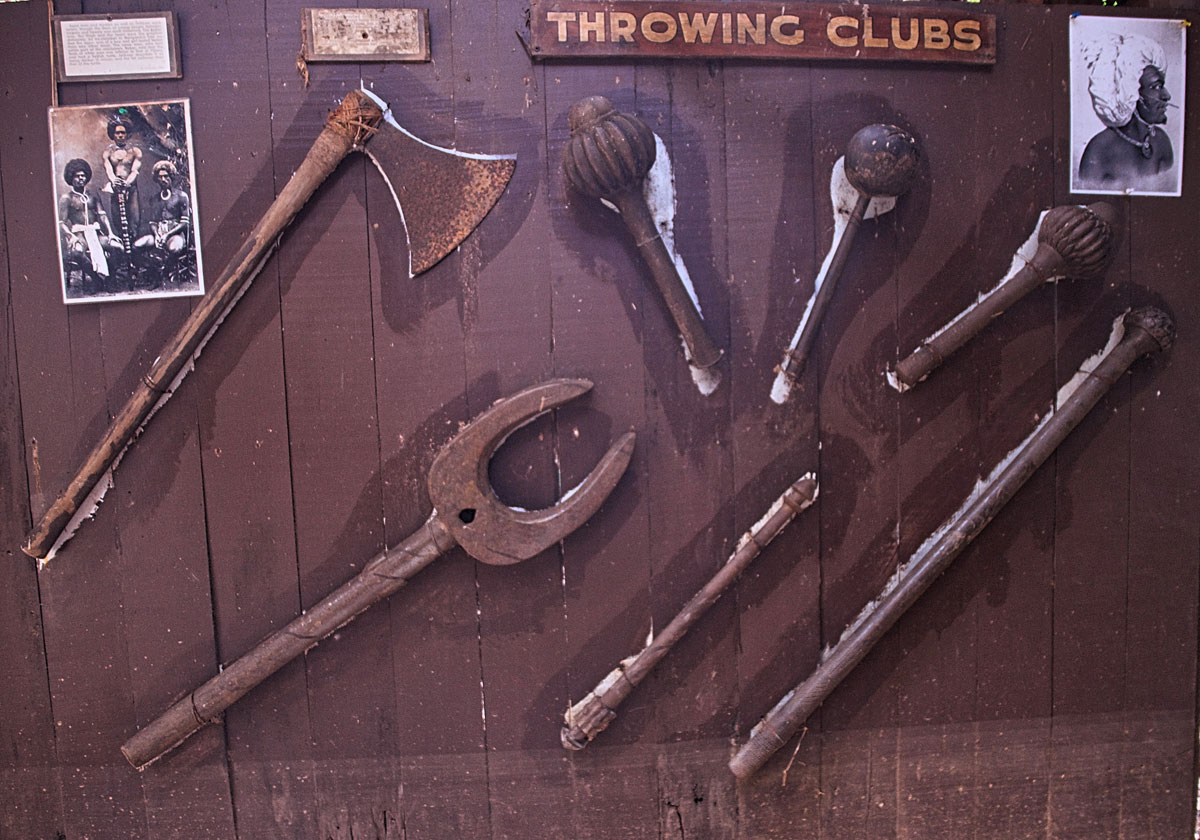 Michael, our excellent guide with perfect British diction, ended our visit, demonstrating how conch shells were used to send messages or make music.

Suva is a small capital city on a peninsula with a population of about 90,000, although it felt less than that. It’s definitely worth a half-day tour to learn about Fijian culture, history, and government. The places we went to were within walking distance, although it was helpful to have our driver Nem and his car. 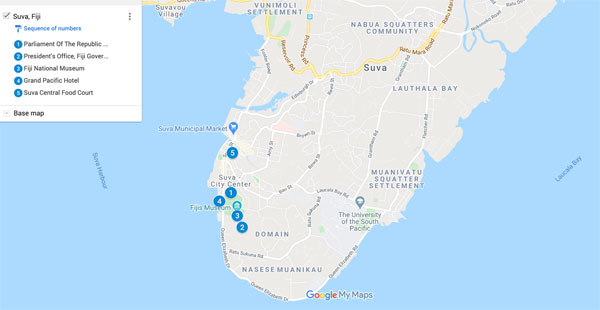 The Government Buildings in Suva include the Prime Minister’s office, the High Court, the Parliament, and several government ministries. I especially liked the clock tower and art deco architecture, which I didn’t expect to see in a Pacific island, but rather in Northern Europe or New York City. 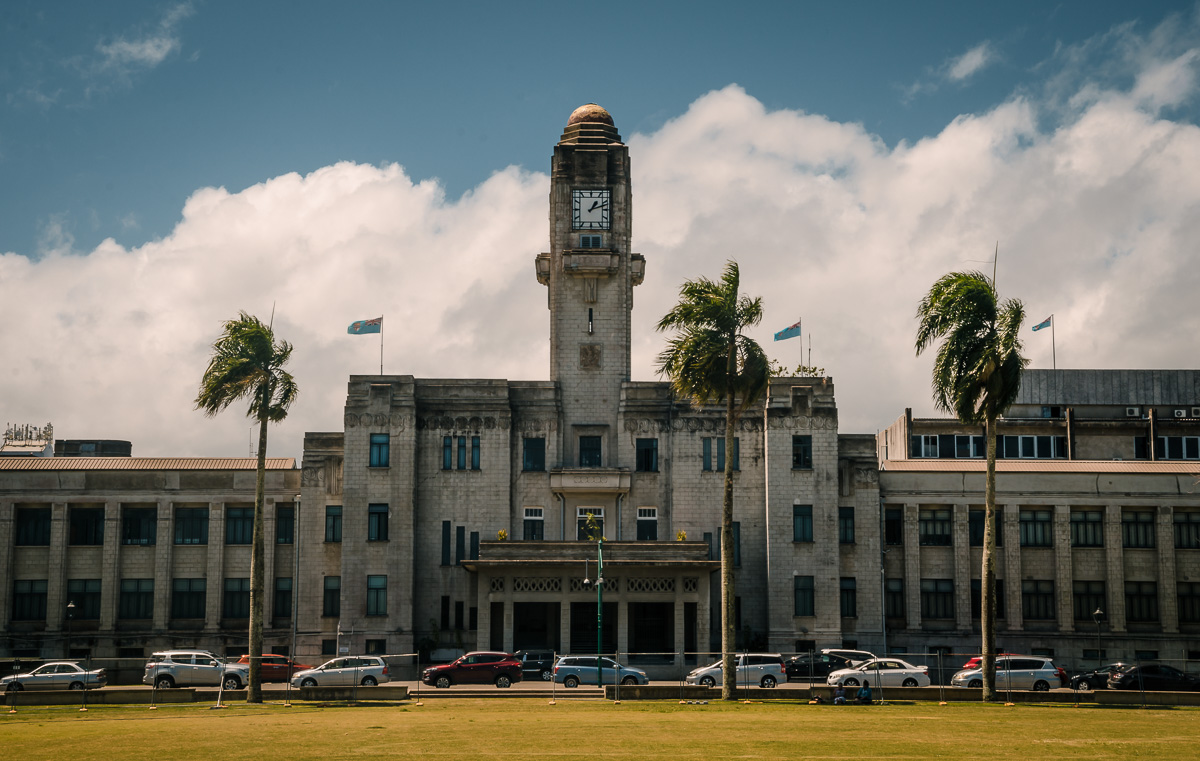 We were allowed to take a picture with the motionless and unblinking guard at the President’s House (also called the Government House). 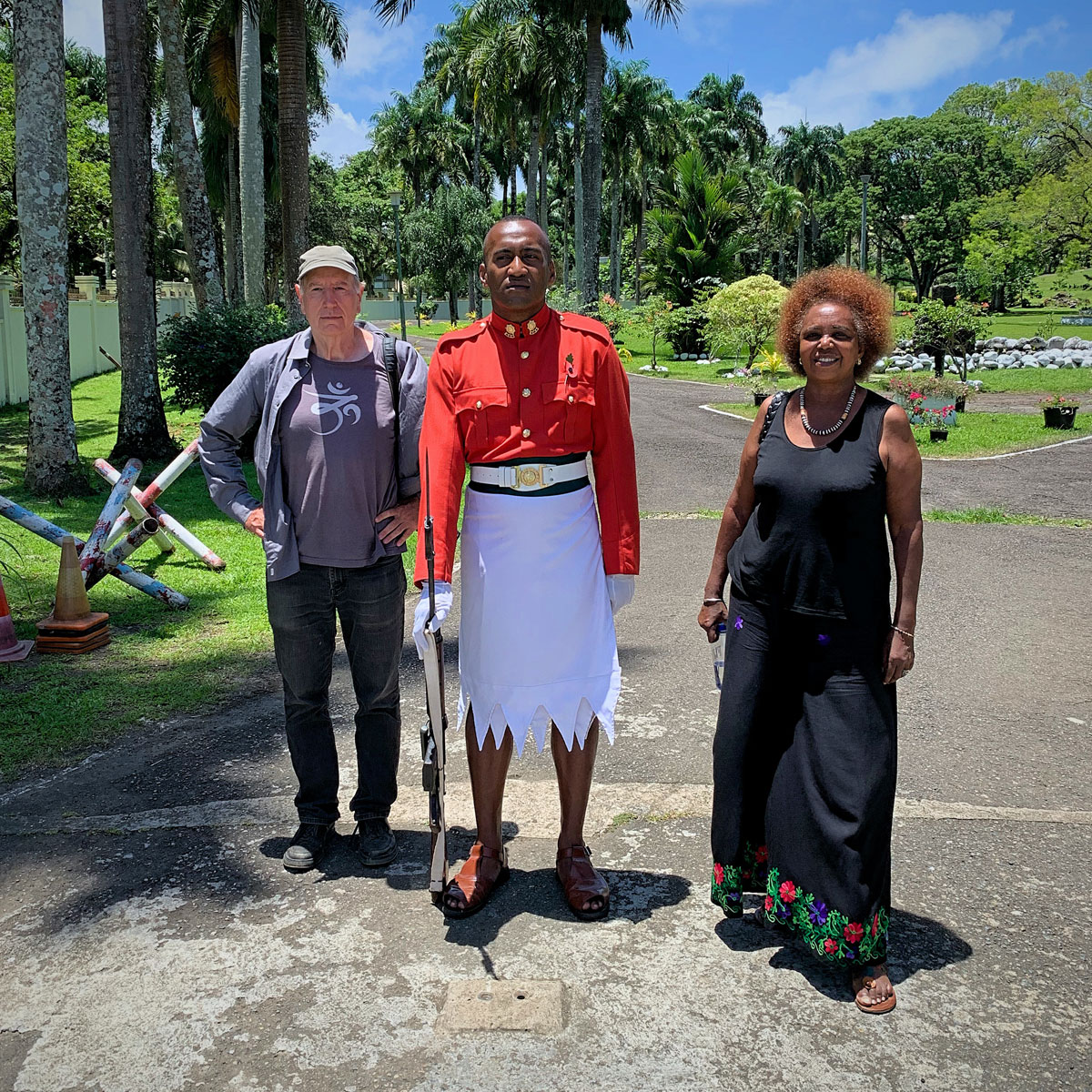 The building, not shown in the picture, is a Georgian-style mansion and the official residence of the President of Fiji.

At this point, we needed a break. We went to The Grand Pacific Hotel, a 5-star luxury hotel whose famous guests include Queen Elizabeth II and American novelist James Michener (whose first widely-read book was “Tales of the South Pacific”). We had a relaxing moment at the pool next to Suva Harbour. 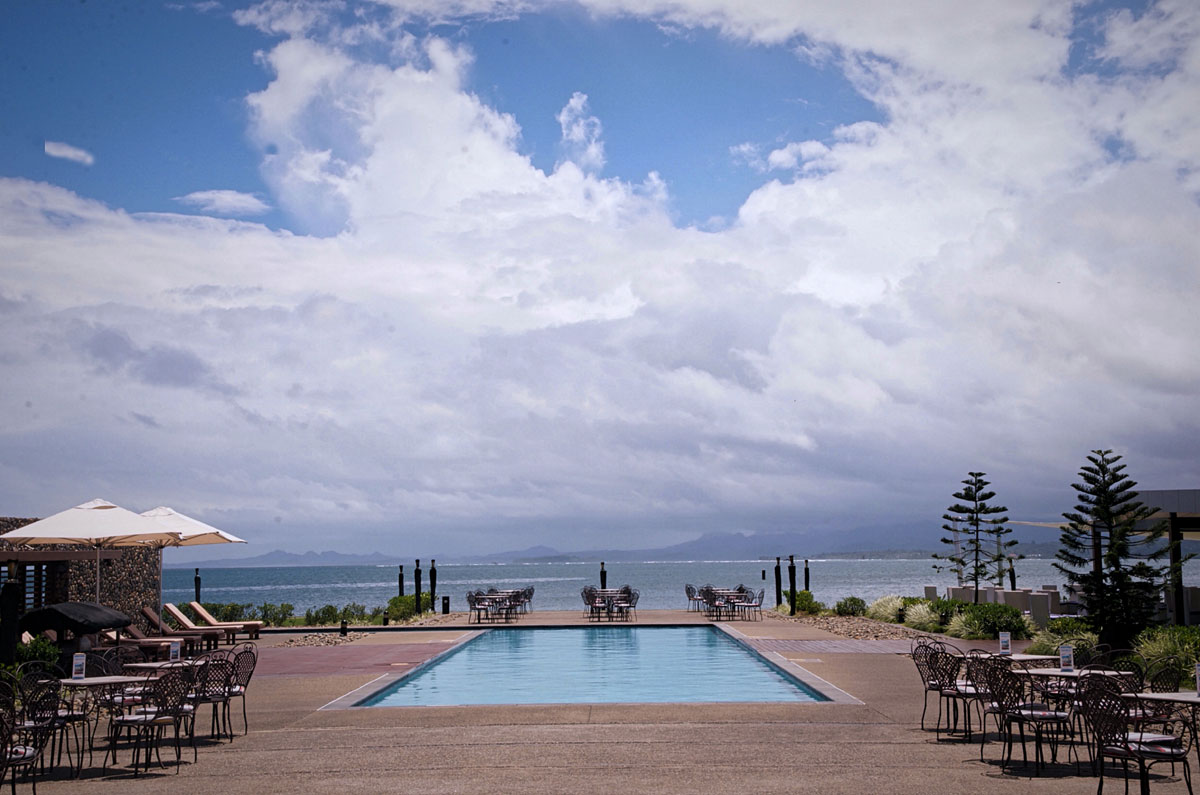 The compact Fiji Museum provides an excellent overview of Fiji’s cultural history in a low tech manner (nothing interactive or with audio accompaniment). Of interest was this house raft, known as a bilibili, which is made of bamboo and still used today to transport farm produce. 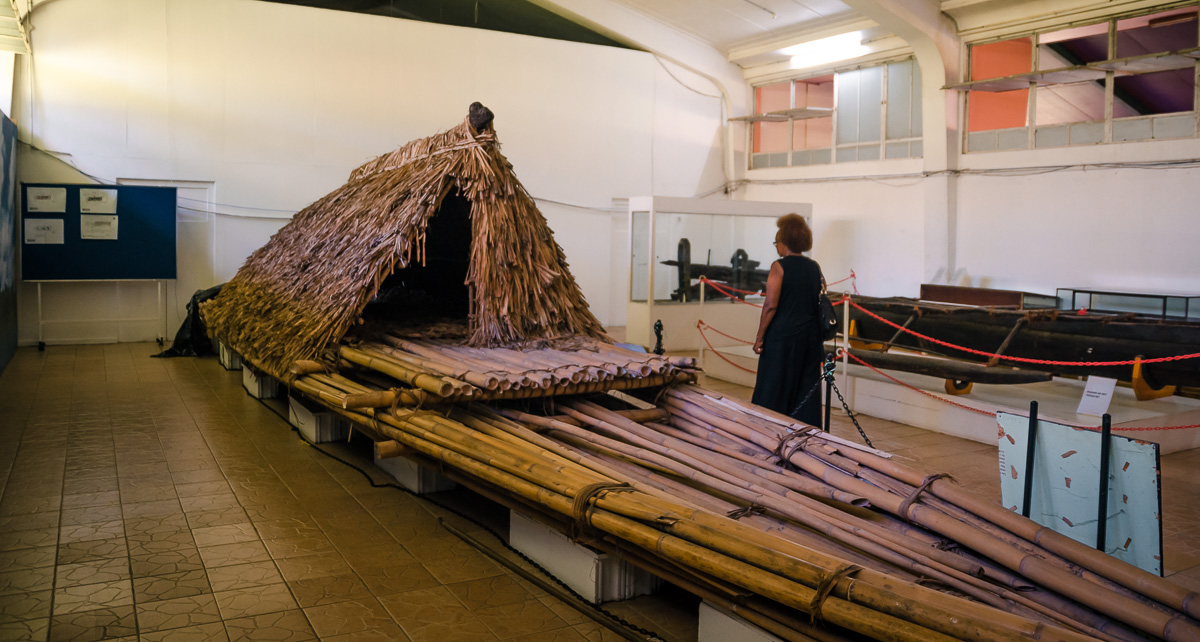 It is also home to an astonishing collection of archeological artifacts dating back 3,700 years. 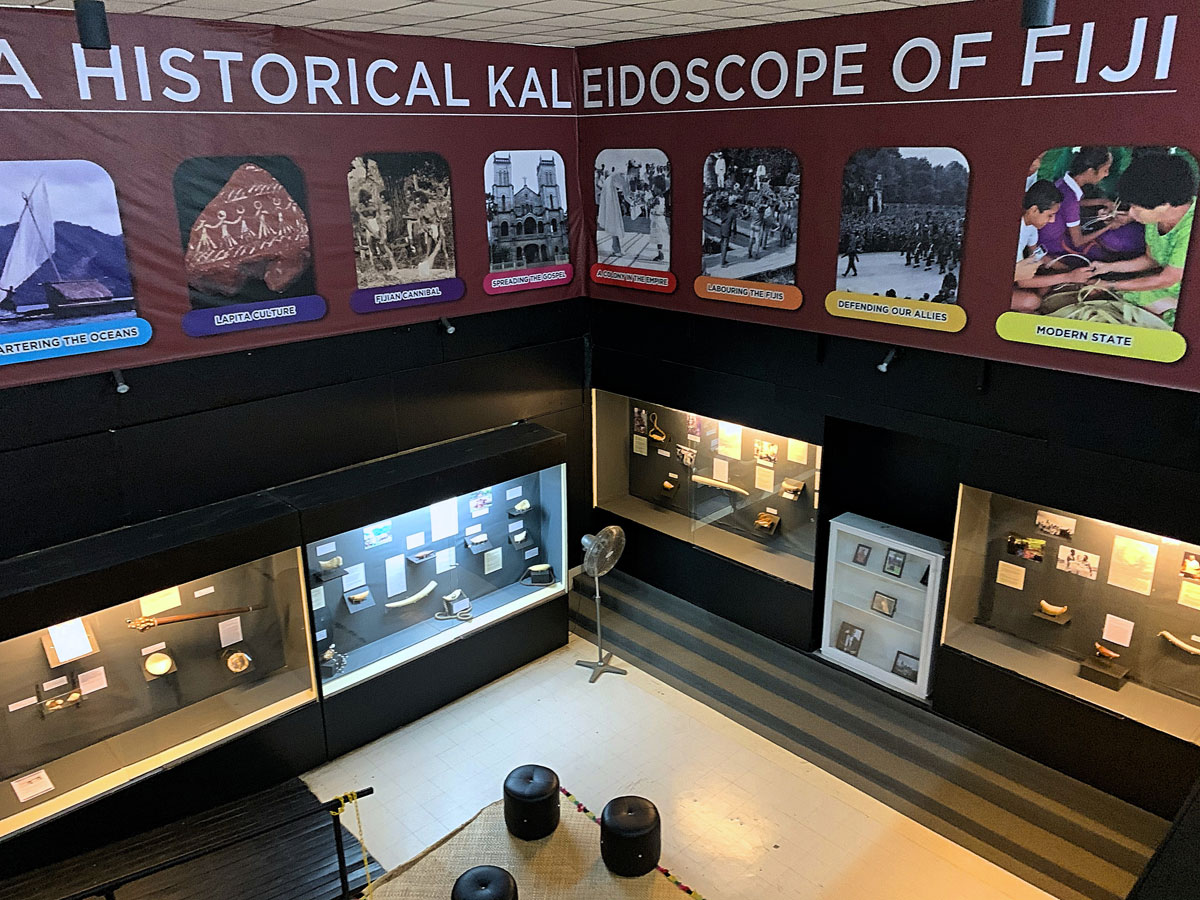 Suva’s Central Food Market is a lively, covered market in the heart of the capital that offers cheap yet quality produce. 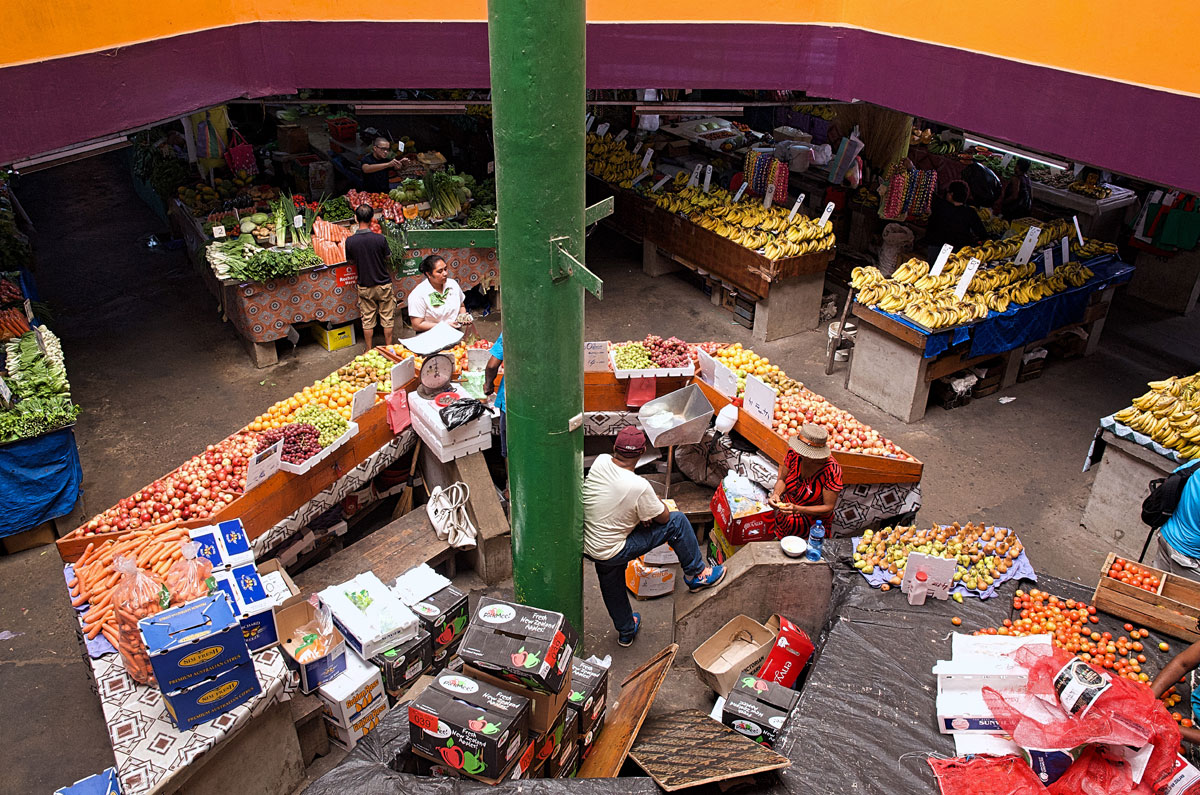 The vendors reflected the ethnic diversity of Fiji, with native Fijians… 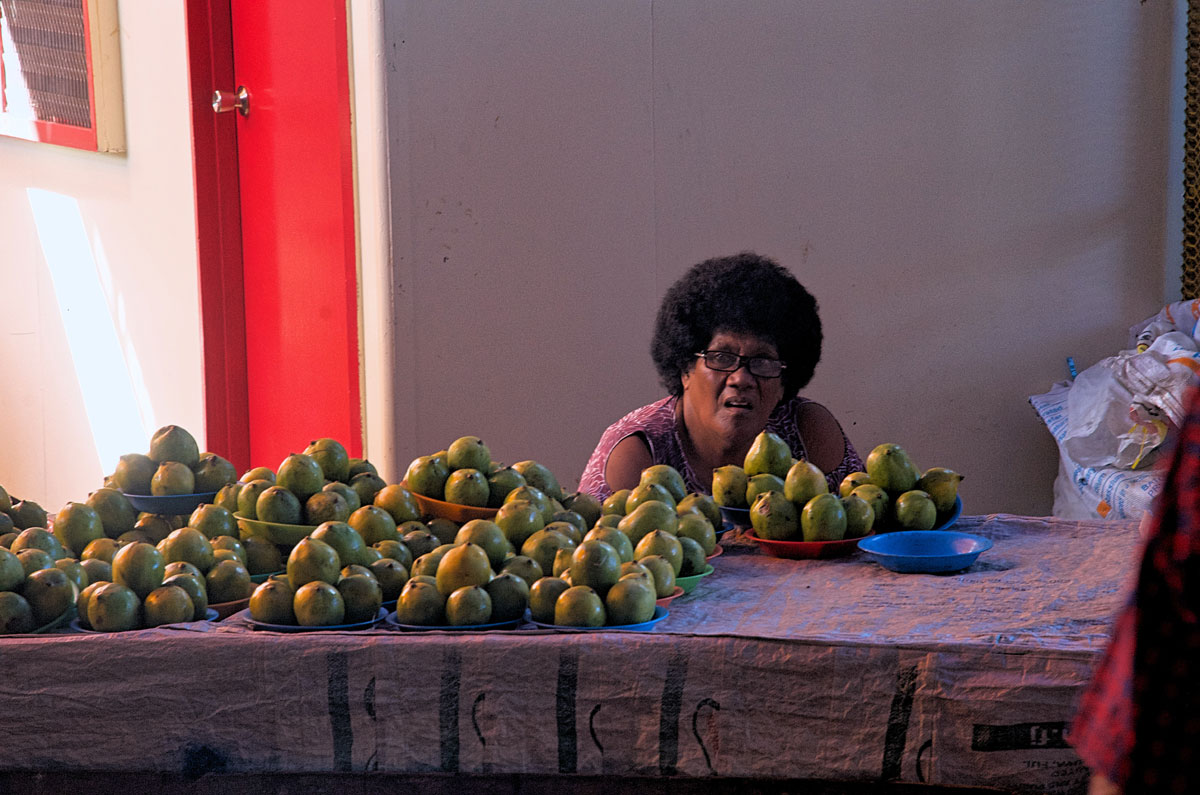 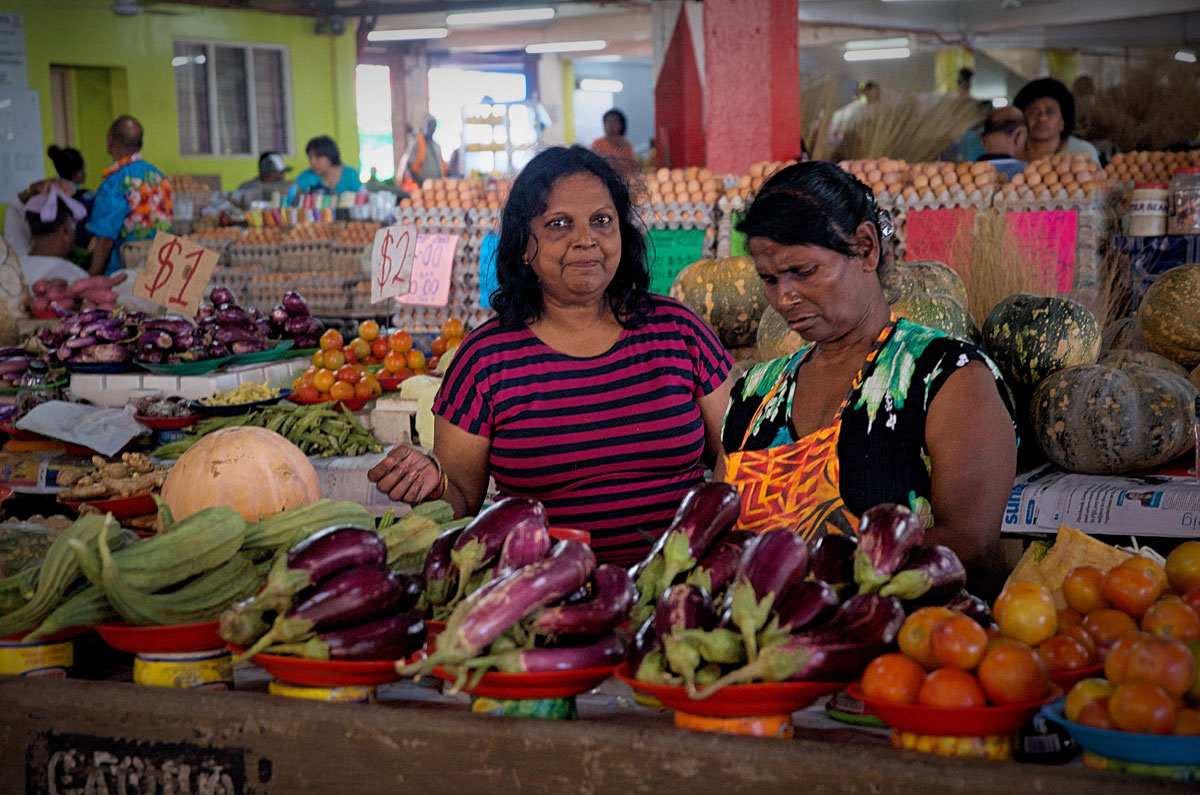 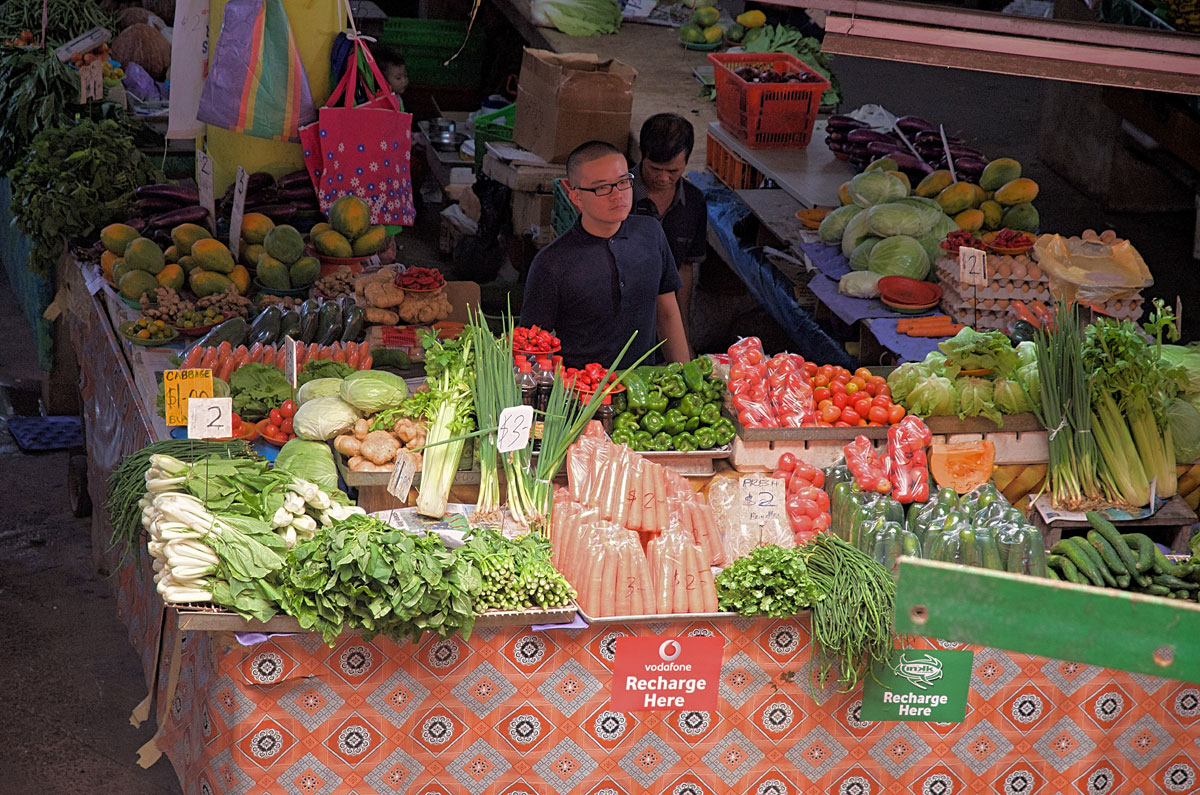 When most travelers think of Fiji, they think of beach resorts and water sports. 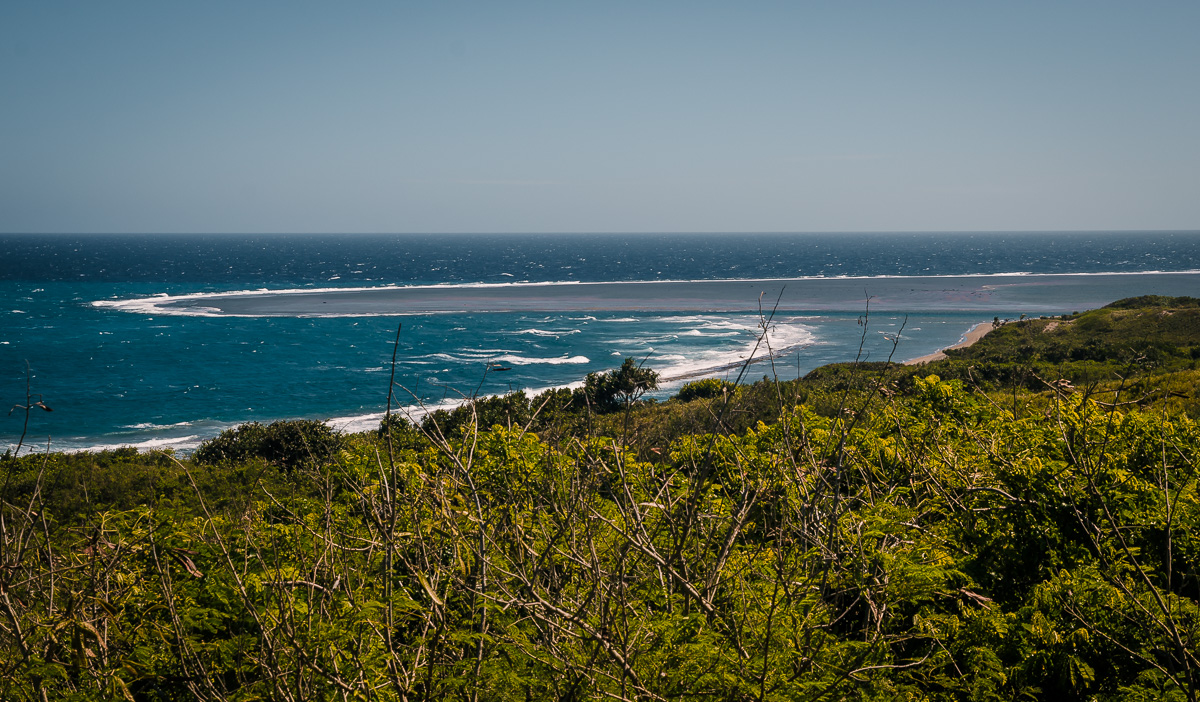 However, my memories will be of the villages and the warm people I met. 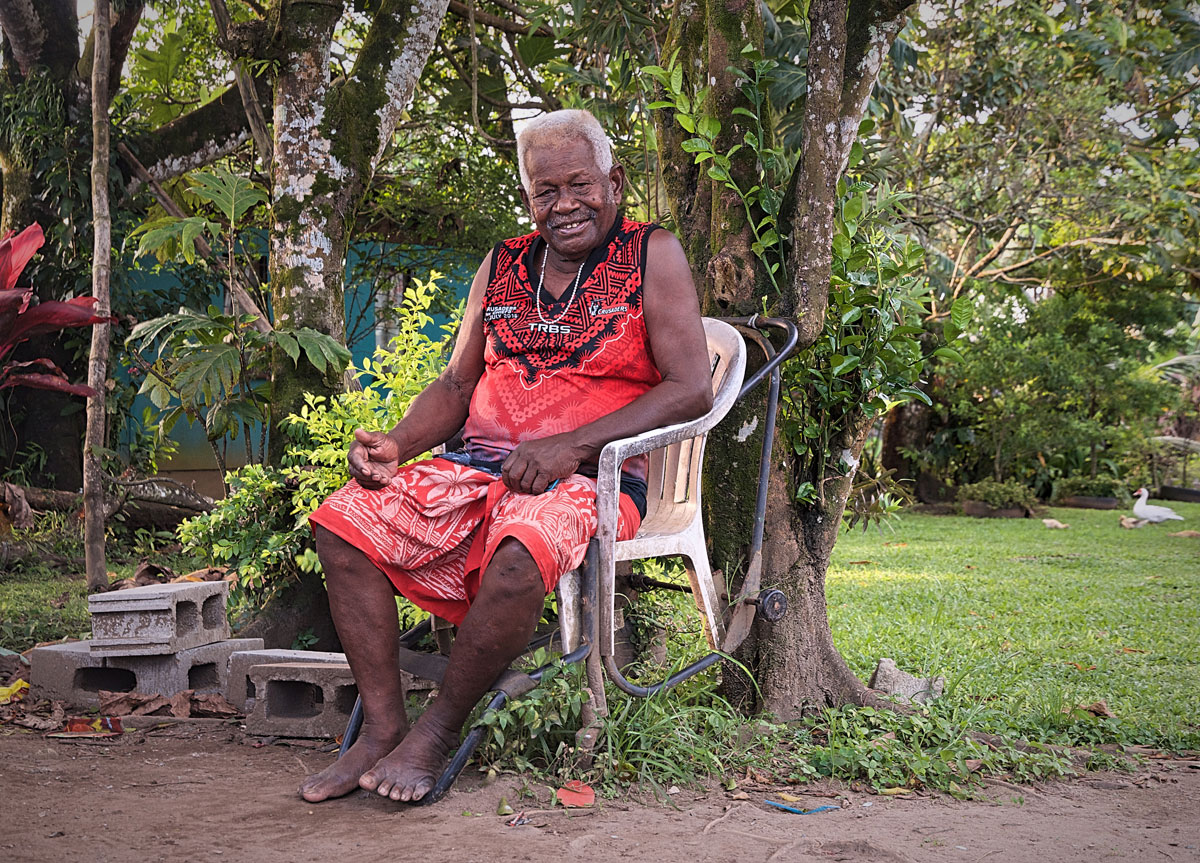 If you explore Fiji, don’t miss the magic Fijians have to offer.