Zagreb – The Capital City That Shouldn’t Be Missed 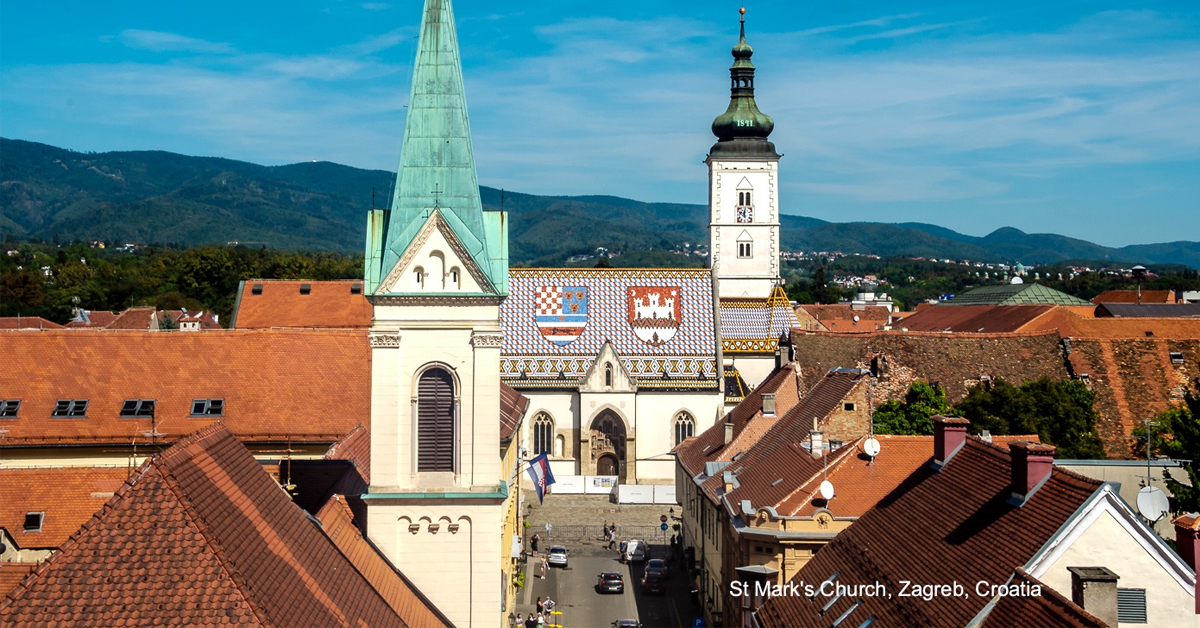 Most tourists go to Croatia for the Dalmatian coast and the walled city of Dubrovnik. They may go through Zagreb as a transit stop and even spend a day there, but it’s often overlooked. The city is a wonderful combination of historical monuments, high-quality museums, rows of parks, cold war relics, and innumerable cafes, restaurants, and bakeries. Zagreb, unlike other European historic cities, is not divided into tourist and resident areas. As such, it’s easy to interact with locals while soaking up the long and complicated history of the country and city.

Why We Went to Zagreb

In August and September 2021, my wife Khadija and I went on a  five-week drive through Eastern Europe and visited many of the great cities of the region. We had never been to Croatia, so we decided we had to go. We planned on spending three days in Zagreb but liked it so much we spent an extra day.

Bottom line is that Zagreb is safe. Here, as everywhere you travel, employ basic safety precautions and use common sense to avoid problems.

In comparison to other major European cities, Zagreb is less expensive, as Croatia’s currency is the kuna and not the euro (which inevitably brings higher prices). Kuna is a pine marten, a weasel-like creature, whose fur was used for payments back in the day. If you’re there for more than a day, it’s advisable to exchange 50 to 100 dollars or euros for kunas for places that do not accept credit cards or foreign currencies.

Where to Stay in Zagreb

It’s probably best to stay within walking distance of Ban Jelačić Square which is close to most attractions. We stayed at the boutique Manda Heritage Hotel, which was a very good value for the money. The staff was very helpful, especially Jelena who had worked for a spell in the hospitality industry in New Jersey.

How to Get Around Zagreb

Here’s a map of some of Zagreb’s sites worth visiting but note there are many others.

Where to Eat in Zagreb

Zagreb is full of relaxing cafes for coffee and snacks, as well as friendly restaurants for meals and drinks.

If you hear “Let’s meet by the clock” in New York City, it refers to Grand Central Station. The Zagreb equivalent is “Let’s meet under the clock” referring to Ban Jelačíć Square. 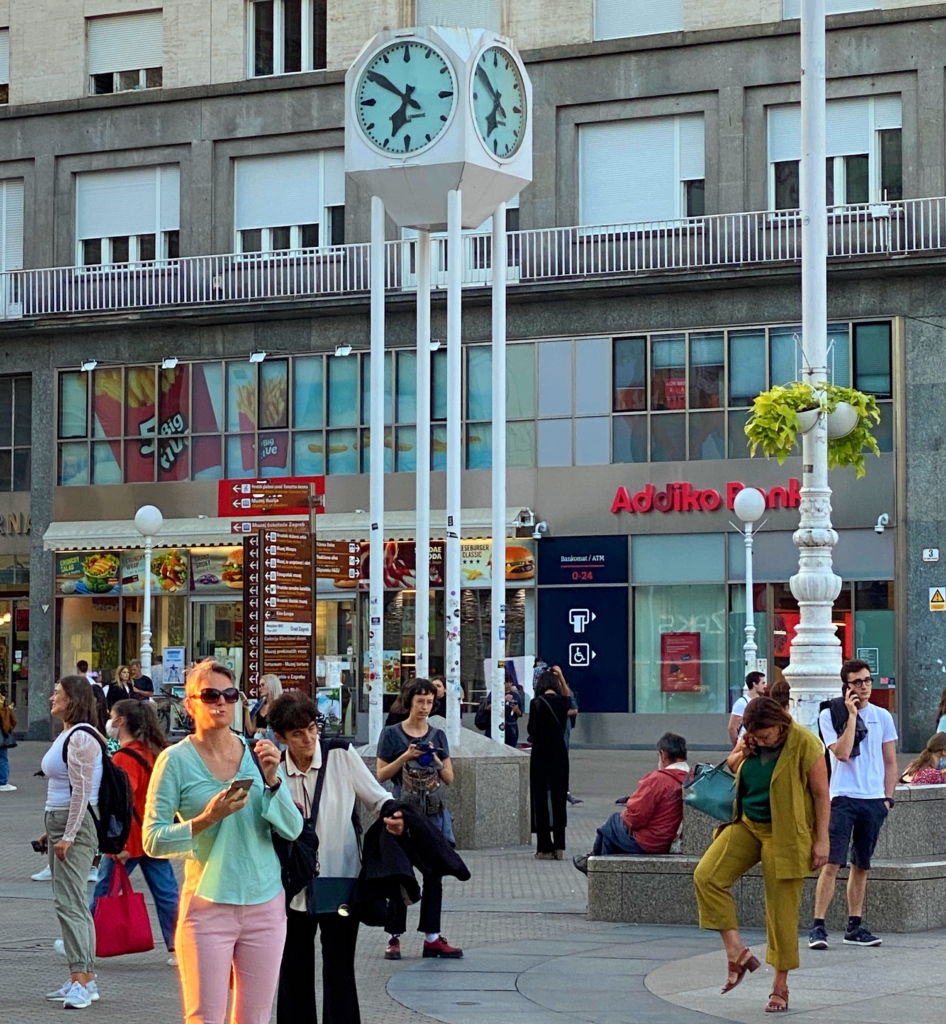 This square (actually a rectangle) is the starting point for most tourists. 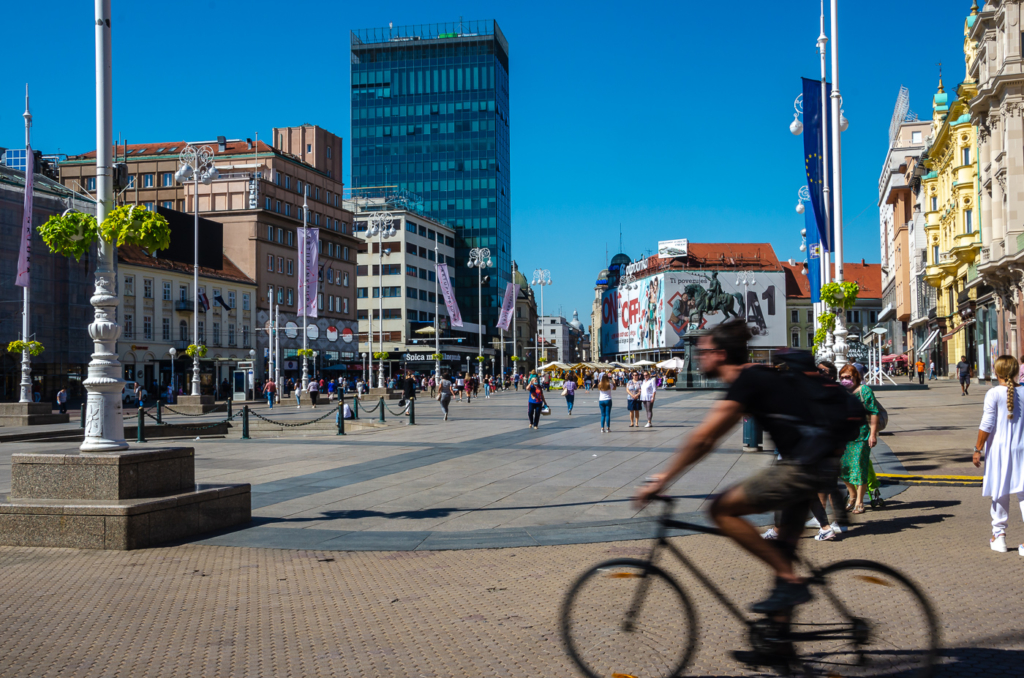 It’s named after 19th-century ruler, Ban Josip Jelačić. Ban means Governor, which he was of the Croatia state within the Habsburg Empire. In 1848, Jelačić led a Croatian military force to put down secessionists in Hungary. He thought his help would give Croatia greater autonomy, but even though it didn’t, Jelačić has remained a revered figure. During Tito’s Yugoslavia, his equestrian statue was removed but in 1991 it was returned to the square. The original position north toward Hungary was changed to the south, towards the Serbian occupied town of Knin during the Croatian War of Independence. 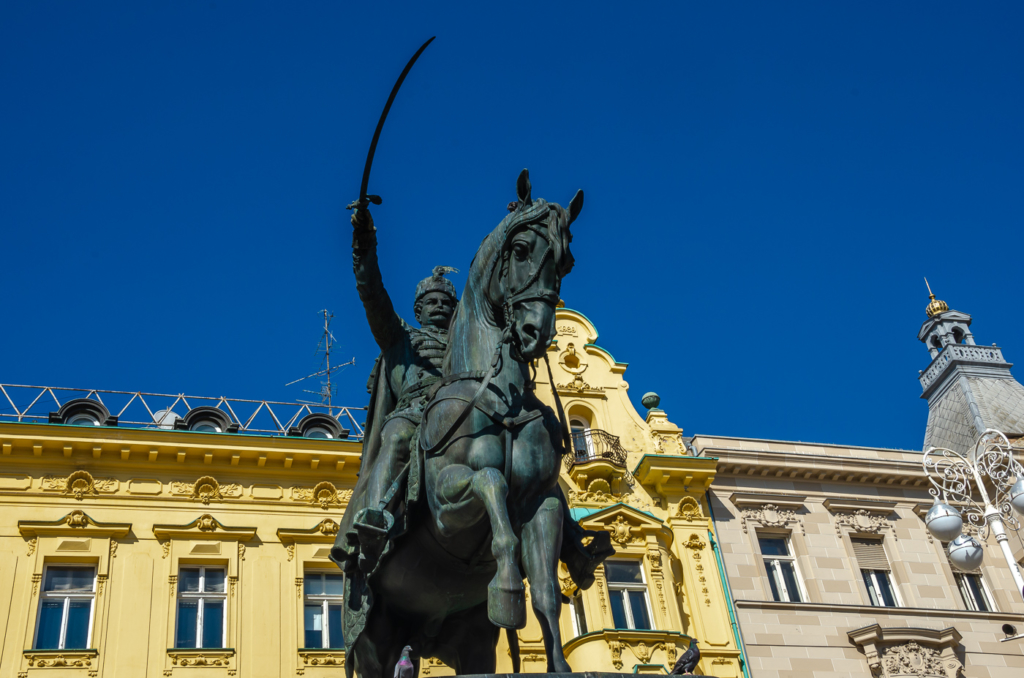 A whimsical activity is taking the Zagreb Funicular (Uspinjača), one of the shortest in the world at 66 m / 215 ft. The ride is about a minute and costs less than a dollar. 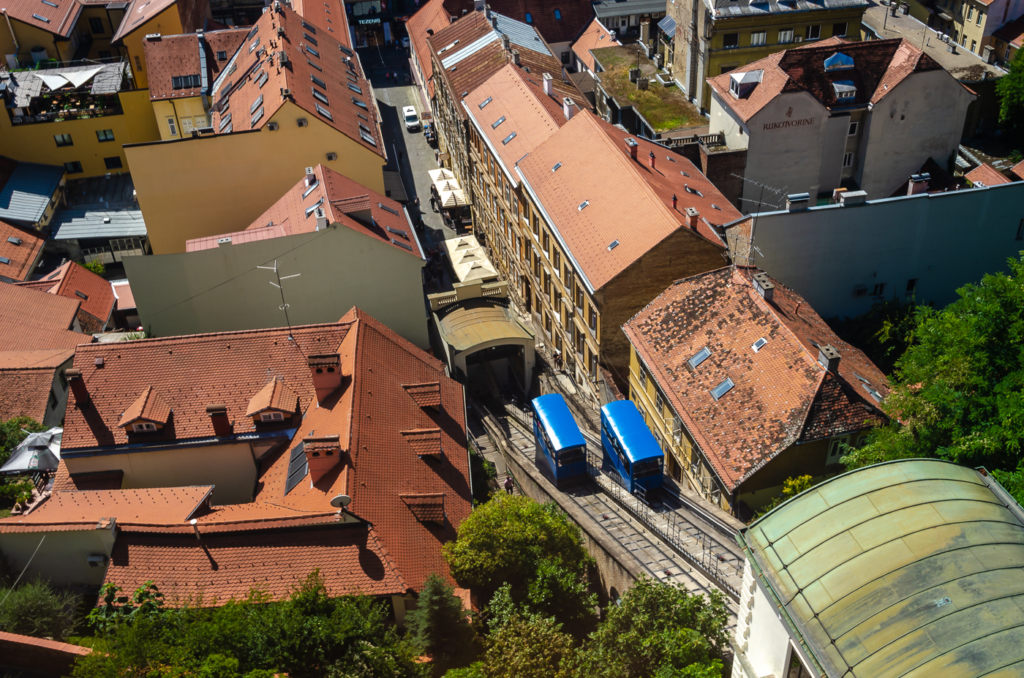 Constructed in the 1890s, it was the first public transportation in Zagreb, initially powered by steam but changed to electric in the 1930s. Besides being fun, it takes you up the hill to see St. Mark’s Church and other attractions.

At the top of the hill, there’s the Lotrščak tower, where you can get a 360° view of Zagreb. 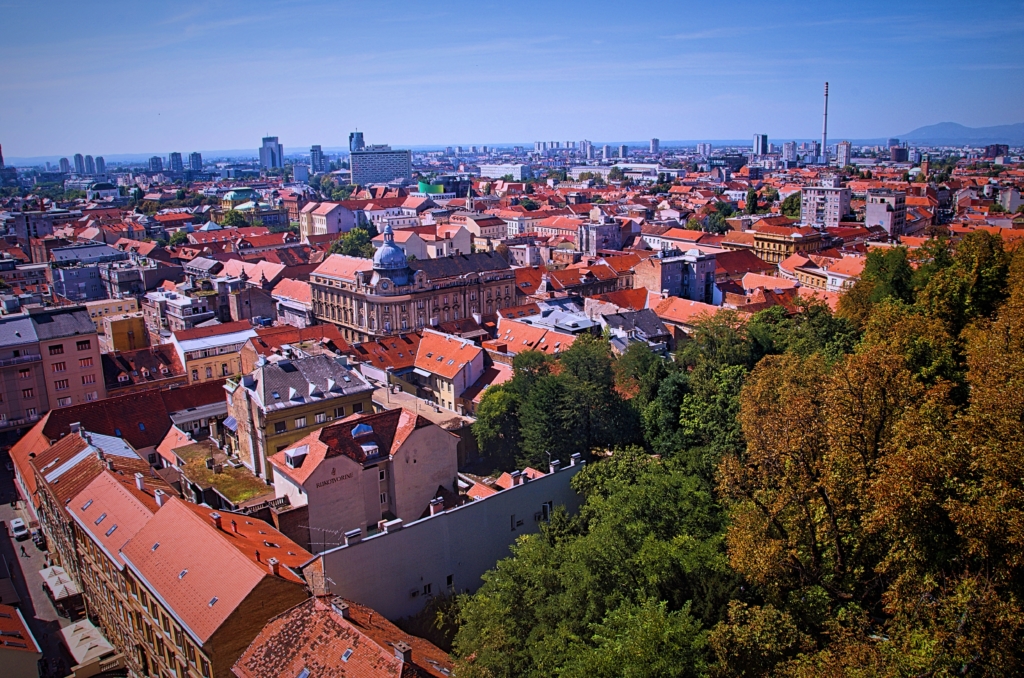 I found St Mark’s Church to be the most striking building in Zagreb. It started out as a Romanesque Church in the 1200s and over the centuries evolved with many gothic features such as the doorways. Here’s a view from the Lotrščak tower. 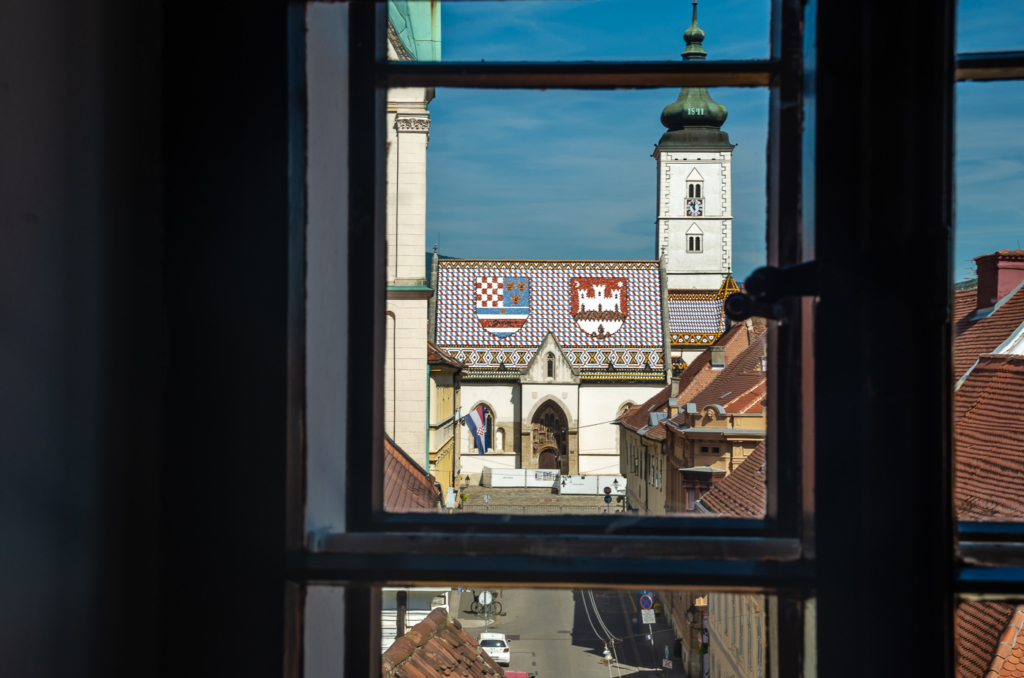 The distinctive roof tiles have two coats of arms representing Zagreb (a white castle on red background) and the Triune Kingdom of Croatia, Slavonia, and Dalmatia. The latter was an inspiration for three regions under the Austro-Hungarian Empire which never coalesced but now forms most of present-day Croatia. Next to St. Mark’s are important national government buildings including the Banski Dvori, which houses the leadership of the executive branch of the government. 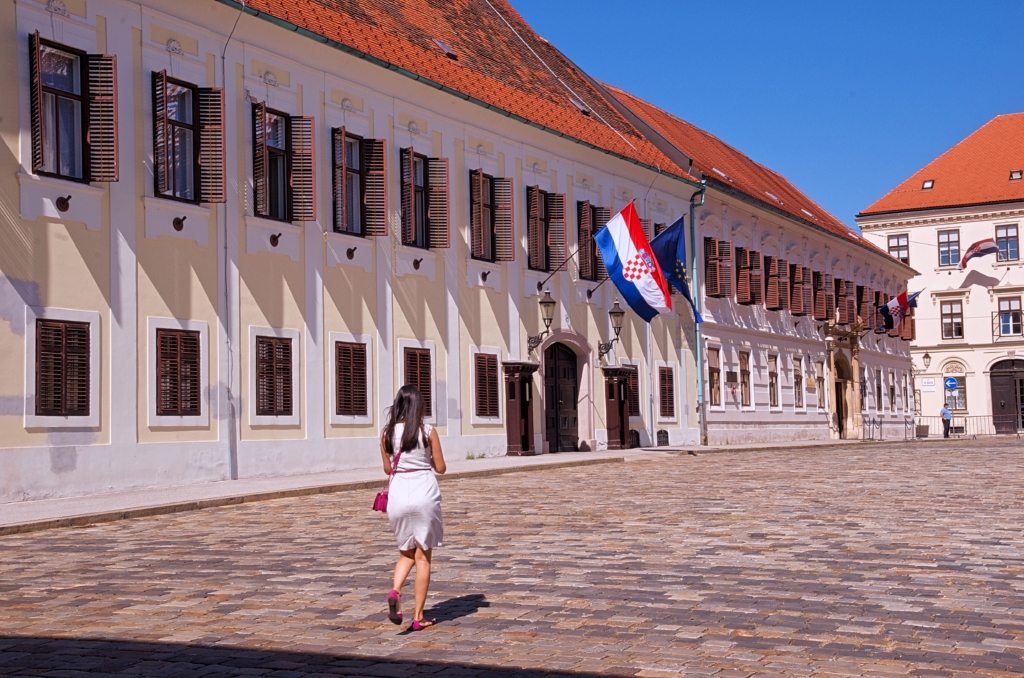 Not far from St. Mark’s is the informative Zagreb City Museum, founded in 1907, and located in the former Convent of the Poor Clares. The permanent exhibitions span from prehistoric times to the present day. You can easily spend two or three hours there. I particularly liked this portal with figures of the apostles surrounding Jesus. Peter is always the one with the keys. He supposedly went to Rome where he set up the first Christian community. The Popes are the successors of Peter and the keys to heaven and hell, which gives them the powers of absolution and ex-communication. 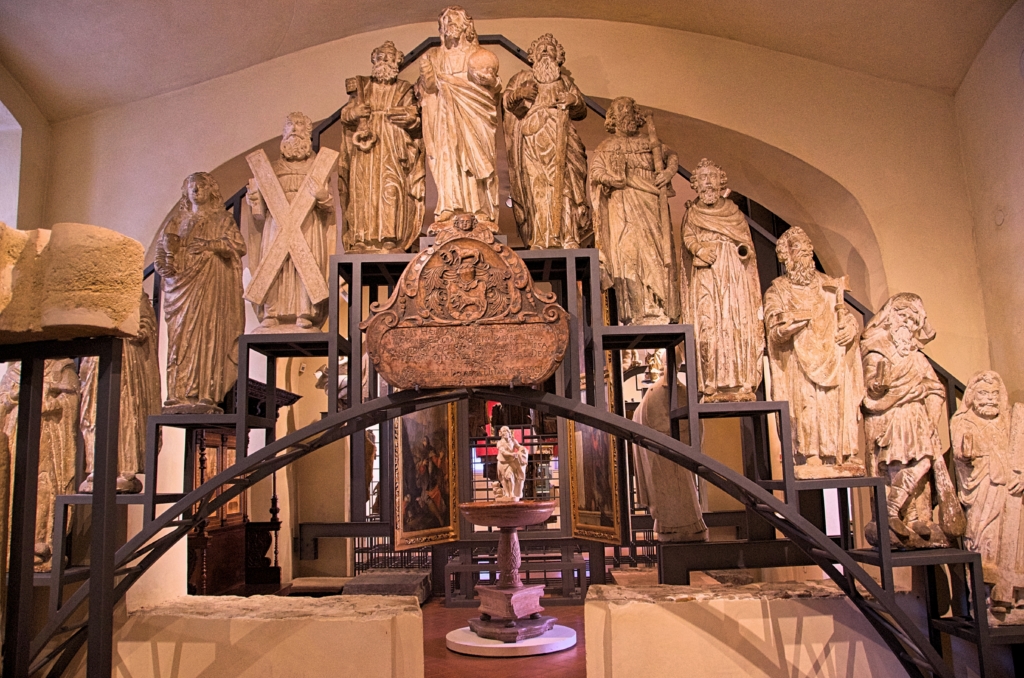 This is probably the busiest street in Zagreb with restaurants, bars and cafes, frequented by tourists and locals alike. 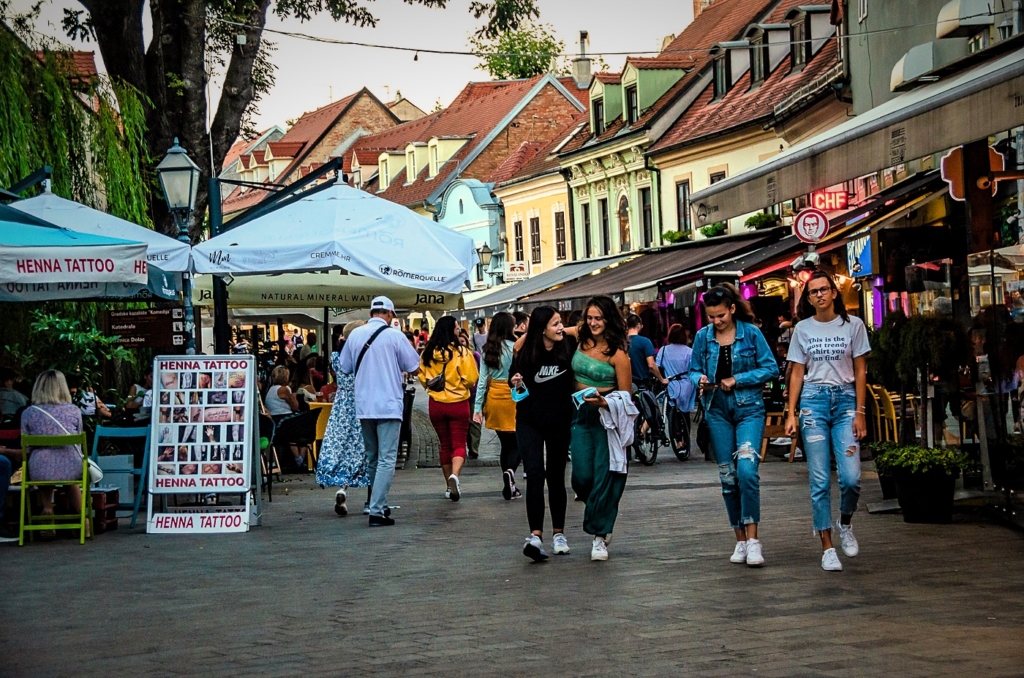 Tkalčićeva Street is right off Ban Jelačíć Square and once was a stream separating the towns of Kaptol and Gradec, which merged to make Zagreb. The name Zagreb is derived from a verb meaning “to scoop” or “to dig”. It was most likely referring to retrieving water from a well. You no longer see watermills and public baths on Tkalčićeva Street, but often street and even window musicians.

There has been a cathedral on this site for almost a millennium and the current structure is the tallest building in Zagreb. In March 2020, the worst earthquake since 1880 caused the top of the south spire to break off and damage many other buildings. As this was the beginning of Covid restrictions, fewer people were on the streets and only sixteen were reported injured throughout the city. Later the north spire was removed for repairs. Here’s what the cathedral looks like now with the Holy Mary Column and Fountain in front. 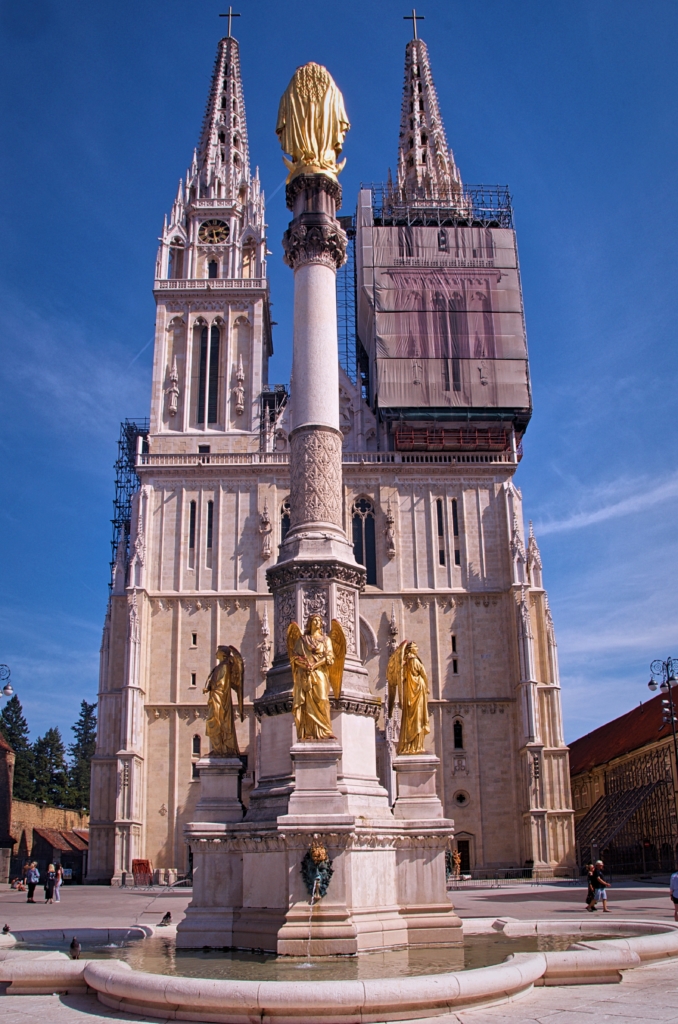 The disconnected spires sit between the cathedral and a remaining part of a fortification wall. 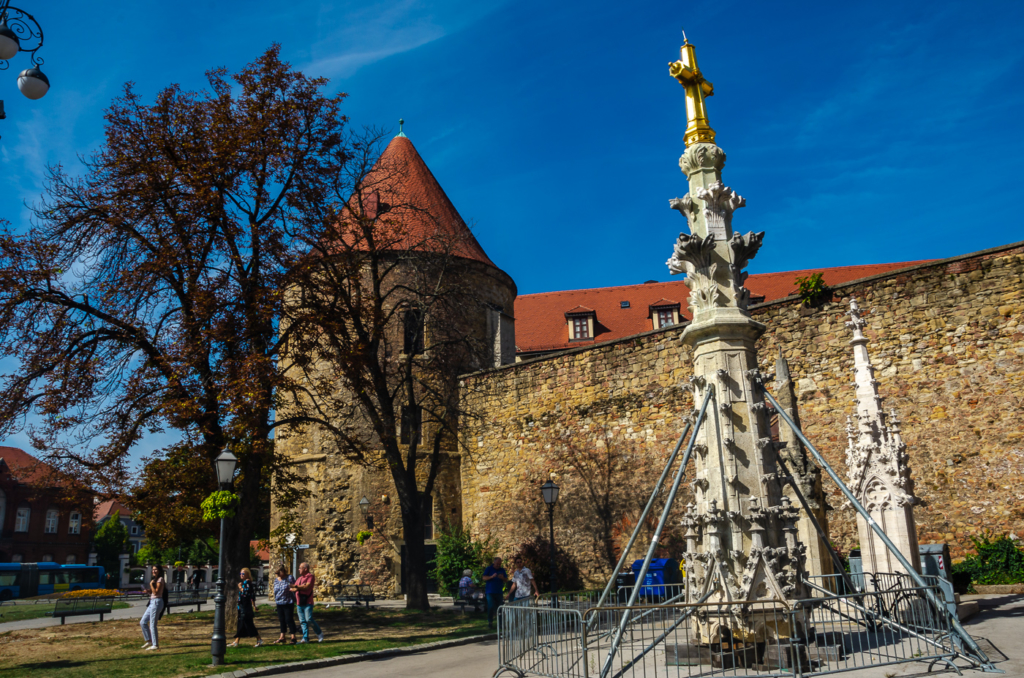 This is the rotund statue of Stjepan Radić on Petrinjska Street, who was a consequential figure in Croatian history. 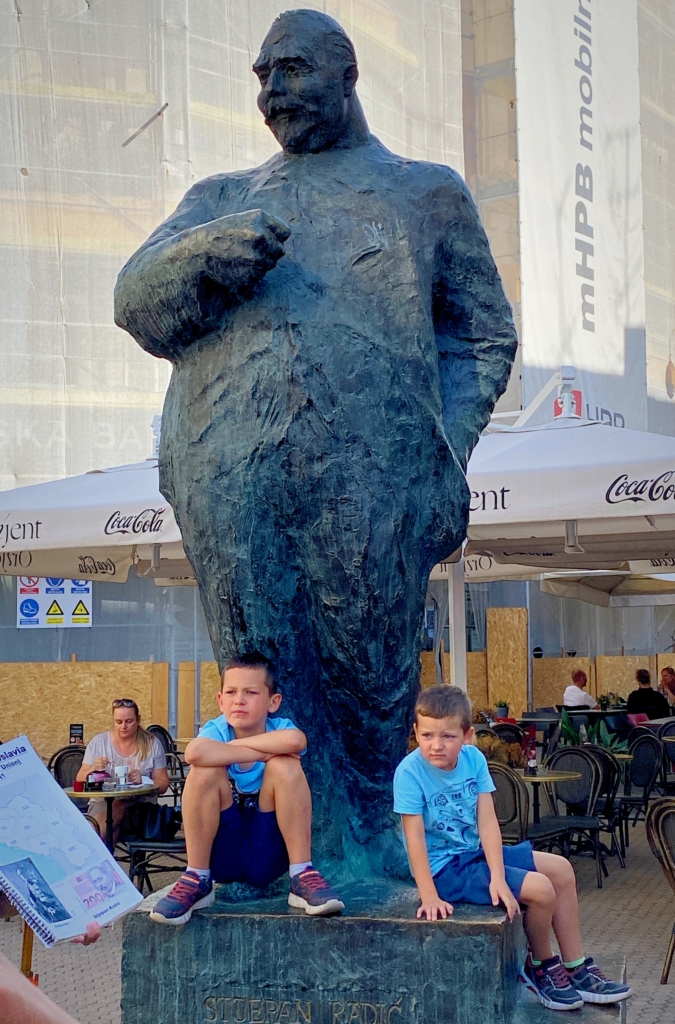 He was the leader of the Croatian Peasant Party in the Kingdom of Serbs, Croats, and Slovenes (later named Kingdom of Yugoslavia, then the Socialist Federal Republic of Yugoslavia). He was a persistent advocate of the recognition of Croatian autonomy, a stance that landed him in jail more than once. In 1927, he found a Serbian partner, and together they demanded a federalist reorganization of Yugoslavia. During a heated parliamentary debate on June 20, 1928, Radić was mortally shot. This statue is one small reminder of the tumultuous history of Croatia. His portrait is on the Croatian 200 kuna banknote.

Between 1242 and 1266, Gradec built thick, stone walls around the city. A few sections of the walls remain, as well as the Stone Gate. In 1731, the gate was severely damaged and only one painting of Virgin Mary with baby Jesus remained intact. Afterwards, a chapel was constructed inside the Stone Gate guarding the painting. Ever since, people have come to say prayers believing they will be answered. 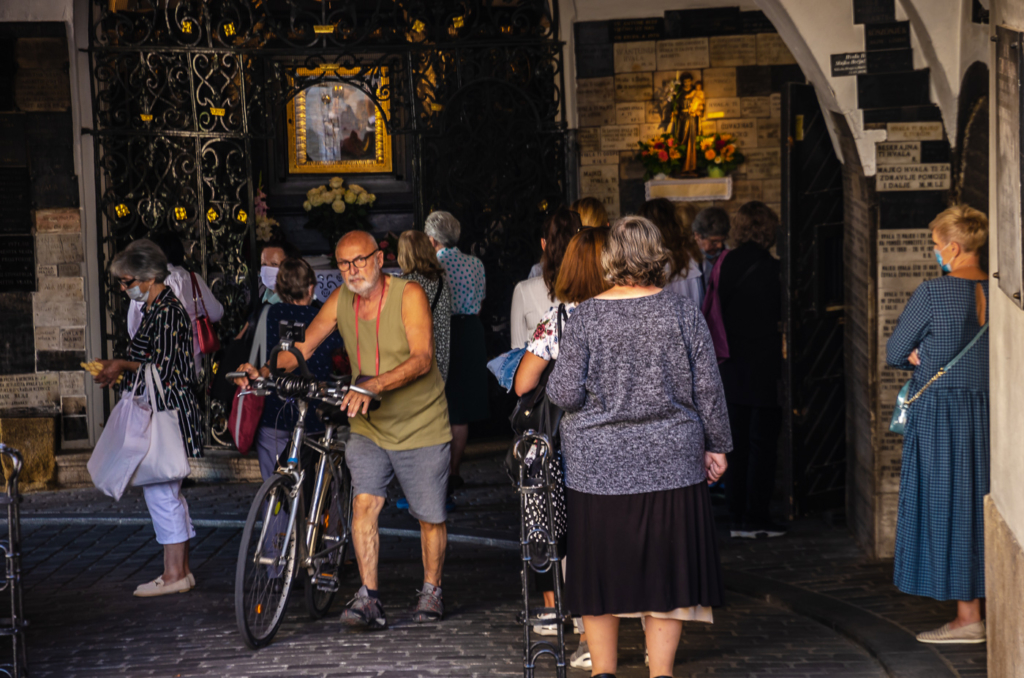 Don’t miss one of the most charming alleys anywhere! Off Radićeva Street, two blocks from Tkalčićeva Street is a painted red carpet, a quasi-psychedelic space created by street artist Boris Bare, leading to the stairs going to the top of the hill. 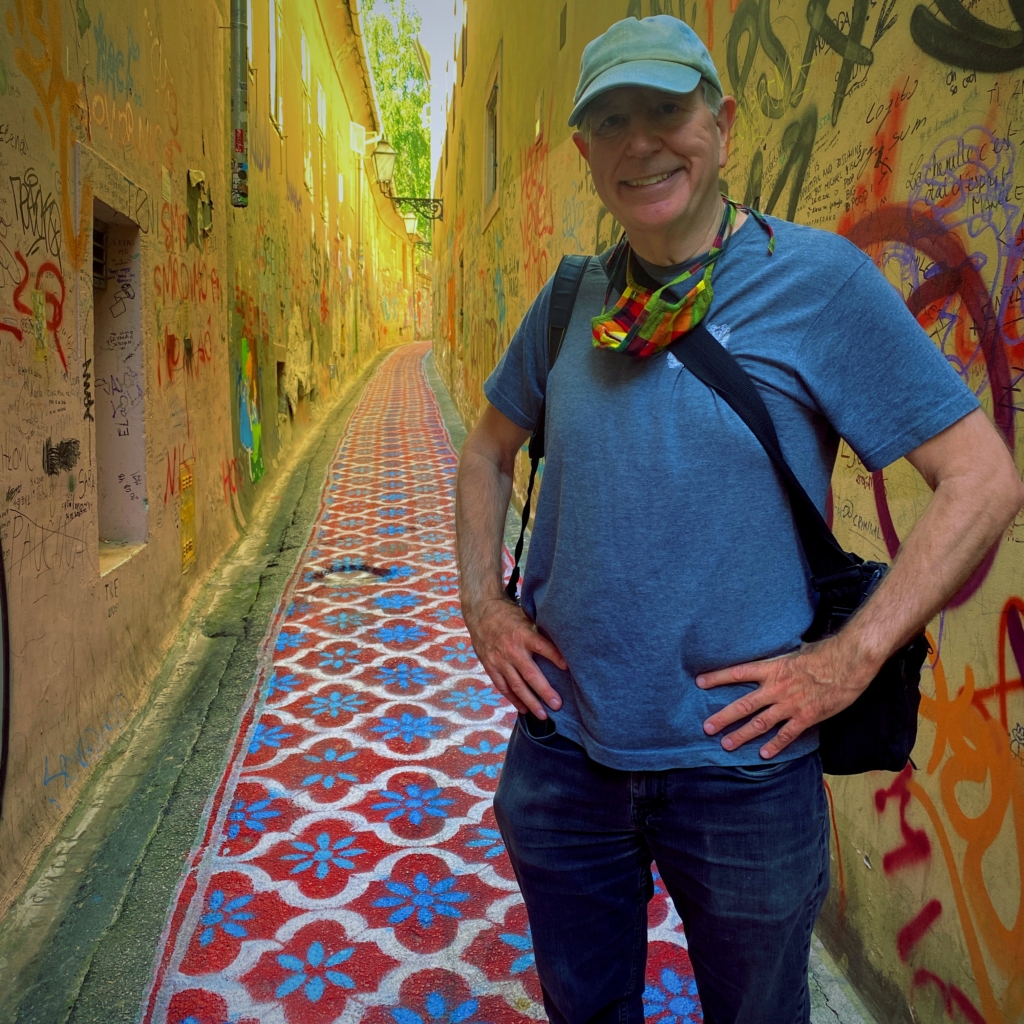 Zagreb has an extensive network of underground tunnels; all are closed to the public except for Grič which was recently opened. 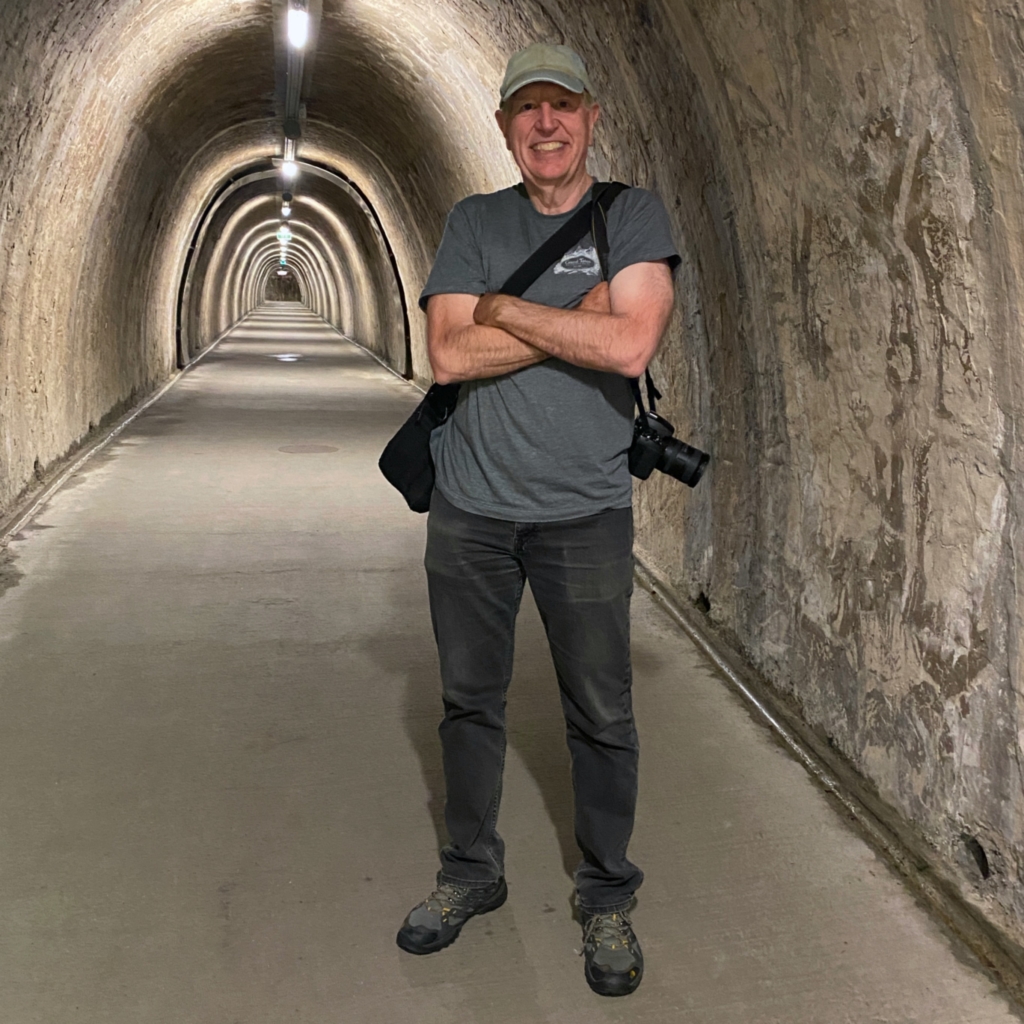 They were built as air raid shelters in WWII and became very useful during a series of bombings in 1995 during the Croatian War of Independence. In the 1990s, they were popular for raves, sometimes for thousands of partiers.

A visitor should definitely stroll through all or part of the Green Horseshoe, conceived by architect and urban planner Milan Lenuci (1849 – 1924). This is a park system of seven squares aligned on three straight lines, forming a “U” shape. The closest to Ban Jelačić Square is Zrinjevac Park with a notable fountain. 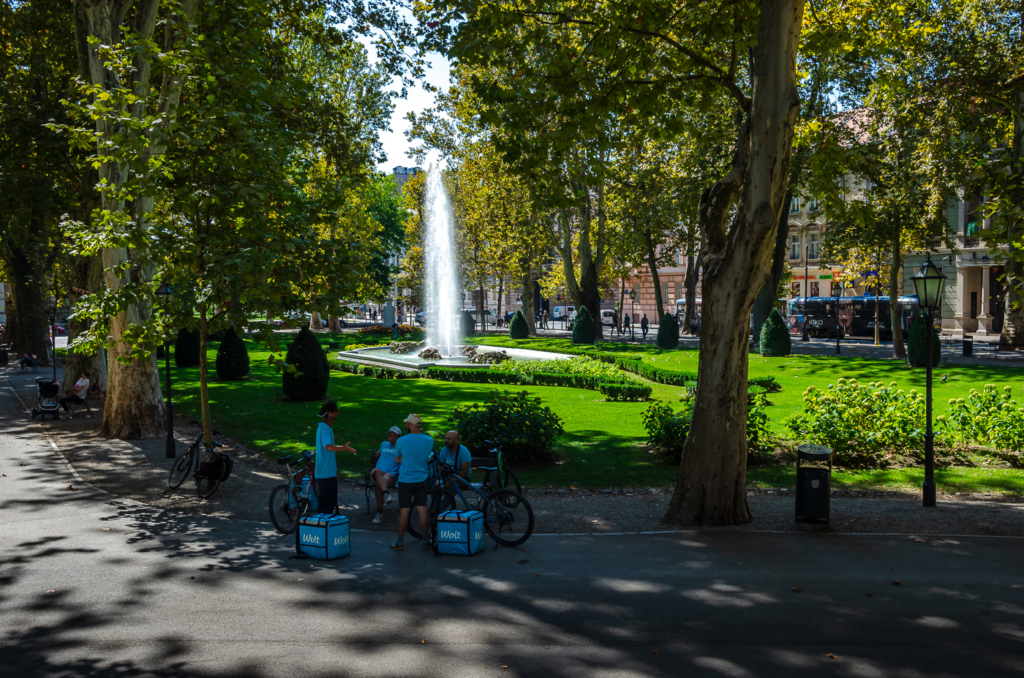 Another part of the network is the Botanical Gardens, which is perfect for relaxing and admiring the grounds surrounded by an urban setting. 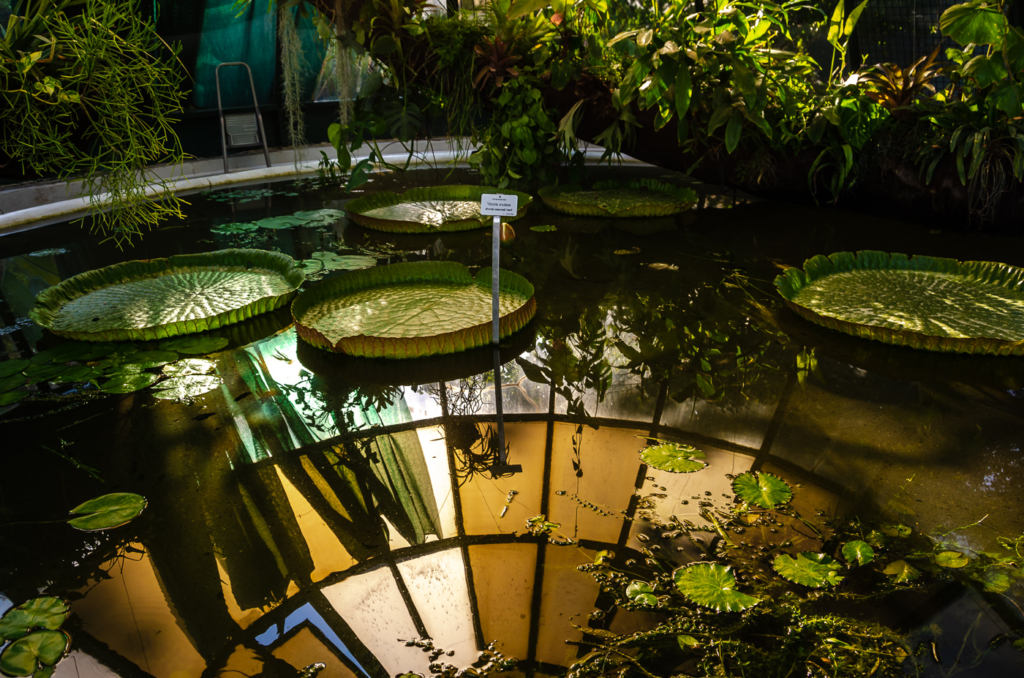 A booklet we picked up at the information center on Ban Jelačić Square listed twelve art and culture museums, as well as some novelty ones such as the Museum of Broken Relationships. Most were closed when we were there because of covid and damage from the earthquake.

Luckily the National Museum of Modern Art (aka Modern Gallery) was open. It’s located in a literal palace and has an exceptional collection of Croatian fine arts from the 1800s onwards. There were so many I liked, in so many styles and eras. Here’s just one: 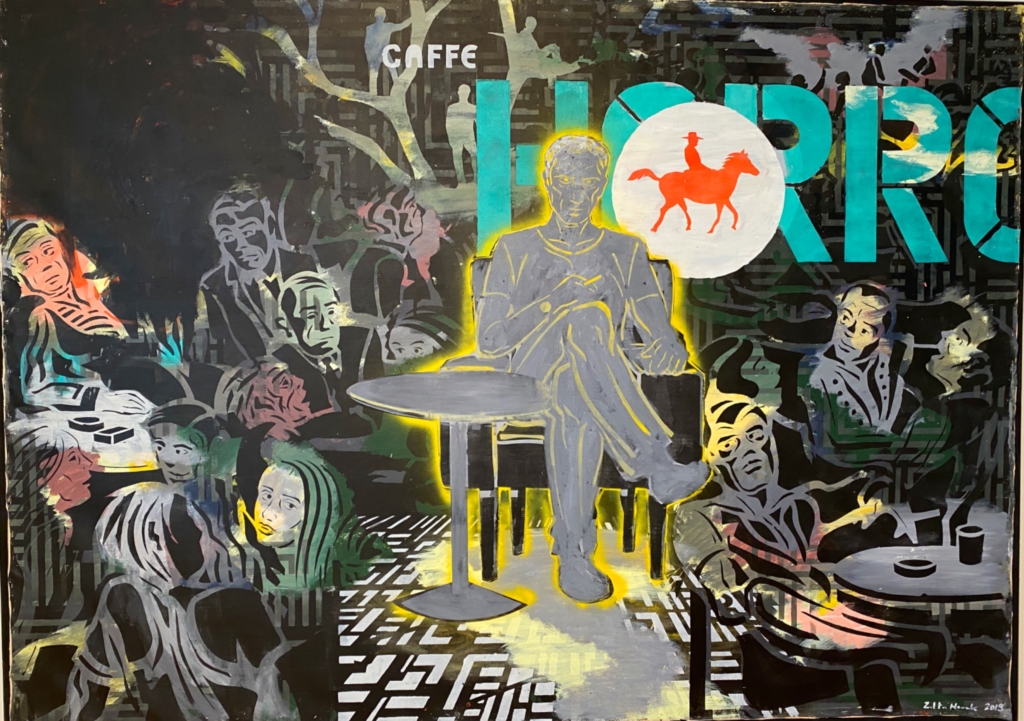 The Croatian National Theatre in Zagreb is the oldest cultural institution in Croatia, presenting opera, theater and ballet. While we were there, there were no inside performances. However, just seeing the building was a treat. 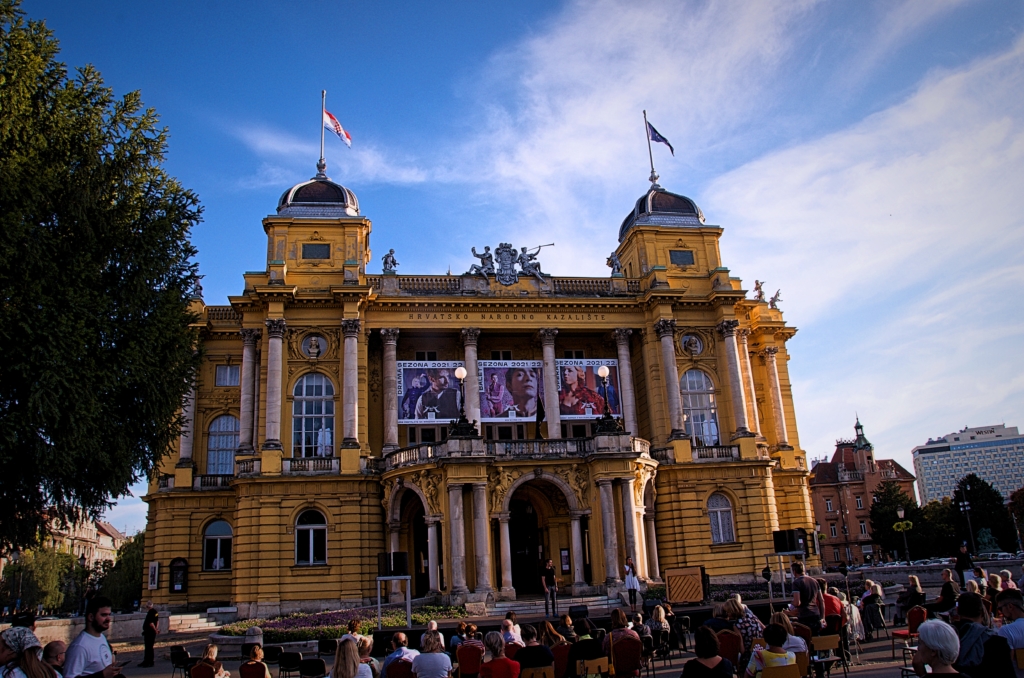 It’s easy not to appreciate the struggles over the centuries the country has endured to be independent. One reminder is a photo in the 1990s of a Croatiansoldier in a leather jacket with a heavy machine gun and Guns N’ Roses written on the wall behind him. Minutes after the photo was taken, a grenade hit the wall and only the word Guns remained. 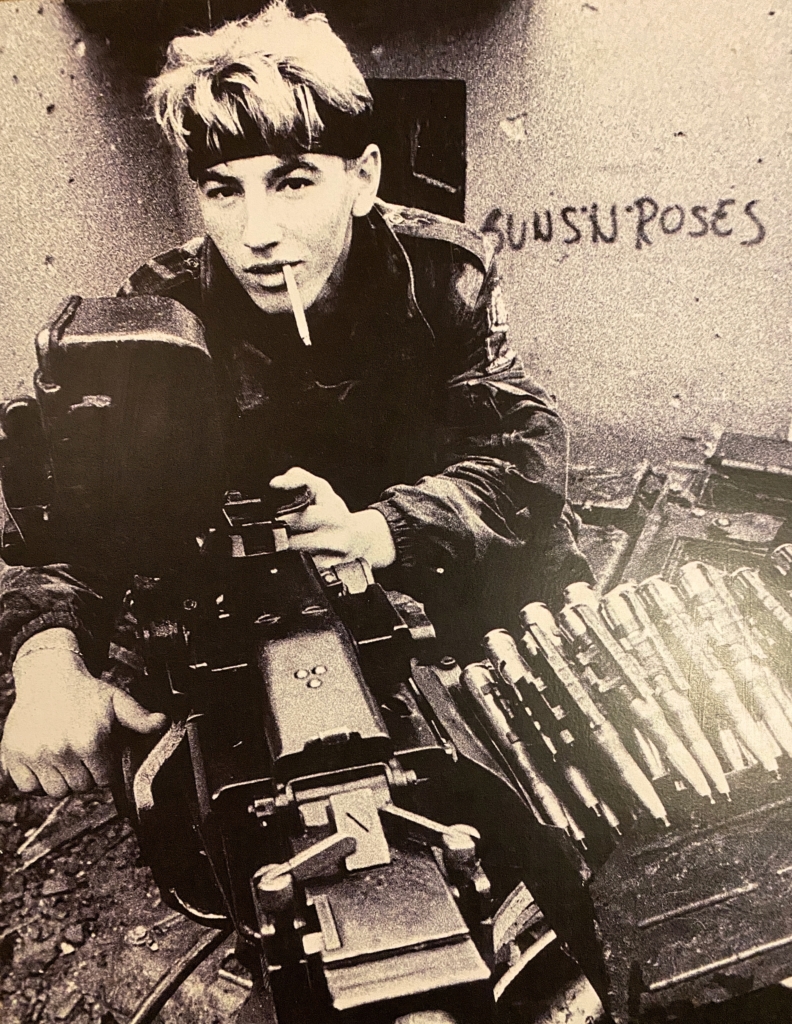 Thankfully, times are different now. As I mentioned at the beginning of this post, Zagreb is a real city where the residents are busy doing their daily activities. 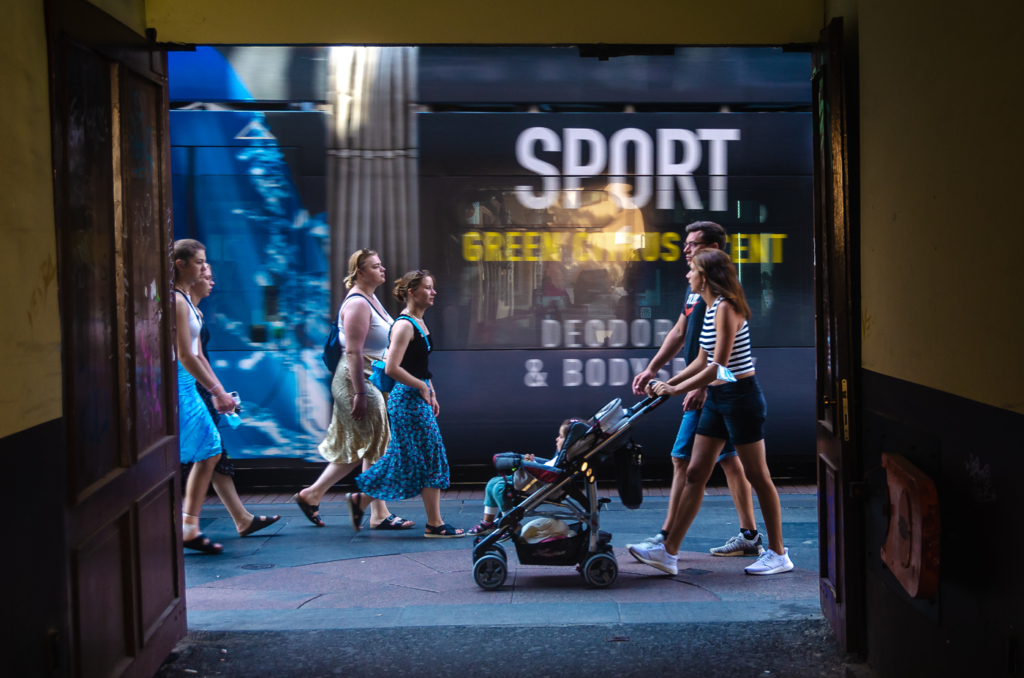 It’s a great place to people-watch… 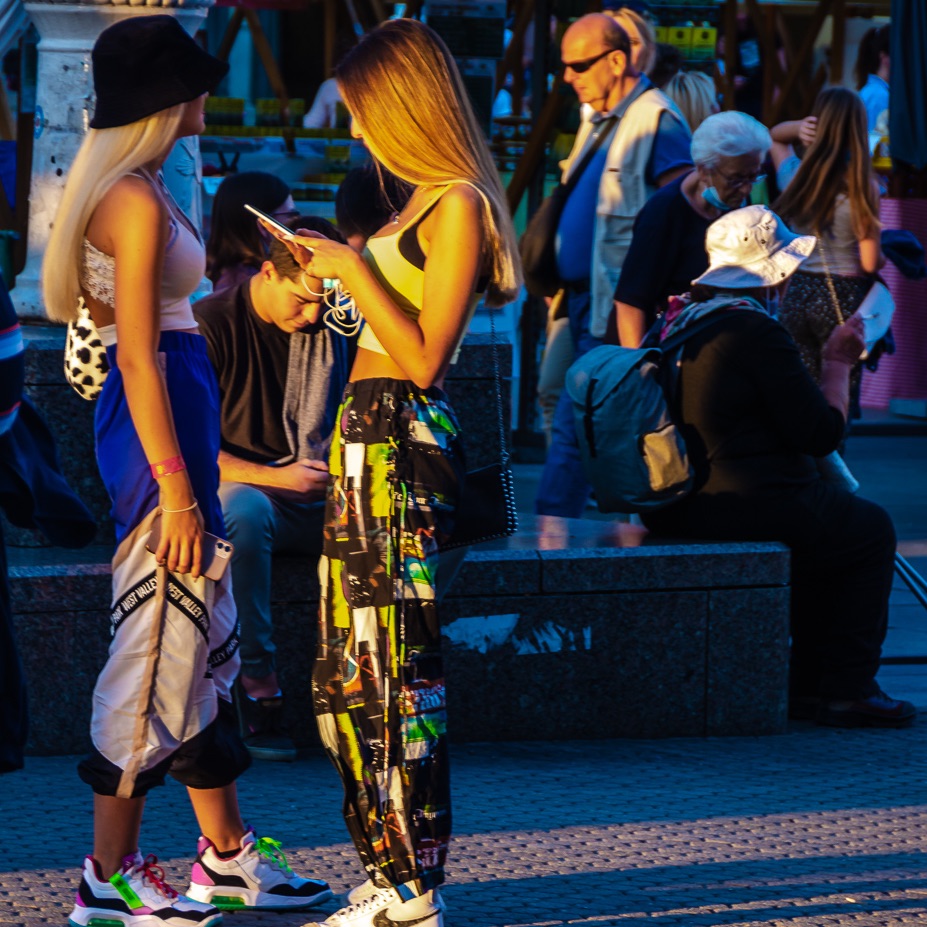 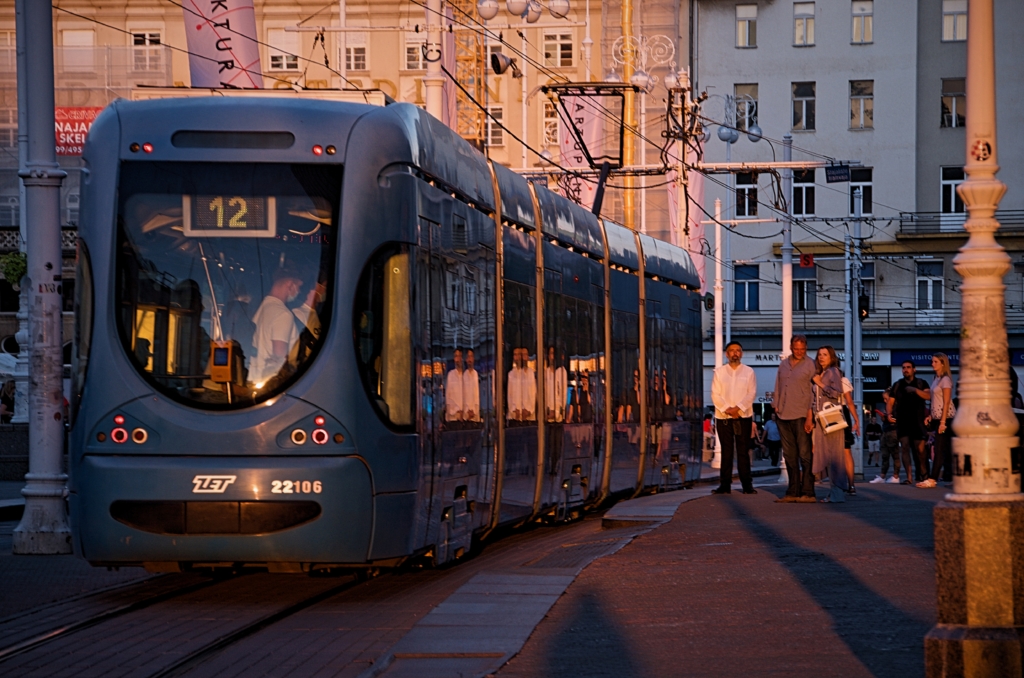 The city also has a visual appeal which attracted me. 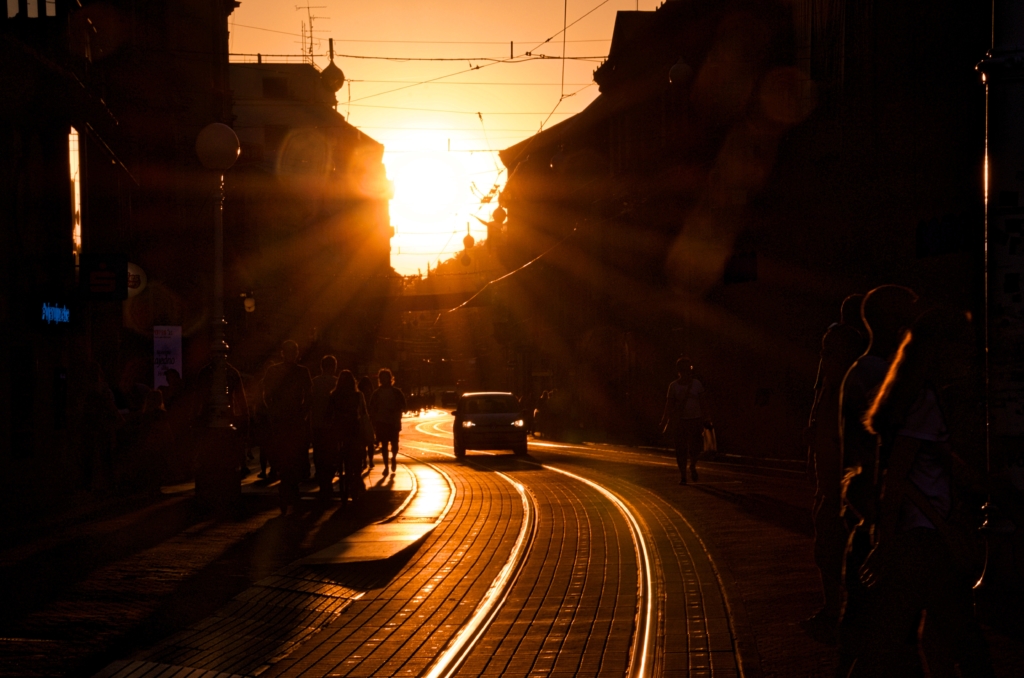 Zagreb was an unexpected treat for me, especially how it has intertwined the past with the present. It’s truly a great city that everyone should visit and experience its vibes. Now that I know something about Croatia, I look forward to further exploring the country when I return to tour the coast and islands of the Adriatic Sea.

You may also check out this interesting posts: