Bosnia and Herzegovina is a country on the Balkan Peninsula in southeastern Europe. Its countryside is home to medieval villages, rivers and lakes, plus the craggy Dinaric Alps. National capital Sarajevo has a well preserved old quarter, Baščaršija, with landmarks like 16th-century Gazi Husrev-bey Mosque. Bosnia and Herzegovina was part of the Kingdom of Yugoslavia. After World War II, it was granted full republic status in the newly formed Socialist Federal Republic of Yugoslavia.

Bosnia and Herzegovina has a largely mountainous terrain. The Dinaric Alps dominate the western border with Croatia, and numerous ranges, including the Kozara, Vlašic, Plješevica, Grmeč, Cincar, and Raduša, run through the country, generally in a northwest-southeast direction. Although situated close to the Mediterranean Sea, Bosnia and Herzegovina is largely cut off from its climatic influence by the Dinaric Alps. The weather in the Bosnia region resembles that of the southern Austrian highlands generally mild, though apt to be bitterly cold in winter. 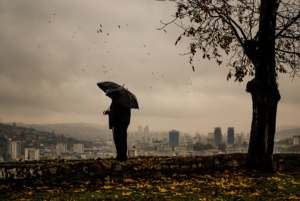