Greece is a country in southeastern Europe with thousands of islands throughout the Aegean and Ionian seas. Influential in ancient times, it’s often called the cradle of Western civilization. Athens, its capital, retains landmarks including the 5th-century B.C. Acropolis citadel with the Parthenon temple. Greece is considered the cradle of Western civilization, being the birthplace of democracy, Western philosophy, Western literature, historiography, political science, major scientific and mathematical principles, theatre and the Olympic Games.

The Mediterranean climate of Greece is subject to a number of regional and local variations based on the country’s physical diversity. In winter the belt of low-pressure disturbances moving in from the North Atlantic Ocean shifts southward, bringing with it warm, moist, westerly winds. As the low-pressure areas enter the Aegean region, they may draw in cold air from those eastern regions of the Balkans that, sheltered by the Dinaric mountain system from western influences, are open to climatic extremes emanating from the heart of Eurasia. 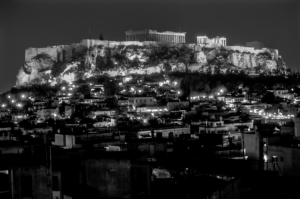